Atrial septal defect (ASD) is the third common cause of congenital heart disease. Amplatzer septal occluder (ASO) is a double-disc, self-expandable, occlusion device, which is made of nickel-titanium-alloy and approved for percutaneous closure of secundum ASD. However, the efficacy of ASO on ASD in animals remains unclear. This study intends to investigate the effect and molecular mechanism of ASO treatment on ASD closure in beagles.

mRNA and protein expression of HERG, Mink, Kir2.1 or Kir2.3 genes in the right atrium tissues of beagles was analyzed by quantitative real-time PCR or Western blot. The localization of Connexin 40 (CX40), CX43 or Collagen type I (Col I) in the right atrium tissues was determined by immunohistochemistry assay. Fibrosis of atrial tissues was examined by Masson trichrome staining. Electrophysiological parameters of atrial tissues including ERP HRA, CSp or CSd were profiled using a programmable electrical stimulator.

ASO has potent therapeutic effect to treat ASD in beagles.

Atrial septal defect (ASD) is recognized as congenital cardiac anomaly with defect in the septum between the two upper chambers (atria) of the heart, and becomes the third common cause of congenital heart disease (CHD),1-2 leading to about 25% mortality.3 Most of ASD is ostium secundum defect accompanied with mitral valve prolapse,4 the right ventricular failure, atrial arrhythmia, paradoxical embolization and pulmonary hypertension. The American Heart Association recommends closure of ASD in patients with right heart volume overload to decrease the mortality.5-6 Although ASD is very common in human; only 0.2% ASD cases happened in other mammals. In dog, most ASD cases exhibited left-right atrial shunting, contributing to pulmonary hypertension.7 Interesting, similar symptoms were observed in humans.8

With the development of cardiac catheterization and other interventions, ASD closure now become a routine performance served as a percutaneous approach under echocardiographic guidance. ASO is a double-disc, self-expandable, occlusion device, which is made of nickel-titanium-alloy and approved for percutaneous closure of secundum ASD by the US Food and Drug Administration in 2001.9-10 However, the efficacy of ASO on ASD in animal such as beagles remains to be determined. The molecular architecture of ASD involves down-regulated genes related to heart atrial septum formation, cardiomyocyte proliferation, and normal electrical conduction and muscle contraction, such as HERG, Mink, Kir2.1, Kir2.3,11 CX40 (Connexin 40) and CX43 genes. Those genes are involved in the formation of gap junction, iron channels and pacemaker activities, contributing to normal electrical conduction and coordinated synchronous heart muscle contraction,12 Whether ASO implantation in animal affect the expression of those genes is not clear. Here, we explored the therapeutic effect and the mechanistic action of ASO on ASD in Beagle dogs.

ASD model was established in young female beagles (n=30, 20-23 kg/beagle) by trans-septal puncture and subsequent balloon dilation of the interatrial septum under fluoroscopy and intracardiac echocardiography (ICE) using the AcuNav system (Acuson, Siemens Inc., Mountain View, California).13-14 The beagle dogs were anesthetized through an intravenous bolus infusion of 10 mg/kg ketamin and intramuscular injection with 5 mg/kg phenobarbital. Animals then underwent 8F Mullins transseptal sheath; and brockenbrough needle was placed into the superior vena cava by right anterior oblique projection. The puncture site was selected in the right anterior oblique in 45-degree position. After puncture needle was withdrawn, a steel wire was delivered to the left atrial, and heparin was administered. An appropriate occluder was selected; a push rod was used to clamp the circular loop of occluder at the right atrial through the loaded catheter. The fixed screw was tightened in the rear to close the jaw. The use of beagles was approved by the Animal Ethics Committee, Guizhou Provincial People’s Hospital in China.

One month after the establishment of ASD models, beagles were anesthetized as described above, and ASO (Huayi Shengjie, Beijing, China) device was implanted into beagles with ASD (n=10 per group) following the instruction from the company. Balloon sizing using the stop-flow technique was required. Device size was equal to the diameter of the defect determined by balloon sizing or 1 device size larger if identical device size was not available. Transthoracic echocardiography (TEE), or ICE was performed to assess septal rims, balloon sizing, and stability of the device.

The effective refractory period (ERP), which is the longest S1-S2 interval that fails to cause atrial depolarization, was measured by pacing in the proximal of CS (CSp), distal of CS (CSd) and HRA using a programmable electrical stimulator. Extra-stimuli were introduced at premature coupling intervals (S1–S2) by progressively shortening with 10-min pacing cycle length until atria failed to depolarize. The pacing cycle length was then progressively increased by 5 min until it caused atrial depolarization.

Beagle AW, PW and LW tissues were fixed in 4% paraformaldehyde. Coronal sections (4 μm) were cut and processed for immunohistochemistry. Tissue slices were reacted with anti-CX40, CX43 or Col I primary antibodies (Abcam, USA) (1:100 dilution) for overnight. After wash with PBS, the slices were incubated with Alexa Fluor 594-conjugated secondary antibodies (Invitrogen, USA) (1:400 dilution) for 60 min at room temperature. The slices were finally photographed under a BX51T-PHD-J11 fluorescence microscope (OLYMPUS, Tokyo, Japan) and analyzed with Image-Pro plus 4.5 software (Media Cybernetics, Rockville, MD, USA).

To examine the therapeutic effect of ASO on ASD, we established beagle ASD model and implanted ASO into the beagles. Intra-cardiac echocardiography on the right atrium demonstrated that beagles with ASD had significant higher electrophysiological parameters including ERP HRA, CSp and CSd in comparison with control beagles without ASD (Table 2). In contrast, ASO treatment robustly reduced ASD-triggered electrophysiological responses in beagles, with significant lower HRP, CSp and CSd values in comparison with the ones without ASO treatment (ASD group) (Table 2).

To examine ASO-induced molecular signature in the right atrium tissues of beagles with ASD, we profiles the expression of ion channel related genes HERG (Figure 1A), Mink (Figure 1B), Kir2.1 (Figure 1C) and Kir2.3 (Figure 1D). qRT-PCR demonstrated that beagles suffered from ASD had significant lower levels of mRNA transcripts in the anterior wall (AW), the posterior wall (PW) and the lateral wall (LW) of the right atrium tissues in comparison with the ones in control group (Figure 1A-D). However, beagles received ASO treatment (ASO group) had significant higher mRNA expression of HERG, Mink, Kir2.1 and Kir2.3 genes in the tissues (Figure 1A-D). Western blot further confirmed that ASO implantation significantly enhanced the protein production of the four genes in AW, PW and LW of the right atrium tissues (ASO group) in comparison with the ones in ASD group (Figure 1E). 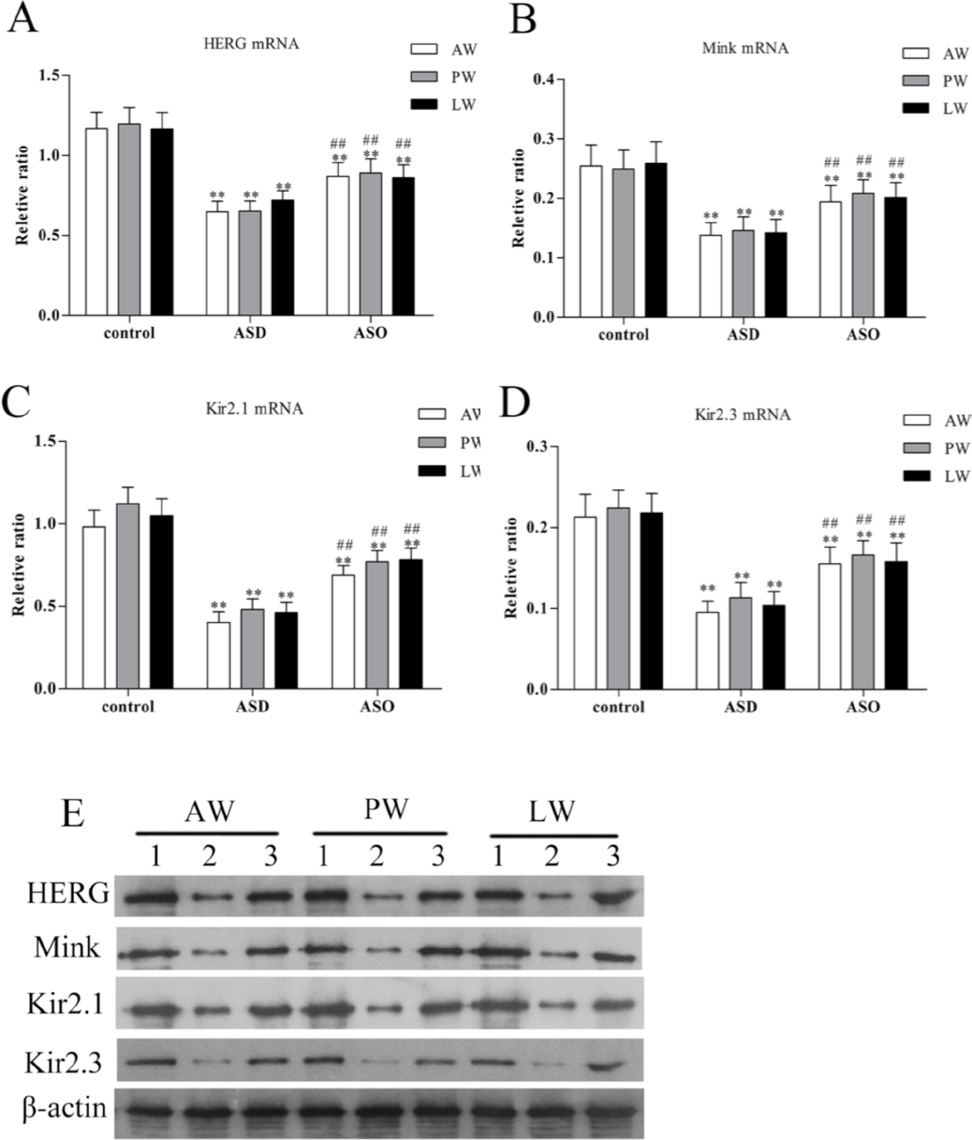 CX40, CX43 and Collagen type I protein expressions in the right atrium tissues. Anterior wall (AW), posterior wall (PW) or lateral wall (LW) tissues slices of the right atrium from beagles in control, ASD or ASO-treated group were immunohistochemically stained with specific antibodies against CX40 (A), CX43 (B) or collagen type 1 protein (C). Stained tissues were photographed under a microscope (20×). Data were representatives from three independent experiments.

To further examine the effect of ASO on atrial wall fibrosis, we performed masson trichrome staining on the tissues harvested from treated or control beagles. Histological staining demonstrated that beagles with ASD had severe fibrosis in AW, PW and LW of the right atrium tissues compared to control beagles without ASD (Figure 3). However, after ASO implantation, the fibrosis degree of AW, PW and LW of the atrial tissues in treated beagles robustly decreased in comparison with the ones without ASO treatment (Figure 3). 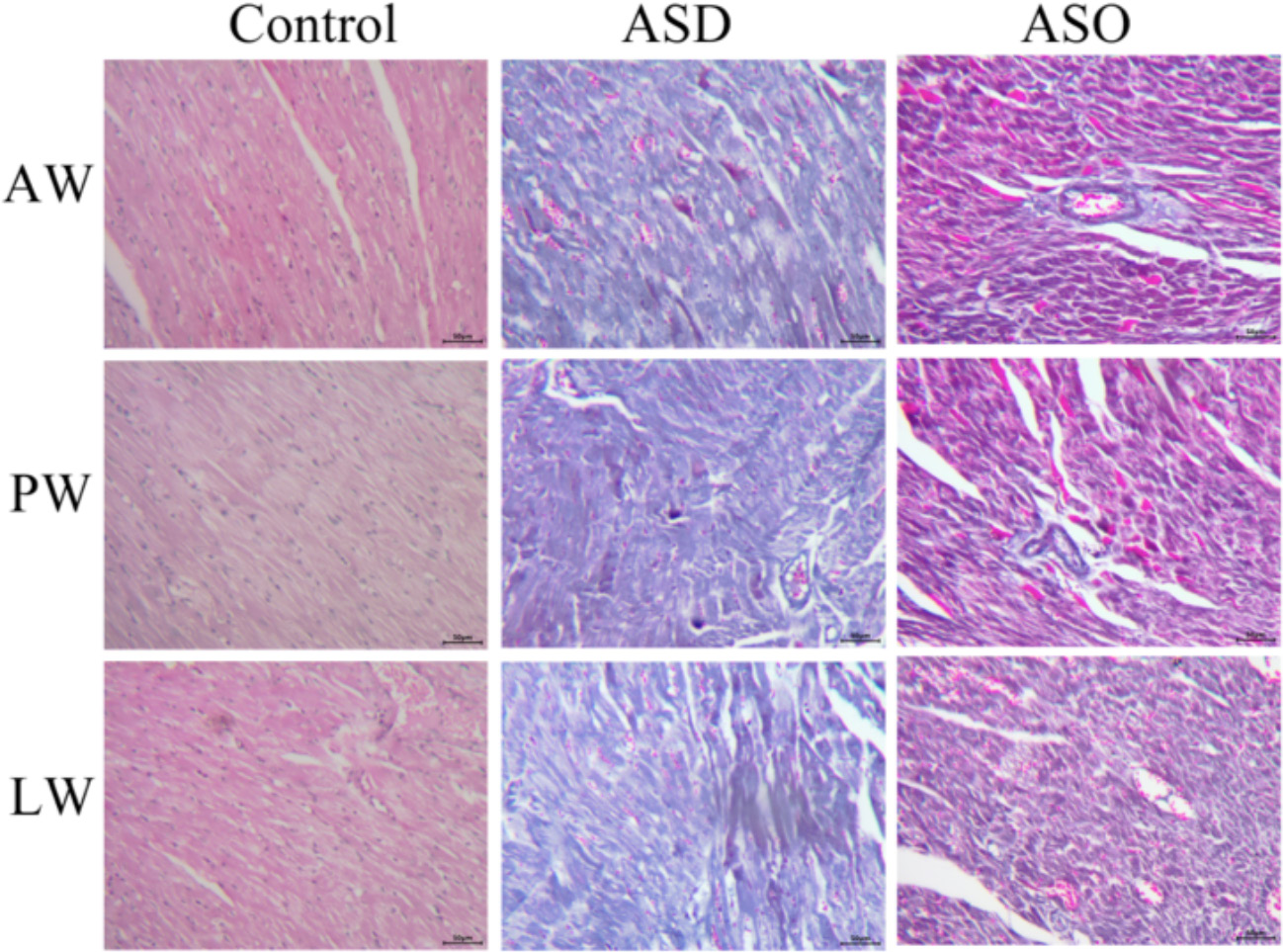 In this study, we demonstrated that ASO has a therapeutic effect on ASD in beagles by enhancing the expression of HERG, Mink, Kir2.1 and Kir2.3 genes and inhibiting the production of CX40, CX43 and collagen type 1 in the right atrium tissues. To our knowledge, it is the first report that ASO can be utilized to effectively treat ASD in beagles.

ASD is associated with mutation in cardiac transcription factor genes such as TBX3 (T-box factor 3), TBX5 and GATA4,16 and linked with a panel of genes related to iron channel, pacemaker activity, and cell-to-cell conduction and atrial fibrosis. TBX3 and TBX5 promote pacemaker activity through repression of CX40 and CX43 genes expressed in fast conductance tissue of the ventricles and atria.17 TBX5 and GATA4 are required for atrial septum formation; deletion of TBX5 results in fully penetrant, dose-dependent atrial septal defects.16 Recent research indicated that gap junctions could determine the cell-to-cell conduction properties.18-19 Gap junctions are clusters of transmembrane channels that link the neighboring cells in plasma membranes, forming the low-resistance pathways for transmitting the action potentials which stimulate contraction.20-22 Each channel consists of two hemichannels (termed connexons).23 In the human heart, CX40 and CX43 are major myocyte gap junctions expressed in a distinctive tissue and chamber-related pattern.24 In our study, protein expression of CX40 and CX43 were significantly increased in ASD group. After ASO treatment, the expression of both CX proteins robustly decreased in atrial tissues. Moreover, ASO treatment markedly inhibited protein expression of fibrosis-related gene collagen type 1; conversely, ASO treatment promoted mRNA or protein expression of ion channel-related genes HERG, Mink, Kir2.1 and Kir2.3 in vivo, consequently improving the suggesting that ASO has broad molecular functions to attenuate the pathogenesis of ASD in beagles.

Endocardial mapping technique plays an important role to explore the electrophysiological process involved in the arrhythmia.25-26 Our study revealed a significant difference in refractory periods of ASD group compared to ASO group or control group. Effective refractory periods in different sites of the right atrium were significantly longer in ASD group than in ASO group or the control group. Those results suggest that ASD might be induced by the heterogeneous texture of right atrium or critical changes (prolongation) of refractory periods. Early studies showed that some amount of cardiac erosion or perforation occurred during late follow-up and are potentially life-threatening, which makes its long-term safety questionable.27-29 Transcatheter closure of secundum ASD has been shown to be safe and effective in patients with right heart volume overload, and has the similar success and complication rates compared to surgery.30-31 Our result that ASO significantly improves ERP HRA, CSp and CSd in ASD beagle model provides a better knowledge of atrial electrical remodeling, suggesting that ASO could be utilized as an effective tool for the treatment of atrial arrhythmias in ASD.

We have demonstrated that ASO has the capability to reduce ASD-triggered electrophysiological responses and CX40, CX43 and collagen type I expression, enhance ion channel-related gene expression, and attenuate atrial tissue fibrosis. We propose that ASO has potent therapeutic effect to treat ASD in beagles.

This study was supported by the National Natural Science Foundation of China (Grant number 81260034).

All authors disclose no conflicts of interest.

the distal of CS

the proximal of CS

We have investigated the effect and molecular mechanism of ASO on ASD closure in beagles. Our results showed that ASO treatment significantly increased the expression of of HERG, Mink, Kir2.1 and Kir2.3, and inhibited CX40, CX43 or Col I expression in the right atrium of beagles. Moreover, ASO treatment significantly reduced ERP HRA, CSp or CSd, and inhibited atrial wall fibrosis in treated beagles. We expect that ASO has potent therapeutic effect to treat ASD closure in beagles.