The arterial conduits in coronary artery bypass grafting CABG surgery using bilateral internal thoracic arteries BITA have conferred popular acceptance for special characteristics they have that implicated in better long-term patency rates than other conduits. The radial artery RA may consider an equivalent to Right ITA as a second conduit. The vein graft patency limits the long-term patency and free event survival. Total arterial revascularization TAR is expected to be beneficial for long-term outcome.

The aim of this review is to evaluate our initial experience in using total arterial conduits in selected patients.

Cross-sectional study was conducted in Ibn Al-Bitar hospital during 2 years, 2015 – 2016. Twelve patients were selected to receive TAR, 11 were males and 1 was female. Their ages ranged from 37 - 59 years, mean 46.8. No major risk factor for sternal infection was present in the selected patients apart from controlled non-insulin dependent diabetes mellitus NIDDM.

Seven patients received TAR. Still, five patients had saphenous vein graft SVG in addition to achieve complete revascularization. Left internal thoracic arteries LITA have always used as pedicle. Right internal thoracic artery RITA used as pedicle or in situ artery in 2 cases and as a free graft in 8 cases. No postoperative complication reported apart from re-exploration in one case due to postoperative bleeding. No sternal wound infection. No early or intermediate mortality was reported for follow up period ranging from 4 months - 2 years. All patients were free of ischemic events during follow-up period.

In conclusion, the TAR is a feasible approach with satisfactory results in selected patients.

The internal thoracic artery ITA has peculiar characteristics that make it a better arterial conduit for coronary artery bypass grafting CABG with patency rates as high as 80% in third decade after surgery.1 The right ITA (RITA) behaves in a similar way to that of left ITA (LITA).1 The ITA intima has a well-formed non-fenestrated internal thoracic lamina facilitating prevention of intimal hyperplasia and cellular migration. Its media layer is less muscular formed by a network of circularly and longitudinally interlacing elastic lamellae between which smooth muscle cells running in a spiral fashion. The endothelium has a property of higher basal production of nitric oxide and prostacyclin. In addition, the ITA reserves its ability to be adapted to the demand during exertion by increasing its laminar blood flow.2-4

On contrary, the vein graft patency reports as 88%, 75%, 50% at 1, 5, 12 years respectively.5-6 The radial artery RA may consider an equivalent to RITA as a second conduit. It has a lower vulnerability to develop stenosis than vein graft but higher than that of ITA.7-10 Its patency rate ranges from 83-93% after 1-7 years postoperatively.11

In that manner, the vein graft patency limits the long-term patency and free event survival.

The aim of this review is to evaluate our initial experience in using total arterial conduits in selected patients.

The patients had been assessed completely before surgery. On-pump coronary bypass surgery was conducted in a standard manner. Antegrade and retrograde St Thomas cardioplegic protection with mild hypothermia 340C was the standard. The RA was harvested from a non-dominant arm in skeletonized fashion. The antispasmodic solution used was comprised of papaverine 60 mg, 1 ml lidocaine 2%, 5000 IU heparin added to 200 ml isotonic saline. No specific antispasmodic medication postoperatively apart from routine use Calcium channel blocker for at least 6 months.

Intensive care unit stay was up to 48 h while hospital stay was ranged from 7-10 days. Follow-up was by clinic visit and telephone call.

Configurations of proximal and distal coronary anastomoses are shown in Figures 1 and 2. 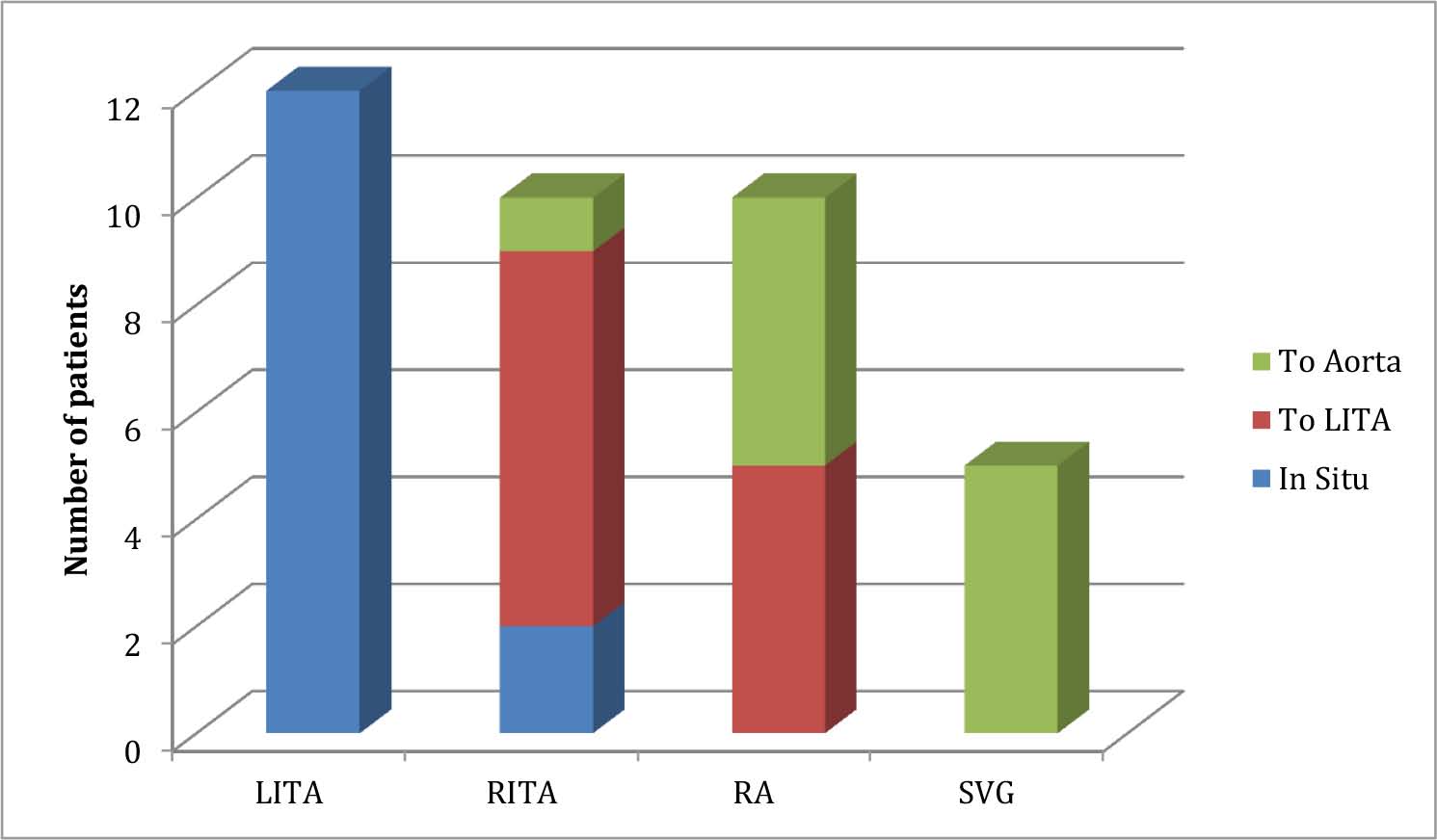 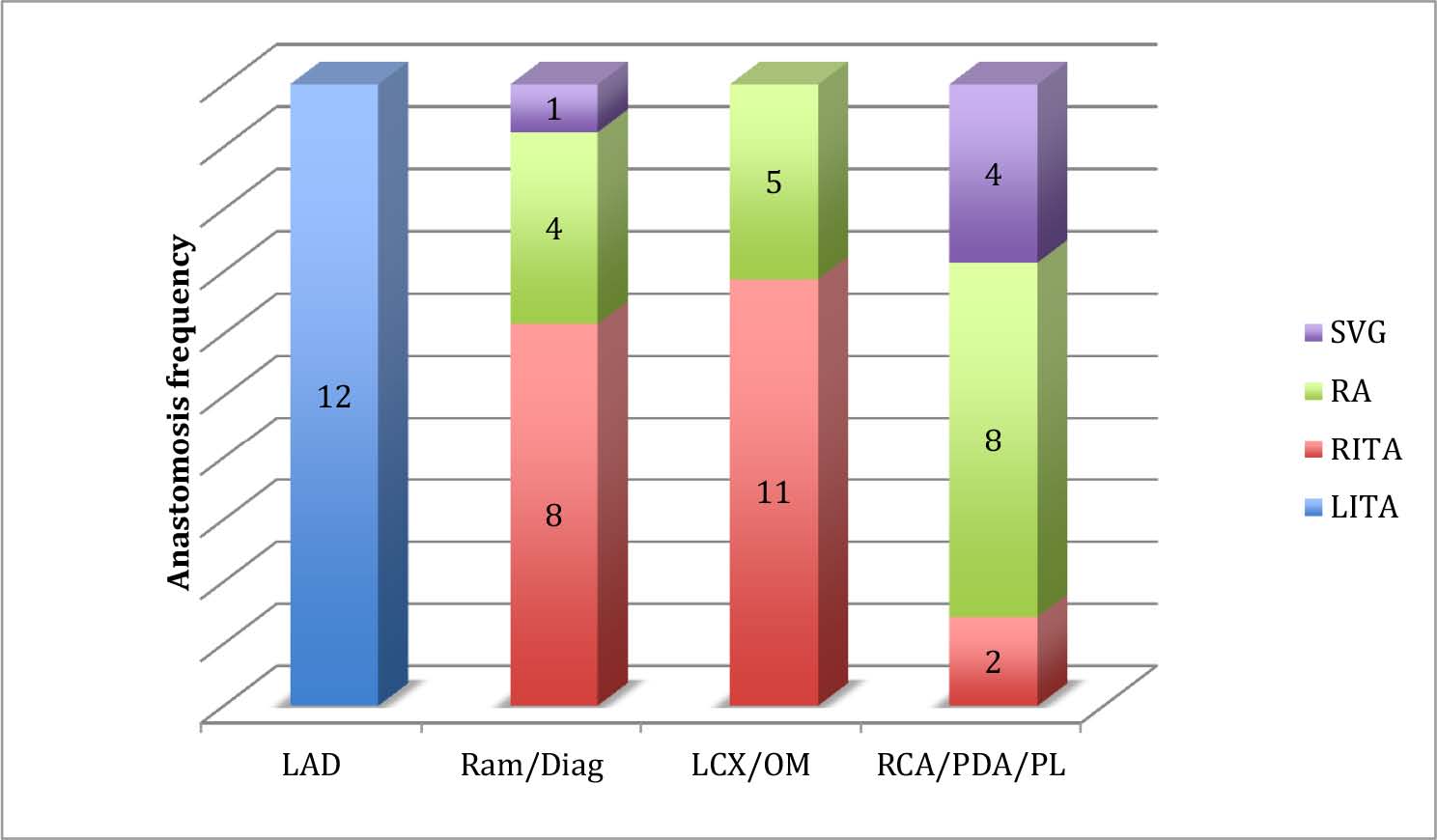 RITA was used as pedicle or in situ artery in 2 cases and as a free graft in 8 cases.

All patients were free of ischemic events during follow-up period.

The arterial conduits in CABG surgery using bilateral internal thoracic arteries BITA have conferred popular acceptance for special characteristics implicating in better long-term patency rates compared with other conduits. However, the sternal complications that comprise non-union and deep wound infections are the primary concern about bilateral harvesting of ITA. The complications were reported to be higher in BITA grafting than using single ITA (SITA).13

Sternal circulation can be diminished with the harvesting leading to sternal dehiscence13 especially after using both ITA. Diabetes mellitus, BMI more than 35, severe COPD, exposure to radiotherapy and immunosuppressant14 consider as risk factors that contribute to the raising incidence of this complication. However, simultaneous presence of more than one risk factor may increase worrisome of contraindication.

In this review, we judiciously selected our patients and excluded uncontrolled DM or insulin dependent diabetes mellitus IDDM patients from this type of surgery. Still, five out of 12 patients had controlled NIDDM. We experienced no infection in those patients.

Pevni et al.15 had compared the outcome of BITA grafting to that of SITA grafting in 1528 diabetic patients. The mean follow-up was 12.2 ± 4.3 years. The two groups had similar operative mortality (2.6% BITA versus 3.0% SITA) and sternal infection (3.1% versus 3.9%, respectively). 10-year survival of the BITA group was better than that of the SITA group and was not significantly different between the matched groups; however, the Cox-adjusted survival of the BITA patients was better.

Gatti et al.16 mentioned that diabetic had higher risk profiles than non-diabetic patients with BITA grafting i.e. use of adrenergic agonists, postoperative bleeding, deep sternal wound infection and means of longer hospital stay. However, it did not impact on hospital mortality, 2.2% versus 1.8%, p=0.52.

The vascularity of sternum after harvesting depends only on collaterals.18 In some patients these collaterals would not appear to be at risk with harvesting. Other subtypes due to different ITA branching patterns the collateral supply is at high risk for disruption.13

In spite of small statistical sample in this review, we suggest that the key point in harvesting methods is to preserve the collaterals, trying to apply clips close to the artery and do not use excessive cauterization but rapid interrupted spark to cut the branches. Still, Skeletonization of one of ITA may be beneficial. Benedetto et al.19 reported odds ratio of sternal wound complication 1.8 with pedicled BITA, while ratio was 1 with skeletonized BITA and 0.89 with skeletonized SITA. We lack comparison groups to determine a better way of harvesting BITA.

There is no specific anatomical configuration apart from use the general rule: in situ LITA to LAD. It makes no difference whether to use RITA as pedicle or as a free graft. Regarding RA graft, we try to avoid bypass in less than 90% stenosis to RCA.

The beneficial early and late outcomes with the using BITA or TAR concept have proved by several studies. Tatoulis and his colleague21-22 showed that the early mortality was less in non-diabetic patients submitted to TAR than non-TAR groups (0.8 versus 1.8 % respectively) while it was nearly similar in diabetic patients (1.2% versus 1.4% respectively). However, the late mortality would be less with TAR than non-TAR (0.8% versus 1.8%) and in diabetic patient undergoing TAR it was 10.2 % versus 12.2 %. Long-term prognostic benefit better in diabetic too. Kaplan –Meier survival for 4.9 years follow-up was better in TAR patients 97.2, 91.3, 85.4 % versus 96.5, 90.1, 81.2 % at 1, 5, 10 years respectively

Shi et al.26 proved that BITA whether in situ or free graft would give greater survival over SITA and RA.

In conclusion, the TAR is a feasible approach with satisfactory results in selected patients despite of our small sample and relatively short follow-up period.