Transient stress lymphocytosis is an under recognized acute self limiting entity characterized by absolute lymphocyte count ALC > 4x109/Lt , frequently seen in cardiac and obstetrical emergencies, nonsurgical traumas, epilepsy etc. this study aims to analyzed the clinic-pathological features of the patients of TSL in a tertiary care Cardiology institute in North India.

A total 142 cases were evaluated with a follow up of 15 days detail clinical history, examination finding, biochemical and hematological investigations and where ever possible the immunophenotypic data were analyzed and in 122 cases ALC returned to normal level followed by proportionate increase in neutrophil and platelet count. On immunophenotyping there was increase in all subset of lymphocyte including T cell, B cell and NK cell.

Contrary to the expected neutrophilic response, a few acute stress full conditions are known to be associated with absolute lymphocytosis that is transient type and most often ignored by the treating clinician as many time in subsequent investigations the ALC was found to be normal. Usually this condition is associated with poor outcome.

Transient stress lymphocytosis (TSL) also known as transient absolute lymphocytosis(TAL) is an acute self limiting condition frequently seen in viral infections particularly infectious mononucleosis caused by Epstein Barr Virus. While chronic cases may represent a lymphoproliferative disorder or may be a manifestation of chronic disease like tuberculosis, brucellosis or secondary syphilis.1

Normal range of absolute lymphocyte count (ALC) is age dependent and in adult ALC is defined when lymphocyte count is more than 5 × 109/ Lt.2 TSL is a relative uncommon phenomenon seen in medical emergency conditions like nonsurgical trauma, obstetrical emergencies, cardiac emergencies, sickle cell crisis, abdominal emergencies, epilepsy and post adrenalin injection and lasting for less than 24 hr in majority of cases.3,4,5,6 Many previous studies have suggested that stress induced lymphocytosis is associated with relatively unfavorable prognosis.3,5

This study analyzes clinic-pathological and immune-phenotypic data retrospectively and prospectively the patient admitted in a tertiary care Cardiology institute in North India in duration of one year.

A total 10300 cases were evaluated from a period of September 2015 to August 2016, out of which 142 cases of newly diagnosed absolute lymphocytosis were evaluated. Patients having absolute lymphocyte count over 4000/microliter (4.0x109/Lt) were evaluated over a follow up of 15 days. Detailed clinical history, examination finding and biochemical investigations obtained from hospital records were analyzed. Complete blood counts (CBC) at the time of admission and subsequently thereafter were evaluated. Immunophenotypic data of five patients were available for analysis.

Blood samples were collected in EDTA anticoagulant. The CBC data was obtained by using a Medonic M series analyzer in the laboratory of the hospital itself.

Blood smears were prepared and stained by Leishman stain and the prepared smears were evaluated for the morphology of lymphocytes and other parameters.

The immunophenotyic analysis was done to know the subset of lymphocyte population.

A total 142 cases with absolute lymphocytosis were evaluated out of which 81 cases were male and 61 were female with a mean age of presentation was 59.6 year (range 29 year to 98 year) (Table 1)

Age and sex distribution of cases

Out of 142 patients 96 cases were diagnosed with myocardial infarction, 35 cases with cardiac arrest, 7 with heart failure and 4 with acute pulmonary edema.

CBC data were analyzed within 6 hr, 24 hr, 48 hr, 72 hr and one week after admission. On CBC data analysis it was observed that total leucocyte count (TLC) was raised due to raised Absolute neutrophilic counts (ANC) and absolute lymphocyte counts (ALC) both. Randge of ALC varies from 4000- 12400 / microliters.(Table 2) On follow-up it was also observed that there is continuous downfall in ALC and then return to normal reference range in 122 cases within 72 hrs and rest 20 cases in one week. Simultaneously downfall in ALC is accompanied by proportionate increase in ANC and an increase in platelet count.

Hematological profile of the patients (n-142)

On peripheral blood examination, the lymphocytes were of varied morphology ranging from normal, atypical, plasmacytoid to pleomorphic resembling lymphoma cell. Majority of the cases (98 cases) the lymphocyte resembles the normal lymphocytes which were small to medium sized with a slight decreased nuclear cytoplasmic ratio and occasional granules in cytoplasm. (Figure 1a) 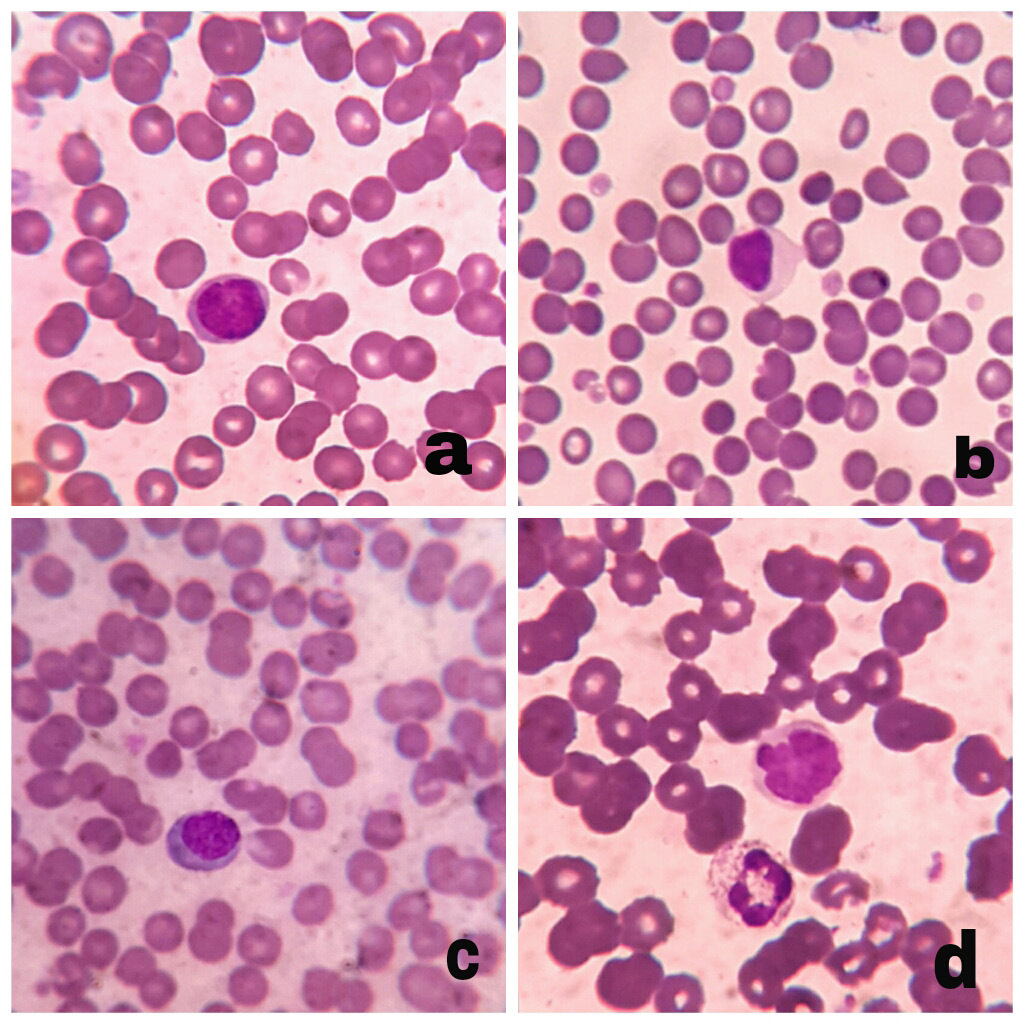 36 cases demonstrated reactive features in which lymphocytes were having abundant cytoplasm with irregular cytoplsmic borders. (Figure 1b)

Immunophenotyping was available in 5 cases which demonstrated that there is increase in all subset of lymphocytes including T cell, B cell and NK cells. CD 4 and CD 8 cells with CD 8 cell being high than CD 4 cell so CD4/CD8 ratio was reduced. Immunophenotypic analysis was repeated after resolution i.e. after 7 days demonstrated significant reduction in all subset of lymphocyte including T cell, b cell NK cell as well as both CD4 and CD 8 cells also.

In acute and stress-full condition a neutrophilic response is expected but this is not always true. Some stressful and medical conditions this neutrophilic response is rather preceded by absolute lymphocytosis that is to a transient type and at resolution this ALC is followed by proportionate increase in ANC. This explain the phenomenon of mobilization of neutrophils as a first line of innate defense associated with transient cytokine mediated mobilization of lymphocytes.7

TSL is a under-diagnosed and under recognized clinic-pathologic condition also known as transient atypical lymphocytosis , may be defined as a lymphocyte count greater than 4x109/lt, lasting usually less than 24 to 48 hr and usually following an acute stress full condition like Cardiac, medical and obstetric emergencies and trauma.3,4,5,6

In our study we analyzed a detailed clinical hematological and phenotypic (where ever possible) parameters in newly diagnosed patients of TSL in cardiac emergency at a tertiary cardiac care Institute in north India.

All the patients had an acute clinical picture and on follow up TSl is followed by fall in lymphocyte count within 6 hr to168 hrs (1 week) (median 36 hr) This correlate with other previous studies.3,4,5,6