Myocardial infarction is the leading cause of death and disability worldwide. Nuclear perfusion scintigraphy is the gold-standard technique, which is highly specific in differentiating viable from scarred myocardium in patients of myocardial infarction. Dysfunctional myocardium with areas of residual viable tissue may show functional recovery after revascularization. The aim of this study was to determine the effectiveness of Cardiac MRI in detecting viability of myocardial tissue as compared to 99m-TC Sestamibi perfusion scan in patients with myocardial dysfunction who were awaiting revascularization procedures.

Both the techniques detected trans-mural myocardial infarcts at similar rates. However, cardiac MRI was able to detect sub-endocardial infarcts in 33% cases, which were totally missed on nuclear perfusion imaging. MRI was found to be more sensitive than nuclear perfusion scans for detecting sub-endocardial infarcts. The sensitivity of delayed hyper enhancement cardiac MRI for detection of viable myocardium was 100 % with a specificity of 47.83 %. The positive predictive value of the modality was 61.29 % with a diagnostic accuracy of 71.43 %.

Contrast enhanced MRI was found to detect sub-endocardial infarcts at a higher rate and has high sensitivity in the detection of viable and irreversibly damaged myocardium in comparison to nuclear perfusion scans.

Myocardial infarction is the leading cause of death due to ischemic heart disease (IHD) in India and is also one of the most common causes of morbidity worldwide.1 Previously only people living in high income group countries were primarily thought to be affected by IHD, but recent studies and data confirm that IHD is the leading cause of death and disability in low and middle income countries which includes India, and the rates are increasing disproportionately when compared to those in high-income countries.2 In 2010-2013 itself, IHD accounted for 23 % of total and 32 % of all deaths in adult population in India.3 The “Global burden of disease study”, estimate of age standardized cardiovascular death rate of 272 per 100,000 population in India is higher than the global average of 235 per 100,000 population.4 Following myocardial infarction, prolonged ischemia and subsequent reperfusion can lead to myocardial inflammation and severe tissue damage by several immune mediated mechanisms.5 These cellular changes prime both the infarcted and non-infarcted cardiomyocytes for progressive ventricular dysfunction that eventually leads to a decline in function and heart failure.6,7 An early intervention at the time of reperfusion after the onset of acute MI has been shown to limit infarct size and restore blood flow in the ischemic tissue.5

“Myocardial Viability” is a concept which is based on the premise that in patients who have suffered myocardial infarction, even severely dysfunctional myocardium with areas of residual viable tissue may show functional recovery after revascularization.8 Differentiation of reversible and irreversible injury to myocardial tissue is of prime importance, as an appropriate course of action depends on whether the involvement is already trans-mural or whether some or all of the ‘at risk’ region contains focal areas of viable tissues in myocardium, which may be endangered in case of a future ischemic episode.9 Reversal of myocardial contractility may be of relevance in patients with reduced ventricular function but viable myocardium, as revascularization procedures may significantly improve long-term survival in them. Recent advances in the field of medicine and cardiology per se have led to the availability of a variety of non invasive methods to assess myocardial viability such as Thallium-201 SPECT / 99m-TC Sestamibi perfusion scan, low-dose Dobutamine stress echocardiography, Cardiac 18-FDG-PET scan, contrast enhanced cardiac MRI (CeMRI) for delayed hyper-enhancement.

The present study was aimed to determine the effectiveness of contrast enhanced Cardiac MR (CeMRI) in detecting the viability of myocardial tissue as compared to Tc-99m Sestamibi perfusion scan in patients who have had myocardial infarction. A prospective observational clinical study was carried out comprising of a non-randomized sample of 42 patients (35 male and 07 females) of myocardial infarction (acute / chronic) in age group of 31 to 76 years with a median age 55.5 yrs, who presented to our tertiary care hospital and were awaiting coronary re-vascularization procedures. Necessary clearance from the institutional ethical committee was obtained and a written informed consent was taken from the patients at the time of their enrolment. The diagnosis of myocardial infarction was based on clinical signs and symptoms, typical ECG changes, cardiac enzyme markers (TROP-T and CK-MB) and ECHO findings. None of the patients had undergone coronary angioplasty or any other revascularization procedure before the study was performed. All the patients had no contraindication to MRI or to use of intravenous gadolinium contrast agents (i.e. contrast allergy / GFR < 30 ml/min). Patients having bundle branch block ECG patterns / unstable angina were excluded from study. The individuals enrolled for study were subjected to a complete medical history and clinical case record evaluation and the findings were noted down on a printed performa. Evaluation for myocardial viability was done by Tc-99m Sestamibi scan. The patients were then subjected to cardiac CeMR for demonstration of delayed hyper-enhancement.

The images produced were evaluated using vendor provided auto analysis software and PACS workstations and were analysed by a radiologist. The short-axis images were acquired and from these the heart was divided into three equal-sized regions (basal, middle, and apical) and sliced into 17 segments (based on the 17-segment model as proposed by Schiller et al.) Segment 17 was however not included for measurement of wall thickness due to high incidence of false positive results associated with its measurement. Various measurements were done as follows:

Patients were subjected to a standard 12-lead ECG and SPECT myocardial perfusion imaging was performed subsequently. Patients were made to exercise on a treadmill (Bruce protocol) for 5 - 10 minutes up to a workload of 10.2 Mets. A total dose of 296 MBq (MCi) 99m TC MIBI was injected IV at peak stress and cardiac SPECT images were acquired thereafter. Rest study was conducted 3 hrs after completion of the stress study.

The end point criterion was adequate level of exercise. Exercise tolerance was measured and ECG changes during the stress study were noted. Perfusion images were acquired in short axis, vertical and horizontal long axis for any defects and whether the defects reversed / persisted at rest suggestive of viable myocardial tissue / scar tissue. The images were analysed for presence or absence of perfusion defect and its extent. A nuclear medicine specialist reported the result.

Data was recorded on a pre-designed Performa and was managed on a Microsoft Excel sheet. Statistical Package for Social Sciences (IBM SPSS Statistics for Windows, Version 20.0. Armonk, NY: IBM Corp.) was used for Data analysis. The results of delayed hyper-enhancement on cardiac MRI were compared to the results of nuclear perfusion scan. Pearson Chi-Square test and Fisher’s Exact Test were used for statistical evaluation. In this study P value 0.0016 was considered statistically significant (Table 1 and 2). 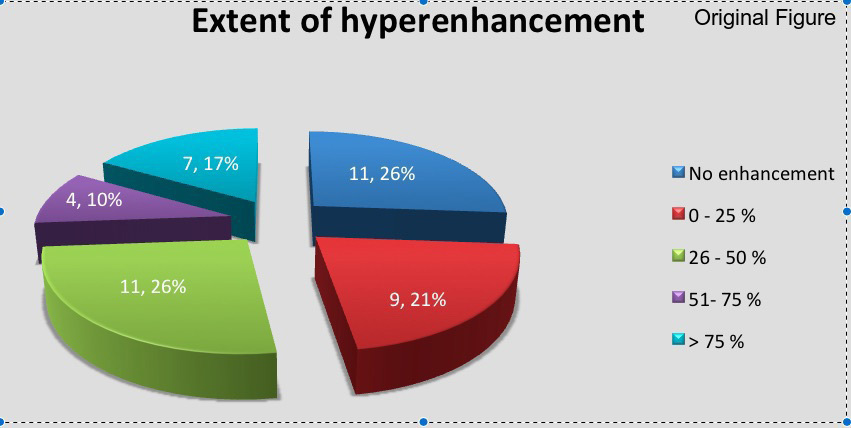 Distribution of viable vs non-viable myocardium on nuclear perfusion scan. 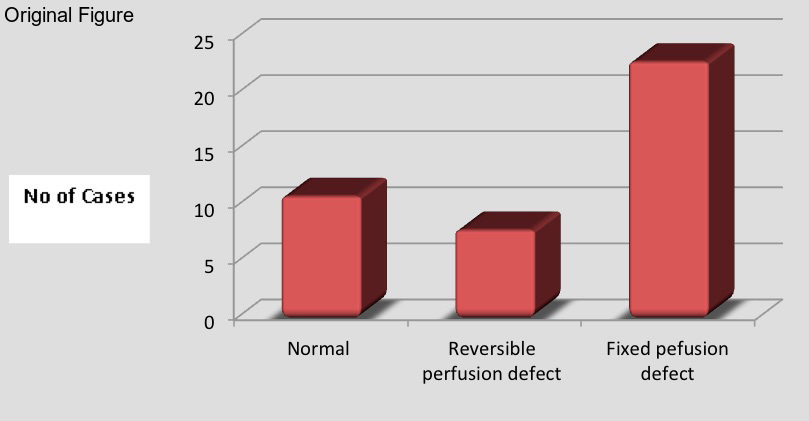 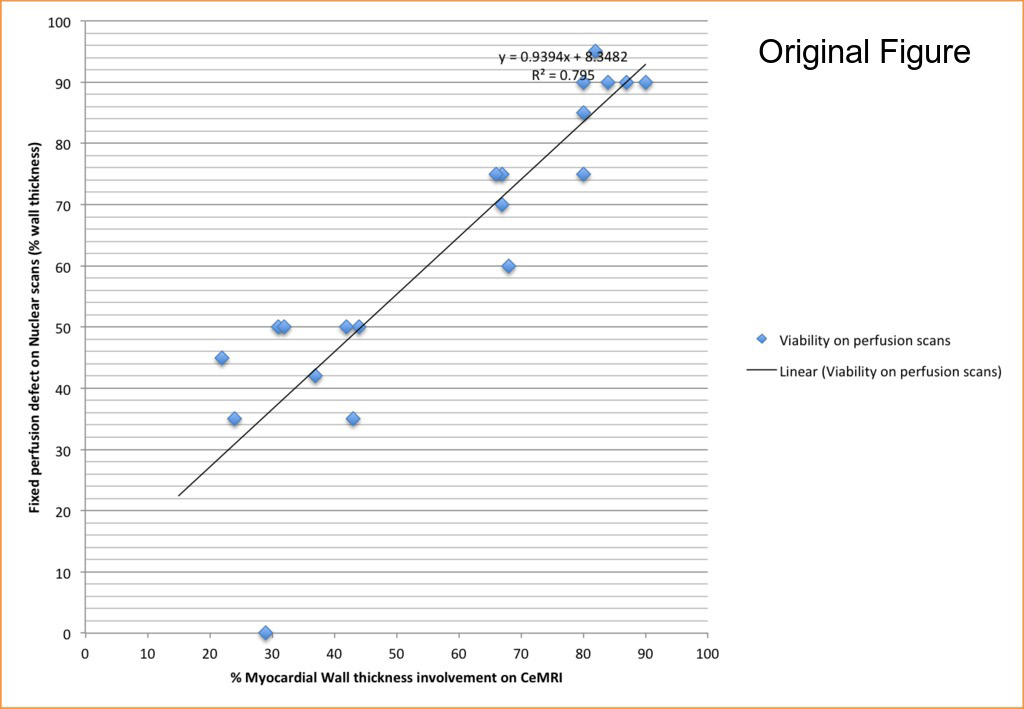 The sensitivity of delayed hyper enhancement MRI for detection of viable myocardium in the study group was 100 % and the specificity was 47.83 %. The positive predictive value of the modality in detecting viability was 61.29 % with a diagnostic accuracy of 71.43 %.

The most common implicating event in causation of myocardial infarction is coronary artery occlusion secondary to embolization by an unstable coronary plaque. Hypoxia caused by such an occlusion causes initial cellular changes in the myocardial tissues in the territory supplied by the occluded vessel, which causes a progressive decline in the ventricular function and sometimes heart failure, if a large area is involved. Without critical blood supply, the inflammatory mediators such as cytokines are activated in the infarcted region that leads to the initiation of cellular processes of necrosis, apoptosis and autophagy, which further leads to loss of functional cardiomyocytes.10,11 These processes occur simultaneously in the hypoxic tissue as the affected cells struggle to survive or die. These inflammatory pathways are critically involved both in repair as well as remodeling of the infarcted myocardium. β-adrenergic receptors (AR) serve as critical regulators of cardiac function at the level of the myocardium and in circulation.12 Post myocardial infarction, β1 adrenergic signaling in myocardial cells is seen to be associated with cardiac hypertrophy, ventricular remodeling and apoptosis. A study by Shashi Bhushan et. al. (2012)13 demonstrated that selective β2-adrenoreceptor stimulation attenuates myocardial cell death and preserves cardiac function after ischemia–reperfusion injury.13

Dysfunctional myocardium with focal areas of viable tissues has the potential for contractile recovery after reperfusion.15 This distinction between viable myocardial tissue and non viable necrotic tissue is a pre-operative predictor of the benefit of any revascularization procedure. Location of viable myocardium, especially in the sub-epicardial location, may have an important influence on long-term ventricular function.16 The principle of determination of myocardial viability on CeMRI is based on the observation that infarcted area (necrosed tissue), enhances avidly, 10-15 minutes after intravenous contrast administration.17 This delayed hyper enhancement has been shown to correlate precisely with the actual extent of infarct as observed in various animal and human studies.17,18 Viability imaging thus reliably helps to identify areas of hibernation and viable or non-viable myocardium.

The present study conducted at our hospital also showed that cardiac MRI using delayed hyper enhancement technique and nuclear perfusion studies detected trans-mural myocardial infarcts at similar rates. However, cardiac MRI was able to detect sub endocardial infarcts (< 50 % wall thickness) in some cases (33%), which were totally missed in nuclear perfusion imaging that had demonstrated a normal study. Thus MRI was found to be more sensitive than nuclear perfusion scans for detecting sub endocardial infarcts. It was also found that the sensitivity of delayed hyper enhancement on MRI for detection of viable myocardium was 100 % with a specificity of 47.83 %. The positive predictive value of the modality was 61.29 % with a diagnostic accuracy of 71.43 %.

The general idea that SPECT misses small infarcts has been previously reported by,22,21 which also demonstrated that SPECT was poor at picking up small sub endocardial infarcts as compared to the MR imaging.22,23

In a study by Anja et al. a comparing contrast enhanced cardiac MRI with SPECT also found that SPECT not only misses some infarcts, but also a large proportion of patients in whom infarct is missed, the SPECT scan is completely normal.24 In a large proportion of such patients, delayed-enhancement cardiac MRI was able to detect sub-endocardial infarcts in 92%, whereas SPECT detected only 28%. Due to low spatial resolution and degradation of image quality associated with SPECT, the study is limited, especially in the detection of small and sub endocardial infarcts.25,26

Thus to conclude, necrotic myocardium and scar resulting from myocardial infarction, may be distinguished from normal myocardium by magnetic resonance imaging (MRI), an operator independent technique, which is quite safe for patients.27,28 Contrast enhanced MRI (CeMRI) seems to be clinically useful and reproducible in scar detection.29 Though nuclear perfusion study is the gold standard for demonstrating myocardial viability, CeMRI is more sensitive in demonstrating sub-endocardial infarcts which is possibly because of higher contrast and spatial resolution of the MRI as compared to nuclear imaging. The excellent tissue characterization function enables MRI to detect viable myocardium accurately. Contrast enhanced MRI provides information on tissue perfusion, cellular integrity and membrane function and has the potential to replace or complement other commonly used techniques in the diagnosis of viable and irreversibly damaged myocardium.

The authors have none to declare.

Contrast enhanced MRI has high sensitivity in the detection of viable and irreversibly damaged myocardium and has the potential to replace or complement nuclear perfusion scans in detecting myocardial viability in patients of myocardial infarction.

We would like to acknowledge everybody who contributed in the completion of the study including the technical staff. We also hereby transfer, assign, or otherwise convey all copyright ownership, including any and all rights incidental thereto, exclusively to the journal, in the event that such work is published by the journal.

Journal:
Journal of Cardiovascular Disease Research
‹ Association between Myocardial Infarction and Dermatoglyphics: A Cross-Sectional Study up Is Cardiovascular Risk Associated with Subclinical Hypothyroidism: Role of C Reactive Protein and Interleukin-6 ›