Prevalence of Uropathogen and their Antimicrobial Resistance Pattern in a Tertiary Care Teaching Hospital in Port Blair, India

Urinary tract infection (UTI) is one of the most common infections seen in the community. Knowledge of common uropathogen and their antimicrobial susceptibility is necessary for initiation of empirical therapy. This study aimed to determine the spectrum of organisms responsible for UTI and their antimicrobial susceptibility pattern in a Medical College Hospital situated in an Island in the Bay of Bengal.

Urine samples received in Microbiology Laboratory between April 2015 to March 2016 were processed according to standard guidelines. The antimicrobial susceptibility testing was performed by the Kirby-Bauer's disc diffusion method and interpreted as per CLSI guidelines.

Total of 7850 urine samples were processed during the study period, 956 (12.18%) had significant bacterial growth, of which 65.27% belonged to women and 34.73% to men. Gram negative bacteria (GNB) were isolated in 74.79% followed by Gram Positive bacteria 20.40% and yeast 4.81% isolates. The commonest uropathogen was Escherichia coli (48.01%). The uropathogens were most resistant to Ampicillin (91.5%), while they were highly sensitive to Levofloxacin and Meropenem. The GPCs were most resistant to Penicillin (66.67%).

Uropathogens were most commonly isolated in 15-30 years age group and the most common isolated microorganism was Escherichia coli. Regular prevalence studies on uropathogens is warranted to assess the trends of the ever changing scenario.

UTI is most common in women in the age group of 15-30 years and the most common organism incriminated is Escherichia coli. In contrast, the most common age group affected in men is above 60 years of age. However,the prevalence in children showed progressive reversal in gender with increasing age.

Urinary tract infection (UTI) is one of the most common infections seen in the community.1 Uncomplicated cystitis in women is the single most common UTI and according to European Association of Urology, is defined as the growth of a single pathogen of >105 colony forming units from properly collected midstream urine sample.2 Acute UTI is one of the most important causes of morbidity and has considerable financial implications. It is estimated that 150 million people suffer with UTI every year world-wide, costing the global economy 6 billion dollars.1

The higher occurrence of UTI in women is well documented. This is due to the structural anatomy of the female genito-urinary tract, which is more conducive for infection. Further, pregnancy is a physiological state causing increased occurrence of UTI.3,4 Other predisposing factors noted are age, sexual activity, diabetes mellitus, immunocompromised states, neurological disorders and catheterisation. Asymptomatic bacteriuria are more prevalent in women with diabetes (26%) than in women without diabetes (6%).5

A wide spectrum of organisms are known to cause UTI, commonly encountered being Escherichia coli, Proteus species, Klebsiella species, Enterococcus species and yeasts.7 A knowledge of the common uropathogens and their antimicrobial susceptibility is necessary for the initiation of the empirical therapy.8

The antimicrobial pattern is diverse and varies with geographical location, influenced by the presence of multi drug resistance (MDR). Multi drug resistance which was limited to hospital setting has been increasingly spreading at the community setting. The factors like overuse and misuse of antimicrobials in allopathic medicine, veterinary and agriculture practise is responsible for the selection of resistant strains and spread of the resistant clones of the organisms.9

This study was undertaken to determine the spectrum of organism responsible for UTI and their antimicrobial susceptibility pattern in a medical college hospital located in an Island in the Bay of Bengal.

The study was conducted in the Department of Clinical Microbiology of a Medical College Hospital in Port Blair. As per our study design, all urine specimens that were submitted to the laboratory and which were acceptable as per SOP (a clean-catch Mid-stream urine sample)10 of our laboratory, were included for the study. Any other sample other than voided urine was excluded from study (e.g. catheter urine sample). The specimens were screened for uropathogens as per standard guidelines.10 In brief, each sample was plated on a Cystine Lactose Electrolyte deficient (CLED) medium using a calibrated standard loop and observed for growth after overnight incubation. A single type of colony with a count of >105 CFU/ml was considered significant. Specimen with bacterial count less than 105 CFU/ml but associated with evidence of inflammation or antibiotic therapy, were further processed as uropathogens. Significant cultures were identified by morphologyon Gram's smear, colony characteristics and biochemical reactions as per standard guidelines10 and further confirmed byautomated identification system (BD Phoenix system, BD, USA). 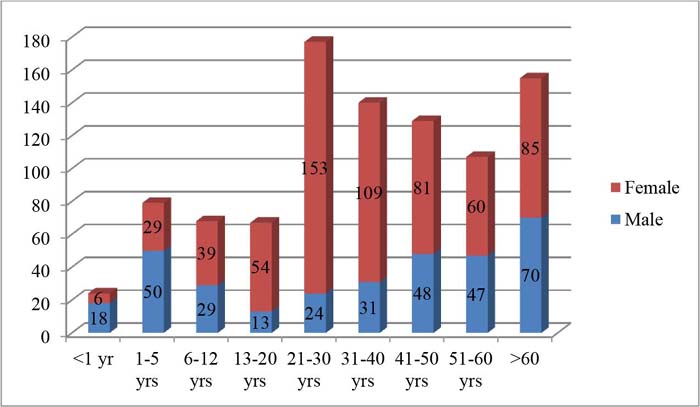 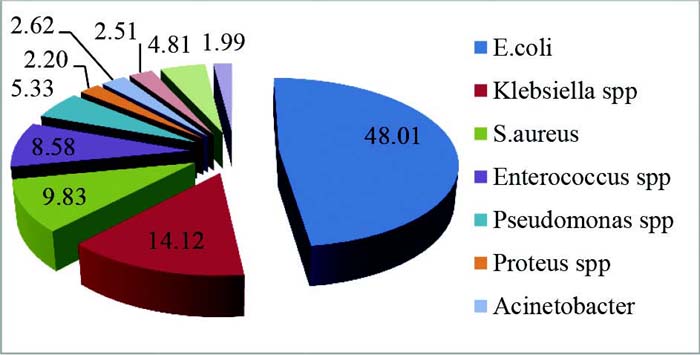 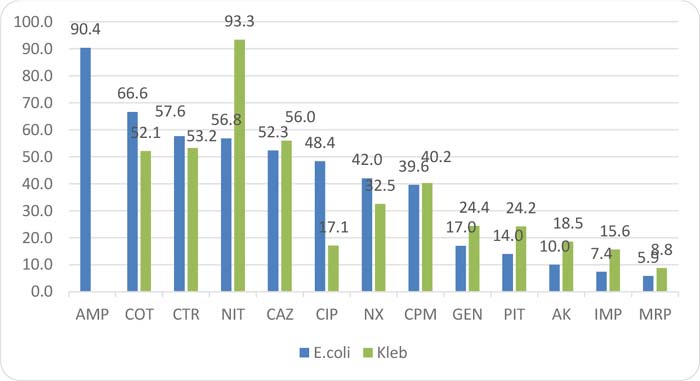 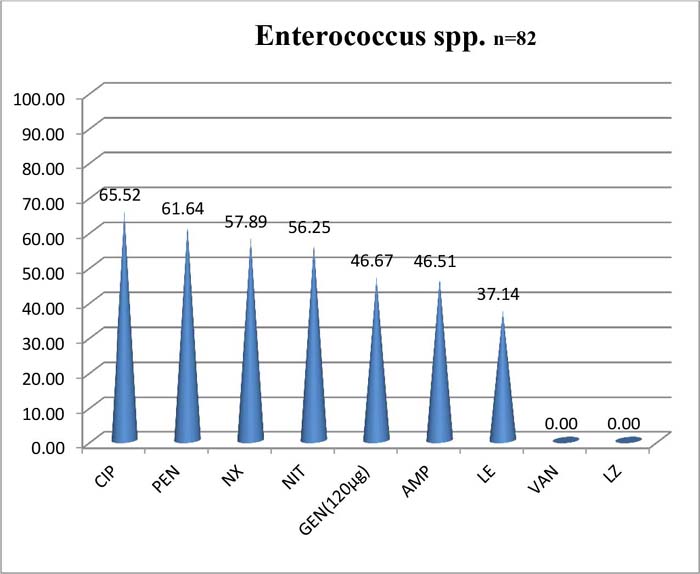 Urinary Tract Infection is one of the commonest cause of hospital visit, especially in women of reproductive age group. With emerging MDR in microbes the pathophysiology is often confusing.

The present study evaluated 7850 urine specimen submitted to the Clinical Laboratory over a 12 month period across all age groups (0-76 years). The prevalence of UTI, as determined by a significant positive culture was 12.18 % (956/7850). The prevalence rates documented across the globe ranged from 4.2% to 97.3%. Such high variations can be attributed to geographical location, climate and local environment, socio-economic status, literacy rates, etc. In a developing nation, such as India, prevalence rate ranges from 9.17% to 36.68%.3,12,13,14,15 The low prevalence in the present study can be explained by a) awareness in the population of the island creating greater emphasis on personal hygiene b) non-specific symptoms being suspected as UTI and submission of urine specimen.

The prevalence rates were higher in women (65.27%) as compared to men (34.73%) across all age groups. In women, the age group most commonly affected was 21-30 years (16.17%) followed by 31-40 years (11.52%). Approximately one half of all UTIs occurred in the reproductive age group (15-45 years). These are well documented findings and attribute the higher occurrence to the anatomical- physiological changes in women during this period.3,16

In contrast, the most common age group affected in men was above 60 years or elderly males (7.4%). This can be explained as with increasing age men undergo physiological changes such as prostatic enlargement, neurogenic bladder and appearance of co-morbidities such as Type 2 Diabetes mellitus. The above findings of gender prevalence and distribution are in consonance with documented research. Studies have also documented a higher prevalence of UTI in elderly men than in elderly women5,14,16,17

Among all urine specimens tested, 171 of them from children had a significant growth on culture. The prevalence between boys to girls was 1.3:1(97:74) across all age group in paediatric population. However, it is interesting to note that the prevalence in children showed progressive reversal in gender with increasing age. The boys to girls proportion rate for UTI were 3:1 in under 1 year age group followed by 1.7:1 in 1-5 year age and 0.7:1 in the 6-12 year age group. Similar findings were reported in other studies which also suggested extensive evaluation of boys as UTI was commonly associated with vesico-ureteric reflux and renal scarring.3,6

Gram negative bacilli (74.79%) were the commonest cause of UTI followed by gram positive cocci (20.40%) and yeasts (4.81%). Escherichia coli (48.01%) was the most common organism associated with UTI in all age groups and gender, followed by Klebsiella spp . The other gram negative bacteria associated with UTI were Pseudomonas spp (5.33%), Acinetobacter spp (2.62%), and Proteus spp. (2.2%). Gram positive cocci commonly incriminated in UTI were Staphylococcus spp. (11.82%),followed by Enterococcus spp. (8.58%).

Though a thorough research was made in elucidating the aetiology and antimicrobial susceptibility of uropathogens, confirmation of the mechanism of their antimicrobial resistance could not be performed due to operational reasons and the same is being conducted as an extension of the current study. Another area of limitation of the current study is the deficient clinical data that was available to us for making clinical correlation.

From the above study it has been observed that there is an increase in emergence of multidrug resistant organisms in the community. Therapy of such UTI with MDR organism often becomes difficult due to limited availability of appropriate antibiotics. Such a situation has arisen due to inappropriate use or abuse of antibiotics. Hence, it is necessary that there should be prudent use of available antibiotics.

As evident from the limitation of the present study, we propose that a prospective study on uropathogens with all clinical correlation and study of mechanisms of resistance is very much warranted to understand this problem on a larger perspective.

[1] Conflicts of interest CONFLICT OF INTEREST The authors declare that there is tno conflict of interest.

Journal:
International Journal of Medicine and Public Health
‹ Usefulness of Mid-Upper Arm Circumference in Assessment of Nutritional Status of Elderly Persons in Urban India up Socio-Demographic, Somatic and Disease Profile of Cancer Patients in Tertiary Care Centres of a City in Karnataka, India ›