The study was done to find out the association between mid-upper arm circumference (MUAC) and body mass index (BMI) and to estimate the cut-off values of MUAC in elderly.

A community-based cross-sectional study was done in a resettlement colony in Delhi. Persons aged 60 years and above were selected by cluster random sampling. House-to-house visits were made, and weight, arm span, mid-upper-arm circumference were measured. Mid-upper arm circumference and body mass index of participants are expressed as mean ± standard deviation (SD). Scatter diagrams and regression lines were plotted to study the relationships. Receiver operating characteristics (ROC) analysis was done and area under ROC curve was assessed. The sensitivity and specificity for different values of mid-upper arm circumference was calculated.

The study was done to find out the association between mid-upper arm circumference (MUAC) and body mass index (BMI) and to estimate the cut-off values of MUAC in elderly. . Positive correlation was seen between BMI and MUAC in men and women. The study authenticates that MUAC correlates positively and significantly with BMI. MUAC values of 25.7 cm in men and 24.3 cm in women are useful cut-off points for undernutrition, while 28.5 cm in men and 27.5 cm in women could be useful for overweight/obesity.

Nutrition plays an essential role in health outcomes of older persons. Anthropometric appraisal has always been the preferred method of nutritional evaluation for determining malnutrition, overweight and obesity. It has the advantages of being portable, non-invasive, inexpensive, and simple to use.1 The World Health Organization Expert Committee had also recommended anthropometric data collection of adults aged 60 years and above.2 Most studies use body mass index as the indicator for assessing nutritional status in all age groups. However, in elderly persons, the process of measuring weight and height may not always be possible. In clinical settings, when a patient is bed-ridden or incapacitated, measurement of weight may be a challenge. Similarly, due to ageing process which results in change of body composition, such as loss of height and weight, muscular and fat mass, body mass index may not be a true indicator of nutritional status in elderly persons.3 Studies from Indonesia, Canada and Mexico suggest that mid-upper arm circumference could be a proxy indicator for nutritional status in elderly persons.1,3,4,5 In India, there is limited published data on its usefulness among elderly persons. Hence, there is a need to carry out similar research in urban elderly population in India. This study was conducted with the objective of studying the association between mid-upper arm circumference and body mass index among elderly persons of Delhi, and to estimate the cut-off values of mid-upper arm circumference in detecting undernutrition and overweight/obesity.

A community-based cross-sectional study was done in 2015 in Dakshinpuri Extension, Dr. Ambedkar Nagar, Delhi, a resettlement colony. Ambulatory persons aged 60 years and above, who were residents of the study area for at least the past six months were included in the study. Those who were too ill to participate were excluded. Sample size calculation was done for a population correlation coefficient of 0.5, sample correlation coefficient of 0.4, power of 90%, and alpha of 5%. As there is no study in Indian context reporting the correlation between BMI and MUAC in elderly population, we assumed a correlation coefficient of 0.50 in the population which gives highest sample size. Anticipating a correlation coefficient 0.4 in the sample with 90% power and 5% level of significance, the estimated sample size was 669 elderly persons. The formula used to estimate the sample size6 is n=(z1-α/2+z1-β)2/(F(r1)-F(r0))2, where F(r1)=1/2*ln((1+r1)/1-r1)) and F(r0)=1/2*ln((1+r0)/1-r0)), z1-α/2=1.96 and z1-β=1.28. Cluster random sampling was done where each block was one cluster. All elderly persons in the randomly selected three blocks were recruited to the study. House-to-house visits were made, and measurement of weight, arm span, mid-upper-arm circumference were done using standard procedures as per the World Health Organisation (1995) guidelines.2 Body Mass Index (BMI) was derived from weight and arm span; BMI = weight (kg)/arm span (m2). In elderly persons, arm span is a better proxy measure for height, because as a result of increased spinal curvature and postural problems, accurate measurement of height is difficult. Studies have shown that arm span correlates highly with height, and can be used as its substitute in elderly persons.7,8,9,10,11,12 As per guidelines of the World Health Organization, under-nutrition was defined as a body mass index (BMI) of less than 18.5 kg/m2; overweight was defined as BMI 25.0-29.9 kg/m2 , and obesity as BMI ≥30.0 kg/m2. Measurement of arm span was done using a flexible steel tape. Each measurement was taken twice, and the average was calculated. Arm span was taken with the participant standing against a wall, looking straight at eye level, with arms extended laterally at shoulder level. Then the steel tape was extended from the tip of the middle finger of one hand straight across the chest, to the tip of the middle finger of the other hand, and recorded to the nearest 0.1 cm. The weight was measured to the nearest 100 grams on a digital weighing scale (Dr.Morepen Home health, Model MS-8604) with participants wearing light clothing.

Ethical clearance was obtained from the Ethics Committee of the All India Institute of Medical Sciences, New Delhi. Informed written consent was obtained from all participants. Any medical condition which needed management or referral was appropriately attended to.

Statistical analysis: Data was entered in MS Excel 2007, and analysis was carried out using Stata 11.0 (College Station, Texas, USA). Mid-upper arm circumference and body mass index of participants are expressed as mean ± standard deviation (SD). Scatter diagrams and regression lines were plotted to study the relationships. Receiver operating characteristics (ROC) analysis was done and area under ROC curve was assessed. The sensitivity and specificity for different values of mid-upper arm circumference was calculated. ROC curves were made to show the ability of mid-upperarm circumference in detecting undernutrition and overweight/ obesity.

Correlation between BMI (kg/m2) and mid-upper arm circumference(cm) in men and women. 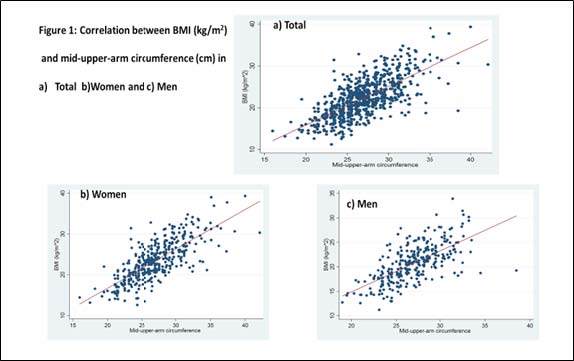 The correlations coefficients are reported Table 2. As is evident, there is a strong correlation between mid-upper arm circumference and body mass index in both genders, across all age-groups.

[i] Data is presented as correlation coefficient (p-value)

Since no cut-off values have been recommended for mid-upper arm circumference (MUAC) in elderly persons, cut-off values for detecting undernutrition were explored by Receiver Operating Characteristics (ROC) curve analysis. The sensitivity and specificity for different values of MUAC was calculated using body mass index < 18.5 kg/m2 as the gold standard for detecting undernutrition, and 25 kg/m2 for overweight/obesity. The cut-off levels were chosen at the value where sensitivity and specificity were maximum and closest to each other. These are shown in Table 3.

[i] * The 185 persons who were overweight\obese were excluded from this analysis;

[ii] ** The 148 persons who were undernourished were excluded from this analysis.

ROC curves were made to show the ability of mid-upper arm circumference in detecting undernutrition and overweight/ obesity. The ROC curves for men and women separately are shown in Figure 2 and Figure 3 respectively. When the cut-off was 25.2 cm, the area under ROC curve (AUC) was 0.83 (95%CI 0.79, 0.87) for detecting undernutrition in both men and women.Whereas for overweight and obesity, with 28.2 cm cut-off, area under ROC curve was 0.80 (95% CI 0.76, 0.83).

ROC curves showing the ability of mid-upper arm circumference in detecting undernutrition in men and women. 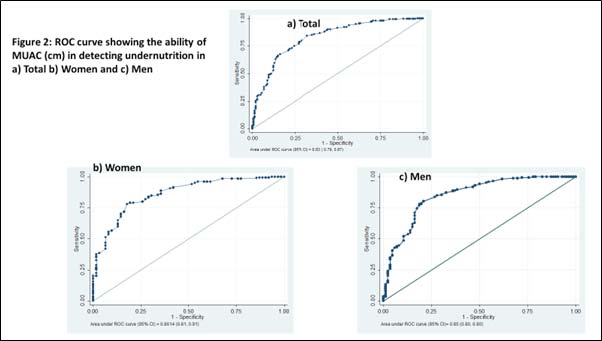 ROC curves showing the ability of mid-upper arm circumference in detecting overweight and obesity in men and women. 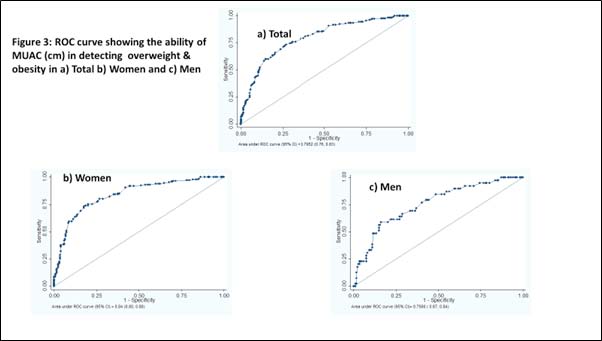 This study also tried to establish a reasonable cut-off point for mid-upper arm circumference for undernutrition, equivalent to body mass index ≤ 18.5 25 kg/m2, and body mass index ≥25 kg/m2 for overweight/obesity. In this study, it was seen that cut-off of 25.2 cms was shown to be the optimum level for both men and women, which yielded a sensitivity and specificity of 75.7% and 75.1%, for undernutrition Whereas a study from rural Haryana recommended a cut-off value 26.1 cm for mid-upper arm circumference for detecting undernutrition.4 A study from Mumbai reported similar cut-off 25.0 cm for men and 24.3 cm for women.18 Higher cut-off values were obtained in a multi-centric study in Indonesia where the cut off value of upper arm circumference for elderly men and women is > 27 cm.15 A study from Spain showed that the mid-upper arm circumference value 22.5 cm presented a sensitivity of 67.7%, specificity of 94.5%, and a correct classification of 90%.19 Using the cut-offs 28.2 cm for both men and women combined, the sensitivity and specificity were 73.5 % and 73.0 %, respectively for overweight\obesity.

Limitations: This study was carried out in a small population which may not be representative for different populations in India. There is need to create regional specific geriatric reference values or standards of anthropometry across ethnicities and regions for nutritional assessment methods of older persons.

[4] Conflicts of interest CONFLICT OF INTERESTThe authors declare no conflict of interest.

Journal:
International Journal of Medicine and Public Health
‹ Exploring the Bottlenecks: An Assessment of the Implementation Process of Janani Suraksha Yojana in the State of West Bengal, India up Prevalence of Uropathogen and their Antimicrobial Resistance Pattern in a Tertiary Care Teaching Hospital in Port Blair, India ›