Skip to main content
Home IJMEDPH, Vol 8, Issue 1, Jan-Mar, 2018 The Effect of Thyroid Hormone Replacement on the Level of Blood Pressure in the Cases of Subclinical Hypothyroidism

Sukriti, Sumit, Manish, Annesh, Syed, and Agarwal: The Effect of Thyroid Hormone Replacement on the Level of Blood Pressure in the Cases of Subclinical Hypothyroidism

Hypothyroidism (both subclinical and overt) is associated with increased cardiovascular morbidity. About 3% hypertensive patients found to have hypothyroidism during the routine investigations.

To assess the effect of thyroid hormone replacement on the level of blood pressure in the cases of newly diagnosed subclinical hypothyroidism.

The effect of thyroxine replacement therapy in cases of hypertension with subclinical hypothyroidism on blood pressure was significant reduction in blood pressure after achieving normal thyroid function.

Hypothyroidism is a condition resulting from a lack of the effects of thyroid hormone on body tissues. Because thyroid hormone affects growth and development and regulates many cellular processes, the absence or deficiency hormone has many detrimental consequences. Iodine deficiency remains the most common cause of hypothyroidism worldwide. In areas of iodine sufficiency, autoimmune disease (Hashimoto’s thyroiditis) and iatrogenic causes (treatment of hyperthyroidism) are most common.1,2

Subclinical hypothyroidism (SCH) is a common condition affecting 4%-20% of the general population. SCH is defined as increased serum thyrotropin (TSH) concentrations and normal serum free thyroxine levels (fT4).3 Patients with primary hypothyroidism are at a three times greater risk for early atherosclerosis, as shown independently for other risk factors, such as atherogenic lipid profile, hypertension and impaired endothelial function. Whether SCH has influence on the same risk factors and is associated with atherosclerosis is still under debate. Some studies showed that there is an association,4,5 but others did not.6

Several studies have shown an association between SCH and hypercholesterolemia,13,14 but other studies have not.15-18 Monzani and cols.19 and Nagasaki and cols.20 showed increased Carotsid Intima-Media Thickness (CIMT) in patients with SCH. Kim and cols.21 showed a difference in total cholesterol, LDL-C, and mean CIMT (0.66 ± 0.1 mm, vs. 0.57 ± 0.08 mm) in SCH, compared with healthy control groups. The difference of CIMT in the study of Kim and cols.21 is perhaps due to differences in mean cholesterol between the groups.

Because of these controversies, the benefit from thyroid replacement therapy in SCH is unclear. There are very few studies which show the effect of thyroid hormone replacement on the level of blood pressure in the cases of subclinical hypothyroidism. There is very limited data from the Indian subcontinent.

METHOD: Measurement of blood pressure was done by mercury sphygmomanometer in right arm in sitting and supine position, the care taken during measurement that the patient to sit quietly for 5 min before measuring blood pressure, the patient should be seated comfortably with the back supported and the upper arm bared without constrictive clothing, the legs should not be crossed, the arm should be supported at heart level, and the bladder of the cuff should encircle at least 80% of the arm circumference, larger or smaller cuffs were used as needed. The mercury column would be deflated at 2 to 3 mm/sec, and the first and last audible sounds would be taken as systolic and diastolic pressure. Thyroid peroxidase antibody (TPOAb): Less than 35 IU/mL.

STUDY PROTOCOL: The cases of subclinical hypothyroidism were divided into two groups, normotensive and the hypertensive. Cases after thorough evaluation were prescribed thyroxine replacement therapy to achieve euthyroid function. Each group followed periodically at 1 ½12;, 03 and 06 month with measurement of blood pressure and serum TSH level and studied for effect of thyroxine replacement on BP level.

The study evaluated the effect of thyroid hormone replacement on the level of blood pressure in the cases of subclinical hypothyroidism at a tertiary care centre. A total of 280 patients were recruited and evaluated after inclusion and exclusion criteria. Figure 1 shows the study protocol. 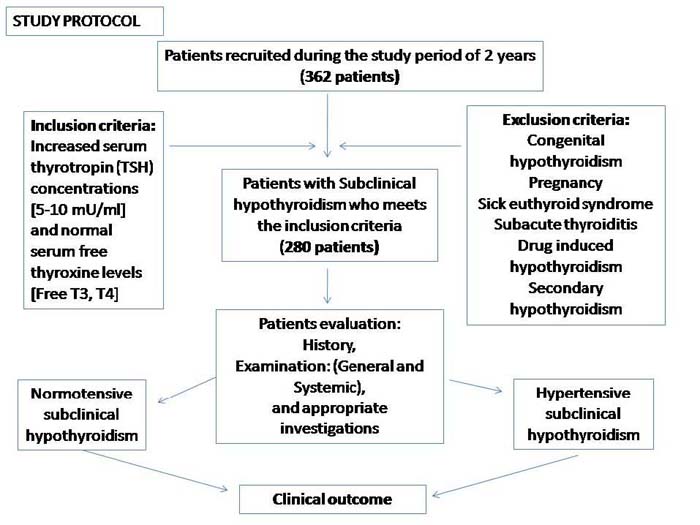 2. PREVALENCE OF HYPERTENSION: The prevalence of hypertension in cases of subclinical hypothyroidism in this study was 33.9 per 100 populations and its increases with increasing age. In age group < 20 years prevalence is 0%, in age group 20-40 years it was 16.7% and in age group > 40 years prevalence was 50% which is statistically significant p=0.02. The male to female ratio was found to be 35(36.8%):60(63.2%) or 1:1.71 (Table 1). There is positive linear correlation between serum TSH and blood pressure level and which was statistically insignificant (p=0. 236) (Table 2).

Distribution of TSH Levels with Grade of Hypertension

Difference Between Hypertensive and Normotensive Groups

III. Effect of thyroxine replacement on systolic, diastolic, mean and on weight reduction:

Effect of Thyroxine Replacement on Systolic, Diastolic and Mean BP In Cases of Normotension Patients With Subclinical Hypothyroidism 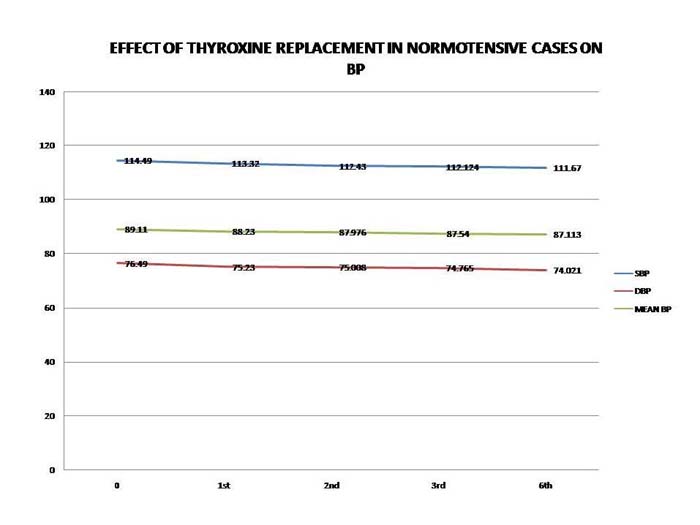 Effect of Thyroxine Replacement on Systolic, Diastolic And Mean BP In Cases of Hypertension Patients With Subclinical Hypothyroidism 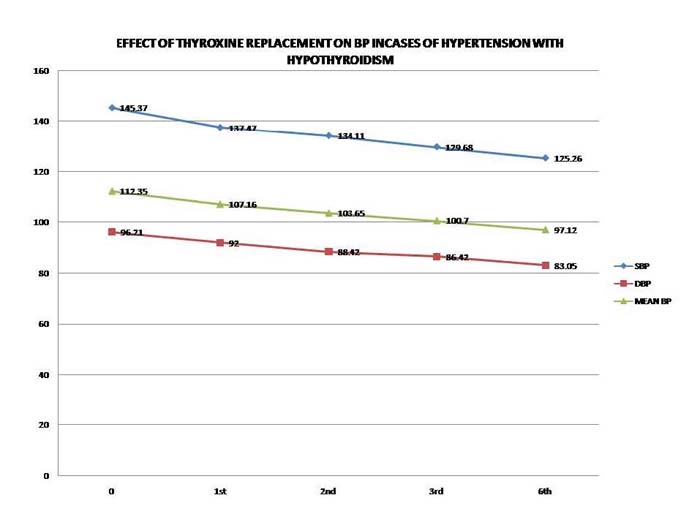 These are two main factors contribute to systemic hypertension in subclinical hypothyroidism. The first and certainly the most widely recognized, is the remarkable increase in peripheral vascular resistance. The second and more recently documented is the increase in arterial stiffness, which likely results from myxedema of arterial wall. In general systemic hypertension associated with subclinical hypothyroidism is poorly controlled by conventional treatment, whereas it promptly improves with achievement of euthyroidism. So it is important to encourage the routine assessment of thyroid function in all patients with pre-existing systemic hypertension that became resistant to pharmacological treatment.10

On behalf of all the contributors I will act and guarantor and will correspond with the journal from this point onward.

[2] Conflicts of interest CONFLICT OF INTEREST No potential conflict of interest relevant to this article was reported.

Journal:
International Journal of Medicine and Public Health
‹ Prospective Evaluation of Patients Leaving against Medical Advice of a Tertiary Care Hospital: Comparison of Emergency and Intensive Care Units up Exploring the Bottlenecks: An Assessment of the Implementation Process of Janani Suraksha Yojana in the State of West Bengal, India ›