Nitika, Neelam, Srishti, and Anuj: Review of Under-Five Deaths through Verbal Autopsy in a Rural Block of Haryana

Under-five mortality rate (U5MR) serves as an indicator for the health and socio-economic status of a given population. Earlier MDGs and now SDGs pledge to bring down the U5MR. Verbal autopsy enables to make a retrospective enquiry into events leading to death, identify delays contributing to death and establish probable cause of death. This study aimed to compare the determinants and delays leading to infant and child deaths.

A cross sectional study was carried out in a rural block of district Rohtak from July 2015 to June 2016. All the under-five deaths that took place during study period were reviewed through verbal autopsy using NRHM death review formats. The data collection was done through house-to-house visits.Data was analysed using SPSS.

Factors contributing to the mortality among the under-five children were the lower educational status of parents especially mothers, not practising EBF, inadequate knowledge regarding danger signs among parents, socio- economic barriers to care seeking and cultural beliefs.

The MDG 4 sole target was specifically aimed to bring down the under-five mortality by two thirds between 1990 and 2015. The proposed SDG target 3.2 aims to end preventable deaths of children under five years of age by 2030 to 25 per 1,000 live births.6

Most child deaths are caused by diseases that are readily preventable or treatable with proven, cost-effective and quality-delivered interventions. Infectious diseases and neonatal complications are responsible for the vast majority of U5 deaths globally.7

Verbal autopsy, a method of obtaining information about a deceased person by asking questions from family and others who can describe the mode of death and circumstances preceding death9 can be used as an alternative method for collecting mortality data and establish the cause of death retrospectively.The verbal autopsy, in simpler words, is a tool to identify delay in seeking care, delay in transport or the delay in providing appropriate care at facility and community levels that contributed to childhood illnesses and mortality. Knowledge about causes of death and any vital event is important for public health planning and resource allocation.

Knowledge about causes of death and any vital event is important for public health planning and resource allocation. There is considerable lacuna in vital registration as well as in reporting of the cause of death.10 This studywas conducted with the objective to compare the various socio-demographic determinants and socio-cultural factors causing delay and contributing to deaths of infants and children under five years of age.

A cross sectional study was carried out in a rural block of district Rohtak to review all the under-five child deaths from the period of July 2015 to June 2016. The population of block was 106935 (as enumerated in the annual survey by multipurpose health workers) and it has 3 PHCs and 20 SCs. The estimated number of deaths using the birth rate (22.6 per 1000 population)11 and U5MR (44 per 1000 live births)11 for the rural Haryana came out to be 106. Universal sampling was applied to include all the deaths that took place in the study area during the study duration. Prior ethical approval was obtained from the institutional ethical committee.

All the respondents of the deceased children willing to participate in study were included. Parents, next-of-kin or caregiver who could not be contacted after three visits, not willing for the interview and had moved out of the area were excluded from the study.

A predesigned pretested semi structured schedule used by National Health Mission was used to collect data. A pilot study was carried out to check for the feasibility of the tool. The data was entered in the Microsoft Excel spreadsheet and analysed using SPSS (Statistical Package for Social Studies) version 20.0.

The NHM schedule employs the use of ‘verbal autopsy’ to identify the probable cause(s), various determinants and delays contributing to death.

The list of children who died during July 2015 to June 2016 was obtained from each sub-centre. The respondents were personally contacted and interviewed by the investigator who was accompanied by the MPHW (F)/ ASHA worker of the respective area.

Table 1 shows that among the deceased infants, in majority, the age of mothers (62.1%) and fathers (63.6%) was between 23-27 years and 25-30 years respectively. Among the deceased infants, the mothers (37.9%) and fathers (25.8%) in majority were illiterate and among child deaths, majority mothers were secondary (37.5%) and higher secondary level educated (37.5%) educated and fathers were graduate and above (50%). 48.5% infant and 62.5% child deaths occurred among families lying in the lower middle socio-economic status.

Distribution of the type of death of deceased according to the various socio-demographic characteristics.

[i] *Figures in parenthesis represent percentage.

[ii] **Dominant caste includes the caste to which majority population belongs and prestige caste are other in general category.

Table 2 shows that among the deceased infant and children, majority (43.9% and 75% respectively) had third or higher birth order. Among the infants, majority deaths took place in hospital. 75.8% of infants and 75% of children who died were delivered by doctors and the association between type of death and the personnel assisting delivery was statistically significant (p=0.045). The findings for infant mortality could be attributed to the fact that sometimes females in labor get delayed in seeking care and report late to the institutions leading to complications and such deaths when registered in institutions give a spurious information on higher number of deaths in hospitals and among those delivered by health professionals. Majority of the deceased infants (72.7%) and children (75%) were born at term.

Characteristics of the deceased children.

[i] *Figures in parenthesis represent percentage.

Birth asphyxia (19.7%) accounted for majority of infant deaths followed by pneumonia (15.1%) and complications of preterm delivery (15.1%) including prematurity and LBW, then congenital diseases (13.6%), aspiration pneumonia (10.6%), diarrhoea and infection 9% each and accident /injury (4.5%).

It was observed that the major causes of child death were accident/injury and diarrhoea (Figure 1). 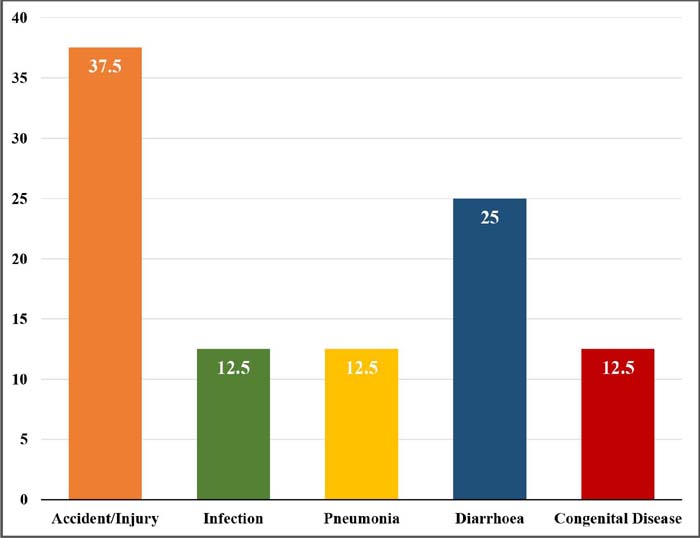 In the study, delay in seeking care and delay in transport were assessed and found to be contributing in 79.7% and 37.8% cases of deaths. However,the delay at health facility could not be properly assessed as only the view of the caregivers was available, no records of the treatment taken or of the health facility where treatment was taken were available in most of the cases (Table 3 and 4).

Independent association of risk factors for delay in transport.

Independent association of risk factors for delay in seeking care.

On applying the binomial logistic regression on the factors influencing the delay in seeking care, higher odds were observed for prestige and scheduled castes and among those having less than five members in the family.

Sample Registration System (SRS) 2014 5 reported the infant mortality rate in India as 39 per 1000 live births. Our study findings indicate lower mortality rates than national Figures and it may be difference in the sample size.13 In rural area of Aligarh reported infant and under-five mortality rates to be 82.96 and 125.6 per 1000 live births respectively which were higher than our study. It may be due to inaccessible health services and different health seeking behaviour of population in the area of Shah et al.

In our study, the association between mother’s age and type of death was statistically significant (p=0.005).14,15 Reported lower odds of infant and child mortality with increase in the age. This may be due to better utilization of Maternal and Child Health services by the older mothers. The parents in majority of infant deaths were illiterate and among child deaths, majority mothers were secondary (37.5%) level educated and fathers were graduate and above (50%). The association between parents’ education and type of death was statistically significant.16 Reported that mother’s schooling for more than 8 years lowered the odds of infant mortality by 34%. Higher level of education improves the knowledge of parents regarding early care seeking and utilization of health services.

The higher number of infant deaths was seen among the SC (27.3%) and OBC (28.7%) and child deaths were more among the prestige caste (37.5%) in our study.17 Reported that the odds of under-five mortality decreased among OBC caste (p <0.05). The disagreement in the findings can be due to difference in the sample size of the studies and cultural practices of the study populations. In our study, the association between type of death and socio-economic status was statistically significant (p =0.021).17 Reported lower odds of under-five mortality with higher standard of living (p <0.01). Lower number of deaths with increase in socio-economic status may be because of better affordability, access to health facility and improved literacy status.

In our study, among the deceased infant and children, 43.9% and 75% respectively had third or higher birth order. In the study by17 it was found that the odds of under-five death were lowered with third or higher (p <0.001) order of birth. The association of mortality with birth order may be due to socio-cultural variability. Also with the higher birth order, the fertility choices are influenced more by the family choices rather than age and educational status of the parents. Out of the deceased infants, 34.8% had low birth weight.18,9 the percentage of LBW in rural areas was 13.6 and 15.8 respectively which was lower than our study. In the study by,20 69.4% were born LBW. The difference in the compliance to the advice by healthcare providers, poor nutritional status and dietary habits of expectant mothers may be the possible reasons.

The educational status of parents, socio-economic status of the family and the personnel attending delivery were the key determinants of the under-five deaths in the study area. Birth asphyxia, pneumonia and complications of preterm delivery were the major causes of infant death and accident/injury, infection, pneumonia and diarrhoea contributed mostly to the child deaths. Various socio-cultural delays contributing to the deaths. Most of the under five children deaths can be prevented by regular and effective training programmes for health care providers and pregnant females whereas early recognition of danger signs and early referral system can save many precious lives.

The authors acknowledge the co-operation of relatives of the deceased on the sensitive issue studied.

[6] Conflicts of interest CONFLICT OF INTEREST The authors declare that there is no conflict of interest.