Cognition impairment is the most recurrent form of dementia in aged people indicated by permanent neuronal loss and atypical behaviour. Disparities in cholinergic pathway have been reported as major cause of cognition impairment, where deficiency of acetylcholine occurs due to hydrolysis of acetylcholine by cholinesterases. Bombax ceiba (Bombacaceae) commonly known as silk cotton tree is an imperative plant of tropical and subtropical region which have been mentioned in the traditional systems of medicine.

We have investigated the cholinesterase and antioxidant activity of B. ceiba extracts. Besides these activity evaluations, preliminary phytochemical testing and quantification of total phenolic and flavonoids have also been performed.

Extracts from B. ceiba flowers in hexane and ethanol were prepared by cold maceration method. In vitro cholinesterase activity was estimated with the help of Ellman’s reagent, antioxidant potential of extracts was determined by well known method such as DPPH, FRAP, reducing power and total antioxidant power assay. Total phenolics and flavonoids were quantified by colorimetric method.

Finding of present study indicated that B. ceiba extracts are rich in polyphenolic contents (19.10 ± 0.74 QcE and 28.01 ± 1.28 GaE). Results of antioxidative potential evaluation suggested that these extracts have high free radical scavenging potential (65.49 ± 2.49%) and are also able to reduce iron like radicals (93.78 FSE). Beside antioxidant potential B. ceiba extracts also inhibited the cholinesterase effectively (IC50 31.22 ± 1.42 µg/ml).

Current investigation on B. ceiba flowers indicated that phenolic rich extracts could be used in development of effective plant-based cholinesterase inhibitors.

Bombax ceiba L. (Bombacaceae), usually known as semal or silk cotton tree. Synonymously it is known as red cotton tree or Indian kapok tree (English), shimul (Bengali), mullilavu (Malayalam), shalmali (Sanskrit), and kondabruga (Telugu). It has been mentioned in Ayurveda, Siddha and Unani due to its applications in diuretic, diarrhoeal, Wounds, emetic and Acne.1,2 The Garo ethnic community of Bangladesh worship it, and also apply the paste prepared from bark to cure wounds.3 In recent years Bombax ceiba has been reported for it various pharmacological activities like hypotensive, anti-inflammatory, anti-diabetic, anti-obesity, anti-oxidant, anti-angiogenic, anti-microbial, and anti-cancer.3 B. ceiba is a tall deciduous tree with characteristic woody thorns on the trunk and branches,4 majorly found in India, China, Australia, Indonesia and South-east Asia.5 The flowers of B. ceiba have distinctive crimson colour which are ornithophilous, perianth is hard with stiff filaments and a well shielded ovary.6 The large, showy flowers usually appear when the trees are leafless.3 In many parts of India, different parts of this tree (leaves, flowers, calyx, and roots) are being used. The “Semargulla”(juvenile calyx) is consumed as a vegetable in many parts Uttar Pradesh.1 The paste made of flowers petals with breast milk was found useful to cure “red eyes”.7 Different polar and non-polar flowers extract of B. ceiba exhibited the presence of alkaloids, flavonoids, glycosides, coumarins, proteins and amino acids. Bombax ceiba flowers have been shown to contain the β-D-glucoside of β-sitosterol, free β-sitosterol, hentriacontane, hentriacontanol, traces of an essential oil, kaempferol, and quercetin, quercetagetin glycoside was isolated from the ethyl acetate fraction of an ethanolic extract of the gynaceum part of the flowers.8,9

Cognition impairment and Alzheimer (AD) disease is the mostly associated with frequent of dementia in older people evidenced by permanent neuronal loss and atypical behaviour.10 Imbalance in cholinergic pathway have been reported, where deficiency of acetylcholine (ACh) occur due to hydrolysis by acetylcholinesterase (AChE).11 Besides acetylcholinesterase, butyrylcholinesterase (BChE) also inactivate ACh as well as butyrylcholine (BCh), which is regarded as a new target in drug discovery for neurodegenerative diseases.12,13 Most of the currently approved drugs such as rivastigmine, donepezil and galantamine are acetylcholinesterase inhibitors whereas memantine is the NMDA antagonist.11 Plant and many natural derivative have already been reported for acetylcholinesterase (AChE) inhibitory activity elsewhere by many researchers in recent decade.14 AChE inhibitors have also been prescribed widely in many other physiological and pathological conditions such as myasthenia gravis, glaucoma, dementia, and Parkinson’s disease besides its application in to AD.15 In recent year many medicinal plant and natural products from various region of the Globe have been evaluated for their cholinesterase inhibitory activity, even though there is still a necessity for investigation for newer, potent, enduring and safer AChE inhibitors. Oxidative stresses take part in many neurological diseases; both acute and degenerative disorders are thought to involve free radical’s reactions in tissue injury. Oxidative stresses is also considered as imperative neurotoxic pathway in cognition impairment due to formation of harmful free radicals which may leads to neuronal damage and cell death.16 Antioxidant treatment has demonstrated in improvement of cognitive function and behavioural deficits in various animal models as well patients with mild to moderate AD.17 Recently discovered AChE inhibitor such as memoquin affects various other pathways by demonstrating antioxidant activities, put off αβ aggregation, persuading tau hyperphosphorylation and acting as β-secretase inhibitor.18 Plant drugs and natural products with antioxidant and cholinesterase inhibitory activity could be considered as useful prospecting candidate for development of new molecules against cognition impairment. In present investigation we are reporting the antioxidant and choline esterase inhibitory activity of phenolic rich extracts of Bombyx ceiba flowers.

Flowers of Bombax ceiba were collected from BHU, Varanasi and authenticated by taxonomists of the Institute. Flowers were properly washed and dried (at 40°C in dryer). For the extraction dried flowers were powdered in an electric grinder, grounded material was dipped in hexane and ethanol successively, then it was filtered and evaporated to get viscous residue which were stored at 4°C for further evaluation.

The preliminary phytochemical estimation was carried out to determine the presence of alkaloids, saponins, anthraquinone glycoside, tannins and flavonoids.18,19

Total phenolics in B. ceiba extracts were quantified by the method described by Singleton and Rossi in (1965).20 The plant extracts (2, 10, 50, and 250 µg/mL) were taken and then folins reagent and 7.5 % sodium bicarbonate were mixed to it, the reaction cocktail was incubated at room temperature for 60 min. The Phenolic content was calculated, and results were expressed in terms of gallic acid equivalent/mg of extract (µg/mg of dried extracts) after taking absorbance at 760 nm against a reagent blank.

Total flavonoids content in the B. ceiba extracts were estimated by colorimetric method.21 B. ceiba extracts (2, 10, 50, and 250 µg/mL) were taken, to it 10 μL of aluminum chloride, 150 μL of methanol, 1M potassium acetate and 280 µL of double distilled water were added. Total flavonoids content was estimated by measuring optical density at 420 nm against a blank. Results were expressed as quercetin equivalent/mg of extract (QcE µg/mg of dried extracts).

DPPH radical scavenging assay is a commonly used method for the in vitro estimation of antioxidant potentials of extracts or molecules. DPPH characteristic deep purple colour bleaches on accepting hydrogen from a corresponding donor from plant extracts/phyto-molecules. The anti-oxidant potential of the different extracts of B. ceiba to scavenge DPPH radicals was assessed according to the method described by Chung et al. (2002) with some variations as earlier reported by Luqman et al. (2009).22,23 According to the described method, different concentrations of the samples (2, 10, 50, and 250 µg/ml) were added to 100 µl of methanol followed by 500 µl of tris-HCl buffer (pH 7.4) and 500 µl of the DPPH reagent. The reaction mixture was then incubated at 37ºC for 20 min in the dark and the absorbance was measured at 517 nm against a blank buffer and percent inhibition was calculated with respect to reagent control.

FRAP assay is based on the principle of reduction of ferric tripyridyl triazine complex to ferrous form.24 The change in absorption is directly proportional to the sum of reducing capacity of the electron donating antioxidants present in the reaction mixture. A reagent mixture consists of 200 mM ferric chloride 10 mM TPTZ, and 300mM acetate buffer (pH 3.6) in ratio of 1:1:10 were prepared. Different concentrations of the extracts (2, 10, 50, and 250 µg/ml) were taken and 50µl of water and 1.5ml of FRAP reagent were added to it. The reaction mixture was then incubated at 37ºC for 5 min and the absorbance was measured at 593 nm. The results were expressed in terms of FSE value which were deduced from the standard curve of ferrous sulphate.19

Phytochemicals, which have ability to reduce iron like radicals react with potassium ferricyanide (Fe3+) to form potassium ferrocyanide (Fe2+) and form ferric-ferrous complex. 19,27 Various concentrations of samples (10, 25, 50 and 100 µg/mL) were pooled with phosphate buffer (200 mM, pH 6.6) and potassium ferricyanide. The mixture was incubated at 50ºC for 20 min. The supernatant was then transferred to microplate and to it distilled water and freshly prepared 0.10% FeCl3 were added and absorption was read at 700 nm against reagent blank.

The estimation of the total antioxidant capacity (TAC) is based on method reported by Prieto et al. (1999).28 For the experiment different concentration of the extracts (10, 25, 50 and 100 µg/ml) were mixed with 1ml of the TAC reagent (600 mM ammonium molybdate, 250 mM phosphate monobasic and 600 mM concentrated sulphuric acid. The reaction mixture was heated on boiling water bath for 90 min. The optical density of the formed complex was noted at 695nm against a reagent blank and results were expressed as ascorbic acid equivalent.

The values of experimental data are expressed as mean ± SD. One-way ANOVA (Dunnet test) was used to calculate significant level in Graph pad Instat, data with p value <0.05 were considered as significant.

Results of phytochemicals estimation in B. ceiba extracts.

@Value of total flavonoid and Phenolic contents are expressed as mean ± SD of three replicate of experiments.

Hexane extract of B. ceiba was found to exhibit choline esterases more effectively than ethanolic extract, which was indicated by lower IC50 values as compared to ethanolic extract. Higher AChE and BChE inhibition were found in hexane extract i.e. 69.49 ± 0.66% and 60.49 ± 1.37% respectively. Findings of cholinesterase were significantly comparable with standard drug Galantamine. Results are shown in Table 3.

* All values are expressed as mean ± SD (n = 3). Significant difference (p < 0.05) was observed with respect to control group for hexane extract at higher concentration 250 µg/mL; @ highest concentration for reference control was 100 µg/mL.

As it has been evidenced that oxidative stress leads to cognition impairment, flower extracts were evaluated for their antioxidative potential. Findings of present study indicated that hexane extract of B. ceiba inhibited free radical generation more effectively than ethanol extract; results are depicted in Figure 1 and 2 respectively. Total antioxidant capacity and ferric reducing capacity of ethanolic extract was found better as compared to hexane extract, Figure 3 and 4 respectively. It was also observed that free radical and antioxidant activity of B. ceiba extract was comparable with lower concentration (10µg/ml) of reference control.

Total polyphenolic content in the B. ceiba hexane and ethanolic extracts were estimated using microplate assay method. Many phenolic compounds have been reported for the antioxidant activity of plant extract 19,27,30 and therefore natural polyphenols possess therapeutic potential for cognition impairment. Cholinesterases (ChE) are key enzyme in the cholinergic nervous system. Now a day’s therapies are being designed to modulate the cholinergic discrepancy in AD which mostly acts by inhibiting cholinesterases leading to cholinergic transmission with modest and transient therapeutic effects.31 Many recent investigations revealed that cholinesterase inhibitors could act on multiple therapeutic targets such as prevention of the formation of β-amyloid plaques, antioxidant activity and modulation of advance protein products. However, there is still necessitating for new cholinesterase inhibitor with better safety profile and higher central nervous system (CNS) penetration. Many plant based extracts and molecules have been investigated by bioassay-guided approaches for the identification of new cholinesterase inhibitors.31 Hydrolysis of AchE and BchE by cholinesterase’s are major problem in cognition impairments, therefore inhibition of esterases by plant extracts can be good strategy in search of safe drug.

Present investigation can conclude that hexane and ethanolic extracts from B. ceiba flowers have high phenolic extracts that may be responsible for antioxidant and cholinesterase inhibitory properties. Further study on chemical characterization of extracts and in vivo efficacy evaluation is needed.

Bhattacharya P , author. Implications of an aging population in India: challenges and opportunities. Living To. 2005;100:12–4 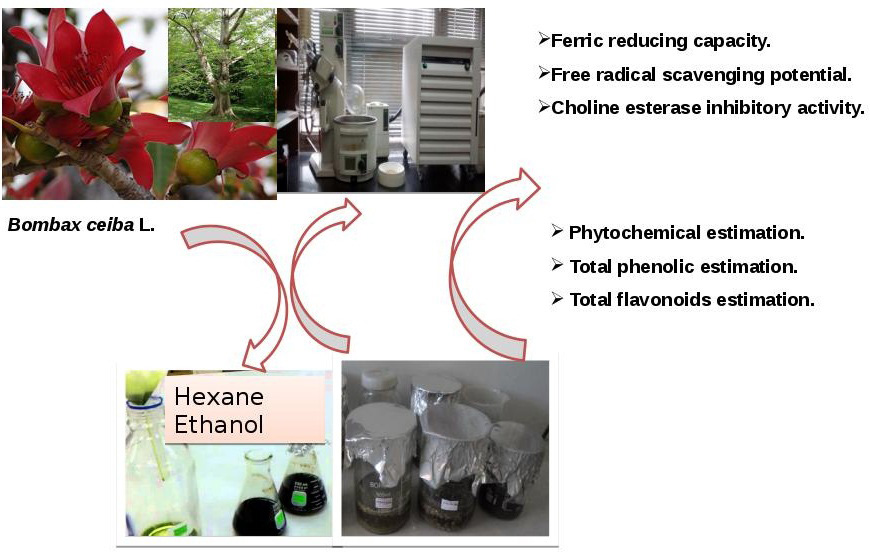