Yogic practices are known to affect the cardiac, respiratory and mental status of people.

To investigate if the regularly supervised training of pranayama and meditation affects the basic cardio-respiratory parameters and short-term-memory (STM) of mentally challenged young adults.

80 mentally challenged young adults attending a special school were randomly divided into the control group and Yoga group. Yoga group performed Naadishodhan, Kapalbhati pranayama and Aum Chanting under total supervision for 30 min daily for 3 weeks, except on Sundays. Control group was involved with the regular school curriculum. The parameters were measured twice, before (baseline) and after (follow-up) the study period. STM was evaluated under two subcategories, first by the ability to repeat the numbers in reverse order and second, repeating the words in the same order. Respiratory rate, pulse, systolic and diastolic blood pressures were measured as cardio-respiratory parameters.

Both groups had similar baseline scores. At follow-up, highly significant improvements were observed in Yoga-group as compared to control. In the Yoga-group scores of both the sub-categories of STM were higher, respiratory-rate and heart-rate were lower but was within normal range. However, both systolic and diastolic blood pressures of Yoga group showed no changes as compared to control.

The pranayama and meditation has beneficial influences on heart rate, breathing rate and STM of mentally-challenged people.

During 19th century brain used to be viewed in terms of coarse simple matter which does not change much after the childhood. Esquirol described the mental retardation (MR) as a disorder of development instead of a disease, which onset during childhood or adolescence. Now the brain is proved to be a continually changing organ, not only in its function but also in its structures. MR is established as a functioning disorder which includes abnormal intellectual functioning along with commensurate deficits in adaptive functioning.1

Yogic practices are known to affect the cardiac, respiratory and mental status of people. It opens up the possibilities that the persons with special needs can be trained and helped at any stage of their life to be able to lead a near normal social and family life.

Kapalabhati Pranayama involves forceful exhalation and effortless inspiration. It stimulates the abdominal organs, and improves autonomic balance. It promotes elimination of CO2 through the lungs which “quiets” the respiratory centers.2 It increases the blood O2 levels, which revitalize the neurons and other cells and activate the brain cells. It also probably revitalizes the entire brain and stimulates the inactive centers accountable for subtle perception, and thus, signifies its name “Shining Skull”.3 The cognitive domains such as, attention, memory retention capacity and visuo-motor speed was improved after the pranayama practice.4

This study was designed as a randomized control trial of “Integrated Yogic Practice”on mentally challenged children attending St. Agnes Special School, Mangalore. Ethical committee approval from the institution and written approval and consent of the principal of this special school was obtained prior the conduct of the study.

Study population comprised of clinically diagnosed 80 mentally retarded children having willingness to participate in this investigation and attending the same “special school”.

Inclusion criteria: clinically diagnosed mentally challenged children of either sex of chronological age between 12 to 25 years. They were unselected with regard to severity and types of mental retardation.

Children with severe mental retardation, who were not at all able to follow the instructions;

40 mentally challenged children who performed Nadishodhana pranayama Kapalabhati and Aum Chanting under total supervision for 30 min daily for 3 weeks, except on Sundays.

Consisted of equal number of children, matched for chronological age, sex, waist-hip ratio, BMI, mental ability and environmental background to that of the study group. They did not do yogic practices; instead, they were following their prevalent school routine.

The Respiratory rate, Heart rate, Blood pressure and Short-Term Memory (STM) Tests were measured twice, before (baseline) and after (follow-up) the intervention to assess the effect of yogic practice on respiratory and cardiovascular system. These parameters were recorded manually.

Respiratory rate was recorded by counting breaths per min. Three readings were taken within the span of one h and the mean of the three was taken as the final reading for the analysis.

The recording of the heart rate was done by counting the pulse for one min at radial artery. Three readings were taken within the span of one h and the mean of the three was taken as final reading for the analysis.

Manual recording of blood pressure was done with the help of a sphygmomanometer. Both palpatory and auscultatory methods were used to take the readings of systolic and diastolic blood pressure.

Tests were done according to the guidelines provided by Woodcock-Johnson III Tests of Cognitive Abilities.4,5 STM was evaluated under two subcategories, first by the ability to repeat the numbers in reverse order and second, repeating the words in the same order.

Subjects were asked to listen to a set of numbers and attempt to repeat in reverse sequence. E.g.

Subjects were asked to repeat a list of unrelated words in correct sequence. E.g.

Chi-Square test was applied to the data in frequency and the data, which could be reduced to proportions.

Unpaired t-test was applied to unpaired data of independent observation made in two separate groups.

Paired t-test, was applied to paired data of independent observations of a single sample only.

After 3 weeks of yoga practice, highly significant decrease in the mean respiratory rate and in the mean heart rate in the study group was observed as compared to the control group (p value >0.001; Table 2).

Both Systolic and Diastolic Blood pressures were found to be raised, but, change was non-significant in the study group as compared to the control group (p value >0.001; Table 2)

Among the two tasks of STM, “memory for words” showed improvement only in the group practicing pranayama and meditation (Table 3 & 4). Scores of “number reversed” were higher in both, study and control, groups at the follow-up (Table 3 & 4). Nevertheless, Scores of both subcategories, namely, number reversed and memory for words and of STM as whole were significantly higher in the study group as compared to the control group (Bar-Diagram 1).

Comparison of follow up scores of short-term memory between study and control group. 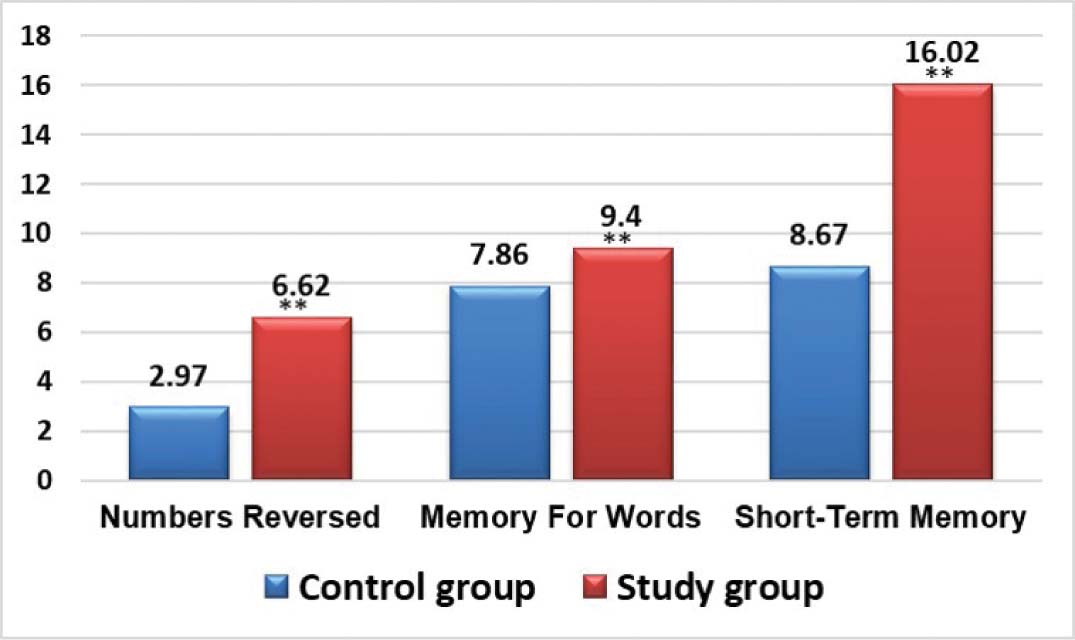 To the best of my knowledge, no previous study is available for comparison, investigating the effects of pranayama and meditation on “specific” cognitive abilities in mentally retarded individuals. However, one of the study reported the efficacy of Yoga as an effective therapeutic tool in the management of mentally retarded children.15

The results of the present study demonstrate the beneficial effects of pranayama and meditation on respiratory, cardiovascular and STM in mentally challenged children attending special school.

The decline in respiratory rate, suggests that daily practice of pranayama might modify the basic activity of the bulbo-pontine complex in such a way that it gets adjusted to the slower pattern of breathing than its basal rhythm. The lower respiratory rate found in this study is in agreement with the previous studies done on normal population investigating the effect yogic practice on respiratory rate.

Number reversing ability tests the short-term (working) memory, mainly a function of pre-frontal cortex, lasts for seconds to hours, during which processing in the hippocampus and amygdala lays down long-term changes in synaptic strength. A possible explanation for STM is pre-synaptic facilitation or inhibition. Working memory is a form of STM that keeps information available, for very short periods, while the individual plans action based on it.

In this study, two tasks were given to assess the short term memory of the mentally challenged subjects. Among the two tasks, the “memory for words” showed improvement only in pranayama and meditation doing group (Table 3 & 4) and the significantly higher follow-up scores of both subcategories of STM in study group shows that yogic practices may enhance the presynaptic facilitation or inhibition involved in the processing of Short Term Memory.

The cognitive functions have overlapping representation in brain. Many of them are interrelated and interdependent. Prefrontal areas are essential to carry out logical and reasoning processes. It stores “working memories” on a short-term basis. The neural circuitry for word formation is stored in the Broca’s area, in frontal cortex. For the comprehension of language somatic, visual and auditory association areas communicate with Wernicke’s area in temporal cortex. Nearly all functions of higher intellectual ability, as the ability to solve logical problems or the ability to read, are dependent on the language or verbal comprehension. with the help of Wernicke’s area, angular gyrus interprets the written words, names are learned through auditory input, and objects’ physical natures are learned through visual input.16,17 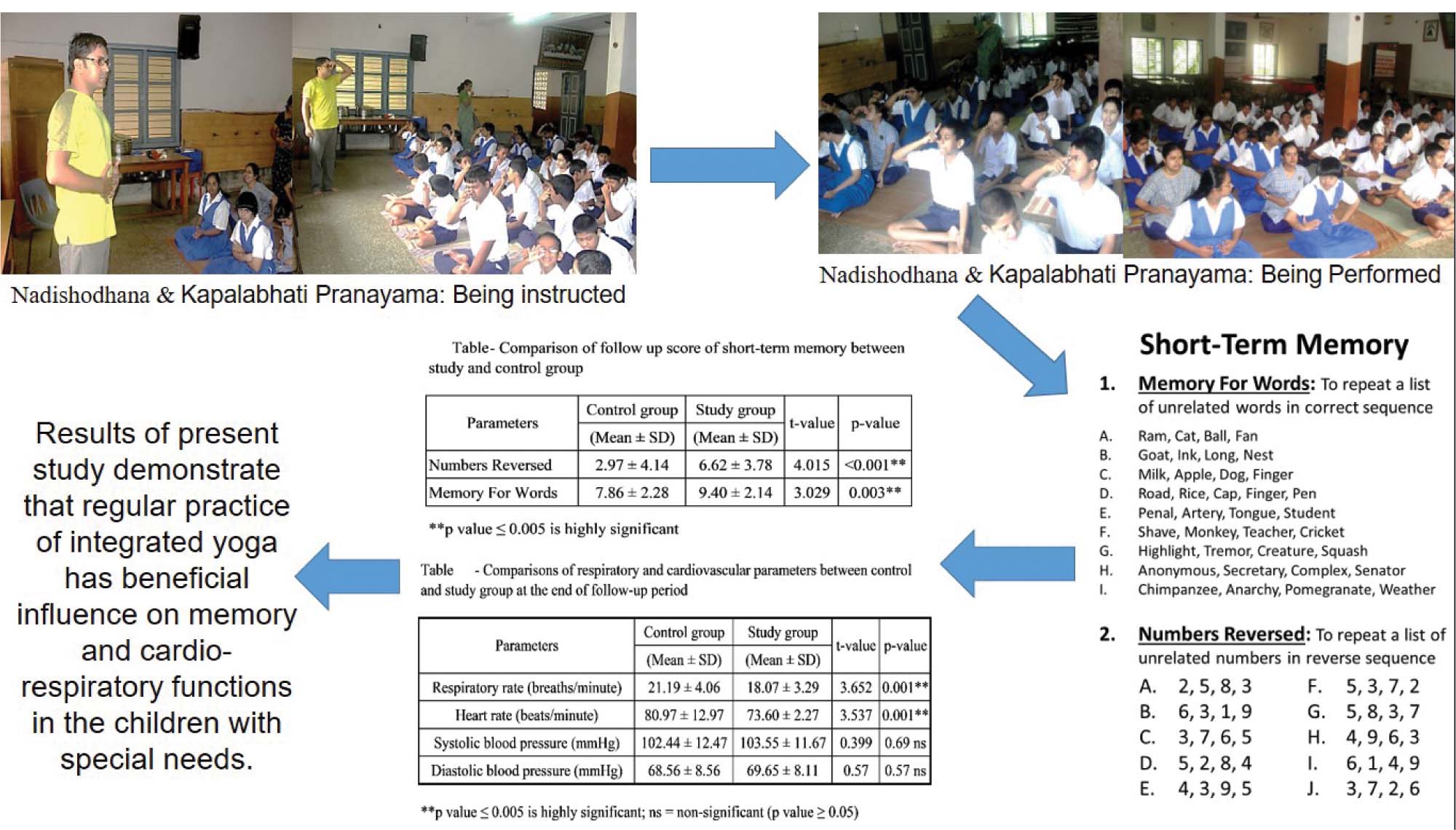 I would also like to convey my sincere gratitude and regards tothe principal and all the staffs and students of St. Agnes Special School for all their assistance and co-operation, without which this work would have been impossible to complete. 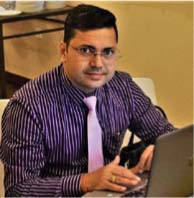 Dr. Kunal: He has obtained his MBBS and MD (Physiology) degree from Kasturba Medical College (KMC), Mangalore, Manipal Academy of Higher Education (MAHE). He did his “Tutorship” for 3 years in KMC, Mangalore and then worked for 4 years in Sikkim Manipal Institute of Medical sciences (SMIMS), Gangtok, Sikkim, SMU as Assistant Professor. Being in SMIMS he took care of various responsibilities, such as “Sports Chairman of SMU, Yoga trainer and In-charge of Yoga Lab, organised CME as Organising Secretary etc. He is currently working as Associate-Professor, Kasturba Medical College (KMC), Mangalore, Manipal Academy of Higher Education (MAHE), Karnataka, India. His field of interest is teaching, practicing and researching Yoga, Neuro, cardiovascular and pulmonary physiology. He has attended & presented papers at various national & international conferences, CME programs, Workshops, Faculty Development programs etc. He has received “The best paper award” at 23rd International Conference on Healthcare and Life-Science Research (ICHLSR), Dubai, UAE in the year 2017 for presenting this same paper.

[5] Conflicts of interest CONFLICT OF INTEREST It was self-funded research work and none of the author possess any financial or personal relationships with organizations or people that could inappropriately sway our work.

Shannahoff-Khalsa DS , author. An introduction to kundalini Yoga meditation techniques that are specific for the treatment of psychiatric disorders. The Journal of Alternative and Complementary Medicine. 2004;10(1):91–101