A Sarcoma is a cancer that arises from transformed cells of mesenchymal origin and affects all age groups; 15% are found in children <15 years and 40% occur after age 55. Approximately 60% of soft tissue sarcomas arises in the extremities, with the lower extremities involved three times often as the upper extremities. Rhabdomyosarcoma is a variety of soft tissue sarcoma and the third most common extra cranial malignant solid tumour in children and adolescents. Recent estimates place the incident of the disease at approximately 4.5 case per 1 million of children/adolescents with approximately 350 new cases in the United States each year. In most of the cases, there are no clear predisposing risk factors for the development of rhabdomyosarcoma which tends to occur sporadically with no obvious cause. Acharya explained different varieties of tumours under the broad heading of Arbuda and so also about the treatment. Here is a case study of a female patient aged about 51years (with OP -269202/IP-105922) diagnosed as a Mamsarbuda and managed with Kshara sutra and application of Arbudahara lepa. This treatment helped to terminate the invasion of fast growing tumour and also resulted in necrosis after application of Lepa. Through this treatment the patient showed statistically significant symptomatic relief in comparison to the initial intensity. The Arbudahara lepa and Kshara sutra treatment acts as pain management and palliative therapy here.

Approximately 20 different groups of sarcomas recognized on the basis of the pattern of differentiation towards normal tissue. For example, rhabdomyosarcoma shows evidence of skeletal muscle fibers with cross-striation; leiomyosarcoma contain interlacing fascicles of spindle cells resembling smooth muscle; and liposarcoma contain adipocytes. Rhabdomyosarcoma is histologically sub classified into the embryonal, alveolar, and pleomorphic variants. The rhabdomyoblast is the diagnostic cell in all types and contains eccentric, eosinophilic, granular cytoplasm rich in thick and thin filaments[2].

Alveolar rhabdomyosarcoma occurs in early to middle adolescence and commonly arises in the deep musculature of the extremities.

Pleomorphic rhabdomyosarcoma is characterized by numerous large, sometimes multinucleated, bizarre tumour cells. This variant is uncommon, has a tendency to arise in the deep soft tissue of adults, and can be confused histologically with malignant fibrous histocytoma.

Trauma or previous injury is rarely involved, but sarcomas can arise in scar tissue resulting from a prior operation, burn, fracture, or foreign body implantation.

Sarcomas in bone or soft tissues occurs patient who are treated with radiation therapy. The tumour nearly always arises in the irradiated field. The risk increases with time.

Congenital or acquired immunodeficiency, including therapeutic immunosuppression, increased the risk of sarcoma.

Li-Fraumeni syndrome is a familial cancer syndrome in which affected individuals have germ-line abnormalities of the tumour-suppressor gene p53. Germ-line mutation of the Rb-1 locus (chromosome 13q14) in patients with inherits retinoblastoma is associated with development of osteosarcoma in those who survive the retinoblastoma and soft tissue sarcomas unrelated to radiation therapy. Insulin-like growth factor (IGF) type 2 is produced by some sarcomas and may act as an autocrine growth factor and as a motility factor that promotes metastatic spread.

Our Acharyas have explained the different varieties of tumours under the broad heading of Arbuda and so also about the treatment. Acharya Sushruta have explained a definite clinical explanation of Mamsarbuda. He said due to Mushtipraharadi abhighata, the muscle tissues get damaged and produces swelling. This swelling is Vedanarahita (without pain), Snigdha twacha varnayukta (smooth skin colour), Apaka (non-suppurative), hard like a Ashma(stone), and Apracalyam (fixed). This type of selling most predominantly occurs in those persons who are having the damage of muscle tissues and this is called as Mamsarbudawhich is Asadhya in nature[3].

The explanation of Mamsarbuda impersonators with the current scenario of Rhabdomyosarcoma and thus the line of treatment of arbuda have been implicated in this case study. Acharya Sushruta says that the arbuda which is not on the Marmapradesha(vital parts) and having the alpamula (smaller base) can deal with the Kshara, Agni, Shastra etc surgical intervention by preserving the life of a person and Vrana shodhana can be done with the kashaya prepared out of Asphota (Hemidesmus indicus R.Br), Jati (Jasminum officinale Linn.), Karaveera (Nerium indicum Mill.) etc[4].

A 51 years old female patient, housewife of Vata-kapha prakruti, residing in urban area suffering with a painless mass over the right calf muscles with bleeding and foul smell for two years visited the outpatient department of Panchakarma on 10/08/2015with OPD number OP-269202 for Ayurvedic treatment. The patient was apparently healthy 2 years back then gradually she developed a progressive painless mass over the right calf muscles. Initially she consulted to the nearby physician and took conservative treatment for few days but does not get any relief. Then she visited to a multispecialty hospital in a district place and underwent for the investigation. In the Ultrasound of right calf muscle, they stated that probably muscle sarcoma (on 03/05/2013). When she underwent FNAC (Fine Needle Aspiration Cytology) test, it resulted as soft tissue sarcoma (Rhabdomyosarcoma) dated on 06/05/2013. Magnetic Resonance Imaging of right leg shown the impression as Well-defined lesion in distal 1/3rd of the leg in anterolateral aspect of fibula in intramuscular region in the form of hypo intense on T1 and hyper intense on T2 and stir surrounded oedema measuring 3.4 × 2.1 cm. Suggestive of soft tissue tumour probably Rhabdomyosarcoma (dated on 10/05/2013). There she has been suggested for the Surgery and she undergone through it. The surgical pathology report stated as Morphological features suggestive of Spindle cell Sarcoma-on 18/05/2013. The progression of swelling was persisted after the surgery and again she underwent surgery for second time but then also it does not stop. Finally, she suggested for the amputation of the right leg but the patient refused for the same and came to our hospital with this brief history.

When the patient got admitted in our hospital on 10/08/2015 with IP Number-103112 she presented with the large mass over the right calf muscle with excessive bleeding and foul smell. She was managed with the oral medications along with the blood transfusion (4 pints of whole blood) and daily dressing with Triphala Kashaya Dhavana and bandaging the part. She advised to continue the medication till next follow-up of 2 months. She came for the second visit and got admitted on 15/11/2015 with IP Number-105922 she managed with the tying of Kshara sutra over the area of base of mass and application of Arbudahara lepa beside the area of Kshara sutra for 7 consecutive days. The thread of the Kshara sutra has been tightened every day. Simultaneously the case is also managed with blood transfusion, daily dressing of a part and oral medication. After 7 days of the treatment patient felt significant changes in the symptoms of bleeding, foul smell and progression of mass. Patent got discharge and advised to continue the oral medication till next follow up.

In this case study the application of Kshara sutra and Arbudahara lepa over the Arbuda have given the significant changes in a symptomatic level and also the biochemical parameters shown the significant improvement. This treatment also helped for the improvement of the quality of life of a patient.

The property of Kshara is Ksharanat kshara i.e it does the Ksharana of a part where it is applied. The Kshara sutra not only does the invasion of the cells but also stop the further abnormal growth of tissues. As Acharya Sushruta mentioned the application of the Kshara karma or Agnikarma or Shastra karma on any kind of Arbuda have to be practiced with utmost care and sustaining the life of a patient is the prime duty of a Vaidya. In this case, although the disease is in advanced stage and subjective parameters were worsening day by day yet the significant symptomatic changes observed. The tumour was in such a advanced stage that it appeared as the Adhyarbuda stage so the gross parts of the Arbuda constrict with Kshara sutra and over the remaining parts Arbudahara lepa has been applied. The application of the Kshara sutra on 7 consecutive days made cutting of tumour tissues and the reduction in the size of the tumour. The bleeding also controlled by this treatment. The remaining area over which the Arbudahara lepa has applied shown the tumour necrosis and falling of necrosed tissue every day has been observed.

Rhabdomyosarcoma is a soft tissue sarcoma and bleeding tendency is more in such situation. The Kshara sutra has helped in the controlling the bleeding and also acted as chemotherapic agent. The Arbudahara lepa helped in tumour necrosis and thus it works as prevention for further tissue growth. Thus Arbudahara lepa and Kshara sutra treatment acts as pain management & palliative therapy here. This observation needs to be studied in more number of patients for better opinion to manage Rhabdomyosarcoma (Mamsarbuda). 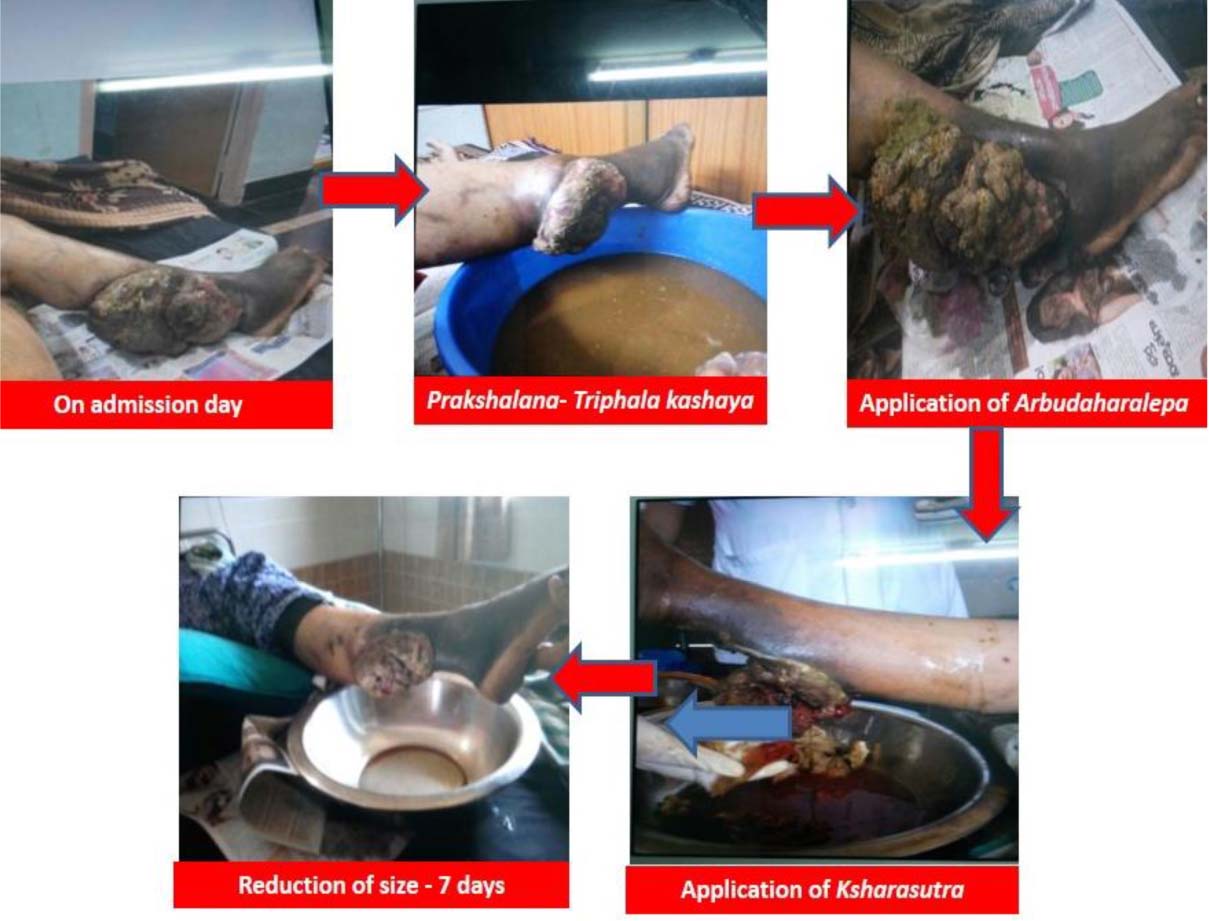 We would like to acknowledge all family members of the patient for providing valuable support and patient to conduct the treatment protocols.

[2] Conflicts of interest CONFLICT OF INTEREST None declared

Journal:
Journal of Ayurveda Medical Sciences
‹ Clinical evaluation of Beet root and Prickly pear in the management of Anemia: An Observational Study up Effects of Sri Lankan traditional medicine on radius and ulnar fracture in non-union state without removal of internal fixator ›