Clinical evaluation of Beet root and Prickly pear in the management of Anemia: An Observational Study

Chauhan, Gopani, Suhagia, Gupta, Patel, and Patel: Clinical evaluation of Beet root and Prickly pear in the management of Anemia: An Observational Study

In conventional medicine, various forms of iron are commonly prescribed, but these therapies have their noted adverse effects like constipation, gastric discomfort and poor bioavailability. The need is felt for search of safe and effective herbal preparation to improve the hemoglobin level. The aim was to evaluate the clinical efficacy and safety of beet root (Beta vulgaris L. ssp. vulgaris) and prickly pear (Opuntia elatior Mill.) as a haematinic agent.

Beet root and prickly pear confer the folkloric use as haematinic, betacyanin might be responsible for the erythropoiesis and present dose is safe for long term use. Although the concentration of betacyanin compared to beet root is less in prickly pear, but produce more efficacious action on erythropoiesis.

Anemia is one of the most common health problems in India. The problem is much more in rural than the urban area. The prevalence of anemia in 16 - 70 years age group was 47.9%. The prevalence of anemia was higher among females (50%) than males (44.3%)[1]. The highest prevalence of anaemia was seen in children <10 years followed by women and older adults. The vast majority of anaemia cases were microcytic, suggesting that iron deficiency was the main cause of anaemia. However, the prevalence of normocytic anaemia increased with age[2]. The red beet root (Beta vulgaris L.) is also an old folk medicine for anemia. Effect of beet juice on haemoglobin among adolescent girls were evaluated and found improvement in haemoglobin level (g%) from 10 to 12.67[3]. Ethanolic extract of beet root effectively raised the level of haemoglobin and erythrocyte count at dose 200 mg/kg in phenyl hydrazine induced anemia in rat[4].With respect to antioxidant activity or beet root, it ranked among the ten most potent antioxidant vegetables. Betalains, chief constituent, provide protection against oxidative stress-related disorders by acting as antioxidants which confirmed by many in vitro and in vivo study[5]. Netzel et al. characterised the renal excretion ofvaluable hydrophilic antioxidant phytochemicals such as phenolics and betalains in healthy humans after red beet juice ingestion[6]. Opuntia elatior Mill. is commonly known as Prickly pear. High levels of betalains, taurine, calcium, magnesium and antioxidants are noteworthy of Opuntia species exhibit various pharmacological activities, lending support to the rationale behind several of its traditional uses[7]. Fruits of Opuntia elatior Mill. evaluated for bronchodilatory[8], mast cell stabilization[9], analgesic and anti-inflammatory actions[10]. Author has evaluated haematinic action of prickly pear on HgCl2 - and phenyl hydrazine - induced anemia in rat[11,12]. In conventional medicine, various forms of iron viz. ferrous sulfate, ferrous fumerate etc. are commonly prescribed, but these therapies have their noted adverse effects like abdominal pain, constipation, gastric discomfort and poor bioavailability.

Owing to the gravity of the situation, need is felt for search of safe and effective clinically tested herbal nutraceutical oral dosage forms to improve the haemoglobin level in Anaemia. Based on the traditional and preclinical report, the present study’s aim to observe clinical efficacy and safety of beet root (Beta vulgaris L. ssp. vulgaris) and prickly pear (Opuntia elatior Mill.) in the management of anemia.

Eligible participants were enrolled based on inclusion criteria. Either of gender of age between 18 to 60 years, with haemoglobin between 8 to 10 g%. Exclusion criteria were pregnant, lactating, severe unstable renal, hepatic or any continuing blood loss conditions i.e. haematemesis, melaena. Haemoglobin (g%) investigation was done before the enrolment of participants and signed consent voluntarily to enrol in the trial.

Haematogolical parameters (Hb, total RBC, reticulocytes, ferritin) were assessed initially (day 0), mid (day 30) and end (day 60) of the treatment as primary efficacy variables. Liver function tests (SGOT, SGPT, Alkaline phosphatase) and Kidney function tests (S. Creatinine and Routine Urine Microscopy) were considered for safety aspect of the treatment on 0, 30th and 60th day. During the course of the trial treatment, if any serious condition or serious adverse events that required urgent treatment or if subjects themselves wanted to withdraw from the study, such subjects were withdrawn from the trial.

All the values are expressed as Mean ± SEM (standard error of mean). Data on clinical symptoms and objective tests before and after the treatment will be tabulated and analyzed by one-way ANOVA followed by Turkey’s multiple comparison tests. A level of p< 0.05 was considered as statistically significant. A level of significance was noted and interpreted accordingly.

Participants flow of efficacious parameters haemoglobin and total RBC presented in Flow chart 1. Pre- and post – treated Haematogolical parameters (Hb, total RBC, reticulocytes, ferritin) were estimated at day 00, 30 and 60 (Table 1). There is increase in Hb content and total RBC in both treatments after 30 days. On day 60, mean Hb content and total RBC were observed significant rise in BR group and PP group. The PP treated patients were observed little more recovery in Hb and almost double in total RBC compared to BR treated patients. There is no significant change was found in reticulocytes count in both treatments. The ferritin level was reduced on day 30 and 60 in both groups compared to day 00 and significant decreased on day 60 (p<0.01) in PP treated patients. The liver function parameters were estimated at the day 00, 30 and 60 and have been presented in Graph 1. After both treatments, there is no significant change in the liver function compared to day 00 readings. Estimation of serum creatinine as kidney function parameter showed no significant change in both treatments (Graph 2). There were not found any adverse effects and complications during study. Participates felt better improvement regarding their complaints like weakness, fatigue, palpitation, effort intolerance and breathlessness which are improved so they did not come for next check-up.

Phytochemicals from food and herbal are continuously investigated for medicinal properties. In conventional medicine, various forms of iron viz. ferrous sulfate, ferrous fumerate etc are commonly prescribed, but these therapies have their noted adverse effects e.g. nausea, vomiting, abdominal pain, gastric discomfort and constipation. The betalain pigments have recently emerged as a novel class of antioxidants. Their presence is limited to a few edible vegetables, such as red beet and prickly pear. In the present study, clinical evaluation of standardized capsules of beet root and prickly pear in the management of anemia have been carried out to establish efficacy and safety in light of folkloric use and preclinical reports The spectrophotometric and chromatographic analysis suggest that the external color of beet root and prickly pear depends on the relative concentration of betacyanins (red-violet pigments with maximum absorbance at around 535 nm) and estimation of total betacyanin equivalent to betanin is the best method to standardize the capsule. There is a major role of trace elements and vitamins in the erythropoiesis, presence iron and zinc were found in prickly pear and beet root capsules, respectively, while concentration of folic acid was more in prickly pear capsule. So the trace elements as well may be presence of betacyanin play major role in increasing Hb%. Stability studies suggest prickly pear capsule is more stable compared to beet root capsule. At the end of one year, color of beet root capsule powder was faded and turns to brown from red-violet compared to initial, while such degradation was not observed in prickly pear. This indicates prickly pear powder is more stable compared to beet root at room temperature for one year which is confirmed by estimation of total betacyanin. Beetroot is also being considered as a promising therapeutic treatment in a range of clinical pathologies associated with oxidative stress and inflammation. Its constituents, most notably the betalain pigments, display potent antioxidant, anti-inflammatory and chemo-preventive activity in vitro and in vivo[13]. The bioavailability of betalains were investigated in the simulated in vitro model of the human intestinal epithelium using Caco-2 cell monolayers to mimic a functional barrier[14-15]. It suggests that betalains can be absorbed in their unchanged form and produce biological action[16]. The protective action of prickly pear upon alcohol -induced damages in rat erythrocytes was reported[17]. Prickly pear supplements protect against oxidative damage induced by ethanol in rat’s erythrocytes and normalized the impairment of their osmotic stability and morphologic aspect. The progressive recovery of anemic rats responding to prickly pear may be due to increased erythropoiesis and/or antioxidant property of betacyanin. The betalains contents could confer to beet root and prickly pear a potential anti-oxidant activity. In the present study, on day 60, mean Hb content and total RBC were observed significant rise in BR group (10.59±0.32 g%; 4.35±0.27 1012/L,p< 0.001) and PP group (11.14±0.32 gm%; 9.25±0.39 1012/L,p< 0.001), respectively. Overall observation showed PP had more efficacious action on Hb, total RBC, reticulocytes and serum ferritin compared to BR. There is a surprisingly significant reduction of ferittin level in PP treatment which may indicates no role of iron in the increment of Hb and total RBC. The liver and kidney functions were normal after the treatment which indicates both are safe for long term treatment. As the intervention was implemented for both sexes and 18 to 60 years aged group, would benefit from beet root and prickly pear in the management of anemia. 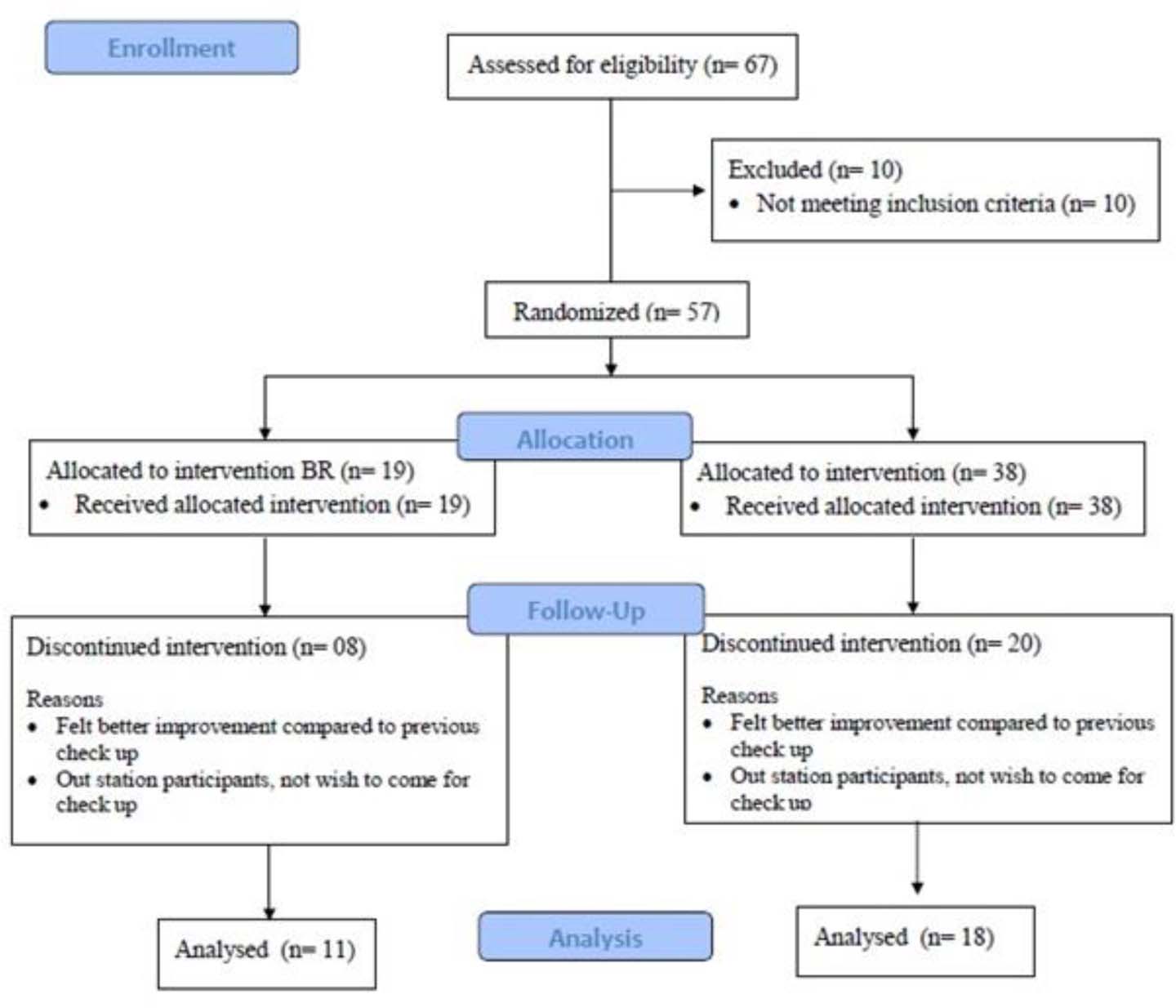 Effect of BR and PP on Haematological parameters

Effect of BR and PP on Liver function parameters

Values are Mean ± SEM, analyzed by one way ANOVA followed by Turkey’s multiple comparison test., * p < 0.05 for change difference at day 00 Vs 60.

Effect of BR and PP on Serum Creatinine 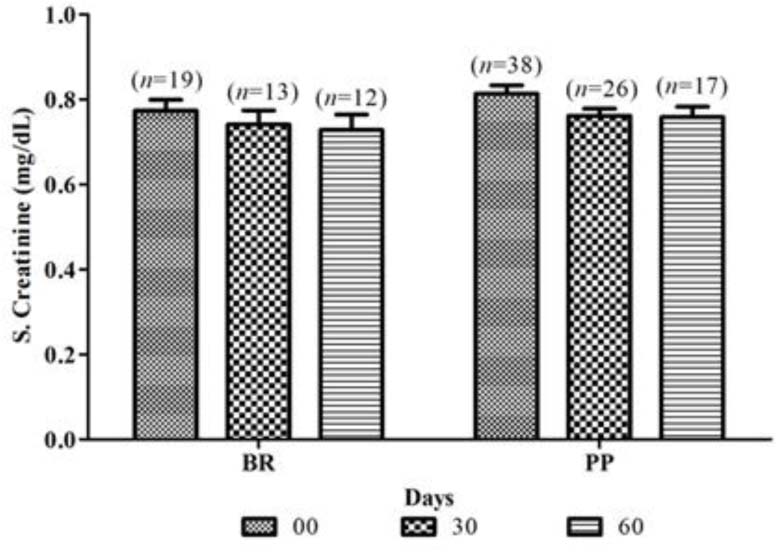 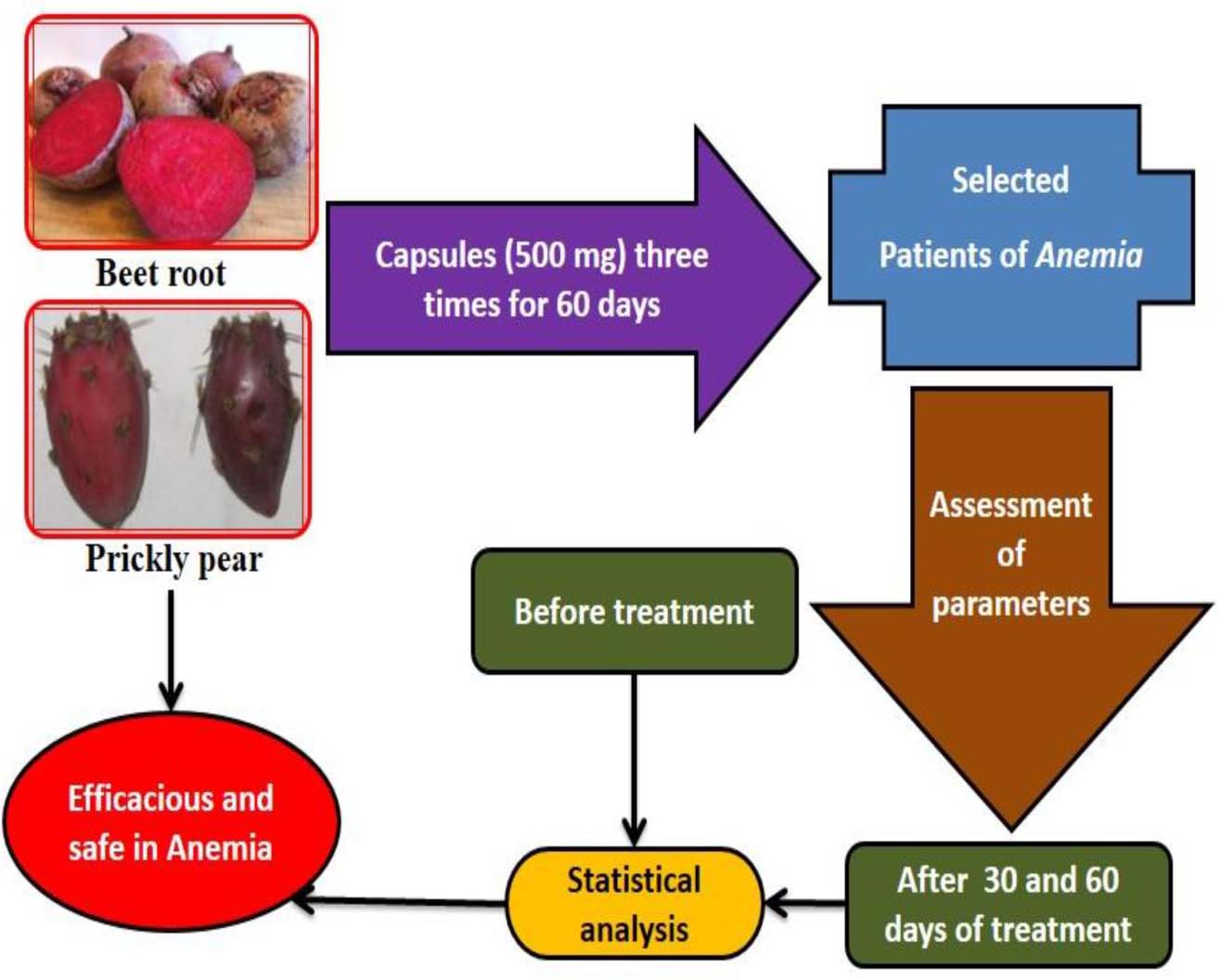 [5] Financial disclosure Source of support The research was funded by the Gujarat Council on Science and Technology (GUJCOST), Government of Gujarat, India vide letter no GUJCOST/MRP/2014-15/359.