Study of Health Profile of Children Placed in Remand Home

Children are one of the most vulnerable groups of societies and are at risk of many social evils. They should be identified and provided protective environment and loving care for their adequate growth and development.

To study the Health Profile of children placed in Remand Home.

This was a cross-sectional descriptive study carried out in a government run Remand home in Solapur.

Based on the pilot study, 200 children were included in the study. They were examined regarding their physical and psychological health. If necessary help from remand home authorities, parents and friends, social workers and teachers was taken. Physical examination of children and psychological examination with the help of Strengths and Difficulties Questionnaire was done.

In 5 different scales of SDQ scores, 6-30% children were found abnormal. Most of the children belonged to normal and borderline range. One or more physical morbidities were seen in 66.5% of children.

Children are greatest national asset and resource. Children should be allowed and provided opportunity to grow up to become healthy, skilful and robust citizens for the society. They should be provided social justice to serve as an effective tool to curb delinquency in juveniles.1

But in today’s world children are exposed to mental pressures both in rural and urban areas due to parental illiteracy, ignorance, competitions in various fields, extreme poverty or affluence, losing morals in adult populations and to variety of sources of information which they can easily access and which is at times beyond their scope of understanding and reason. So, it’s our responsibility to mould and shape their present conditions in the best possible way because children have a right to grow up in a nutritious environment, only then can they realize their full potential. According to the Indian constitution there should be separate jails for the juvenile prisoners or under-trials. They are Observation Homes formerly known as Remand Homes. It is essential to know the condition of children in Remand homes. Although physical and psychological status of children plays a very important role in behaviour of children and thereby development of delinquency, there are fewer studies available in the literature on this topic So, this study is directed to know the Health profile of children placed in a Remand Home.

It was a descriptive cross sectional study carried out in a Government run Remand home for children in the age groups of 6-18 years. There were two types of children admitted under remand home viz. Children in need of care and protection (CNCP) and children in conflict with law (CICL) taken care by Child Welfare Committee (CWC) and Juvenile Justice Board (JJB) respectively. CNCP included orphans, street children, those whose parents had financial problems, those with single parents etc. CICL include those who engaged in deviant or criminal behaviour.

So, the minimum sample size to be collected was 174. So, 200 children admitted during the study period (January 2014 to December 2014) were taken for the study.

The following exclusion criteria were used-

The data collection was done at the time of admission of child to Remand Home by using Strengths and Difficulties Questionnaire. If necessary help of the parent, guardian, social worker, police or remand home authorities was taken to know the past history of child if the child was not able to tell. Clinical judgement was also used in examination and scoring. Prior written consent for the study was taken from Child Welfare Committee and Juvenile Justice Board. Strengths and Difficulties questionnaire3,4 was used to assess psychological health profile in children. In this questionnaire, five scales were used to detect any abnormality in the child’s behavioural status. The scales were Emotional symptoms scale, Conduct problem scale, Hyperactivity scale, Peer problem scale and prosocial scale. The children were asked the questions as given in the questionnaire and the response of the child was recorded in terms of score 0-2 and total score in each scale was calculated. On the basis of total score, the child was categorized as with normal, borderline or abnormal behaviour.

The behavioural problems were assessed by classifying the children in five groups5 viz. antisocial problems, habit disorders, personality disorders, psychosomatic complaints and educational difficulties. The children were asked questions regarding the specific disorder and then they were categorized in that group according to the answer given by them using the clinical judgement. Only those who were found to have behavioural problems were included in the calculation and remaining were assumed as normal. Health and nutritional status of the children was assessed at the time of admission if the child had any sign or symptom of any morbidity then he/she was included in the category “morbidity present”. The weight and height of the children were taken and children were categorized as normal (-2SD to +2SD of height and weight), underweight (< -2SD weight for age) and stunted (< -2SD height for age) according to centre for disease control (CDC) growth charts.6,7 The children who were underweight and/ or stunted were included in the category of ‘malnutrition’. General and systemic examination of children was done clinically for signs of any other morbidity.

The present study was done in remand home on total 200 children which included both delinquents and non- delinquents.

Figure 1 shows the distribution of children according to psychosocial problems responsible for admission in remand home. More children were admitted for reasons such as conflict with law (39%) and financial constraints (25%). Other causes were orphans, ran away from home, street children etc.

Distribution of children according to psychosocial problem responsible for admission to remand home. 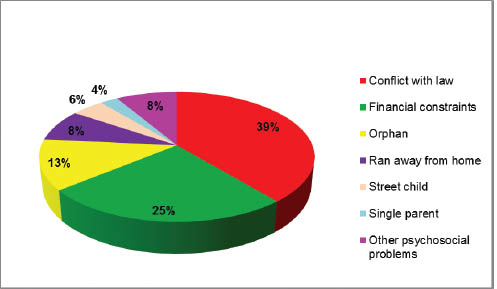 Distribution of children according to age and gender. 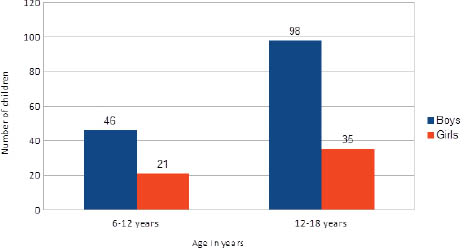 Figure 2 shows the distribution of children according to age and gender. Percentage of boys was more than girls and more number of children belonged to age group of 12-18 yrs.

Distribution of children according to type of behavioural problems 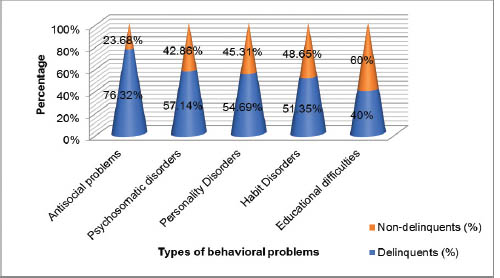 Distribution of children according to type of morbidity 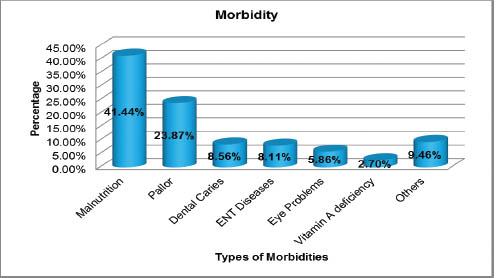 Gender-wise prevalence of morbidity among children in Remand Home

Relationship between morbidity among children and delinquency

[Note - Even if a single category of behavioural problems (among the five mentioned below), is present in a child, he/she was considered to have the problem in this study and is included in the group of ‘present’]

Table 2 shows that amongst 133 children with morbidity, maximum i.e. 85 (63.91%) were non-delinquents. The association of morbidity and reason for admission was not statistically significant (P>0.05).

Chaturvedi PK, Aggarwal AK et al8 1984, in their article of psychological study of inmates of a children’s home with special reference to their intelligence and aggressive behaviour found that out of 62 children, 19 did not manifest any psychiatric problem during the period of study, while 69.4% of these inmates had one or the other psychiatric problem. In a study conducted by Ahmad A. et al9 on 390 male adolescents in a school at Aligarh, the prevalence of psychosocial problems was 17.9%. The most common problem was educational difficulties found in 17.4% children, followed by substance abuse in 13.3% and conduct disorders in 9.2%. The difference in findings can be due to different criteria used for diagnosis of behavioural problems also due to difference in population pool from which children were admitted in remand homes.

In the present study, 133 (66.50%) children suffered from 1 or more morbidity. Most common morbidity found was malnutrition i.e. in 41.44% of children. Dental caries was found in 8.56% of children. The high percentage of morbidities in children can be due to the poor socio-economic status from which they come. Their familial background, social customs, educational and professional status of parents etc. are some of the other factors which also play an important role.

Bhola P, Kapur M10 2003 identified 23 school-based studies conducted over a period from 1978 to 2002. The total prevalence rates of morbidities ranged from 3.23% to 36.50%. The most prevalent disorders include enuresis, mental retardation and externalizing disorders such as conduct disorder and attention deficit hyperactivity disorder.’ Similar to this study, Chhabra P, Garg S 199611 studied 192 boys in the age group 6 to 12 years, living in a Children Observation Home in Delhi. BMI was used to grade the nutritional status according to which, 36.7% of the boys were found to be malnourished. Gaur A, Sujan SG12 2015, conducted a cross-sectional study in juvenile. Juvenile home boys had a caries prevalence of (54.5%) and girls (50.7%), whereas among the school group the boys had a higher caries prevalence of (64.34%) and girls (59.04%). Thus, overall range of morbidities among children is similar to the studies done in past. Common morbidities remain the same – malnutrition and dental caries.

It can be concluded that, although the psychological and physical profile of children differs in various studies done previously, among the children admitted in remand home, delinquent children and boys have higher prevalence of psychological problems and physical morbidities. It can be attributed to numerous biological and social factors affecting their growth and development, such as – gender of child, organic causes, child-parent relationship, marital status of parents, education and occupation of parents, history of addiction in parents etc. Such problems should be addressed while taking care of children in remand home. Usually these problems are overlooked and only placement of children in respective authorities (parents, foster parents, guardians or hostel) is given importance. This will not solve the basic problem of ‘inability of adjustment with the surroundings’. Children should be given due attention, love and care which is their basic right.

Authors are thankful to the remand home authorities, children and their parents for their support and cooperation throughout the study duration.

Weight-for-age charts, 2 to 20 years, selected weight z-scores in kilograms, by sex and age. Centers for disease control and prevention.[Internet]. [cited on 2014 Jan 12]. Available from: http://www.cdc.gov/growthcharts/zscore.htm.

Stature-for-age charts, 2 to 20 years, selected stature z-scores in centimeters, by sex and age. Centers for disease control and prevention.[Internet]. [cited on 2014 Jan 12]. Available from: http://www.cdc.gov/growthcharts/zscore.htm.