This cross-sectional institution based study was conducted after approval by ERB-BUMDC at Bahria University Medical and Dental College, Karachi from October-December 2013 which is the end of their academic year. The participants were 3rd year medical students. All the descriptive data was collected by using specially designed questionnaire, filled on one to one basis by taking an oral interview. Data was analyzed using SPSS version 20 and reported as frequencies and percentage.

Frequency of self-medication is high among 3rd year undergraduate medical students at the end of their academic year but majority of students are using medicines in appropriate dose, frequency and duration which may be due to influence of teaching pharmacology to them in this year of MBBS course.

Self-medication is defined as the ingestion of medicines with curative purpose but without specialized recommendation.1 It also includes procuring medicines without a doctor’s prescription, acquisition of new medicines by using former prescriptions, sharing medicines with others or using left-over and extra medicines kept at home.2 The increasing ease of access to pharmaceutical products, improving potential among people to deal certain illnesses by themselves; and extraterrestrial approach to information nowadays have overall increased the frequency of self-medication worldwide as reported by numerous studies.3,4 The self-medication prevalence is elevated all over the world reaching up to 68% in European countries, while upraising up to 92% in the developing countries which is perhaps due to characteristic variances in their socioeconomic and ethnic factors, discrepancies in health care systems such as health care approach, drug distribution and refund policies.5,6 In underdeveloped countries, people not only consume non-prescription medicines but also prescription drugs without any professional guidance. The World Health Organization put emphasis on rational use of self-medication.7

The negative upshots due to self-medication may include diminution of reserves, increasing resistance to organisms due to irrational use of antibiotics, problems due to drug-drug interactions and misdiagnosis, drug addiction, over and under dosing of medicines and adverse drug reactions.8 It is documented that 2.9 - 3.7 % cases of deaths occurred in hospitals as a consequence of drug-drug interactions.9 The youth is inspired by the media and the internet which is encouraging self-medication behavior.10 Self-medication practice among doctors develops during their undergraduate training.11 This study was especially designed to evaluate self-medication patterns among 3rd year undergraduate medical students at the end of their academic year, as pharmacology is taught to them in this year of MBBS course.

This cross-sectional institution based study was conducted after approval by ERB-BUMDC at Bahria University Medical and Dental College, Karachi from October-December 2013. Partakers were medical students of third year. Data was collected at the end of their academic year by using specially designed questionnaire, adapted from similar studies conducted previously.12,13 After the informed consent, respondents were given explanation about the purpose of the study. Each questionnaire was filled on one to one basis by taking an oral interview and confidentiality was ensured. This method of data collection excludes various problems of incomplete filling of the questionnaire, misunderstanding the asked questions and peer influence on filling the questionnaire.

The questionnaire consisted of two sections. The first section contained demographic information of the students such as age, gender, academic year and address etc. The second section consisted of a variety of open and closed ended questions concerned to self-medication practices.

Most of the study participants in our study followed allopathic system of medicines (95%). Similar results are found in other studies conducted on medical students in India. Among reasons, which provoked our students for self-medication were, “quick relief” (43%) followed by “ailments did not require consultation (21%). Similar findings were observed by Verma and Gupta.19,20 However, Kumar reported illness being too trivial as the common reason in his study.14

Most medicines had been purchased directly from “General medical store” (80%) indicating easy access to medicines in our set of connections. Whereas, 92% of students could recognize medicines by their generic name. In our study, 92% of students declared that they have medicine stock available at their homes. Literature supports that there is more prevalence of self-medication in people having availability of medicines at home as compared to people not keeping medicines. 87% of students cited that health care center or physician is far away from their home. This supports the finding of Baig that self-medication practice tends to increase in those who have health care center or physician far away from their home.21Common ailments for which self-medication was sought in our study were: headache (95%) and fever (87%), like the findings narrated by Abay and Amelo.22 However, Banerjee and Bhadury reported cough and common cold (35.21%) to be the principal ailments for seeking self-medication possibly due to increased incidence of respiratory tract infections in their country during the study period.16The drug groups employed commonly were: analgesics (95%), antipyretics (87%) and antibiotics (36%). This is coinciding with the results of Sonkakke et al.17 However, some studies conducted in developing countries have reported a higher use of antimicrobials for self-medication.23 Antipyretics were the common class of drugs self-medicated by majority of the participants in study conducted by Kumar. Similar observations were made in a study from South India and Ethiopia.22,18 Headache and Fever was the most common indication for self-medication in our study which is similar to observations made in Ethiopia. However, in studies from Western16and Southern part of India,18 cough and cold was the most common symptom for self-medication.

Frequency of self-medication is high among 3rd year undergraduate medical students at the end of their academic year but majority of students are using medicines in appropriate dose, frequency and duration which may be due to influence of teaching pharmacology to them in this year of MBBS course.

Authors are thankful to the students who participated in the study and provide valuable information.

[1] Conflicts of interest CONFLICT OF INTEREST None.

Osemene KP, Lamikanra A , authors. A study of the prevalence of self-medication practice among university students in southwestern Nigeria. Trop J Pharm Res. 2012;11(4):683–9 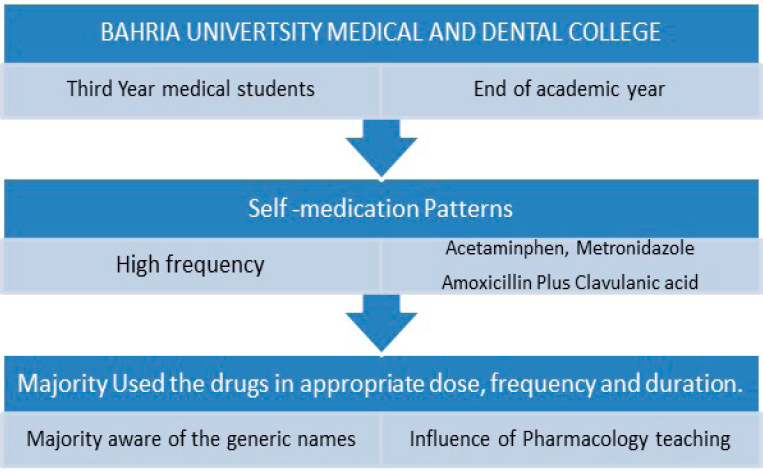