In silico Screening of Thiazolidine 4-one Derivatives for Antitumor Activity

Muralidharan and Subramaniam: In silico Screening of Thiazolidine 4-one Derivatives for Antitumor Activity

Thiazolidone derivatives reported best histone deacetylase inhibitory activity because of its structural parameters. Further study on thiazolidine-4-one derivatives and in vivo and in vitro study are necessary to develop target moieties for treatment of tumor.

Computer aided drug design (CADD) can be made in two phases: ligand based, or structure based with the availability of the 3D structure of a biological target, it is feasible to use a Structure based approach to evaluate and predict the binding mode of a ligand within the active site of the receptor with docking method.1 Now it is a popular technique used for increasing the speed of drug designing process. This is made possible by the availability of many protein structures which helped in developing tools to understand the structure function relationships, automated docking and virtual screening.

Thiazole is structurally related to thiophene, thiazole was first described by Hantzcs and Weber in 1887. The numbering in thiazole starts from the sulfur atom thiazolidinone are the derivatives of thiazolidine which belongs to an important group of heterocyclic compounds. Thiazolidine, with a carbonyl group of 2,4,5 have been subjected to extensive study in the recent years. Thiazolidinone in the presence of various reagent undergo different types of reaction to yield another hetero cyclic compound e.g. thiazole, benzimidazole, thiopyranothiazone, benzodiazepine, triazoles, benzothiophenes.

Thiazolidin-4-ones and its derivatives have been a great success in the field of chemistry and pharmacological properties i.e. Antifungal,9 Antioxidant,11 Cytotoxic,12 Antiinflammatory, Analgesic,13 Anti YFV (yellow fever virus) activity,14 Antitubercular,15 Antimicrobial,17Antibacterial.24 Antibacterial activity is strongly dependent on the nature of substituent at C-2 and N-3 position.29

The 4-thiazolidinone act on the different stages of the clinical research as anticancer, antithyroid, cardiovascular, antiviral drugs. Due to their various chemical property 4thiazolidionones can be used as a building blocks for forming the heterocyclic combinatorial rows and structure modelling of the potential biologically active compounds.30

The 5-membered ring compounds containing two hetero atoms at least one of which nitrogen, are collectively called the azoles. Thiazoles and isothiazoles contain sulfur and a nitrogen atom .Thiazole, or 1,3-thiazole, is a heterocyclic compound that contains both sulfur and nitrogen; the term ‘thiazole’ also refers to a large family of derivatives. Thiazole itself is a pale yellow liquid with a pyridine-like odor .The thiazole ring is notable as a component of the vitamin thiamine (B1).

Thiazoles are members of the azoles heterocyclic that includes imidazoles and oxazoles. Thiazole can also be considered a functional group. Oxazoles are related compounds, with sulfur replaced by oxygen. Thiazoles are structurally similar to imidazoles Thiazole rings are planar and aromatic Thiazoles are characterized by larger pi-electron delocalization than the corresponding oxazoles and have therefore greater aromaticity. This aromaticity is evidenced by the chemical shift of the ring protons in proton NMR spectroscopy clearly indicating a strong diamagnetic ring current. The calculated pi-electron density marks C5 as the primary site for electrophilic substitution, and C2 as the site for nucleophilic substitution.

Occurrence of thiazoles and thiazolium salts

Thiazoles are found is a variety of specialized products, often fused with benzene derivatives, the so-called benzothiazoles. In addition to vitamin B1, the thiazole ring is found in epothilone. Other important thiazole dervatives areben zothiazoles, for example, the firefly chemical luciferin. Whereas thiazoles are represented in biomolecules, oxazoles are not commercially significant thiazoles include mainly dyes and fungicides. Thifluzamide, Tricyclazole, and Thiabendazole are marketed for control of various agricultural pests. Another widely used thiazole derivative is the non-steroidal anti-inflammatory drug Meloxicam. The following anthroquinone dyes contain benzothiazole subunits: Algol Yellow 8, Algol Yellow GC, Indanthren Rubine B, Indanthren Blue CLG, and Indanthren Blue CLB. These thiazole dyes are used for dying cotton.

Various laboratory methods exist for the organic synthesis of thiazoles. The Hantzsch thiazole synthesis (1889) is a reaction between haloketones and thioamides. For example, 2, 4-dimethyl thiazole is synthesized from acetamide, phosphorus pentasulfide, and chloroacetone.

Preparation of molecules and ligands for docking

Molecular docking was performed using a crystallized histone deacetylase. The 3D structure for histone deacetylase was obtained from a protein data bank, polar hydrogens were added to a macromolecule by using Molegro, after which the structure was saved in file format that contains a protein structure with hydrogen in all polar residues. For ligands, the 3D structures of synthetic chromones were searched in the PubChem database, an SDF file for the 3D structure was converted into a PDB file by ACD Chem software. Six synthetic compound structures were minimized by computing gasteiger charges and the structures were saved in MVD format via Molegro.

Selection of Target Protein from RCBS

The preparation of the target enzyme with molegro tool involved in the addition of hydrogen atom to the target enzymes which is a necessary step for the computation of partial atomic charges histone deacetylase enzyme complexed with selective inhibitors with two chains with 4.88A0 and 4.13A0 respectively.

Computational analysis was carried out in chain A of 5LRB, six molecules were selected to study associated protein ligand interactions. All ligands were drawn by using chem. Sketch software.

All calculations were done on Intel core I5 laptop with windows 7 configuration. Docking was performed by using Molegro Virtual Docker (MVD) software package 6. MVD files were performed using flexible ligand docking, so the optimal geometry of the ligand will be determined during the docking. To obtain better potential binding sites in the alpha amylase (PDB ID: 5LRB), a maximum of five cavities was detected using default parameters.

The designed compounds were evaluated through docking techniques using MVD program. Designed compounds were docked on one of the crystal structures of histone deacetylase available through the RCSB Protein Data Bank. The compounds were scored based on the minimized ligand protein complexes. New ligands were docked into the empty binding site of histone deacetylate order to compare the binding affinity. ACR_1003 ligand with surrounding active site residues within 3.88 A°, hydrogen bonding interactions and the spatial orientation in binding pocket is given in Figure 3 The interacting residues surrounding the ligand within 3.13 A° distance are Glu167, Asn613, Lys704, His412.The six ligand molecules having minimum energy were screened out as the possible inhibitors for histone deacetylase given in the Table 1.

The six ligand molecules having minimum energy were screened out as the possible inhibitors for 5J8J given in the Table 1. 2-(2-chloro-5-hydroxyphenyl)-4H-chromen-4-one had the highest moldoc score of -40.20. It had one hydrogen bond. The Glu 167 of protein formed hydrogen bond with oxygen of chromone group of ligands. The bond length was found to be 3.1 A0. The active binding site of the histone deacetylase inhibitors was found to have bond length of 2.2 AO ,3.4 A0,2.9 A0 of Gly238, Thr237, Phe239 amino acids respectively which has molecular docking score of -65.784 and its hydrogen bond energy was found to be -8.9. 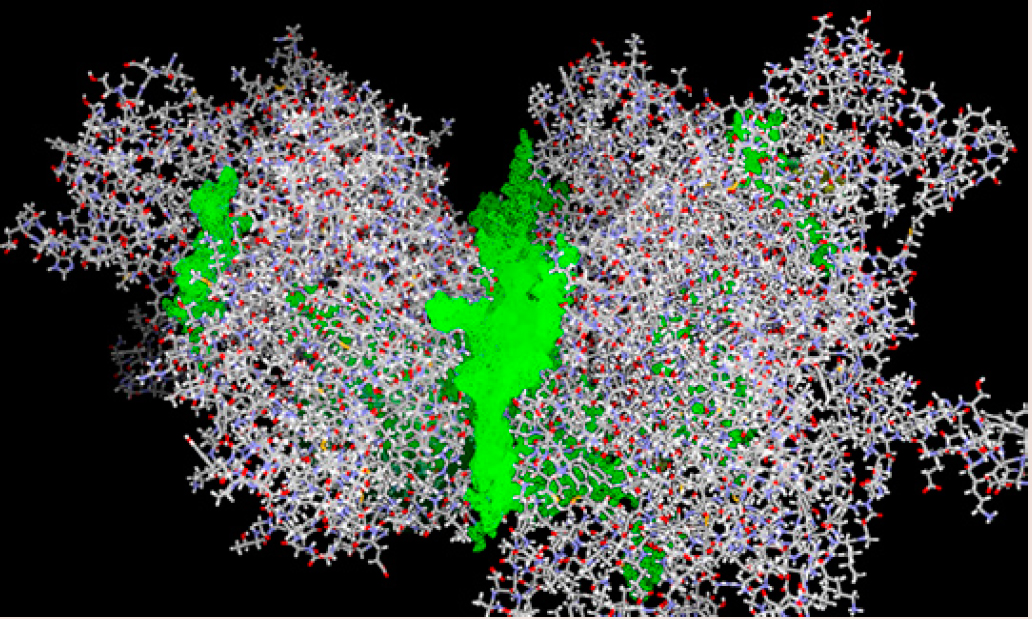 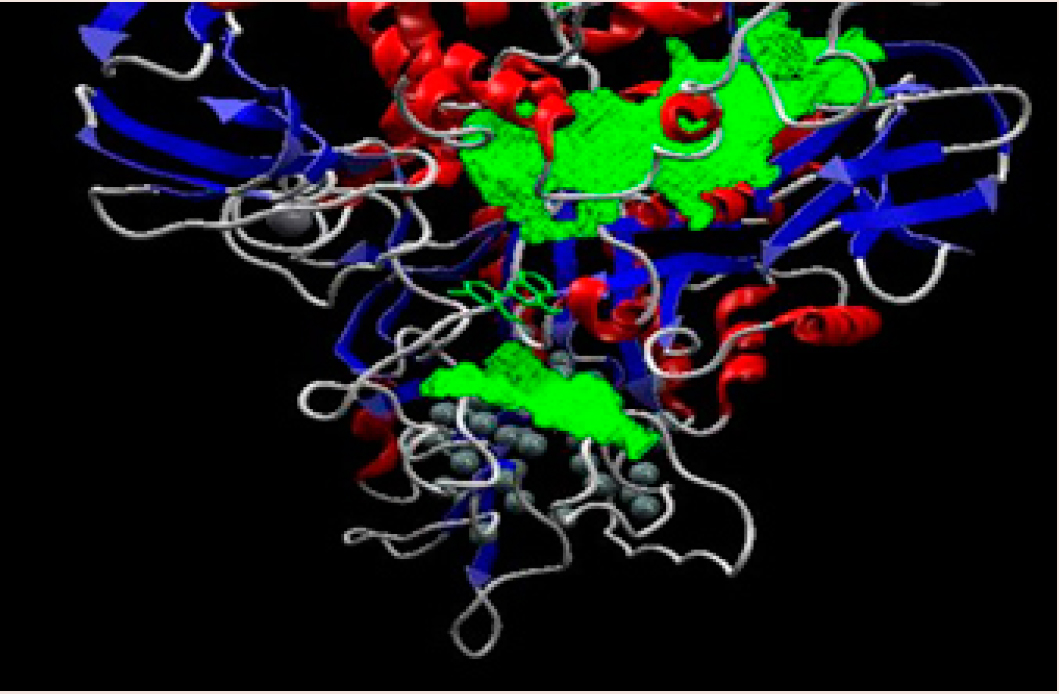 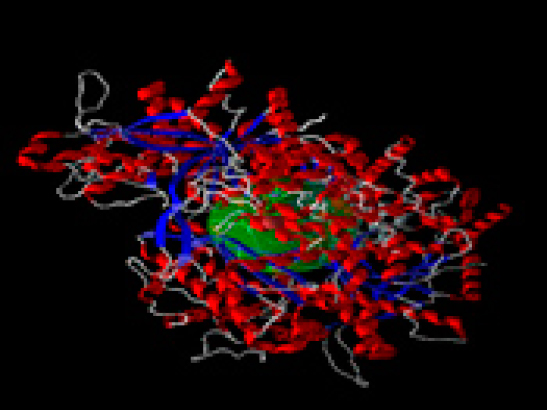 The active site is present in A ring of the protein. The residue bind with the ligand is same as that of the standard compounds docked. The residues found in the active sites are as follows are Glu167, Asn613, Lys704, His412. Table 2.

By using computational approaches derivatives designed showed good interactions with this atone deacetylase protein. 2-(4-fluoro-2-hydroxyphenyl)-4H-chromen-4-one- 200.575 kcal/mol against 5LRB (PDB ID) in docking analysis. Docking studies confirm that the main interaction of IVWI inhibitors with enzyme is Hydrogen bond and Hydrophobic interactions with the binding pockets made by OH group of chromones and aromatic aldehyde substitution of the ligands. This information has potential implications to understand the mechanism of IVWI related enzymatic inhibition reactions, and applicable in the prediction of more effective inhibitors and engineering 3D structures of other enzymes as well.

So, it is concluded that that 2-(4-fluoro-2-hydroxyphenyl)-4H-chromen-4-one,2-(4-hydroxy-2-hydroxyphenyl)-4H-chromen-4-one, 2-(4-chloro-2-hydroxyphenyl)-4H-chromen-4-ol could be a potent anti-tumortarget molecule against IVWI which may be worth for further clinical trials. In this study, computations on the interactions at the active site of one were carried out for Six Ligands. In future, it may be necessary to explore the development of potential new histone deacetylase inhibitors for treating cancer. The present study shall help in rational drug design and synthesis of new selective histone deacetylase inhibitors with predetermined affinity and activity and provides valuable information for the understanding of interactions between 5LRB and the novel 4-hydroxy chromones. 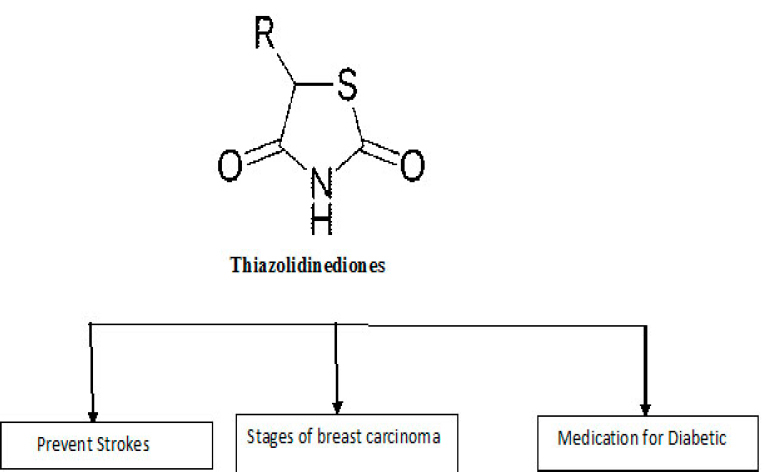 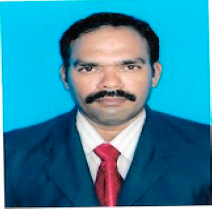 Dr. P. Muralidharan Currently working as Professor and Head in the Department of Pharmacology, C.L. Baid Metha College of Pharmacy, Chennai, Tamilnadu, India. He has having 81 nos. of research papers in International journals; 42 nos of research papers in national journals more than 72 nos. of presented as oral and poster presentations in National and International conferences; guided 30 M.Pharm students and 60 B.Pharm students, 03 Ph.D students.

Mrs. Gejalakshmi Subramaniam presently working as assistant professor, in the department of chemistry, Faculty of Pharmacy, Dr. M.G.R. Educational and Research Institute, Chennai-600025, Tamil Nadu, INDIA. she has having 8 nos. of research papers in International journals; 04 nos of research papers in national journals more than 08 nos. of presented as oral and poster presentations in National and International conferences.