Hypertension can be controlled by modifying lifestyle related risk factors and generating awareness about these risk factors among hypertensive patients.

To assess the life style pattern, knowledge, attitude and practices related to hypertension among diagnosed patients of hypertension attending a tertiary care hospital.

Across sectional hospital based study was conducted in a tertiary care hospital during May and June 2014.102 diagnosed patients of hypertension attending the Medicine out-patient department were included in the study by convenience sampling. Apre-structured questionnaire was used and data related to demographic profile, history of hypertension, knowledge, attitude and practices regarding hypertension etc. were collected. Data were analysed using Statistical Package for the Social Sciences version 20.

Out of 102 participants, 55.9% were males and the mean age was 42.98 + 11.85. The mean systolic blood pressure and diastolic blood pressure was 146.01 + 10.59 and 103.7 + 10.76 respectively. 50% of the patients led a sedentary life & only 13.7% were practicing fitness activities daily. 22.5% were current smokers, 12.7% were passive smokers and 8.8% were currently taking alcohol. About 26.5% patients were not concerned about their increased BP, 5.9% didn’t know any of the risk factors of hypertension &7.8% were unaware of the symptoms of hypertension. Logistic regression showed that occurrence of uncontrolled hypertension is reduced by 0.06 times in patients having satisfactory knowledge.

Intervention in the form of lifestyle education during hospital visits will be helpful to increase the awareness about modifiable risk factors, controlling blood pressure and preventing complications among these patients.

Hypertension is one of the most common diseases affecting humans worldwide. In 2004, high blood pressure was identified in GLOBAL HEALTH RISKS report by WHO as the fifth ranked factor for disability-adjusted life years.1 In 2010, high blood pressure was identified by Lim et al as the first ranked factor for disability-adjusted life years.2 Uncontrolled hypertension results in various complications (e.g., coronary heart disease, stroke, congestive heart failure, renal insufficiency and peripheral vascular disease).3 Hypertension has become a significant problem in many developing countries experiencing epidemiological transition from communicable to non-communicable chronic diseases.4 Hypertension has also been attributed as one of the leading causes of death and disability in the developing countries.5 The emergence of hypertension and other cardio vascular diseases as a public health problem in these countries is strongly related to the aging of the populations, urbanization, and socioeconomic changes favouring sedentary habits, obesity, alcohol consumption, and salt intake, among others.6 Assessment of knowledge, attitudes, and practices (KAP) is a crucial element of hypertension control, but little information is available from developing countries where hypertension has lately been recognized as a major health problem.7

Hypertension and its complications can be controlled by modifying lifestyle related risk factors, and generating awareness about these risk factors among hypertensive patients. So this study was planned to assess the life style pattern, knowledge, attitude and practices related to hypertension among diagnosed patients of hypertension attending a tertiary care hospital.

The study subjects were interviewed using a predesigned, pretested and semi structured questionnaire. Data in respect of age, sex, education, years of schooling, residence, per capita monthly income, family size, co-morbidity, life style related factors, history of hypertension etc. were collected. The knowledge, attitude and practices regarding hypertension, source of knowledge etc. were collected. The knowledge regarding risk factors of hypertension was evaluated using 11 questions, each correct answer having a score of 1 and the tool was validated by experts in this field. Attitude and practices regarding control of hypertension were assessed. Recording of height, weight & blood pressure were done using calibrated instruments.

Among the study population, 88.2% belonged to the upper social class, 8.8% belonged to middle and 2.9% belonged to low social class (Modified BG Prasad scale 2014 update). In the present study, 65% of study subjects belonged to nuclear families and 35% belonged to joint families. Majority (84.3%) were married and living with their spouses.

Study of lifestyle related factors revealed that 50% of hypertensive patients were leading sedentary life & only 13.7% were practicing fitness activities daily. 86.3% were not practicing regular walking or any fitness activities. 78.4% were taking mixed diet, only 18.6% were taking fruits daily and 81.4% were not taking or occasionally taking fruits. About 41% of the study subjects never used tobacco in any form and 22.5% were current smokers. Alcohol consumption was found in 8.8% of the subjects and 12.7% were exposed to passive smoking either in work place or home. (Table 1).

Although suffering from hypertension, many of the patients lacked proper attitude to control their disease. About 26.5% patients were not concerned about their increased BP, 22% believed that hypertension is not a serious health issue and 31% opined that it can be controlled by medicine alone. Only 35% of patients were doing regular monthly blood pressure check-ups (Figure 3). The knowledge about risk factors of hypertension was assessed on an 11point scale. The mean score was 4.73 (95%CI; 4.32, 5.31). A score above 5 being considered to be satisfactory, only 35% of the patients had a satisfactory knowledge score. There was a negative relationship between risk factor score and systolic blood pressure with a correlation coefficient of r=-0.212(p<0.05) i.e. as the risk factor knowledge score increased, the systolic BP decreased. The knowledge score showed a positive association with the socio-economic status (per-capita income) with a correlation coefficient of r=0.111, but it was not statistically significant. Considering blood pressure more than 140/90 mmHg among hypertensive patients as uncontrolled BP, there was significant association between unsatisfactory knowledge level and uncontrolled BP among hypertensive patients (x2=10.36; p=0.001). Logistic regression showed that occurrence of uncontrolled hypertension is reduced by 0.06 times in patients having satisfactory knowledge (Table 2).

Linear regression model demonstrated that SBP increased by 0.321 times with each kg increase in weight (Table 3) and 0.89 times with rise in BMI and it was statistically significant (p<0.001) (Table 4).

Hypertension is a major health problem in India as in other countries. Various factors have been found to be responsible for causing hypertension but people are not well aware of these risk factors. In our study the most common risk factors known to the patients are increased salt intake (61.8%), obesity (58.8%), and family history of HTN (52%), lack of regular exercise (43%), tobacco (39.2%) and alcohol intake (28.4%). In a study conducted at Gulf Medical University Ajman, United Arab Emirates, the risk factors known to patients were stress (75.5%), high cholesterol (73.6%), obesity (73.6%), smoking (71.8%), increased salt intake (69.1%), high calorie diet (62.7%) & physical inactivity (47%).8The differences of results may be due to difference in study settings, difference in educational background of patients, lack of awareness programmes etc. So there is need for increasing awareness about the risk factors of hypertension to prevent and control hypertension.

Knowledge of patients about symptoms of Hypertension. 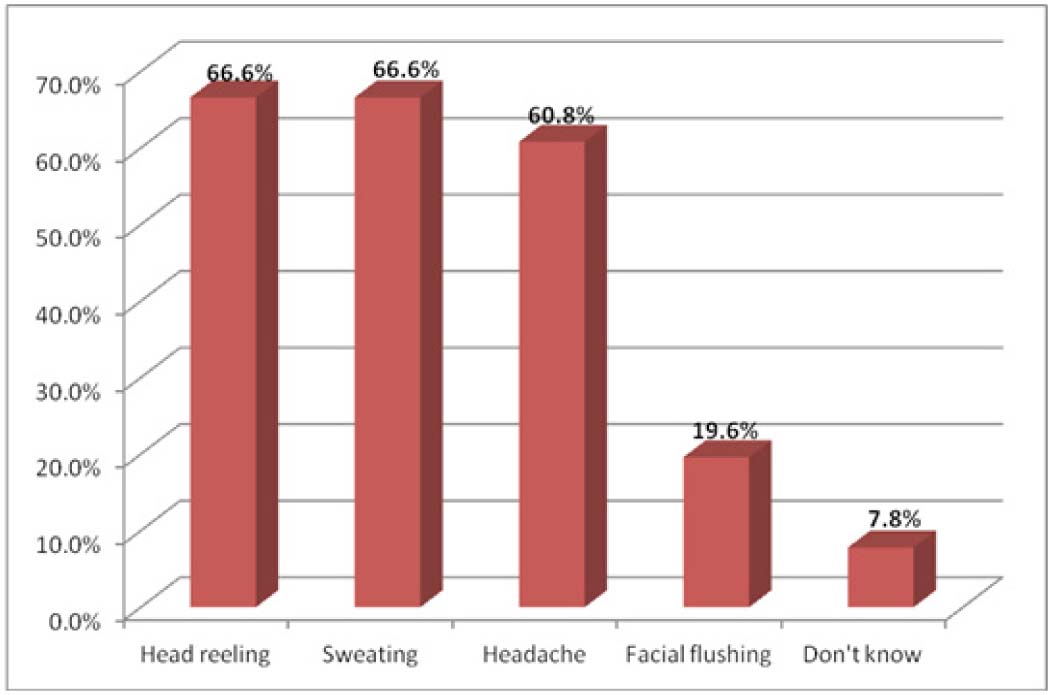 Knowledge of patients about risk factors of Hypertension. 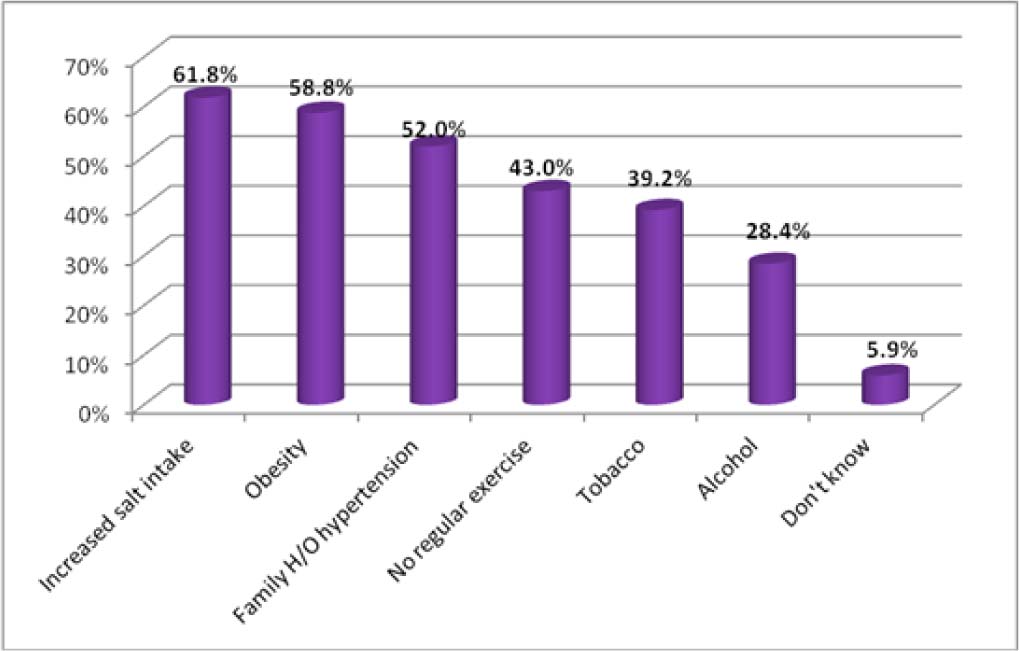 Attitude and practices among patients with hypertension. 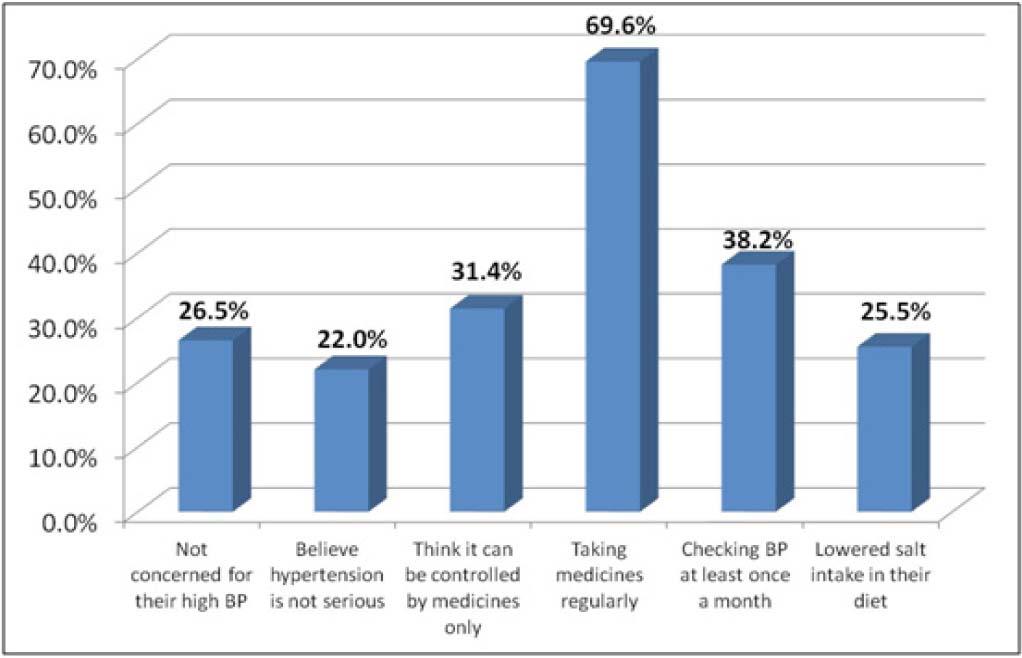 Studies conducted in different parts of India have shown correlation of smoking or tobacco use with hypertension.10 A study from Mumbai showed that 13.23% of the patients were smokers,9 whereas it was 9.46% & 2% in studies conducted in Dar es Salaam11and Ludhiana12respectively. In our study tobacco use in the form of smoking and chewing was found in 22.5% and 55% of the subjects respectively. This shows that there is an urgent need of behaviour change communication activities to decrease the tobacco use.

Alcohol plays a role in developing hypertension by different mechanisms like stimulation of sympathetic nervous system, direct pressure effect on vessel wall and production of adrenocorticoids In studies conducted at Mumbai, Dar es Salaam11& Ludhuana,12 the prevalence of alcoholics among hypertensive patients was found to be about 25%, 30% and 6% respectively. In our study, only 8.8% of the patients were found to be alcoholic. Physical activity profile found to differ across different studies. In the study done in Ludhiana,12 76% patients were leading a sedentary lifestyle, while it was found to be 50% in our study. Regular physical / fitness activity was not done by 86.3% of our study subjects, which was much higher than that reported (47.6%) in the study done at Dar es Salaam.11

Obese patients have poor control over hypertension. In the Framingham study13 it was observed that there was 6.5 mm Hg rise in SBP with 10% increase in weight. Our study demonstrated that SBP increased by 0.321 times with each kg increase in weight. A study by Marilyn M. Schapira et al done in USA14 did not find any significant association of knowledge scores with diastolic or systolic BP levels, but we found that hypertension status improved by 0.06 times with increase in knowledge level.

Intervention in the form of lifestyle education among hypertensive patients during hospital visits will be helpful to increase the awareness about modifiable risk factors. This will enable them to adopt and practise a healthy lifestyle, which will help in controlling the blood pressure and preventing hypertension related complication.

We hereby transfer, assign, or otherwise convey all copyright ownership, including any and all rights incidental thereto, exclusively to the journal, in the event that such work is published by the journal.

[1] Conflicts of interest CONFLICT OF INTEREST All authors declared no conflict of interest.