Cardiac MR(CMR) has an important role in the evaluation of patients of suspected cardiomyopathies and also helps to differentiate between the various types based on the type of late gadolinium enhancements(LGE’s). We describe a characteristic Swiss cheese myocardium appearance in a patient with hypertrophic cardiomyopathy (HCM) using automatic scar analysis algorithm using low < 2SD scale threshold weighting to assess the replacement and interstitial fibrosis along with T1 mapping to quantify it.

Cardiac magnetic resonance imaging (CMR) is increasingly being used for the evaluation of patients with suspected cardiomyopathies as it provides detailed myocardial morphology including fibrosis evaluation which has diagnostic and prognostic implications for the patient.1,2 The diagnosis of hypertrophiccardiomyopathy (HCM) traditionally is based on the echocardiographic findings of asymmetric left ventricular hypertrophy and systolic anterior motion of mitral leaflet. CMR due to superior spatial resolution is being used as adjunctive technique in patients of HCM with phenotypic heterogeneity. Due to improvement in techniques, CMR is now being tried for prognostic evaluation of HOCM. Late gadolinium enhancement (LGE) sequences enable the identification of myocardial fibrosis, which is associated with poor outcome.3

We describe the use of an automated scar algorithm technique using signal weighting using low gray scale threshold on late gadolinium enhanced Images which gives a characteristic Sweese Cheese appearance of the myocardium due to mixture of fibrosis seen in the HCM patient. The quantification of fibrosis was done using T1 mapping on MRI to estimate extracellular volume (ECV) of the myocardium. The use of these novel techniques can not only be diagnostic but also give prognostic implications.

Diagnosis of HCM on CMR has been based on the patterns of asymmetric left ventricle hypertrophy alongwith demonstration of myocardial fibrosis on LGE images. The fibrosis seen in HCM is of mixed type i.e. replacement, interstitial and plexiform type with overlapping patterns which alone cannot be differentiated from scarring seen in other types of cardiomyopathies seen as late gadolinium enhancements(LGE’s). The histological correlate of LGE in HCM seems to be increased myocardial collagen rather than myocardial disarray which is also observed on histological specimens and is postulatedto reflect microvascular ischemia and microscopic replacement fibrosis due to small intramural coronary arteriole dysplasia.5,6 Another alternative hypothesis for LGE in HCM suggested that the causative sarcomeric gene mutations might lead to a phenotypic expression of increased myocardial connective tissue deposition,7 Hence there is a need to detect myocardial fibrosis and quantify the excessive collagen deposition in the Myocardium. Detection of myocardial fibrosis by LGE is variable in different HCM cohorts and is between 40-80%. Traditionally found patterns are patchy mid myocardial LGE, patchy LGE at RV insertion points and diffuse confluent trans mural pattern. Detection of LGE in HCM alsohas association with ventricular arrhythmias, SCD and the pathophysiological link has been shown on Holter monitoring.8,9,10 Therefore robust detection and characterization of collagen could form the basis for risk stratification of HCM to be considered for ICD therapy. 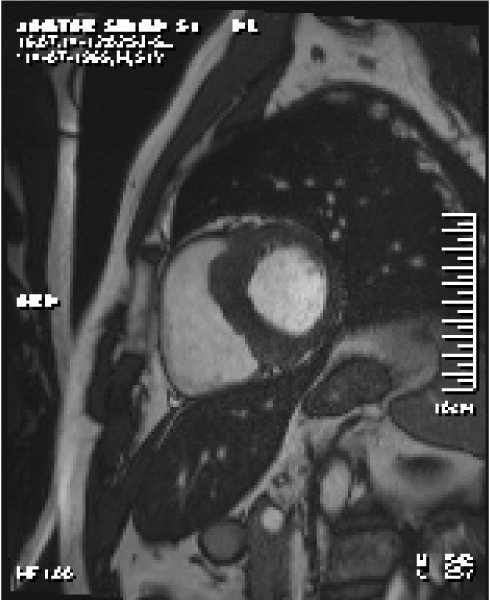 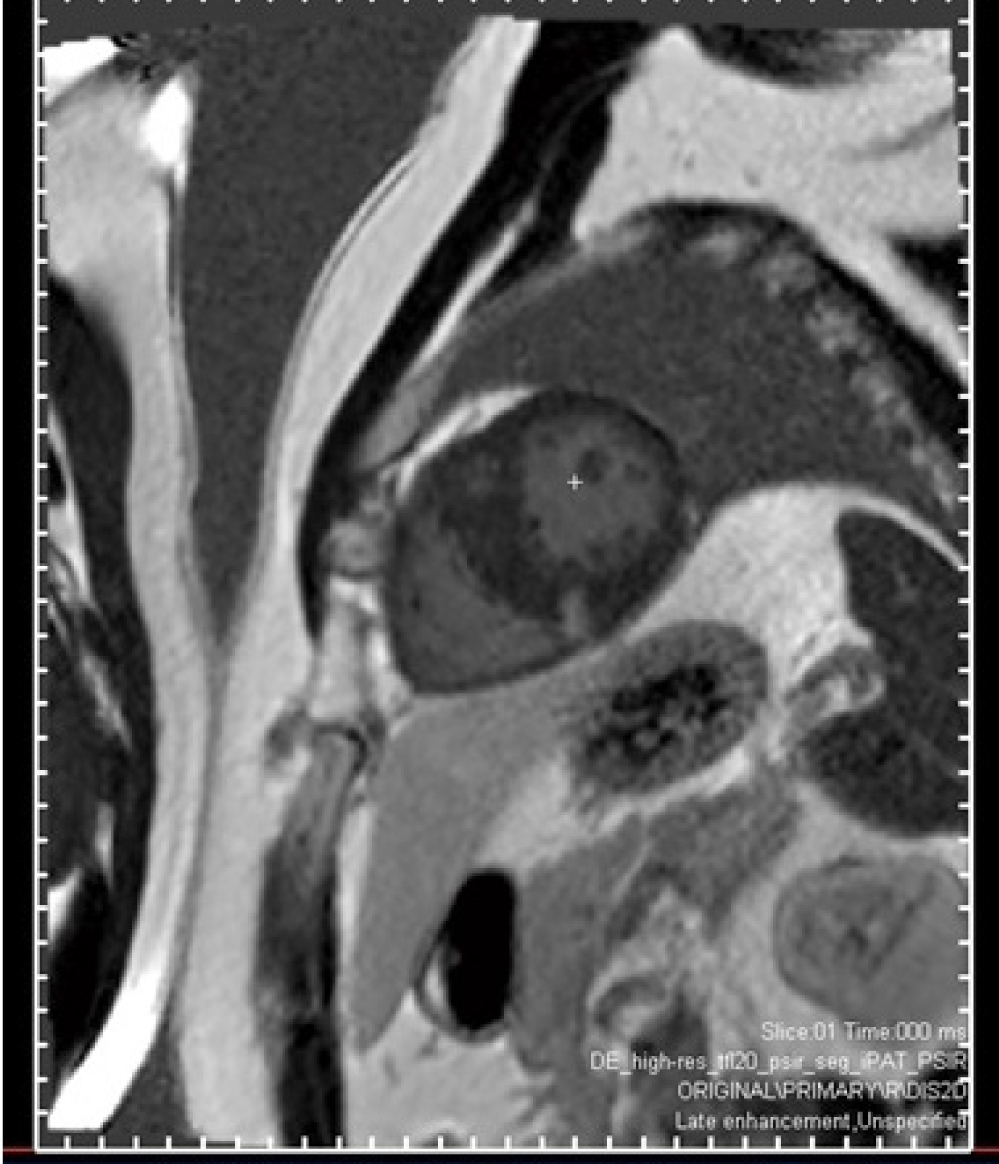 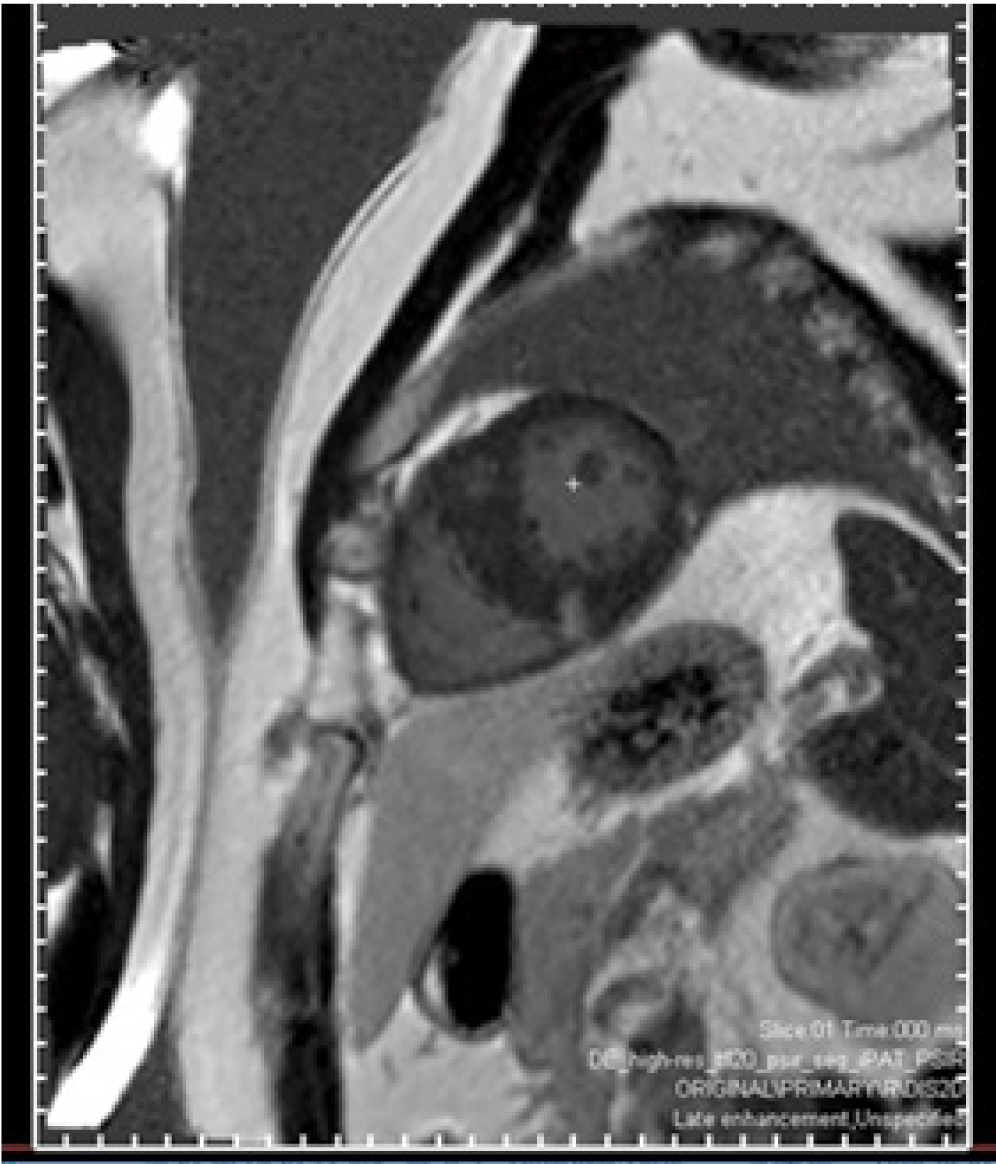 Swiss Cheese appearance of the fibrosis with areas of replacement fibrosis as orange and interstitial fibrosis as yellow with inset showing pictorial depiction of swiss cheese. 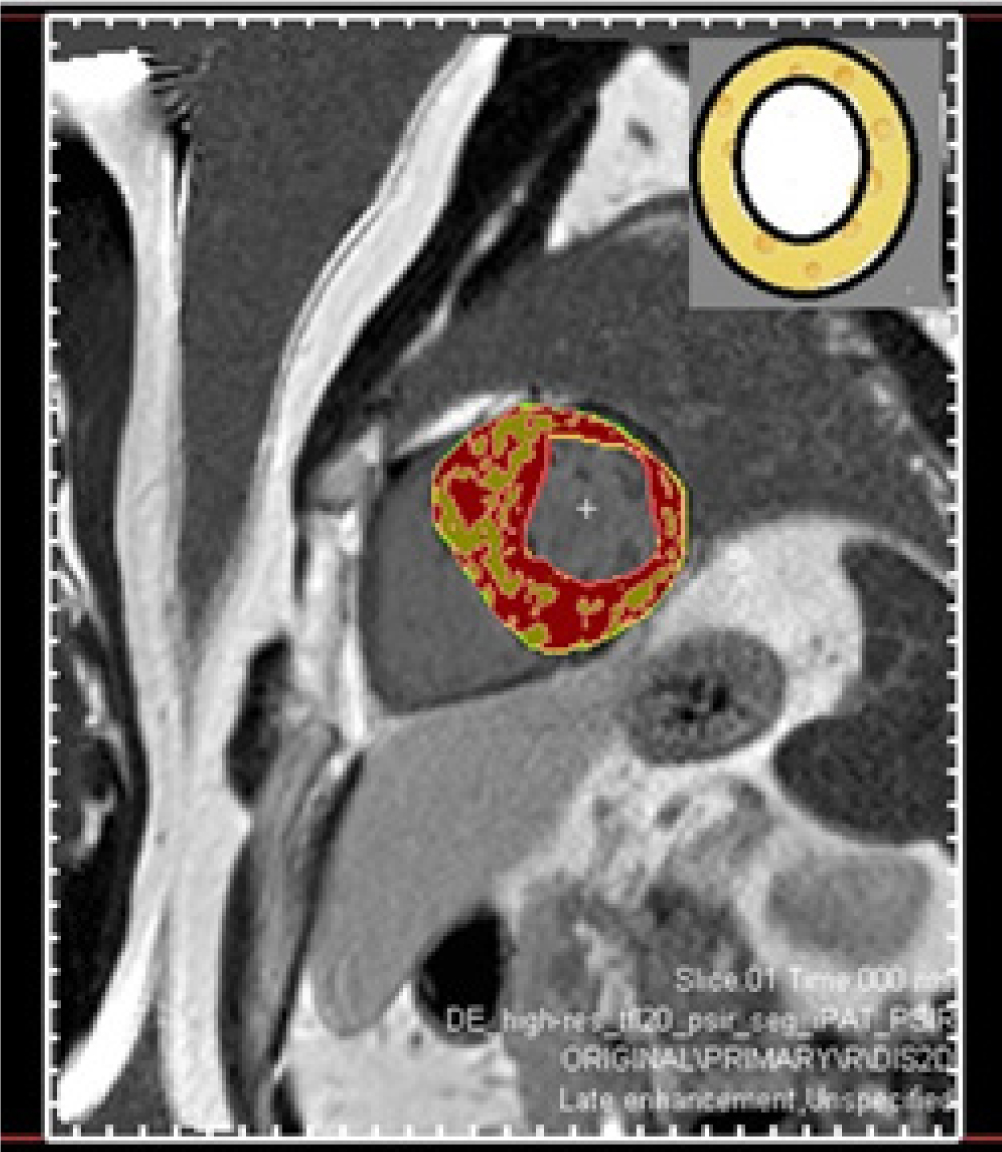 So far collagen has been difficult to detect and quantify on imaging mainly due to diffuse nature of the disease process and also due to limitation in processing techniques. Native T1 mapping and ECV estimation are two novel techniques to diagnose interstitial fibrosis and also to quantify it but these cannot differentiate between different causes of interstitial fibrosis. With the use of intravenous gadolinium delayed images are obtained using inversion recovery sequence with myocardium nulling where the scar tissue appears as hyper-intense due to increased uptake of contrast by the scar tissue. By modifying this technique by the use of automated scar analysis algorithm with low grey scale threshold of 2 SD or less one can differentiate between the relative signal of the nulled myocardium, increased trapping of contrast in the interstitial scar and the hyper-intense replacement scar which gives a swiss cheese appearance.

To our knowledge this sign has not been previous described and is characteristic for HCM. The use of CMR using scar weighting algorithm as described alongwith T1 mapping with ECV estimation not only gives diagnostic appearance of the condition but also by quantifying the fibrosis gives a prognostic significance of these patients due to prevalence of prolific mixed scarring in the myocardiumwhich carries increased risk for arrythymia and sudden death. Therefore by early detection and quantification of fibrosis patients can be stratified as high risk to be considered for device implants.