Rheumatic mitral stenosis (MS) is associated with progressive impairment of left atrial (LA) mechanical functions. This study was conducted to assess the acute impact of Balloon Mitral Valvotomy (BMV) on these functions.

Atrial function, in a close interdependence with left ventricular (LV) function, plays a pivotal role in maintaining optimal cardiac output. The left atrium (LA) modulates LV filling through its reservoir, conduit, and booster pump function.1 LA acts as a reservoir, receiving pulmonary venous return during LV systole; as a conduit, passively transferring blood to the LV during early diastole and diastasis; and as a pump, actively priming the LV in late diastole. Rheumatic mitral stenosis is associated with LA structural remodeling and increased LA afterload, which lead to significant impairment of left atrial mechanical functions.2,3 Balloon Mitral Valvotomy (BMV) is presently the preferred treatment for patients with severe mitral stenosis and suitable valve morphology. The hemodynamic and clinical benefits of BMV have been firmly established by many short term and long term studies.4-7 However, there are very few studies reported in literature which have assessed the impact of BMV on left atrial mechanical functions.8,9The present study was conducted to evaluate the acute impact of successful BMV on phasic left atrial volumes and left atrial mechanical functions in patients with severe mitral stenosis and normal sinus rhythm.

After explaining the study in detail, an informed consent was taken from each patient. The study protocol was cleared by the Institutional Ethics Committee.

Baseline evaluation including clinical history, physical examination, complete blood count, serum biochemistry, coagulation profile, serum electrolytes, electrocardiogram (ECG), chest X-ray was performed before the procedure. A comprehensive echocardiographic examination (as mentioned in detail below) was done before, immediately after, and 24-48 hours after the procedure. BMV was performed using a standard trans-septal approach with an Inoue balloon.

Pre-procedural echocardiographic examination of each patient was carried out on the morning of the day of procedure, using a commercially available echocardiography machine equipped with 2.5 and 3.5 MHz transducers (Aloka, Prosound, SSD α-110, South Korea), by an experienced cardiologist who was blinded to the clinical details of the patient. Examination was performed in the left lateral position, and included precordial two dimensional, M-mode and Doppler imaging according to the American Society of Echocardiography guidelines.17,18 During the examination, one-lead ECG was recorded continuously. For the measurement of each parameter, an average of three consecutive cycles was analyzed. Left ventricular end-systolic and end-diastolic diameters (LVIDS and LVIDD), left atrial (LA) end-systolic diameter were measured by M-mode imaging in the parasternal long axis view. LV end-systolic volume (LVESV), LV end-diastolic volume (LVEDV) and ejection fraction (LVEF) were estimated by Simpson’s rule in the apical 4-chamber view. The severity of mitral stenosis was quantified by estimation of mitral valve area by 2D planimetry (MVA-2D) in parasternal short axis view and by the pressure half time method (MVA-PHT) in the apical 4-chamber view using continuous wave (CW) Doppler.11,12 Peak and mean transmitral diastolic pressure gradients (PDG and MDG) were measured by continuous wave Doppler in the apical four chamber view. Mitral valve morphology and the sub-valvular apparatus were assessed by 2D imaging, and Wilkins’s score was calculated.13,14 Pulmonary artery systolic pressure (PASP) was calculated by adding the estimated right atrial pressure to {(tricuspid regurgitation velocity)2 × 4},measured by continuous wave Doppler in the apical four chamber view.19 Color flow Doppler imaging was used to detect and quantify the severity of mitral regurgitation.20

The left atrial phasic volumes were calculated by the modified Simpson’s method from the apical four chamber view at the onset of P-wave on the ECG [pre-atrial contraction volume, Vp (Figure 1)], just before the mitral valve opening [maximal volume, Vmax (Figure 2)] and at the mitral valve closure [minimal volume, Vmin (Figure 3)].21-23 These values were corrected for the body surface area (BSA). For the assessment of LA mechanical functions, the following indices calculated from the volumes were used.24-27

The study population consisted of 25 patients who met all the inclusion criteria.

The present study showed that in patients with severe MS and normal sinus rhythm, successful BMV led to immediate reduction in phasic LA volumes (Vmax, Vmin, and Vp). There was significant improvement in indices of LA reservoir function (LATEF and LAEI), while there was a trend towards improvement in LA conduit function (LAPEF). LA pump function (measured by LAAEF) did not improve significantly in the acute phase.

The pathophysiology of LA mechanical dysfunction in rheumatic MS is multifaceted. The combination of mitral valve disease and atrial inflammation, secondary to rheumatic carditis leads to left atrial (LA) dilation, myocyte necrosis, interstitial fibrosis and disorganization of atrial muscle bundles.30 Consequent to these changes (structural remodeling), the atrial myocytes lose their normal contraction and relaxation functions.31 Hemodynamically, narrowing of mitral orifice poses increased resistance to LA emptying i.e. increased LA afterload. The combination of these structural and hemodynamic changes leads to progressive impairment of LA mechanical functions, which has an adverse impact on the long term prognosis of these patients.32 Triposkiadis et al. demonstrated that LA volumes in MS patients were significantly larger, while LA emptying fractions (both active and passive) were substantially reduced compared to normal patients.2 Kono et al. suggested that intrinsic LA dysfunction is present even in early stages of mitral stenosis, when LA pressure is only slightly elevated.33 Inaba et al. revealed that follow-up study is needed to determine whether LA dysfunction is a predictor for the development of cardiovascular events (e.g. stroke, thromboembolism, atrial arrhythmias).32 We found that phasic LA volumes showed a significant correlation with age; severity of mitral stenosis; trans-mitral gradients; pulmonary artery pressure; LV dimensions, volumes and ejection fraction. This suggests that LA remodeling in mitral stenosis progresses with increasing age, progression of disease and worsening hemodynamics.

The impact of BMV on LA mechanical functions in MS patients has not been extensively studied so far. Few studies that have been conducted in this regard have demonstrated conflicting results. Stefanadis et al. found that successful percutaneous balloon mitral valvuloplasty led to significant increase in LA pump function in patients with sinus rhythm, a significant increase in LA reservoir function in patients with atrial fibrillation and a significant reduction in LA stiffness in all patients.34 Bitigen et al demonstrated that phasic LA volumes and total emptying volume decrease while conduit volume increases after BMV.8 Vieira et al showed a significant reduction in LA volumes and LAEF 72 hours and 1 year after the procedure.9 It must be stressed that the parameters used to assess the left atrial functions were different in each of these studies with no established standards used to define various components of LA function. After thorough research of the available literature we carefully selected only those parameters which are well substantiated by quality evidence as reliable measures of LA function in many diseases other than rheumatic mitral stenosis.21-28 We observed significant decrements in Vmax, Vmin and Vp in the immediate post-BMV period. Also, LAEF and LAEI increased significantly after the procedure. Although LAPEF increased after BMV, this change did not achieve statistical significance (p= 0.057). There was no significant improvement in LAAEF early after BMV. Our findings suggest an early improvement in LA reservoir and conduit functions but no significant improvement in pump function after successful BMV. The mechanisms of modulation of LA functions following BMV have not been well elucidated. The major acute hemodynamic impact of BMV on the LA is a decrease in the mitral valve afterload, as reflected by an increase in the mitral valve area, a decrease in the peak and mean trans-mitral diastolic pressure gradients and a decrease in pulmonary artery systolic pressure. These changes are followed by decrease in LA volumes and increase in LAEF, which might reflect a tight relationship among pressure, volume and function.9 The rapid recovery of LA reservoir and conduit functions following BMV suggests that these functions are predominantly dependent on LA volumes and afterload. The failure of immediate improvement in LA pump function after BMV could be attributed to the lack of acute changes in LA structure, including fibrosis of atrial wall, disorganization of atrial muscle bundles and intrinsic contractile dysfunction of atrial myocytes.35 The prospects of long term reverse LA structural remodeling following BMV and possible further improvement in these functions remains unanswered as of now. Long term prospective studies are required to evaluate whether these changes translate into clinical benefits like reduced incidence of atrial fibrillation and risk of systemic thromboembolism.

Acute Impact of BMV on LA Volumes and Functions

Measurement of LA volume at the onset of p-wave (Vp) by modified Simpson’s method in apical 4-chamber view. 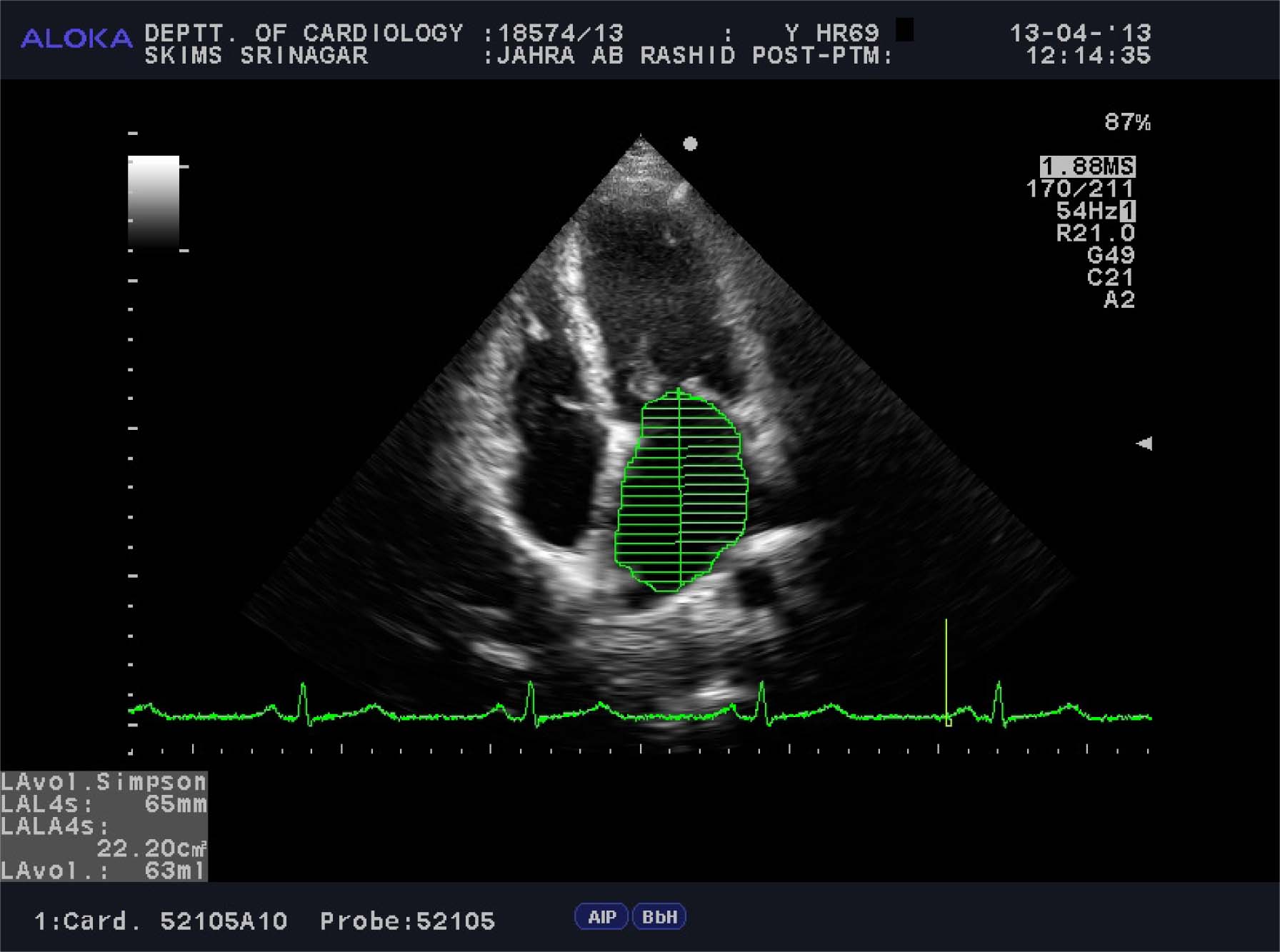 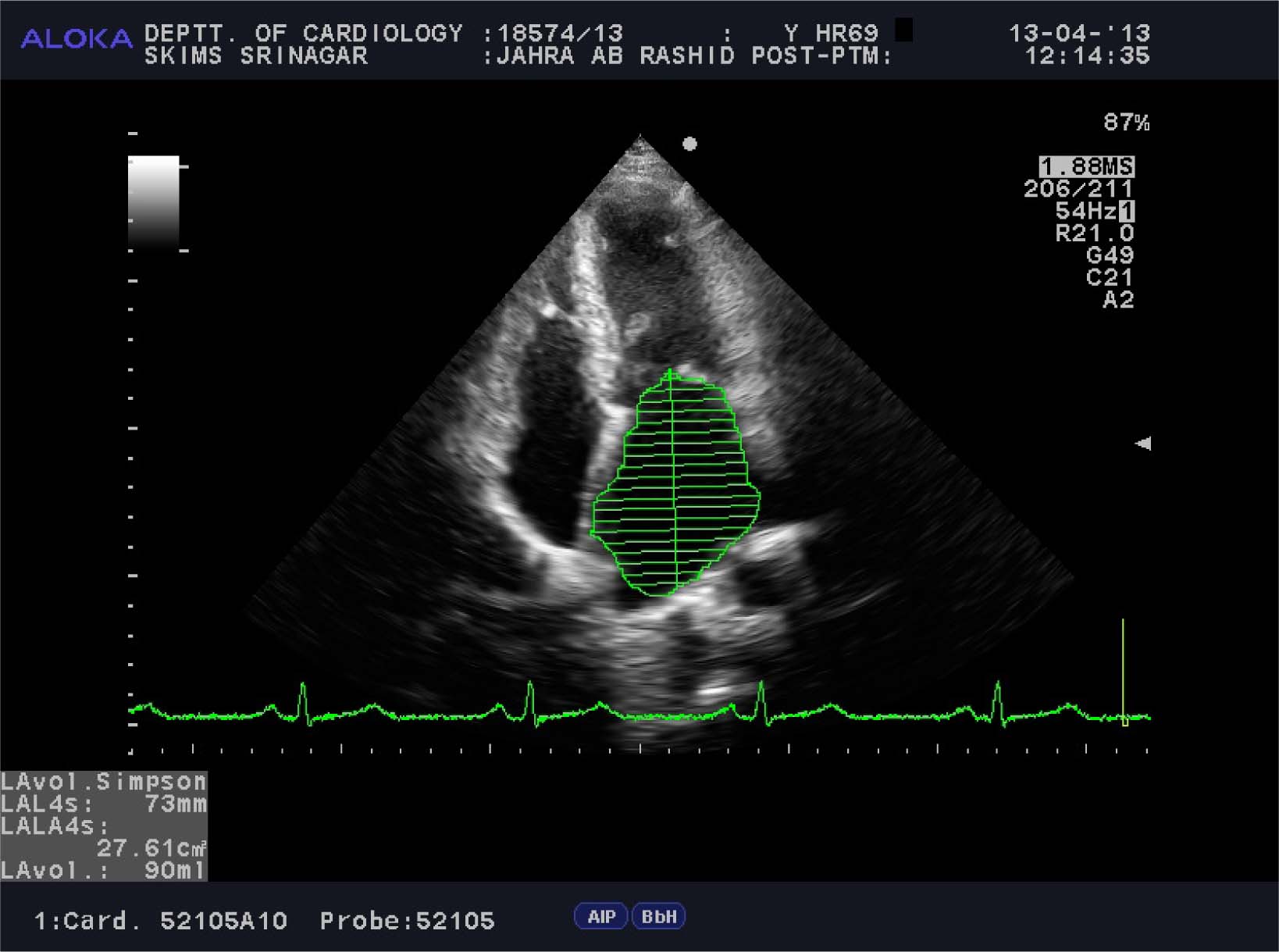 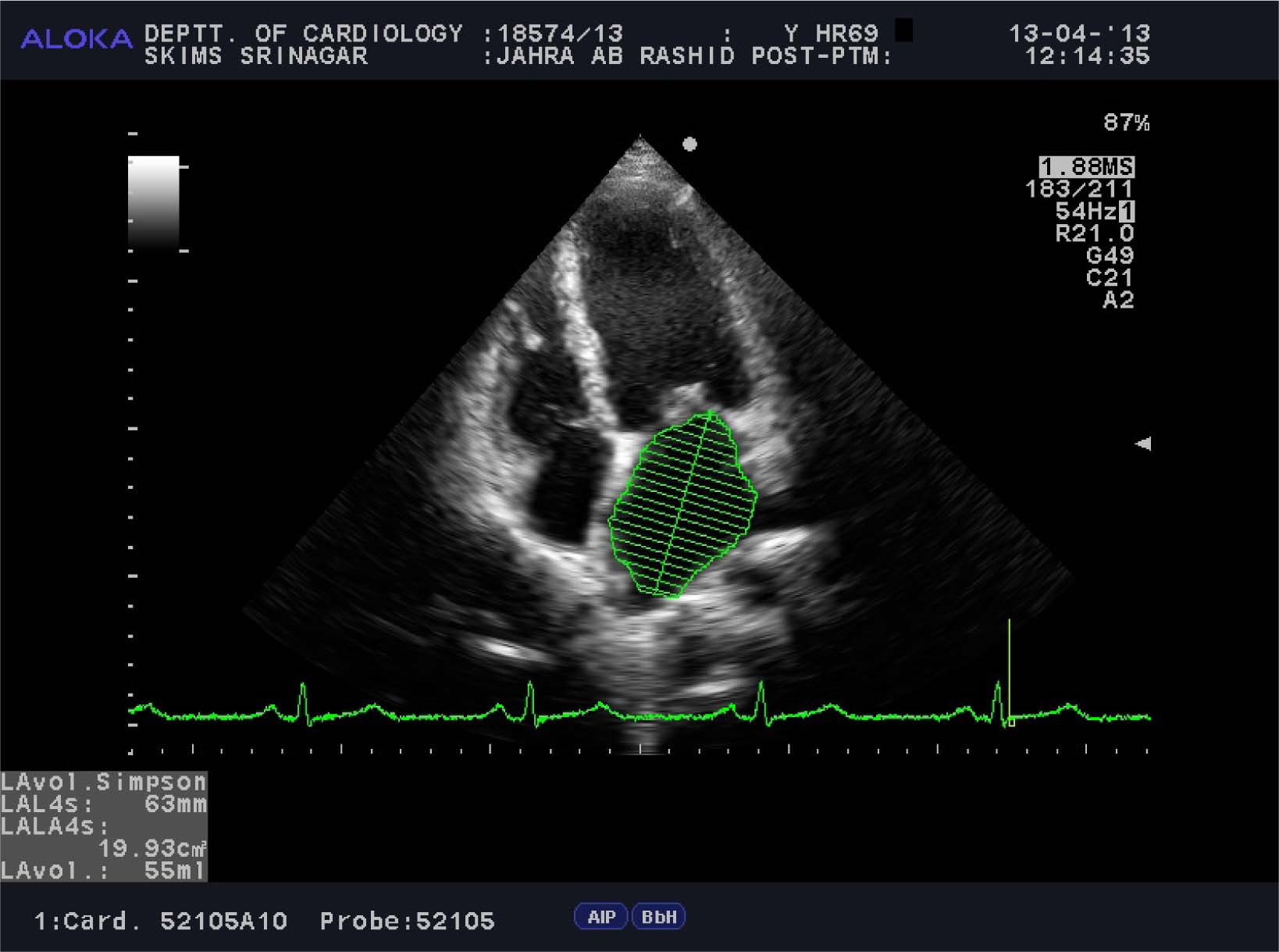 The main limitations of our study were as follows:

This study was carried out at a single centre and the study sample was relatively small. The limited sample size was mainly due to the strict inclusion criteria adopted for this study to avoid the confounding effect of other variables on the results of this study.

We only studied the immediate impact of successful BMV on LA mechanical functions. Long term effects and clinical implications thereof were not evaluated in this study.

Manual tracking of LA wall for measuring LA volumes is prone to inter and intra-observer variability. These may reduce the reproducibility of these measurements.

We owe our sincere thanks to Mr. Farooq Ahmad and Ms. Shiney (Senior Cardiac Technologists) for their immense support in conducting this study.

[4] Conflicts of interest SOURCE OF SUPPORT

[5] Conflicts of interest CONFLICT OF INTEREST The authors declare no conflict of interest.