Ayurveda suggests to collect the information about medicinal plants from the Vanavaasi (primitive tribes), Ajapa, Avipa (Shepherds) and Gopa (Cowheards). Traditionally the science of healing is taught from one generation to another, which others will not be aware of. Western Ghats are Rich in Flora and Fauna thus considered as one of the Hotspots of Bio-diversity in India.

Hence an attempt is made in that direction to collect the information from traditional healers of a place which is amidst of Western Ghats named Thirthahalli taluk regarding the plant species, their local name, part used along with dosage of the medicinal plants used by them in treating various illness. The data was collected by randomly selecting 13 informers who were from 6 different villages and data is collected using a Self-prepared questionnaire based interviews.

The ethnobotanical survey is documented and it reveals that 20 plant species are used by the folklore practitioners to treat various ailments.

Thus it is evident that the knowledge of the folklore practitioners is in depth, undoubted and very much scientific. 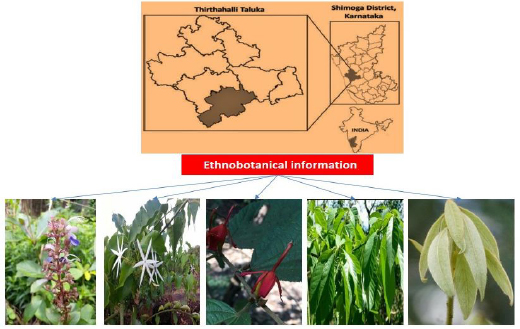 Ayurveda is the oldest yet scientific medicine, considers every substance is medicinal in nature[1] and it also suggests to collect the information about the medicinal plants from ajapa (Shepherds), gopa (Cowherds) and other people who live in forest[2]. Plants are the basis of life on earth and are central to people’s livelihood. Tribal people are the ecosystem people who live in harmony with the nature and maintain a close link between man and the environment. Each and every tribal/ethnic community has its own system of traditional medicine and they utilize natural plant based resources around their habitat for their daily use, as a custom and also for various medicinal purposes. This knowledge is handed down orally from one generation to the other[3]. Indian subcontinent is being inhabited by over 53.8 million tribal people in 5000 forest dominated villages of tribal community and comprising 15% of the total geographical area of Indian landmasses, representing one of the greatest emporia of ethno-botanical wealth[4].The majority of people live in rural areas in India and they rely upon traditional medicines for their healthcare as well their cattle, this is due to strong belief on the traditional medicine and the healers. Lack of primary healthcare centres and transportation facilities also makes them to approach traditional healers. Besides, medicinal plants are easily available natural products, cost-effective with no or negligible side-effects[5]. The ethno-medico-botanical surveys are always been considered as a tool in search for new sources of drugs and neutraceuticals[6]. The majority of the traditional healers are above the age of 70 years, hence there is an urgent need to record and to preserve all the information on the plant species used by them. There are no much previous reports on the documentation of knowledge about utilization of medicinal plants from selected locality. Hence an attempt is made to collect and document the knowledge from the knowledgeable traditional healers. In this paper we report on the information gathered from the Folklore practitioners of Thirthahalli taluk on the plants used for the treatment of various diseases.

The study area selected was Thirthahalli taluk belonging to Shivamogga district, Karnataka and it is located amidst the Western Ghats region which is considered as the ‘hotspots of bio-diversity’ in India (Figure 1). This taluk is situated between 13033I and 13046I latitude and between 750 09I and 750 28I longitude in about the mid-south western part of Karnataka state at an altitude of 696m above the mean sea level. The study area has diverse types of vegetation like evergreen, semi-evergreen, moist and deciduous forests and is very rich in diversity of plants with medicinal values. The taluk covers a total area of 196 km2 and the average rainfall ranges from 2207-2658 mm, this is because it includes Agumbe which is recorded as second highest annual rainfall after Cherrapunji of Meghalaya state. Agriculture is the major occupation in this area and arecanut, banana, paddy, pepper are the main crops. Tunga River originates in the study area. Six villages were randomly selected for the survey purpose namely Guddekeri, Kundadri, Kowrihaklu, Agasarakone, Dhonihaklu and Nadabaru. The survey is done during November 2016 to January 2017. Ethno-medico-botanical information on the medicinal plant species were collected from the knowledgeable traditional healers as well as elder people of the study area through a detailed self-made questionnaire[7]. Out of 13, 11 were male and 2 female respondents under the age group ranging from 43 to 96 years. The information about medicinal plants like its local name, part used, dosage form and dosage, mode of administration were collected and the collected information is confirmed by cross-checking with other respondents, with former patients and compared with already existing literature[8,9]. The ethno-medicinal plants photographs were taken and few plant material were collected and all the plants were identified taxonomically using a local flora[10,11].

The ethno-medico-botanical survey performed in few selected villages of Thirthahalli taluk of Shivamogga district were documented and the information gathered by the traditional healers and knowledgeable elders were arranged alphabetically by ailment followed by Botanical name, local name, Family and part used along with mode of usage. Apart from the medicinal use, information regarding the field identification characteristic feature of the plant species were also obtained.

The study revealed total of 21 Genera of medicinal plants including 15 Families and few medicinal plants which were not mentioned in Ayurveda and we considered them as anukta dravya (Extra Pharmacopoeial drugs) and 4 such plants were observed in the study, which were endemic to the study area like Flueggea leucopyrus, Persea macrantha, Actinodaphne wightiana, Sauropus androgynus as Western Ghats is known for its rich bio-diversity especially when it comes to the availability of the medicinal plants.

The folklore practitioners were also specialized based on the diseases which they treat like few were Joint diseases as well as Fracture specialists and Few were experts in treating snake bites. The plant based medicines are used to treat various ailments such as Asthma, Fracture, Haemorrhoids, Herpes, Jaundice, Snake bite.

The knowledge which is passed on from generation to generation as a tradition is being practiced by them and that information is provided. This is consistent with the general observations made earlier in relation to ethnobotanical studies on some of the other areas of Thirthahalli by Savinaya MS[12] and Nagabhushan K[13].

The difference between Ayurveda as well as the Folklore practices are insignificant except the fact that Ayurveda is documented and folklore practices are spread through tradition from the ancestors. Hence Documentation of knowledge about 20 medicinally important species were done in the study, few were mentioned in Ayurveda and few were not. The profusely available natural resources can be used for the various human as well as veterinary ailments. Thus it is evident that the knowledge of the folklore practitioners is in depth, undoubted and very much scientific. Thus it is need of the hour to document such traditional medicinal practices which is of use to present as well as future generations.

Map of the study area 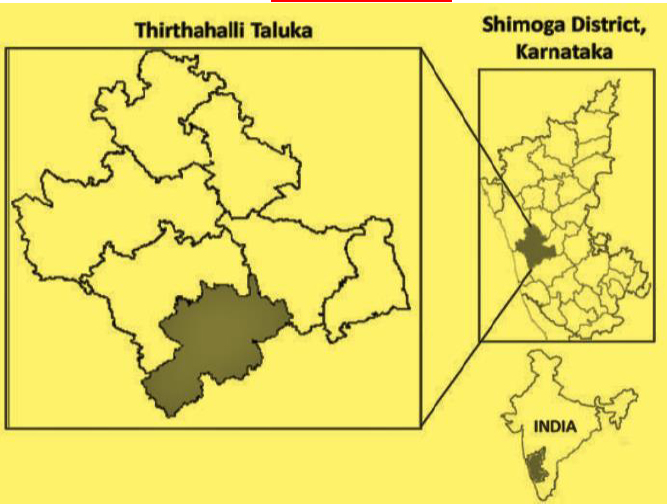 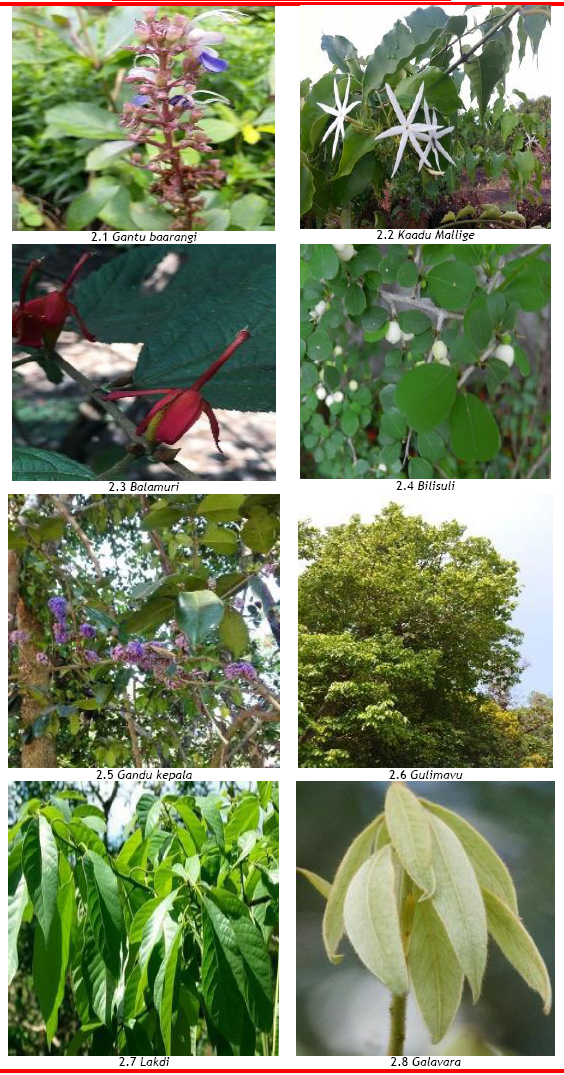