The anticancer drug related ADRs received in AMC through spontaneous reporting and active surveillance methods from January 2014 to June 2016 were analyzed for demographic profile, organ system and department wise distribution of ADRs, common ADRs encountered, drugs responsible for causing ADRs, ADRs reported by healthcare professionals, number of ADR/ ADRs developed per patient and causality assessment of reported ADRs. Descriptive statistics were used for analysis and the values were expressed in numbers and percentages.

The average ADR encountered per patient due to anticancer drug was about 1.18 in this study. Anemia, neuropathy and neutropenia were the most common ADRs reported.

Cancer is one of the leading causes of death in both developed and developing countries.1 According to International Agency for Research on Cancer, GLOBOCAN 2012, an estimated 14.1 million new cancer cases and 8.2 million cancer-related deaths occurred in 2012 and new cancer cases may increase to 19.3 million per year by 2025.2 Chemotherapy, radiotherapy, surgery, hormonal therapy, immunotherapy, biologic therapy and cryosurgery are the different treatment modalities available for cancer. Chemotherapy, immunotherapy and hormonal therapy are the treatment options in the early stages of cancer.3 As anticancer drugs have narrow therapeutic index, adverse drug reactions (ADRs) to these medications are high compared to other classes of drugs. According to WHO, adverse drug reaction (ADR) is defined as “any response to a drug which is noxious and unintended and which occurs at doses normally used in man for prophylaxis, diagnosis, or therapy of disease, or for the modification of physiological function.”4 According to an epidemiological research performed in Australia, antineoplastic and immunosuppressive drugs are associated with 11% of adverse drug reactions (ADRs) in Australian hospitals with antineoplastic drugs being the most common agents responsible for medication-related hospitalizations.5 Similarly a study conducted in South Indian hospital has reported antineoplastic agents as the common class of drugs causing ADRs accounting for a total of 21.8% of the reported ADRs.6 A recent study on global patterns of ADRs over a decade has documented that high-income countries have more ADRs from antineoplastic and immune-modulating agents.7

In addition to increasing the length of hospital stay, ADRs also significantly increase the health cost. The estimated total cost of treatment for ADRs is 1.7% of the total hospital budget with a median cost of 8517 francs.8 Most of the ADRs with these drugs are unreported due to unawareness of healthcare professionals, lack of time to report and a dearth of sufficient staff in the hospitals. Hence it is necessary to recognize the pattern of ADRs occurring with anticancer drugs so as to enhance the quality of life and to reduce the cost of ADR related hospitalization among cancer patients. Thus the present study is aimed to determine the pattern of adverse drug reactions occurring with anticancer drug in a tertiary care hospital.

Adverse drug reactions reported to the ADR monitoring Centre (AMC) functioning in a tertiary care South Indian hospital from January 2014 to June 2016 were collected. Among the ADRs reported to AMC during this period, ADRs related to anticancer drugs were segregated and analyzed. ADR due to anticancer drugs reported to AMC by both spontaneous reporting and active surveillance methods were included. Though spontaneous reporting by healthcare professionals is the common method of reporting, active surveillance plays a significant role in detecting newer and rare ADRs within a short period.9 Hence, ADRs reported by both the methods were included for analysis. Suspected adverse drug reaction reporting form was used by AMC for reporting of ADRs as a part of the Pharmacovigilance program of India (PvPI). The ADRs were classified as certain, probable, possible, unlikely, unclassified or unclassifiable using WHO-UMC causality assessment scale.4 Causality assessment was done by a team of Clinical Pharmacologists and Pharmacovigilance Associate (PA) working under Pharmacovigilance Programmer of India (PvPI). As and when required the opinion of the consultants of concerned departments were taken into consideration for the causality assessment. All the data were presented in percentage. 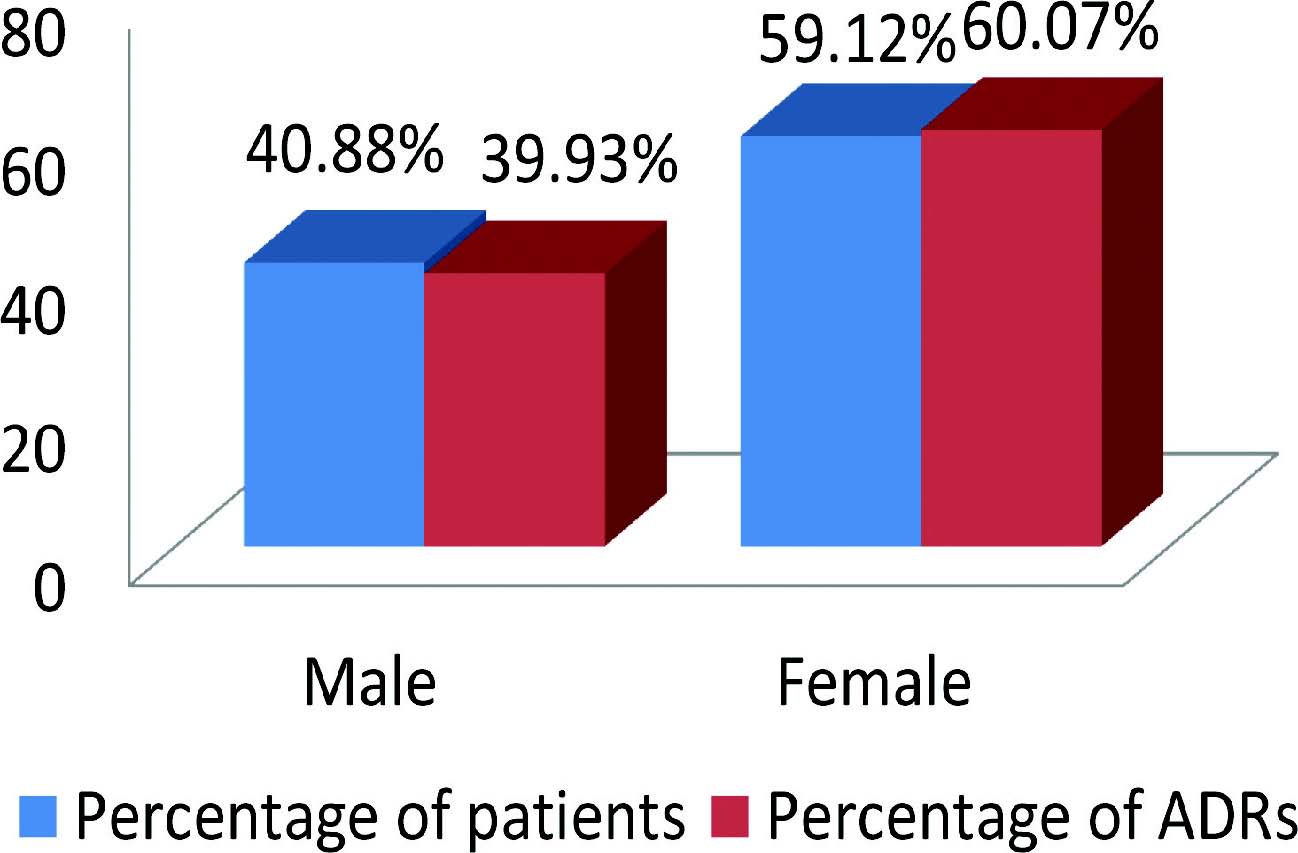 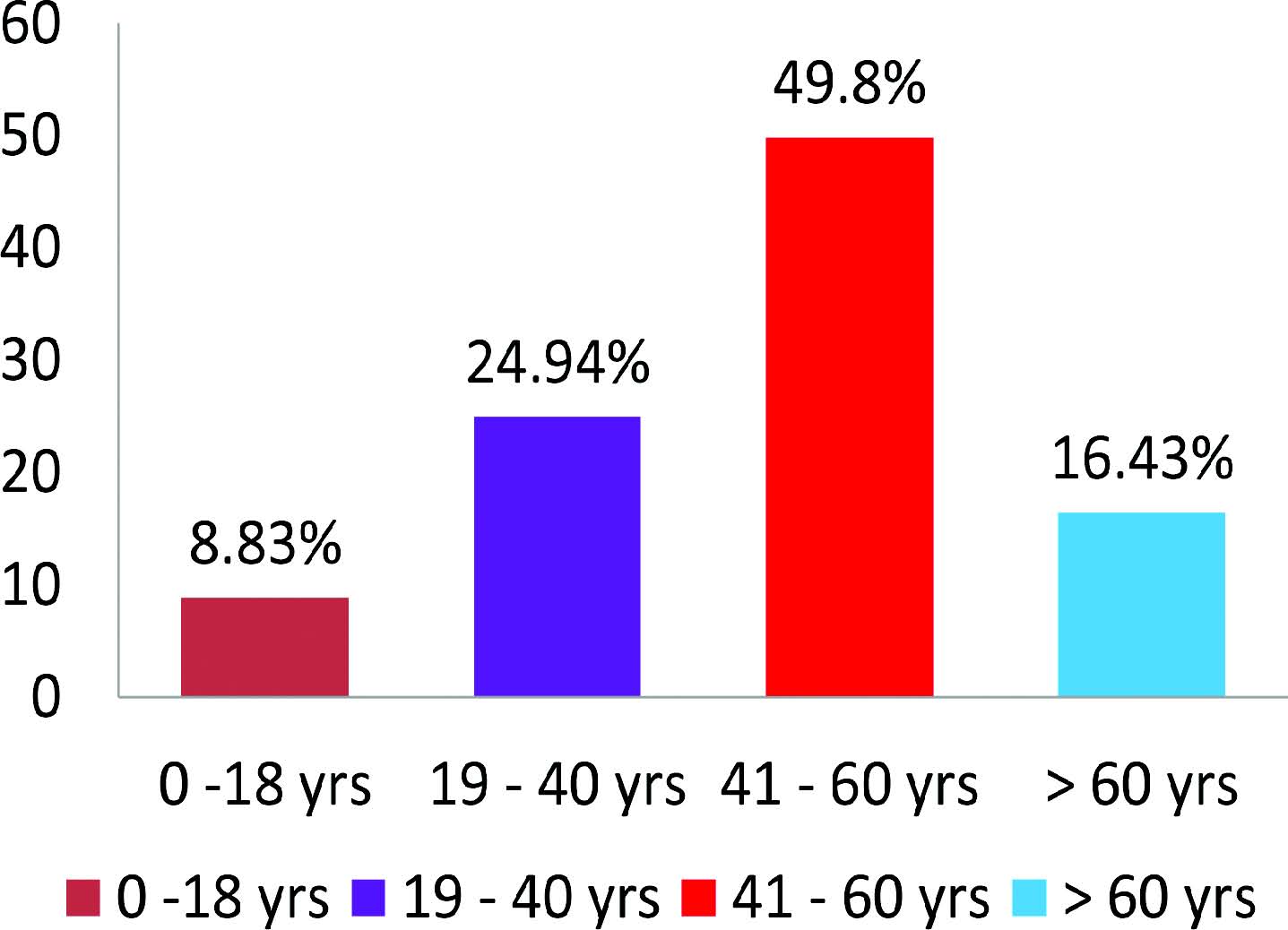 Number of ADR/ADRs per patient

The ADRs reported with anticancer drugs for a period of 2.5 years were collected, analyzed and reported from different departments of a multi-specialty hospital and research institute in South India. In the present study, ADRs due to anticancer drugs were observed more in females than in male patients. This may be attributed to the smaller body surface area in females. Our finding is similar to the study conducted by Sharma et al.10 that showed ADRs in the age group 41-60 years were highest followed by 19-40 years and lowest in the age group 0-18 years. This finding is similar to the report of Pai et al.11 who also reported mean age of patients 55.98 years and 52.96 years in male and female respectively. This could be due to the higher incidence of cancers in this age group or under reporting of ADRs in the paediatric age group. 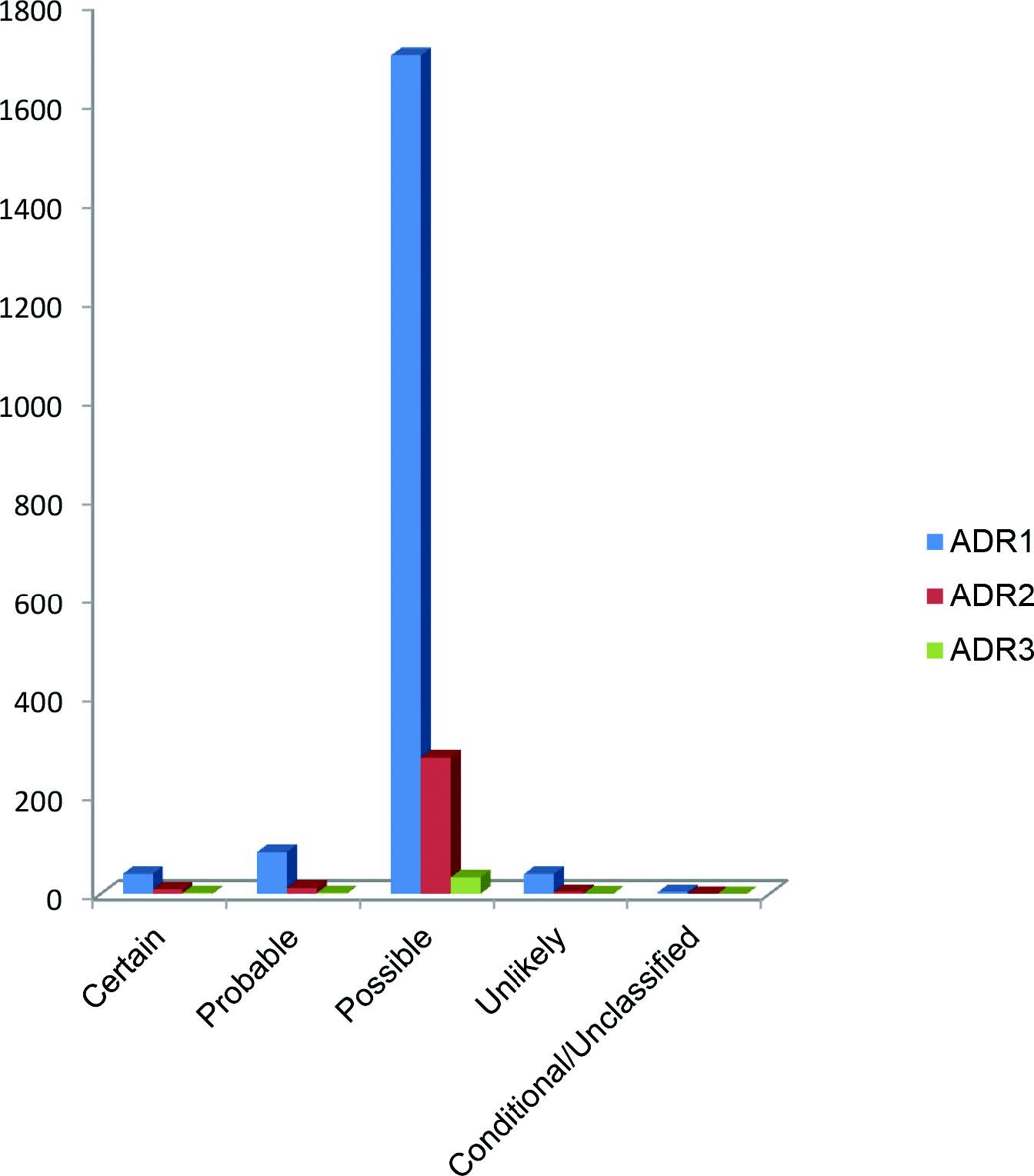 11 most common ADRs due to anti-cancer drugs

The most common anticancer drug causing ADR was imatinib followed by docetaxel. This is in contrast to the studies showing platinum and 5-Fluorouracil as the most common anticancer drugs associated with ADRs.12 This could be probably due to the availability of imatinib free of cost to the patients or due to the prevalence of cancer for which imatinib is a treatment option in our center. 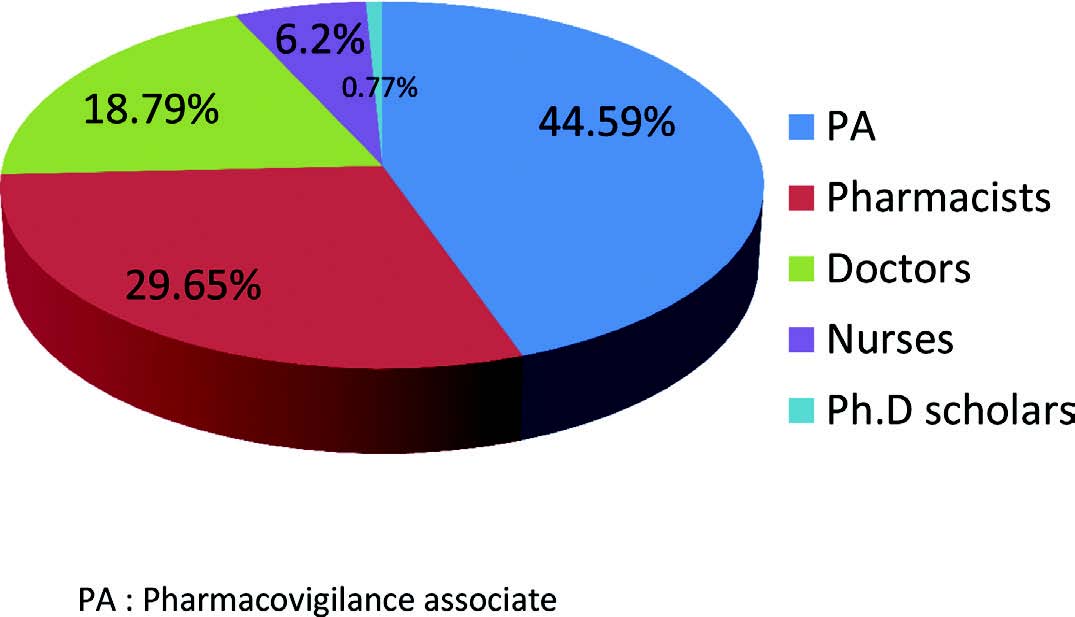 Most of the ADRs were reported by the technical associate followed by pharmacists and doctors. This is in contrast to the results of Kalaiselvan et al. that found doctors report majority of ADRs followed by pharmacists.15 The dissimilarity of our finding could be attributed to lack of time for reporting ADRs owing to high patient load in our setting and active involvement of our Pharmacovigilance associate who is working in department of Clinical Pharmacology on a regular basis under PvPI.

The major limitation of the study was inability to trace the patients and the reporting personnel for additional information owing to retrospective study design.

Cancer chemotherapeutic agents have a high propensity to cause ADRs owing to their action on rapidly dividing cells. Hence early detection of these ADRs may help in minimizing the harm either by modifying the dose or changing the concerned drug with a suitable alternative. This knowledge may help in preventing the occurrence of similar reactions in future. Accordingly, an efficient adverse drug reaction monitoring centre (AMC) and reporting system is mandatory in all hospitals to generate awareness among health care professionals. Measures to promote judicious use of drugs and reduce the incidence of adverse drug reactions (ADRs) will help in promoting quality of life apart from lessening economic burden of the patients.

Authors are thankful to all heads of the departments, physicians and staff from where ADRs are collected for their support in reporting adverse drug reactions.

WHO-UMC.org. The use of the WHO-UMC system for standardised case causality assessment. [Internet] [Cited 2016 Oct 15]. Available from:. http://whoumc.org/Graphics/24734.pdf

Journal:
Journal of Young Pharmacists
‹ The Extent and Factors Associated with Non-Prescription Medicine Use in Eastern India – A Cross-Sectional Survey up An Intensive Monitoring of Adverse Drug Reactions among Elderly Patients Hospitalized in Medical Wards of a Tertiary Care Hospital ›