A systematic random sampling technique was employed to select the public health facilities from each of the corresponding study areas. Quantitative data were collected using both retrospective and prospective structured observational checklist and structured questionnaire. Data were analyzed using EPI INFO Version 3.5.1 and SPSS version 16.0.

A total of 384 HIV/AIDS patients (47.9% males and 52.1% females) were included in the study from three hospitals and seven health centers with mean age of 32.8 years (SD ± 11.9 years). Ninety percent of the health facilities dispensed the ARV drugs to patients when they came for resupply within 1-3 months. Only thirty percent of the health facilities had received all the ordered quantities of ARV drugs. Zidovudine/Lamivudine/Nevirapine, Tenofovir/Lamivudine/Efavirenz and Zidovudine/Lamivudine/Efavirenz combinations were the most commonly prescribed ARV regimens with 31.9%, 19.8% and 15.1%, respectively. Patients who used substances such as khat, cigarette and alcohol along with the ARV drugs were 4.6 times more likely to miss their proper daily dose usage as compared to those who did not use (AOR = 4.619 [95% CI: 2.069-10.313]).

The patients should adhere to the right dose at the right time but the health facilities sometimes received not all the quantities of ARV drugs that they have ordered. Zidovudine containing ARV regimen was the most commonly prescribed regimen.

The increasing demand of global AIDS treatment poses unprecedented challenges for SCM, since each point of dispensing ARV drugs (i.e., clinic, hospital, and community outreach worker) must have access to a customized and predictable supply of ARVs and other drugs at all times.1 However, a major challenge is maintaining continuous supplies of ARV drugs and preventing stock outs.2,3 Ensuring an uninterrupted supply of ARV drugs is critical to minimize the emergence of HIV drug resistance, protect the health and well-being of patients, and ultimately reach universal access goals.4

The launching of the free ARV treatment initiative in Ethiopia was characterized with a large infusion of commodities which require high logistics capacity. The success of this expanded HIV/AIDS program is dependent on ability to reliably and consistently supply of the essential commodities.5

HIV treatment requires an effective supply chain to ensure that ARV drugs are available at all times so as not to cause treatment interruptions. Therefore, ARV SCM must take the following issues into consideration: special distribution requirements for ARVs and diagnostics, constant stock availability, and ARVs are high-value, high-demand products which require extra security.6

Uninterrupted supply of quality, safe, effective and comprehensive ARVs for treatment of HIV/AIDS is a pre-requisite and a challenge for ART programs. ARV drugs must travel to treatment sites via a secure and reliable supply chain to ensure the quality, safety and efficacy of formulations.7

Socio-demographic characteristics of the respondents

Storage condition of ARV drugs were arranged on shelves with 70% clear visibility of the identification of product label, expiry dates and manufacturing dates. Only 70% of ARV products were stored at the appropriate temperature (8-30°C) including cold chain storage (2-8 °C). On the other hand, only 50% of the facilities currently had sufficient storage space for existing ARV products & planned program expansion. Table 2 shows storage condition of ARV drugs in the health facilities.

Storage condition of ARV drugs in the health facilities, 2014

According to the data obtained in this study, 81.0% and 12.0% of people living with HIV were on the standard first-line regimen for adults and pediatrics, respectively while 7.0% uses second line pediatrics ARV regimens (Figure 1). Forty one percent of the total patients who were receiving ARV drugs had forced at least one case of treatment course change due to different reasons (Figure 2). From drugs that were used for prevention of occurrence of opportunistic infection, 131 (34.1%) of the patients used cotrimoxazole followed by 15 (3.9%) amoxicillin (Figure 3).

Initiation criteria and reports about ARV drugs effects on the patients

Ninety percent of the health facilities were using laboratory facilities that were used to detect the status of the HIV patients in order to initiate ARV drugs mainly dependent on the CD4+ count and clinical stages. Seventy percent of the health institutions were monitored side effect of ARV drugs but only 20% of them report to the higher level about the side effect observed. On the other hand, 100% of the health facilities reported the number of patients on ARV to higher level. With regard of the ARV resistance, 60% of the health facilities monitor but 40% of them were reported the cases to higher level. As only the most common Adverse Drug Reactions (ADRs) are detected during pre-marketing trials, it is, therefore, important to devise methods for quick detecting ADRs. This could be carried out by post-marketing surveillance, i.e., ADRs monitoring. Hence, all health professionals have the responsibility to report any unique ADR observed to Food, Medicine and Healthcare Administration Control Authority (FMHACA) of Ethiopia.

Patients’ use of ARV drugs

Determinants, which were found to be significant by binary regression were introduced to multiple logistic regression. From all covariates studied, illiterate patients were 3.8 times more likely to miss their daily dose than patients who were above secondary (Adjusted Odds Ratio [AOR] = 3.804 [95% CI: 1.300-11.133]). Patients who took one drug (fixed combination ART) were 5.32 times more likely to missed their regular dose than patients who took more than one drug per day on average (AOR=5.327 (1.990-14.257)).

The odds of missed dose were 3.95 times more likely among patients who have no knowledge about proper dose & frequency of the ARV drugs usage (AOR= 3.951[95% CI: 1.475-10.584]) compared to those who have the knowledge. On the other hand, sex, age, marital Status, employment condition and disclosure of patients who receive ARV drugs was not found to affect the utilization of proper daily dose of the patients significantly (Table 4). Majority of the respondents 273 (71.1%) disclosed their HIV results to at least one person and 111 (28.9%) were not disclosed themselves from which majority of them were females.

ARV regimens prescribed in terms of first and second line 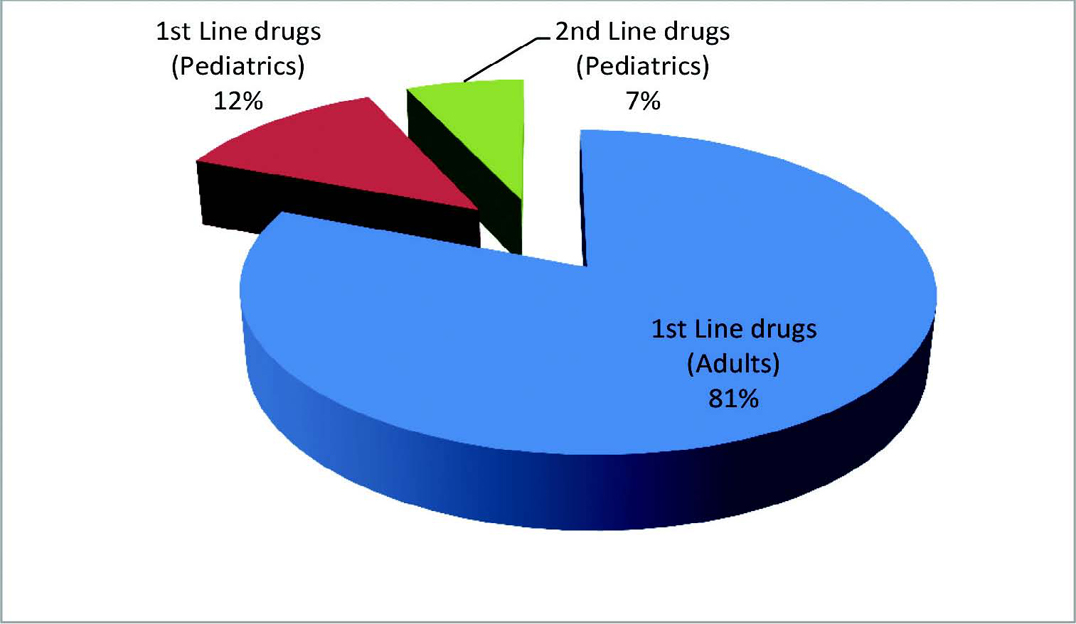 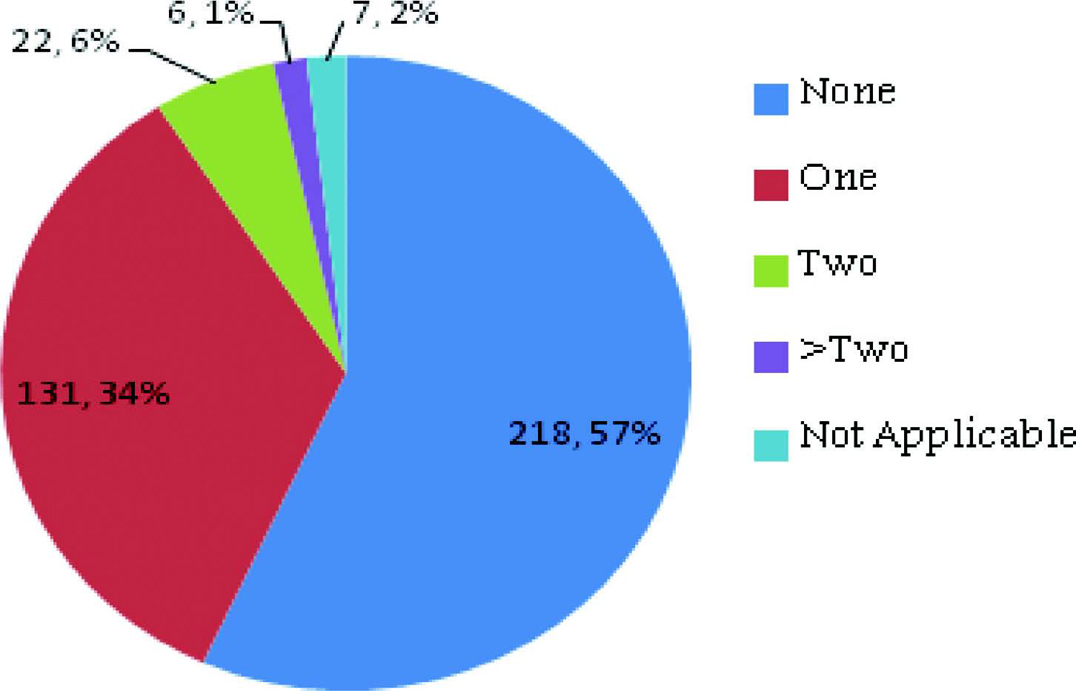 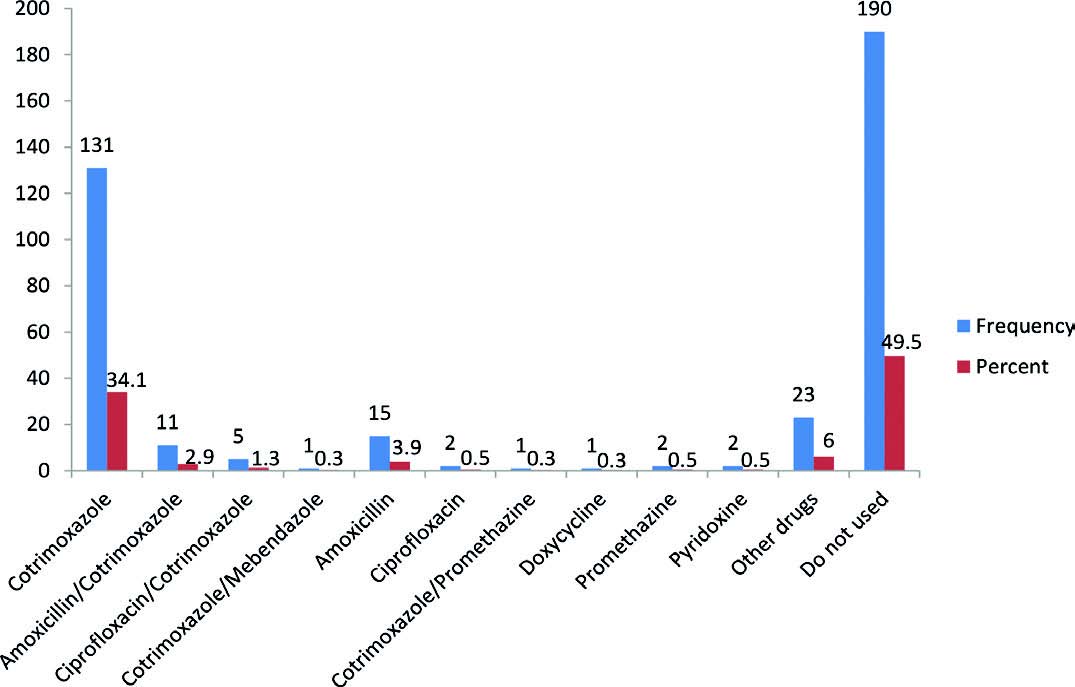 In Ethiopia, the number of health facilities providing ART services, mainly public facilities, has expanded, enabling the enrolment of hundreds of thousands of PLWHA from time to time as the drugs are provided free of charge.8

Revised WHO guidelines advise changing the eligibility criteria to start ART regimen options for all patients, regardless of pre-ART viral load or CD4 cell count and propose a move away from several Nucleoside Reverse Transcriptase Inhibitors (NRTIs).18 However, most of the health facilities were still using those regimens including zidovudine and didanosine as part of an initial ART regimen. In December 2013, Ethiopia adopted the new WHO integrated guidelines for treatment, in which adults with CD4 below 500, all pregnant women and all TB patients independent of CD4 count are eligible for treatment.19

Nearly 41.0% of the total patients was forced at least one treatment course change due to drug associated side effects such as rash, gastrointestinal upset, amnesia, etc. Thus, PLWHA were found to use additional drugs to prevent the occurrence of opportunistic infections and 149 (38.8%) of ART patients were on Cotrimoxazole Preventive Therapy which was much lower as compared to Malawi (94.0%).20

ART adherence levels of ≥ 95% minimize HIV drug resistance and optimize measures of patient outcomes.21 Previous studies in Ethiopia were using only self-reported dose adherence as a measurement.22,23 Our data were also based on self-reported dose adherence. The overall ARV drugs dose adherence (no dose missed or delayed for greater than or equal to 90 minutes) among the study respondents was 334 (87.0%) based on self-report assessment of missed doses (dose adherence) in a one-week recall at baseline with 95% of prescribed doses. The treatment adherence level found in this study was higher in comparison to studies conducted previously in Botswana (54.0%)24 and Addis Ababa, Ethiopia (81.2%).22

The majority of the respondents 314 (81.8%) did not take any type of substance. The patients being active substance user found in this study were relatively higher in comparison to studies conducted in South Ethiopia (3.8%)23 but lower than the study conducted in Southwest Ethiopia (7.2%).25 The reasons patients cited for missing doses or delays in dosing time in our study were similar with other studies, which includes being sick, forgetting, work load, lack of transportation for re-supply, and associated side effects.22,23

Patients who took one drug (fixed combination ART) per day were 5.32 times more likely to miss their regular dose medication than patients who took more than one drug per day on average (AOR=5.327 (1.990-14.257)). This result was inconsistent to studies done in Eldoret, Kenya26 in which adherence decreases as the number of daily taking drugs increases.

Other variables like sex, age, marital status, employment condition and disclosure of patients who receive ARV drugs, which were significant predictors of dose adherence in other studies, did not show association with missed dose of medication in our study. Some results were reported by other study in Eldoret, Kenya26 that age, sex, and marital status did not significantly affect the dose adherence rate of the participants.

The current study showed that 90% of the health facilities dispensed the ARV drugs to patients when they come for resupply within 1-3 months and 90% of the health facilities receive the ARV drugs bimonthly which was double than the case of Malawi that received the ARV drugs quarterly.3 Only 70% of the ARV products were stored at the appropriate temperature (8-30 °C) including cold chain storage (2-8 °C). An effective and dedicated storage space provides the correct environment for the storage of medicines and commodities and assists the efficient flow of supplies.27

Around 90% of the health facilities followed First Expiry First Out (FEFO) storage protocol. Inadequate storage space contributed for few wrong storage condition with similar situation observed in Sierra Leone.10 Additionally, Singh et al and Kant et al reported the ABC and VED matrix analysis systems should be adopted for optimal and rational use of resources and elimination of out-of-stock situations in hospital pharmacy.28,29 Kokilam et al suggested the problems associated with stock-outs and wastage can be minimized upon implementation of corrective measures in the areas of procurement, drug quantification, distribution, and inventory control.30

The authors are grateful to Haramaya University and Clinton Health Access Initiative (CHAI) for their financial support. We would also like to extend our gratitude to physicians, pharmacists and nurses working at different health facilities for their kind assistance during data collection.

[3] Conflicts of interest COMPETING INTEREST The authors declare that they have no competing interests.

Journal:
Journal of Young Pharmacists
‹ Effect of Solanum nigrum Linn on Acute and Sub-Acute Models of Inflammation up A Study on Herbal Drugs Utilization in Health Care Professionals (Physicians/Academicians) ›