Aryaa and Viswanathswamy: Effect of Solanum nigrum Linn on Acute and Sub-Acute Models of Inflammation

The aim of the study was to see the effect of ethanolic extract of Solanum nigrum Linn on Acute and Sub-acute inflammation.

Wistar rats weighing 150-200gms were used, divided into four groups Group 1 was control group, two groups Group 2 and 3 treated with the plant extracts at 100 & 200 mg/kg b.w and Group 4 treated with indomethacin, 10 mg/kg b.w. Acute inflammation was induced by injecting 0.1 mL of 1% homogenized carrageenan suspension in normal saline to the right hind paw of the rats prior to which drug treatment was given and paw volume was measured using a digital plethysmometer. Sub-acute anti-inflammatory studies were carried out as described by winter and Porter and hematological parameters were estimated. The granuloma tissue formed during the proliferative process was isolated and wet and dry exudates formation was estimated in various treatment groups. The effect of extract and indomethacin on vital organs like liver, kidney, stomach was also studied by performing histological studies.

Study shows that the hydroalcoholic extract of whole plant of Solanum nigrum L. is effective only at higher dose effectively suppressing carrageenan induced inflammation suggesting the inhibition of release of prostaglandin, bradykinin, leukotrienes and polymorphonuclear cells. The histological studies further confirm the anti-inflammatory property of the extract while simultaneously maintaining normal cellular architecture of vital organs than as compared to indomethacin treated group.

The ethanolic extract of whole plant of Solanum nigrum Linn shows promising anti-inflammatory activity on both acute and sub-acute stages of inflammation.

A localized protective reaction of cells/ tissues of the body gets triggered by factors like tissue injury, bacterial infection and chemical injury, is called as Inflammation. A typical inflammatory reaction is characterized by heat, redness, swelling, and loss of function along with accumulation of leukocytes, proteins and fluids at the site of inflammation.1,2,3 Several gastrointestinal, cardiovascular, neurological and psychiatric disorders show involvement of pro-inflammatory mediators acting as culprits in the inflammatory process.4 Categorically inflammation process can be divided into three distinct phases, the first phase characterized by increased vascular permeability and exudation of fluids namely the acute phase followed by the second phase involving infiltration of leuckocytes and granuloma formation called as the sub-acute phase ultimately followed by the third and last phase of chronic inflammation typically characterized by regulated production of pro and anti-inflammatory mediators like the TNF-α, (IL)-1β and IL-6,chemokines, and inducible enzymes.5

Since time immemorial medicinal plants have been used as remedies on human diseases. Pain and inflammation are the most common complications encountered and several such plants and their isolates have been proved to be having anti-inflammatory properties.

Solanum nigrum locally known as Kakamunchi in kannada is a herbaceous weed 30-45 cms in height and found throughout the country.6 Literature reveals the fruit extract of the plant has been evaluated for anti-oxidant and anti-hyperlipedemic activity which was found to be significant.7 The ethanolic extract of the dried fruit has been evaluated for anti-diarroheal, anti-hyperlipedemic, antioxidant, analgesic and cytotoxic activity8,9 The literature review claims the plant to effective on various chronic inflammatory conditions however the whole plant has been previously evaluated only for its activity on acute inflammation10 similarly isolated compounds from the extract of the plant have been studied in-vitro for its effect on LTC4.11 The present study has been designed to evaluate the effect of the hydroalcoholic extract of the whole plant of Solanum nigrum in-vivo on both acute as well as sub-acute phases of inflammation and effect of the extract on different vital organs was evaluated using histopathological studies.

Plant material and extract: The whole plant of Solanum nigrum was collected from the surroundings of Hubballi and Dharwad, Karnataka. The plant was authenticated by Dr. A.B. Sonappanavar, Dept. of Botany, P.C. Jabin Science College, Hubballi. The collected plant material was collected; shade dried and grinded in the mixer.

The powder was stored in air tight polyethylene bag. About 50g of the powdered drug was weighed using an electronic balance and blended with about 200 mL 70% ethanol, refluxed for 1.5hrs at 65-70ºC. This cycle was repeated three times. The extracts freed of the solvent gave a brown solid mass. Total percentage yield of the extract was found to be 9.045%.

Acute Toxicity Studies: The acute toxicity studies were carried out as per OECD guidelines 423. For the toxicity studies swiss albino mice were procured from the animal house of K.L.E.University’s College of Pharmacy, Vidyanagar Hubballi.

Female mice 3 nos. weighing 20-30 g were selected and after acclimatisation were kept for fasting for 18 h being provided only with water. An emulsion of the extract was prepared using 0.5% CMC and dose of 2000 mg/kg b.w. was administered and the animals were observed under open-field conditions for behavioural, locomotion, muscle spasms, tremors, convulsions and mortality for 24 h and further for a period of 14 days for occurrence of any toxic symptoms.

Wistar rats weighing between 150-200 g were obtained from Venkateshwara Enterprises, Bangalore. The rats were divided into 4 groups, each group containing 6 rats each, total of 24 rats. Acute inflammation was produced by injecting 0.1 mL of 1% homogenised carrageenan suspension in normal saline to the left hind paw of the rats. One hour prior to this test drugs were administered

A mark was made at the ankle up till which the paw was dipped and paw volume was measured at interval of 1 h, 2 h, 3 h and 5 h using a plethysmometer. The mean paw volume at different intervals was measured, compared to control and percentage inhibition was calculated using:

The method is based on granuloma formation in rats over a foreign body by subcutaneous implantation of compressed cotton pellets along with grass pith.

Wistar rats weighing 150-200 g were procured, housed in polypropylene cages at room temperature and acclimatised. They had free access to food and water throughout the experiment. Total of 24 animals were chosen for the studies, rats were divided into 4 groups Group I received 0.9% NaCl and served as control, and Group II received indomethacin (10mg/kg b.w.). Group III and IV were administered the test drug S.nigrum plant extract, 100 mg/kg and 200 mg/kg body weight respectively for a period of 14 days each.

Sub-acute inflammation was produced under light ether anesthesia by shaving the ventricle aspect of the abdomen and making an incision of 3-4 cms. In this incision a subcutaneous pocket was made and cotton pellets weighing 10±1 mg each sterilised at 160°C for 30 min less than 15 lbs was inserted. Along with this grass-pith measuring 1/2 mm was also inserted. Drug treatment was started 1 h prior to cotton pellet implantation and the treatment was continued for the next 14 days.

On day 15, blood samples were collected through the retro-orbital route under light anaesthesia and subjected to differential leukocyte count. The animals were then sacrificed and cotton pellets removed by dissection, the granuloma tissue was identified as a firm vascular tissue. It was isolated and subjected to histological studies. Cotton pellets were dried at 60°C for 24 h and net granuloma formation was calculated by subtracting initial weight.

Where: Wc and Wt represent the average weight of granuloma in the control and treated groups respectively.

Animals treated with the hydroalcoholic extract of Solanum nigrum L. showed no behavioural changes and on administration of maximum dose of 2000mg/kg body weight there was no mortality observed even after 14days thus it was concluded that 2000mg/kg is a safe dose. 100 and 200mg/kg b.w. was used for further studies.

Effect of hydroalcoholic extracts of S.nigrum on carageenan induced inflammation

Effect of hydroalcoholic extract of S.nigrum L. and Indomethacin on Dry and Wet and Dry exudate formation

Light microscopic examination of granuloma tissue was done. Similarly vital organs like Stomach and kidneys were isolated and subjected to Histological studies. The study was done at 100x.

Inflammation primarily refers to events occurring on invasion of pathogen or on exposure to noxious substance.12,13 The present study was designed to evaluate the hydroalcoholic extract of whole plant of Solanum nigrum L. on inflammation and effect of the extract on vital organs.

Carrageenan a phlogistic agent induces histamine and 5-HT mediated edema and inflammation in the preliminary one hour followed by release of kinins, leukotrienes and PMN cells in the next 2h until completion of 6h.14,15 Carageenan triggers a biphasic event, phase one involving release of histamine, serotonin, with increased synthesis of prostaglandins phase two is characterised with marked release of prostaglandins, bradykinin, leukotrienes and tissue macrophages.14,15

The extract shows dose dependent action in inhibiting vascular permeability. Dry exudate formation is correlated to positive effect of the drug on proliferative phase and the dried pellet is also indicative of the severity of inflammation.20-22 The study reveals that the extract has exhibited dose dependent activity and is at par to previous studies10 due to presence of steroids, alkaloids and triterpenoids in the extract.11-17

Migration of WBC during the process of inflammation is a biological marker in inflammatory studies. On assessing the hematological parameters it was seen that at both the doses of extract there is decrease in leucocyte and PMN count depicting that the action is not dose dependent. 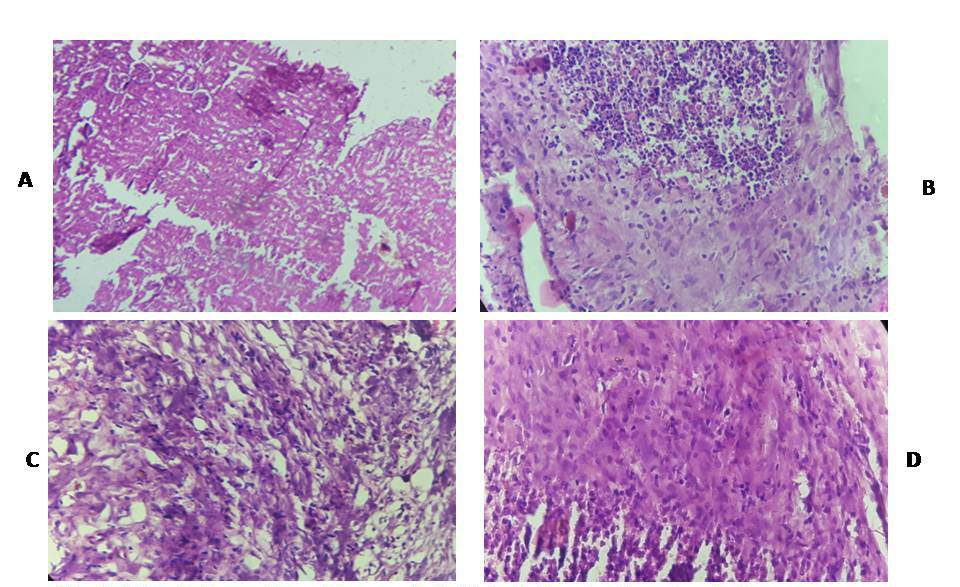 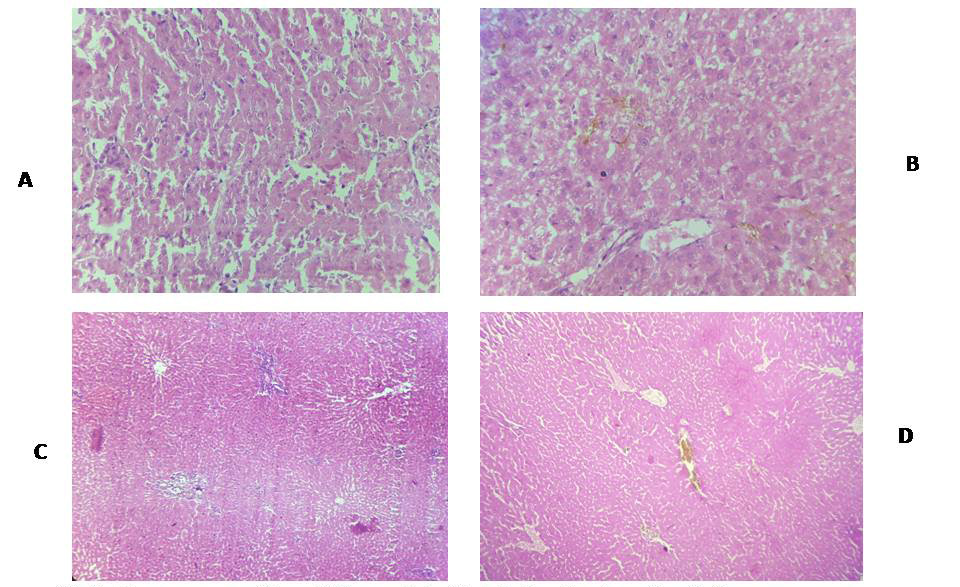 Granuloma Tissue: Examination of granuloma tissue of animals belonging to control as well as treated groups was done. A predominant migration and deposition of macrophages, mast cells, neutrophils, mixed inflammatory mediators was seen in tissue of animals belonging to control group while animals treated with hydroalcoholic extracts of Solanum nigrum depict less deposition of macrophages and predominant deposition of collagen fibres which aid in healing process and signify anti-inflammatory activity Figure 1. 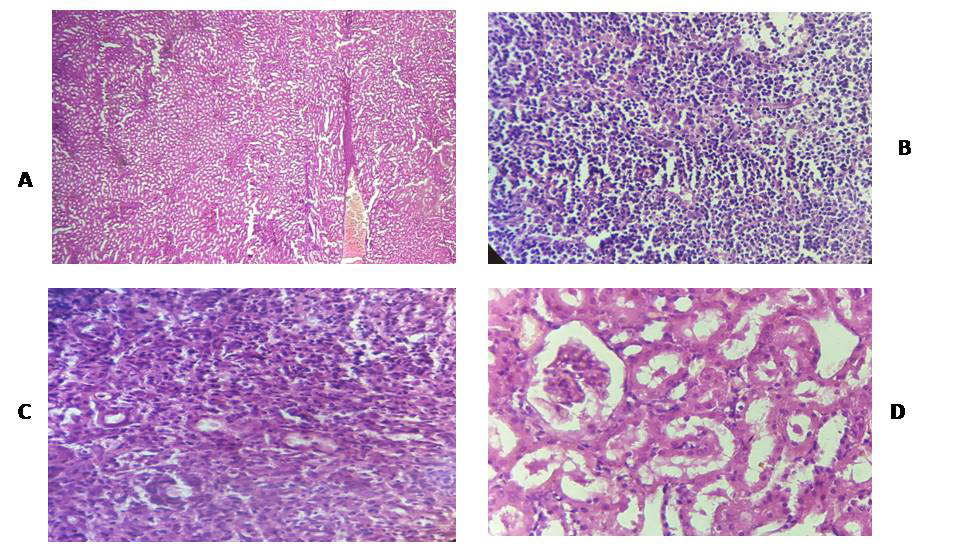 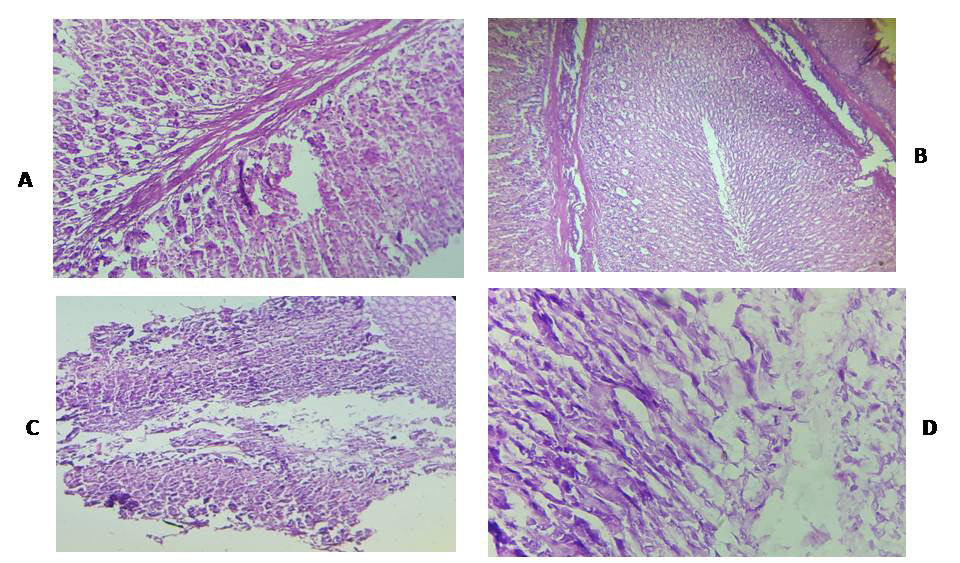 The authors are thankful to The Principal, KLEUs College of Pharmacy, Vidyanagar Hubli for providing research facilities.

Kellett DN , author. On The Mechanism of the Anti‐Inflammatory Activity of Hexadimethrine Bromide by. Br J Pharmacol Chemother. 1966;26(2):351–7