Melinjo (Gnetum gnemon) seeds have been known to have some biological properties. One of them is ant hypercholesterolemia. The present study investigated in vitro and in silico methods to predict potential antihypercholesterolemic of the Melinjo seed extracts of through HMG-CoA reductase inhibitory activity.

Melinjo seed powders were successively extracted by reflux method using five solvents with gradient polarity including: n-hexane, dichloromethane, ethyl acetate and methanol. All extracts were evaluated in vitro using HMG-CoA Reductase assay kit, to analyze the inhibitory activity. Molecular docking of the phytochemical content of the seeds were carried out using Auto Dock Vina, and also Ligand Scout to analyses interaction between ligand and receptor.

Gnetum gnemon belongs to Gnetaceae family is indigenous to Southeast Asia. This plant was known as Melinjo in Indonesia. The leaves and the seeds have been consumed as foodstuff for centuries in Java Island.1 The seeds flour was reported to be rich in protein, carbohydrates and crude fiber.2 The seeds were made to be Emping (local name) by crushing the endosperms that obtained the heated seeds, and the dried drying, and deep-frying.3 Other than as a food ingredient melinjo seeds are also reported to have benefits for health.3

Kato et al reported that the seed extracts of Melinjo demonstrated DPPH radical scavenging, pancreatic lipase and a-amylase inhibitory, and antiimmunostimulatory activities.4 The administration of the seed extracts rich in resveratrol dimers in mice significantly reduced body weight and anti-metabolic syndrome.5 Melinjo seed extract (MSE) demonstrated potent antitumor activity in a colon tumor bearing mice.6 A study in mice, showed that MSE could improve several parameters of metabolic syndrome. In a clinical study, administration MSE decreased the serum uric acid levels by inhibiting the reabsorption of uric acid in the renal tubular epithelia as well as by increasing the HDL cholesterol levels by PPAR agonistic activity with no cause of the damage to health.7 Ethyl acetate extract of the seed demonstrated strong ACE inhibitory activity, and molecular docking analysis indicated dimer of resveratrol was considered as bioactive compound.8

The Gnetaceae family is known to contain stilbenoid group including resveratrol, gnemonols A-L, gnemonosides K, and gnetin E. These compounds were also successfully isolated the stem and root of Gnetum gnemon L.9 While, melinjo seeds have been reported containing gnetin L, gnetin C, gnemonosides A, C, D, and resveratrol.4 This compound distributed in some species plant including Veratrum grandiflorum, Polygonum cuspidatum, Vitis vinifera and a wide variety of other food sources.10,11 Resveratrol has been believed to explain the lower incidence of myocardial incidence.12,13 Animal studies have showen that resveratrol could reduce the expression of HMG-CoA reductase mRNA.14 It has driven considerable interest towards resveratrol in Melinjo molecular activities.

Fresh Melinjo fruits were used in this study were purchased from a local market Jakarta, Indonesia. Seeds were physically separated from the hard-coat and dried. Dried seeds were then ground to a fine flour (mesh size 30) by using a blender. The powdered seed packed in air-tight polyethylene plastic jar and refrigerated at 4°C, prior to analysis.

The HMG-CoA reductase inhibitory activity was performed on the extracts according to Zhou et al with slight modification, with pravastatin as the positive control.17 Briefly, a reaction system in vitro consist of NADPH (4 µl) and the substrate (HMG-CoA, 12 µl) was diluted with potassium phosphate buffer (100 mM, pH 7.4) containing KCl (120mM), EDTA (1mM) and 5 m DTT (5mM) until final volume 200 µl. Two µL HMG-CoA reductase (Sigma-Aldrich, Louis, USA was added to the reaction mixture as initiation time (time 0) and was incubated at 37˚C in the presence or absence of samples solution (1 µl).

The absorbance of NADPH was determined spectrophotometrically every 20 sec for up to 10 minutes at 340 nm using a SpectraMax plus 384 microplate reader, equipped with double-beam lamp and a controlled thermostatically cell holder. Softmax Pro® by Molecular Devices, LLC was used for the control the equipment and data evaluation. Therefore, the inhibitory activities were expressed as % inhibition using the following equation:

Liquid chromatographic separations were conducted on a Xevo G2 Acquity UPLC™ with BEH C18 column (50 mm × 2.1 mm, particle size=1.7 μm, Waters Corp, Milford, MA, USA). The column and autosampler tray temperature were maintained at 35 and 4 °C, respectively. The mobile phase consisting of water containing 0.1% formic acid (A) and acetonitrile containing 0.1% formic acid (B) was used at a flow rate 0.3 ml/min. The gradient elution was from 95% A to 0% A within 6 min and then held for 1 min. From 7 to 7.5 min, the percentage of A was increased to 95% and maintained about 1.5 min, then reduced to the initial condition within 1 min and balanced for 2 mins.

The total running time was 10 min, and the sample injection volume was set at 5 μl. The UPLC system was connected to the mass spectrometer through an ESI interface and was operated in the positive ion detection mode. Nitrogen used for desolvation was 500 L/h, cone gas was set at 16 L/h. The capillary voltage was set at 3 kV, source temperature 110 °C, desolvation temperature 300°C. Data acquisition was processed with Masslynx 4.1 software.

In silico simulations were carried out using platform with core i7 processor. A dataset of stilbene from Melinjo and Pravastatin were obtained from the published literature and used for docking. Structural information was downloaded from http://www.chemspider.com/Chemical-Structure. X-ray crystal structures of HMG-CoA reductase in complex with the two inhibitors were downloaded 3-hidroxy-3-metyl-glutaric acid [MAH] and simvastatin acid from the Protein Data Bank (PDB), complex of catalytic portion of human HMG-CoA reductase (HMGR) (PDB ID: 1DQ8)18 and HMGR in complex (PDB ID: 1HW9)19 http://www.rcsb.org/pdb/

AutoDock4.2 was used for molecular docking studies calculation, using a Lamarckian genetic algorithm between flexible ligand and rigid receptor, a population size of 300, a maximum of 250000 generations and 2 500 000 evaluations for 100 GA runs.(20)(20) The root means square deviation tolerance was set to 2.0 Å for the clustering of docking results. Interaction ligand-receptor were processed using pharmacophore feature of LigandScout (Inte:Ligand, Vienna, Austria). Visualization all ligand for hydrophobicity used program UCSF Chimera 1.10.2.

HMG-CoA Reductase appears as a tetrameric protein complex, structure of enzyme is shown on image below (Fig 3A and 3B). Due to efficiency of time, docking procedure was conducted using dimeric structure of enzyme complex. The validation was carried to assure the accuracy and precision of the used method. HMG-CoA Reductase enzyme complex [PDB ID 1HW9] and [PDB ID 1DQ8] were downloaded from protein data bank and redocked against their original ligand. MAH as the original ligand of 1DQ8 gave free binding energy value -7.19 kcal/mol and RMSD value 1.12 Å. HMG-CoA Reductase complex with simvastatin gave free energy binding value as high as -9.76 kcal/mol and RMSD as high as 1.45 Å. Obtained RMSD value of redocked MAH and simvastatin are lower than 2.00 Å. Therefore, the docking method is valid to dock several compounds of dichlormethane melinjo seed extract. Table 3 shows free binding energy of docked stilbenes in Melinjo seed with their ligand.

[i] *The values are average from the triplicate experiments. Sample concentrations are 100ppm.

[i] *The values are average from the triplicate experiments.

HPLC Chromatogram of resveratrol (A) and (B) dichlormethane extracts 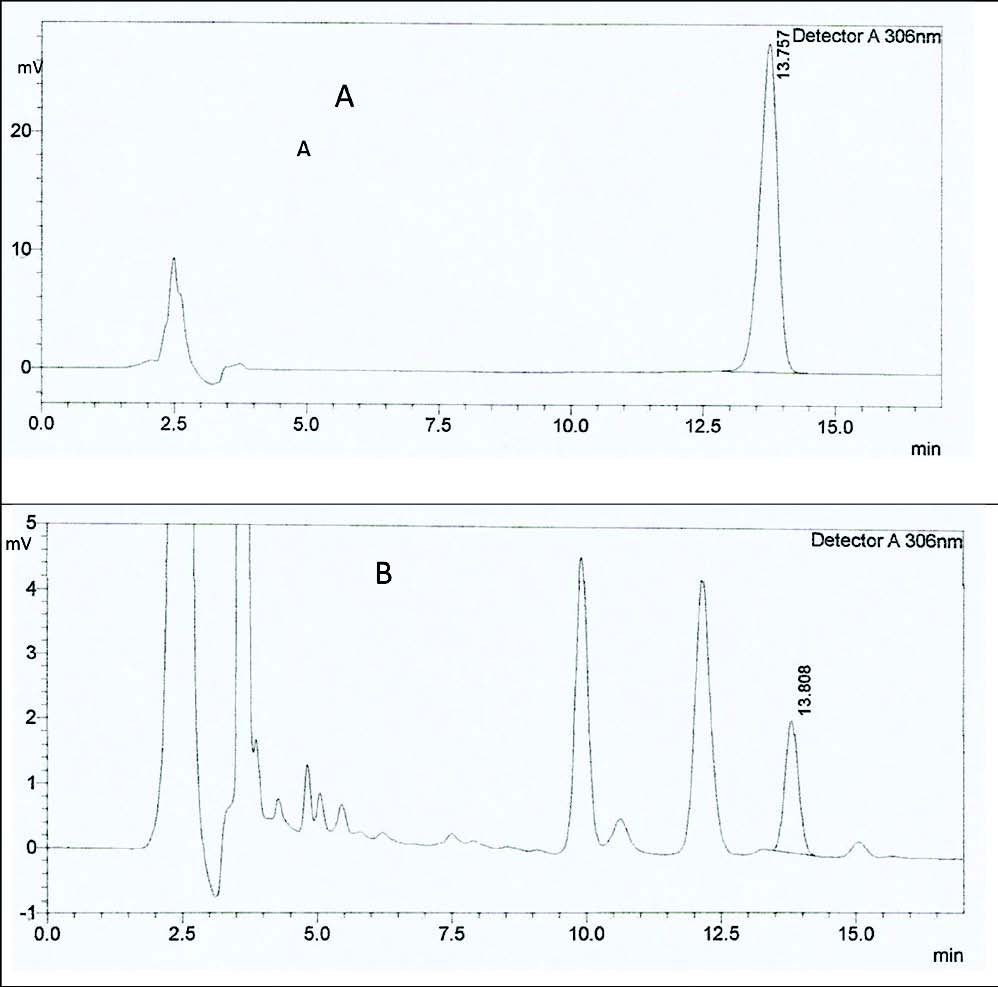 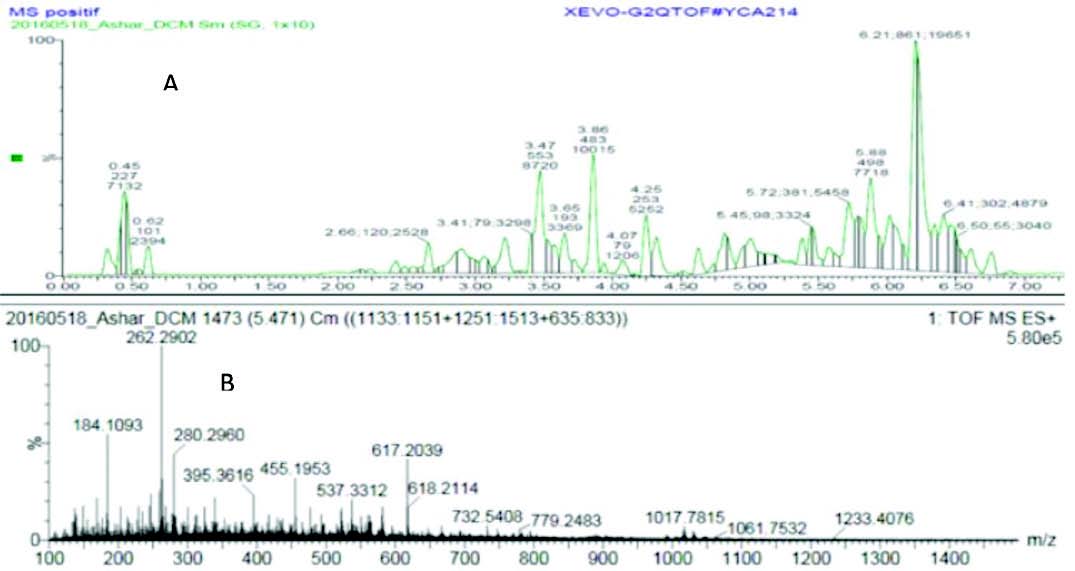 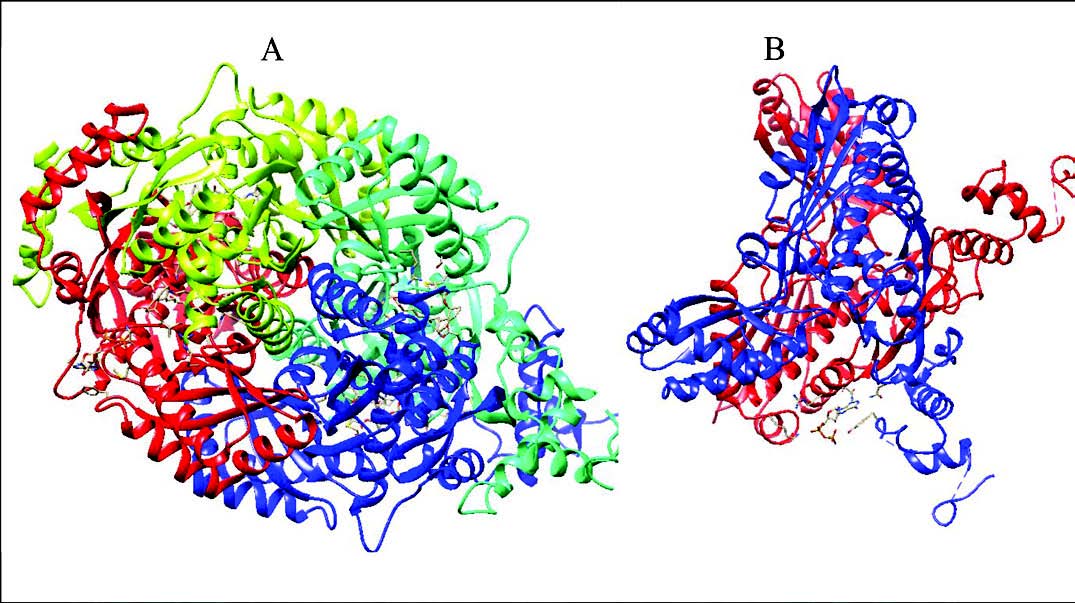 Gneteceae family was well known to be rich in stilbenoids and to be used as traditional medicine for treatment of bronchitis, arthritis, and asthma. Stilbenoids oligomers have pharmacological activity, such as: to reduce the level of sugar in the blood, show anti-inflamatory activity and induce apoptosis in colon cancer. Stilbene from Ampelopsis brevipedunculata var. hancei revealed ACE inhibitory activity in silico and in vitro. Resveratrol tetramers interact with ACE more favorably than other smaller oligomers. One member of this family is Gnetum gnemon. The fruits, leaves, and seeds are used as an ordinary vegetable in Indonesia. The occurrence of various stilbenoids was also reported in the seeds, roots and stems of the plant, however there is no information about the usage of the seeds as traditional plants. In the in silico study, dimeric resveratrol from the seeds of the plant demonstrated ACE inhibitory activity.8 The seed of Melinjo revealed strong antioxidant and tyrosinase inhibitory activity

All samples were evaluated in vitro for their capability to inhibit human recombinant HMG-CoA reductase catalytic activity. The IC50 value of pravastatin as positive control was determined in preliminary test for the standardization. Calibration curve yielded a linearity with R-value=0.997 and regression equation of Y=109.8X+45.909. Obtained IC50 value of pravastatin was 87.76 nM, which was in concordance range (44.10 – 70.25 nM) with other study.22,23,24

Sample solutions were observed in the same way of standard. Each peak in chromatogram was identified by comparing the retention time and UV spectra of the samples with that standard. Quantitation was carried out by standard external. Peak’s area, then, plotted into regression equation. Resveratrol was present on three samples include ethyl acetate extract, dichloromethane, and methanol extract, with a result of 8.190, 3.184, and 686 mg/kg, respectively (Table 4). Meanwhile, n-hexane and aqueous extract gave a non-significant result on HPLC separation and UV detection. The retention time of samples was similar to resveratrol after 7 minutes. UV spectra also compared with a previous study,10 which displayed a split peak, shown in Figure 1.

Results of docking were analyzed and the best-docked confirmation was chosen based on their number of conformations in a cluster and the lowest free energy binding. Higher numbers of conformations and the lowest binding energy indicated better affinity of the compound to be docked into HMG-CoA reductase enzyme with PDB ID 1DQ8, 1HW9. As shown in Table 3, external compounds, piceid, gnetin C, gnemonol L, gnemonol M, viniferin and latifolol docked better and results lower free energy binding than the original ligand MAH in the HMG-CoA reductase enzyme [PDB 1DQ8]. Gnetin C, gnemonoside B, gnemonol M and gnemonol L, docked better than the ligand SIM4 (simvastatin) with PDB 1HW9 and ligand pravastatin as reference drug.

Compounds in Melinjo seed perform contacts with LEU853, LEU857, and LEU862, which these amino acids are the most important residues for hydrophobic interaction. There are several amino acid seed those give similarity with statin drug (Pravastatin) and MAH as the original ligand of HMG-CoA Reductase: LYS691, ASN658, MET657, MET655 with PDB 1DQ8; amino acid LYS691, LEU853, GLU559, LYS735, HIS752, LEU857, ASP690 with PDB 1HW9 (Figure 4, 5 and 6). These results indicate that the interaction of piceid, gnetin C, gnemonol L with HMG-CoA reductase (PDB ID 1DQ8 and 1HW9) residues might lead another way to develop novel HMG-CoA reductase inhibitor. Further study was needed to evaluate anti-hypercholesterolemia activity of the extract and stilbenoid from the seed of this plant through preclinical and clinical studies. In addition, safety study was needed to guarantee the use of the extract. 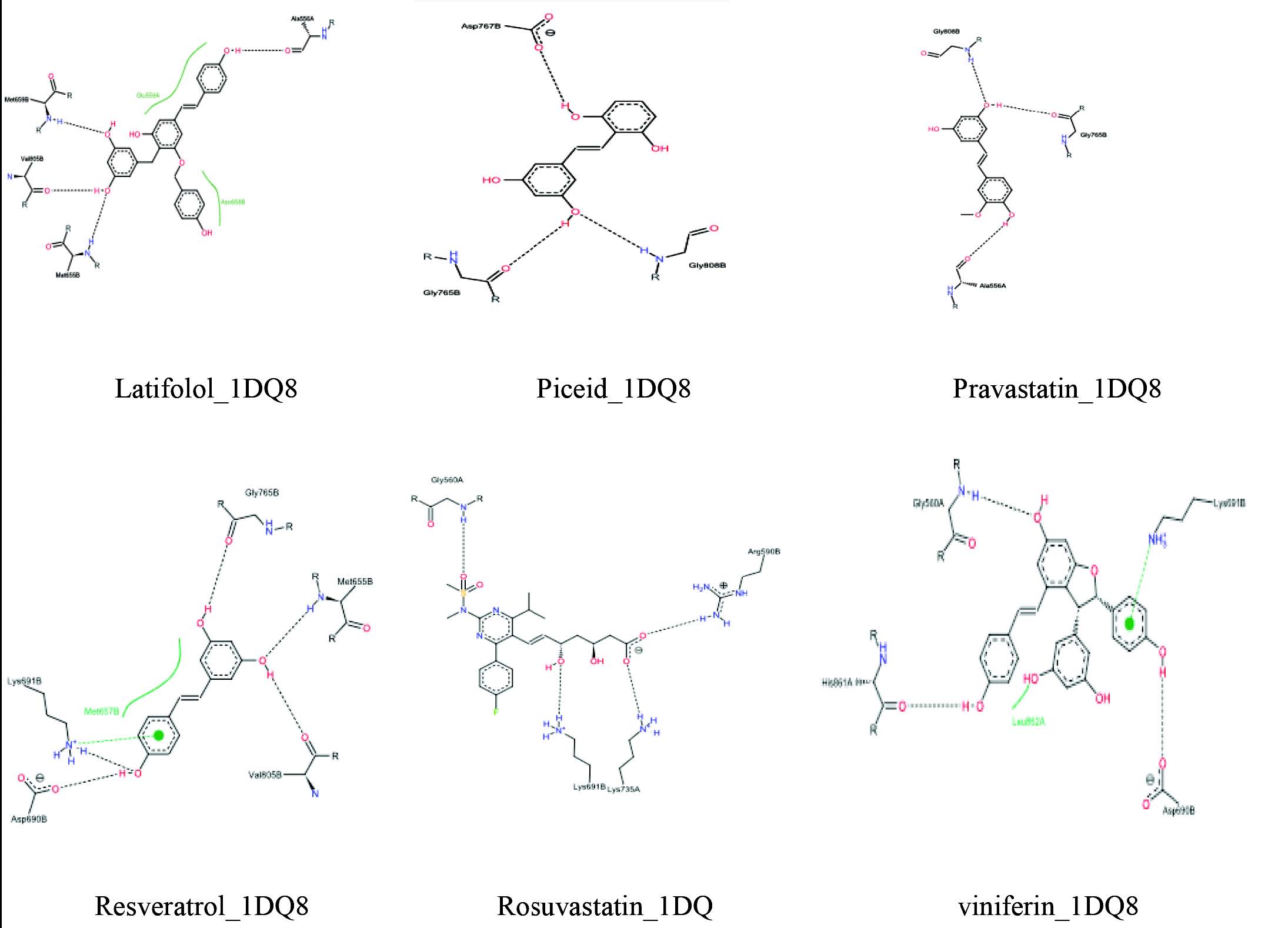 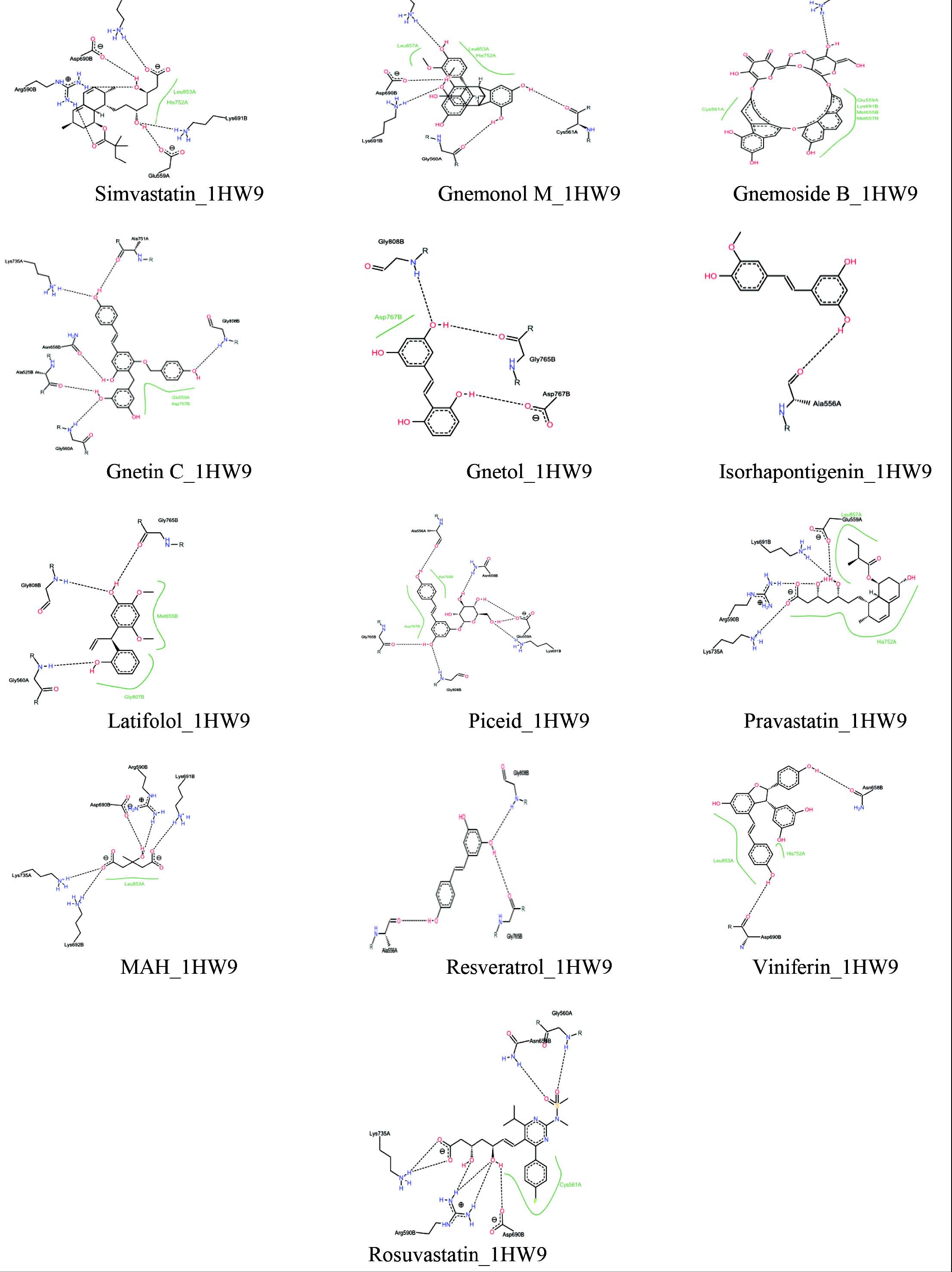 The molecular surface of the binding pocket is coloring and displayed according to hydrophobicity (blue = hydrophilic, orange = hydrophobic), Docking poses of all inhibitors 1-12 obtained for 1DQ8 (A) and 1HW9 (B)

Based on the results of the study, it was concluded that melinjo seed dichloromethane extract not only able to hinder the enzymatic activity of HMG-CoA reductase, but also is potentially prohibit with MAH substrate against HMG-CoA Reductase receptor, which might suggest its role in treatment of hypercholesterolemia.

This study was funded by Grant of PITTA 2016 provided by the Directorate of Research and Community Enggagement, Universities Indonesia.

[3] Conflicts of interest CONFLICT OF INTEREST There is no conflict of interest.