Rice bran oil has many helath benefit. The biologically active compounds of rice bran oil are fatty acids, squalene, tocopherols, phytosterols, tocotrienols, oryzanol, and polyphenols. Gamma oryzanol is a combination of at least 10 components of ferulic acid esters and alcohols triterpene. Gamma oryzanol has pharmacological activity includes cardiovascular disease, antioxidant, anticancer, antidiabetic, antiulcerogenic, neuroprotective and action immunomodulator. Ionic liquids are an environmentally friendly solvent used in the extraction and separation of bioactive compounds from plants. This study was conducted to evaluate the effect of inorganic salts addition on ionic liquid [Bmim]PF6 in increasing levels of gamma oryzanol from rice bran.

In the experiments, IL [Bmim]PF6 - MAE method was used to separated gamma oryzanol compound, and then was partitioned with hexane after the addition of inorganic salts: KH2PO4, NaCl, NaNO3 and Na2CO3, respectively. Gamma oryzanol content was determined by HPLC analysis. A mixture of mobile phase (methanol:acetonitrile:isopropanol (5:4:1) and isocratic conditions at a wavelength of 327 nm. The flow rate is set at 1 ml / min.

The highest levels of γ-oryzanol was produced from the addition in KH2PO4 + : [Bmim] PF6 by 0.26 ± 0.001 mg/g. The mechanism of salting-out effect of the compound due to the interaction of different types of interactions between solutes (ions of inorganic salts and ionic liquid) and solvent.

Rice bran is a component of the raw rice obtained when it is separated from the endosperm during the rice milling process.1 Rice bran is a by-product of rice milling process that has potential economic value due to rice bran oil content. Rice bran oil has a high nutrient and some bioactive compounds. Gamma oryzanol, tocopherols, tocotrienols, phytosterols, polyphenols, and squalene were found in rice bran oil.2 Gamma oryzanol was reported to have some biological properties, such as antioxidant,1 anti-inflammation,3 cardioprotection,4 and hypolipidemic.5 One of the contents of rice bran oil is gamma oryzanol with a concentration concentration between 1.5 - 3%.6

Gamma oryzanol is a chemical compound that is mostly composed of the complex ester trans-ferulate (trans-hydroxy cinnamic acid) with phytosterols (sterols and alcohol triterpene), including cycloartenol, β-sitosterol, 24-methylene cycloartenol ferulate and predominant campesterol.7,8 Figure 1 shows the molecular structure of trans-ferulate of four phytosterols as the main content of gamma oryzanol.

Some researchers are beginning to switch to the use of environmentally friendly solvents such as ionic liquids9,10 Besides that, IL can be utilized as a solvent in the extraction and separation of bioactive compounds from plants.11 Ionic liquid are pure salt compound consisting of ionic components (cations and anions) that melt at a temperature below 100°C.12 Application of ionic liquid increased total phenolic content and total flavonoid if compared to conventional solvent.9 Tanshinone and crypto tanshinone were significantly extracted from Salvia miltiorrhiza Bunge by application of IL (C14mimBr and C16mimBr).13

Butylmethylimidazolium hexafluorophosphate ([BMIM] PF6) was based on the solutes charged state or relative hydrophobicity. The length of IL alkyl chain indeed exerts a significant impact on the extraction yield of lipophilic compounds. Also the hydrophobic ion liquid phase exhibits a high affinity for ionic compounds when neutralized.10 The ionic liquid [Bmim] PF6 has [PF6-] hydrophobic anion as shown in Figure 2.

The problem of the use of IL was a suitable method to extract bioactive compounds from IL phase. The addition of salt inorganics such as KH2PO4, NaCl, NaNO3 and Na2CO3 were reported to increase the level of the bioactive compound in extract via “salting-out” effect. The mechanism of effect of salting-out the complex due to the interaction of different types of interactions between solutes and solvent.14 The addition of lithium salt on [Bmim]Br increased the concentration of syringin and oleuropein from Syringa reticulata var mandshurica significantly.15

MAE is an extraction method that utilizes microwave radiation to accelerate selective removal extraction by heating the solvent quickly and efficiently. Microwaves reduce enzymatic activity that damages the target compound.16 Some of the advantages of the method MAE include the extraction time is shorter, the use of the volume of solventless, easily adapted to conditions ranging from the size of the sample, temperature, pressure, amount of solvent, and the number of samples. Gamma oryzanol can be separated and quantified using high-performance liquid chromatography (HPLC). In this study will be conducted IL-MAE extraction method using a solvent ionic liquid [Bmim]PF6 by optimizing the addition of some inorganic salts to separate gamma oryzanol from IL so that levels of gamma oryzanol in rice bran extract can increase. 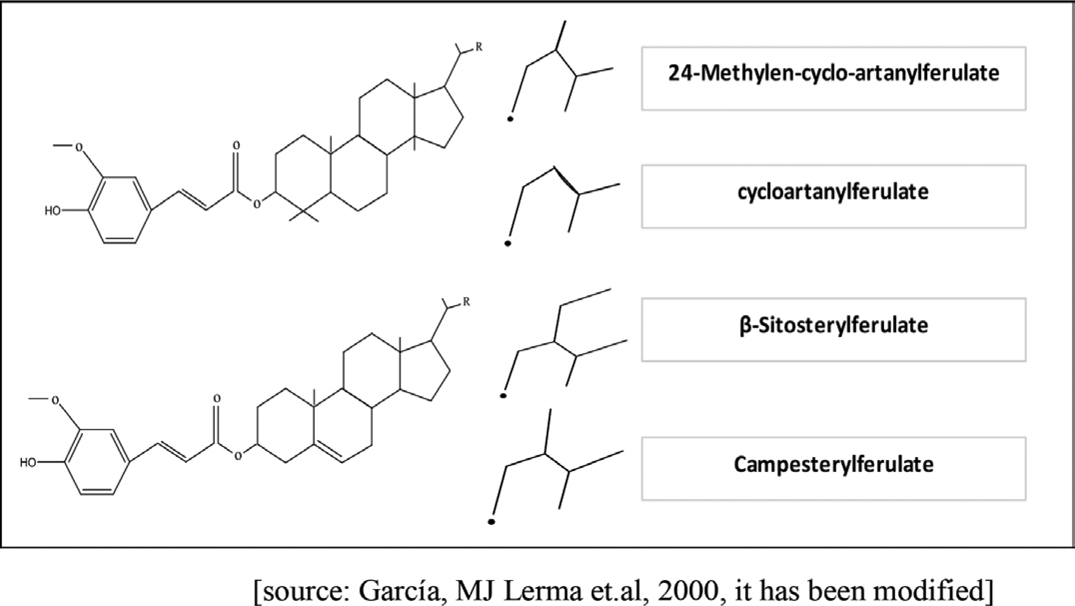 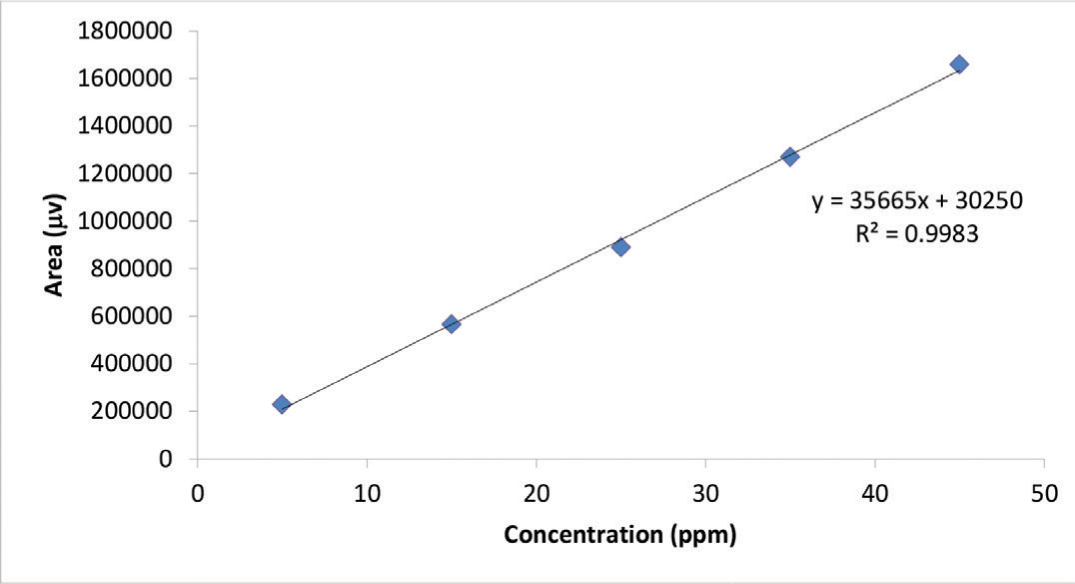 [Bmim]PF6 (1M) was dissolved by the addition of 11% isopropanol (v/v) and then was sonicated for 10 minutes until homogeneous.

In this study the optimization of some inorganic salts solution such as KH2PO4,NaCl, NaNO3 and Na2CO3 at a concentration of 0.01 mol.

Stabilized rice bran (1 g) was put in a flat-bottom flask, then added 10 mL of solvent ILs with the appropriate volume of experimental design 1:10 (b/v). After that the flask containing stabilized rice bran powder and IL concentration (1 M) was then put in the microwave that has modified with the same treatment includes variation extraction for 10 minutes and 30% microwave power. After the extraction process, the sample cooled at room temperature for 10 minutes. Then filtered using a filter paper to obtain a filtrate desired as a result of extraction MAE. Furthermore, the filtrate added N-hexane (1 ml) and 1 ml of inorganic salt. Then vortex for 10 seconds and was followed centrifuged at 3000 rpm for 15 minutes to separate the residue with the supernatant.

The supernatant (0.5 ml) was diluted by isopropanol and was put in a flask up to 10.0 ml. Then the solution of the sample (20 ml) was injected into the HPLC system (Shimadzu, Japan). The HPLC was equipped by a column type Zorbax Eclipse Plus C-18 Analytical 4.6 x 150 mm, 5μm (Agilent Technologies-USA). Methanol:acetonitrile:isopropanol (5:4:1) was used as mobile phase under isocratic conditions, with flow rate 1 ml/min, and monitored by UV detector wavelength set at 327 nm. Each sample measured with three repetitions.

The addition of various inorganic salts on ionic liquids 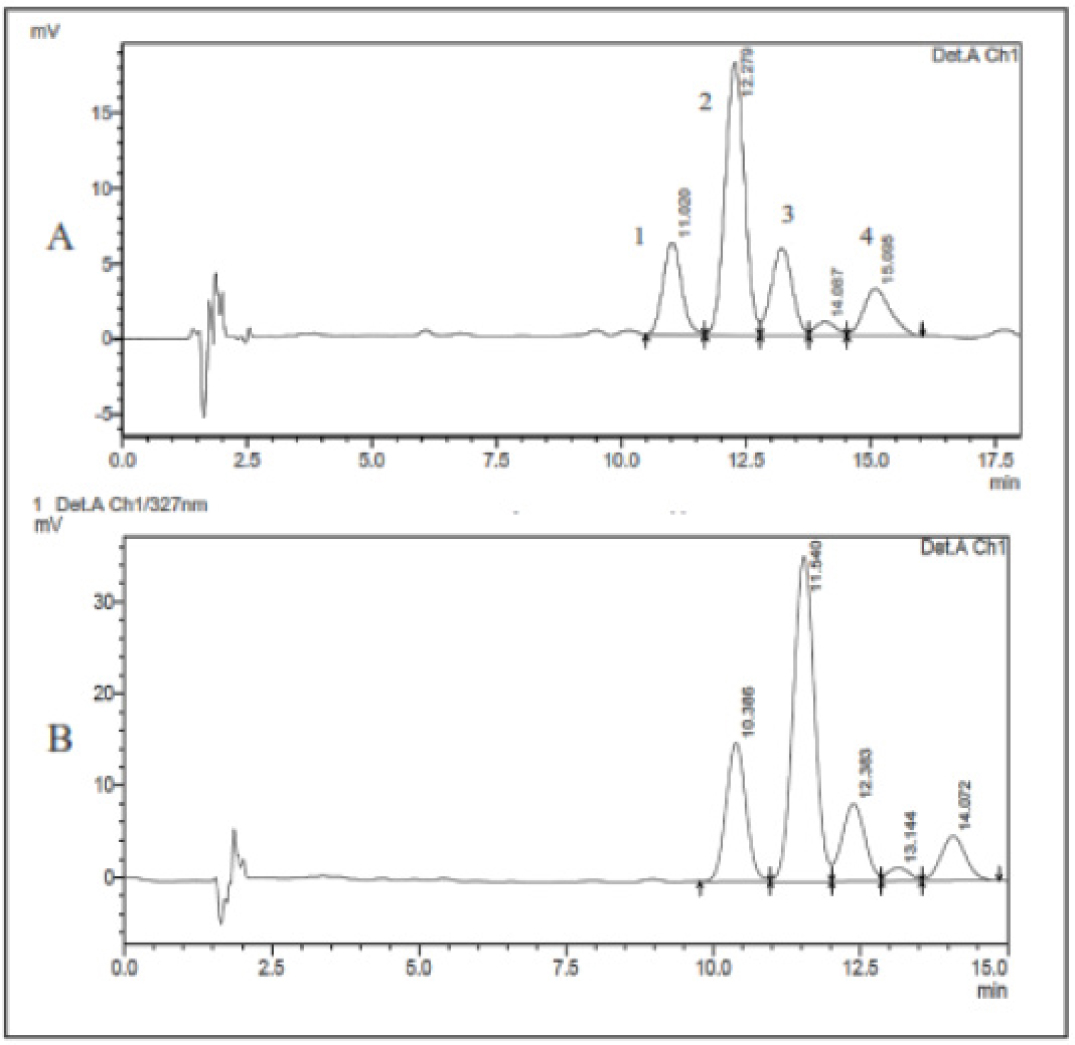 Effect of Addition of Inorganic Salts on Ionic Liquid. 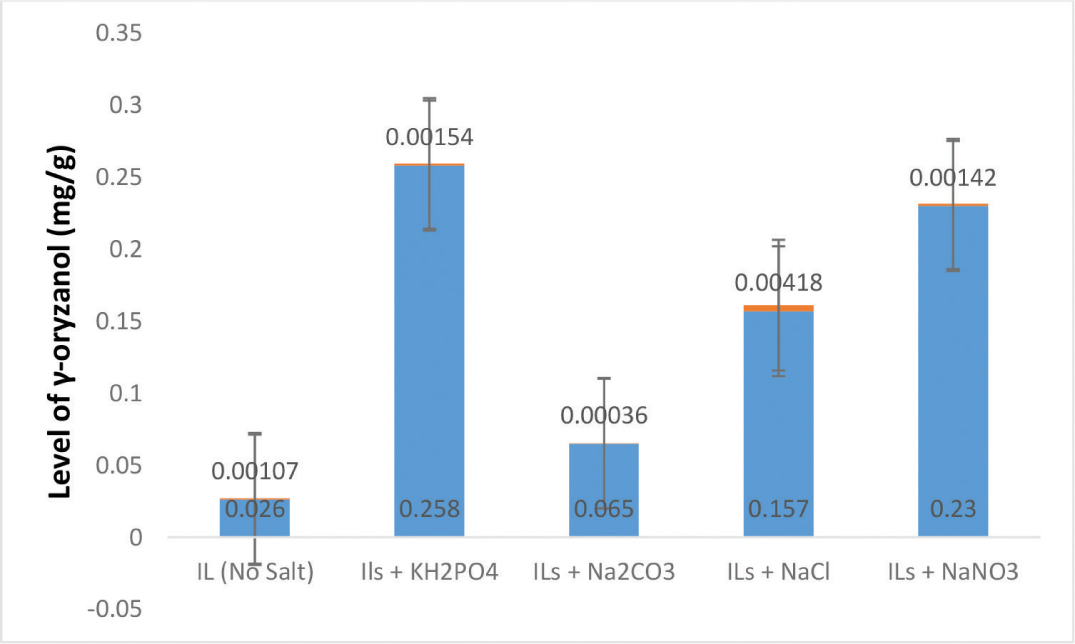 The influence of the addition of inorganic salts on the solubility of the solute in an aqueous solution is very complicated, especially since a large number of different types of intermolecular interactions participate between ions and the solvent, ions and ionic solutes, and ions of the solute and solvent. Some theory of salting out the most commonly involves the concept of structure-forming (cosmotropic) salt, wherein when salt dissolved in an aqueous solution a process of hydration of ions are the ions are surrounded by a layer of water molecules, water molecules are moving so that its role as a solvent for molecular or other ions reduced. The addition of an inorganic salt to a solution of the ionic liquid causes to be “competitive” with each other for solvent molecules.14-17,18,19

The competition was won by inorganic ions as inorganic ions have a strong affinity and migration of solvent molecules to escape from the ion ionic liquid with salt inorganic to reducing the strength of ion hydration and cause the ionic liquid phase will separate from the rest of the solution. It can be concluded that the salting-out effects associated with different power ion hydration of inorganic salts.14 The recent studies have demonstrated that either direct ion-macromolecule interactions or interactions with water molecules in the first hydration shell of the macromolecules govern the Hofmeister effect as well as phase separation in ATP systems (aqueous two phase system).17

In Figure 4 shows the results of HPLC chromatogram of gamma oryzanol obtained from an IL-MAE method with the addition of salt KH2PO4. In this study, the extract contained four components of the main content of gamma oryzanol referred to Lerma-Garcia et al, 2009 study.20 24-Methylene cycloartenol ferulate has the highest peak area compared to other peaks and this is considered to have the highest antioxidant activity compared cycloartenol ferulate, campesterol ferulate and β-sitosteril ferulate.21

In previous research that has been conducted by researchers with MAE method using isopropanol as conventional solvents and gamma oryzanol content of 0.25 mg /g. According to the Mandal et al 2007, this may be due to the high temperature and high power breakdown cell walls intensify.22 Each microwave power influenced by extraction time and extraction temperature. An interaction between the solvent isopropanol and the matrix material so that the rice bran can absorb microwaves. Rapid heating of the cell causes cell breakdown and spending target compounds into the polar solvent efficiently. Results of the previous study by Duvernay (2005) shows an increase in rice bran oil was obtained from the temperature of 80ºC to 120º C using microwave assisted extraction (MAE) with isopropanol as solvent extraction, where the high-temperature isopropanol as solvent proved to be significantly better than the rice bran oil by hexane extraction.23 The stability of the γ-oryzanol in isopropanol solution was high enough at room temperature.24 A solvent with medium or low volatility, such as isopropanol is more preferable, especially at room temperature.

The mechanism of salting-out effect of the compound due to the interaction of different types of interactions between solutes and solvent. The addition of various inorganic salts on the IL as an alternative for the recovery of active compounds from plants. The highest levels of gamma oryzanol (0.26 ± 0.001 mg/g) was resulted from the addition of salt KH2PO4 + [Bmim] PF6.

This research financially supported by the Directorate of Research and Community Engagement (DRPM), Universitas Indonesia through PITTA 2016.