Investigation of Oligosaccharides for Prebitoic Action on Vaginal Lactobacilli

Vaginitis is a very common gynaecological problem in women of all age groups resulted in millions of visit to physician. Decrease in vaginal Lactobacilli is one of the reasons of Bacterial vaginitis. Approach that could improve decreased level of Lactobacilli and inhibit growth of pathogenic bacteria can be alternative to antibiotic therapy. Oligosaccharides influence the growth of Lactobacilli species and benefits vaginal ecosystem. The present study was designed to evaluate prebitoic potential of oligosaccharides in vaginitis.

The potential of oligosaccharides to stimulate the growth of three selected vaginal Lactobacilli strains was studied by optical density, pH, titrable acidity and dry mass after 48 h of incubation. The antimicrobial effect of vaginal Lactobacilli in presence of oligosaccharide against pathogenic bacteria E. coli and C. albicans was studied by agar diffusion method. Vaginal irritation test was studied on female Swiss albino mice.

Increased lactic acid production and lowering of pH by Lactobacilli strains in presence of oligosaccharides confirmed that oligosaccharide can stimulate the growth of selected Lactobacilli species. Optical density and dry biomass was also increased during 48 h of incubation. Higher zone of inhibition was observed in presence of prebiotic compared to control (without prebiotic). Vaginal irritation study showed no significant changes. Conclusively, oligosaccharides supported the growth of selected strains and could restore bacterial environment.

Human microbiota is microorganisms colonized in human body. Microbiota generally resides on skin, mouth, gut and vagina.1 Female genital tract is one of the major sites occupied by microbiota, commonly dominated by Doderlen’s bacilli (Lactobacillus species).2 Presence of Lactobacilli is important sign of healthy vagina which inhibits the growth of pathogenic microorganism. Lactobacilli avoid growth, hold and expansion of pathogenic microorganism. Antimicrobial activity of Lactobacilli is owed to H2O2, bacteriocins and biosurfactants production.3 Vaginal Lactobacilli produces lactic acid from anaerobic glycolysis of glycogen that comes from shedding of vaginal epithelium. Lactic acid produced by Lactobacilli in concentration of 110 mM with acidic vaginal milieu pH 3.5 is the reason to prevent attack of pathogenic microorganism in vagina. Another probable reason is competition for the supplements, steric avoidance for the adhesion to the epithelium. It is quite difficult to identify different species of Lactobacilli colonizing vagina with culture dependent methods such as H2O2 production test, catalase reaction and sugar utilization test.4 Whereas culture independent identification methods like sequencing of 16S rRNA of bacterial colonies, terminal restriction fragment length polymorphism (T-RFLP) of 16S rRNA, qPCR and next generation sequencing (NGS) have wide applications in the field of microbiology.5 Common Lactobacilli isolated from the vagina include L. acidophilus, L. fermentum, L. plantarum, L. brevis, L. jensenii, L. casei, L. cellobiosus, L. leichmanii, L. delbrueckii, and L. salivarius. Of all these species, L. acidophilus, L. fermentum and L. casei has been the vaginal Lactoba cillus most widely accepted to be predominant.6 Composition of vaginal flora may change due to disturbances in hormone levels, anti-toxin medications, sexual exercises and improper cleanliness.7 Compromise in healthy vaginal flora i.e. decrease in Lactobacilli is the main reason for bacterial vaginitis (BV). If asymptomatic BV is untreated, it can extend to Sexually transmitted infections (STI), including Neisseria gonorrhea, Chlamydia trachomatis, Trichomonas vaginalis, Herpes simplex infection sort 2 (HSV-2), Human papilloma infection (HPV), and in addition HIV, premature birth, post-abortal contamination, unsuccessful labour, and upper conceptive tract infection. Symptomatic BV is treated with oral metronidazole for 7 days, metronidazole gel for 5 days or clindamycin cream for 7 days. Resistance offered by microorganism to antimicrobials is currently becoming a major concern.8

Antibiotic therapy causes disturbance of normal flora i.e. decrease in Lactobacilli and it is not possible to restore the pre-BV flora after antibiotic treatment. Use of suppositories to treat vaginal infection is also restricted because of constant irritation and noncompliance of working women. Recurrence is common after antibiotic therapy, may be because of résistance of pathogenic microorganism and/or failure to restore vaginal flora to pre BV condition. Recurrence of BV is 30% inside 3 months and 50% within 6 months of antimicrobial treatment.9

Prebiotic are non-digestible oligosaccharides that are not digested in upper gastrointestinal tract and fermented in colon. Fermentation of oligosaccharides provides energy to beneficial microbial flora of lower intestine. FOS and GOS are qualified as prebiotics.13

Effect of Oligosaccharides on the Growth of SelectedLactobacilli Strains:Inoculum Preparation and Cultivation Conditions14

The % titratable acidity was calculated by using formula:

The pH of each sample was measured by an electronic digital type pH meter17 (Equip-Tronic, Mumbai, India). The pH meter was standardized using reference pH 4.0 and pH 7.0 buffer solutions.

Determination of Antimicrobial Activity against E. coli and C. albicans16

Cell-free supernatant was collected by centrifugation at 4,000 rpm for 15 min. Antimicrobial assay was performed by agar well diffusion method. MacConkey agar and potato dextrose agar were used for E. coli and C. albicans respectively. After solidification of agar 0.1 mL of overnight cultures of E. coli and C. albicans was spread and 100 µL of cell free supernant was added in 6 mm wells. Plates were kept in refrigerator to facilitate diffusion for 4 h. Then plates were incubated aerobically at 37°C for 24 hours in case of E. coli and for 48°C in case of C. albicans. Zone of inhibitions were recorded in triplicate

In order to study the safety of prebiotic effect (FOS and GOS), vaginal irritation study using female Swiss albino mice was conducted. Fifteen mice were divided into 3 groups. The FOS and GOS gel was prepared using nutrient agar (2% w/v) as a gelling agent. The prepared gel was applied by micropipette to the vagina of mice in quantity of 0.1gm once daily for 10 days. The toxic manifestation, if any, on the vaginal region was assessed by observing the vaginal mucosa at pre-selected time intervals between and after treatment for 10 days. The findings were recorded for each animal.

Effect of Oligosaccharides on the Growth of Selected Lactobacilli Strains

Lactic acid and Short Chain fatty acids produced by Lactobacilli contribute to the maintenance of a low vaginal pH which is thought to be an important control mechanism preventing colonisation by pathogens. Acidification of vagina produces unfavourable condition for growth of Salmonella typhimurium, Helicobacter priori, Candida albicans, E. coli and G. vaginalis.22 The reduction in pH was from 6-6.5 (t=0) to 4 - 4.5 after 48 hours of incubation. The normal pH of vaginal fluid is about 4.5 - 5.5. The resulting low pH is important for preventing non indigenous organisms in the vagina.

Effect of FOS and GOS on growth curve of Lactobacilli strain 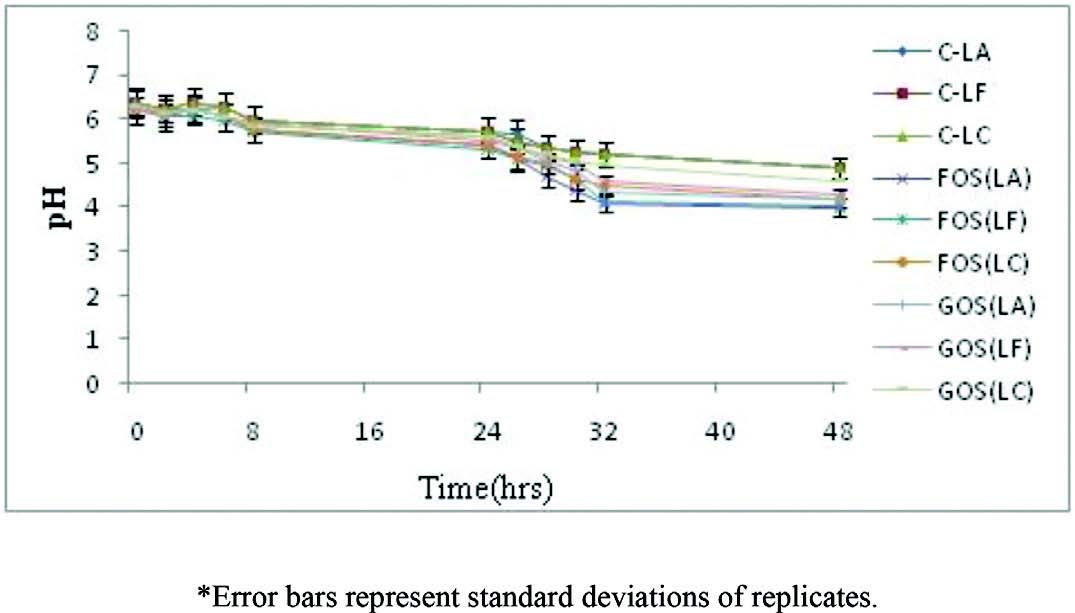 The optical densities of all the Lactobacilli strains containing FOS tended to be slightly higher than the optical densities of the GOS and the control. Shorter chain fructo-oligosaccharides containing primarily fructose chains and fructose chain with terminal glucose bound by β (1,2) bond glycocidic linkages could have undergone rapid degradation in highly acidic environment. Rapid degradation of FOS was supporting faster growth of Lactobacilli that was indicated by higher optical density in FOS as compared to GOS.23 The bacterial growth started to lag phase from early period of Inoculation. Lactobacillus acidophilus, Lactobacillus fermentum and Lactobacillus casei growth approached to exponential phase after 8 hours. Then, all bacterial growth reached to stationary phase after 28 hours and turned to be relatively constant for 48 hours.

Antimicrobial activity of Lactobacillus acidophilus containing FOS and GOS against E.Coli and C.albicans

The sensitivity of the pathogenic microorganisms to inhibitory substances produced by selected Lactobacilli is presented in Table 2 and Figure 4. The inhibitory activity was distinct towards Gram –ve E. coli compared to C. albicans, both being common vaginal infection causative agents. No zone of inhibition was observed against C. albicans. The absence of effect on C. albicans growth can be correlated with the resistance of yeasts to acidic conditions and H2O2.25 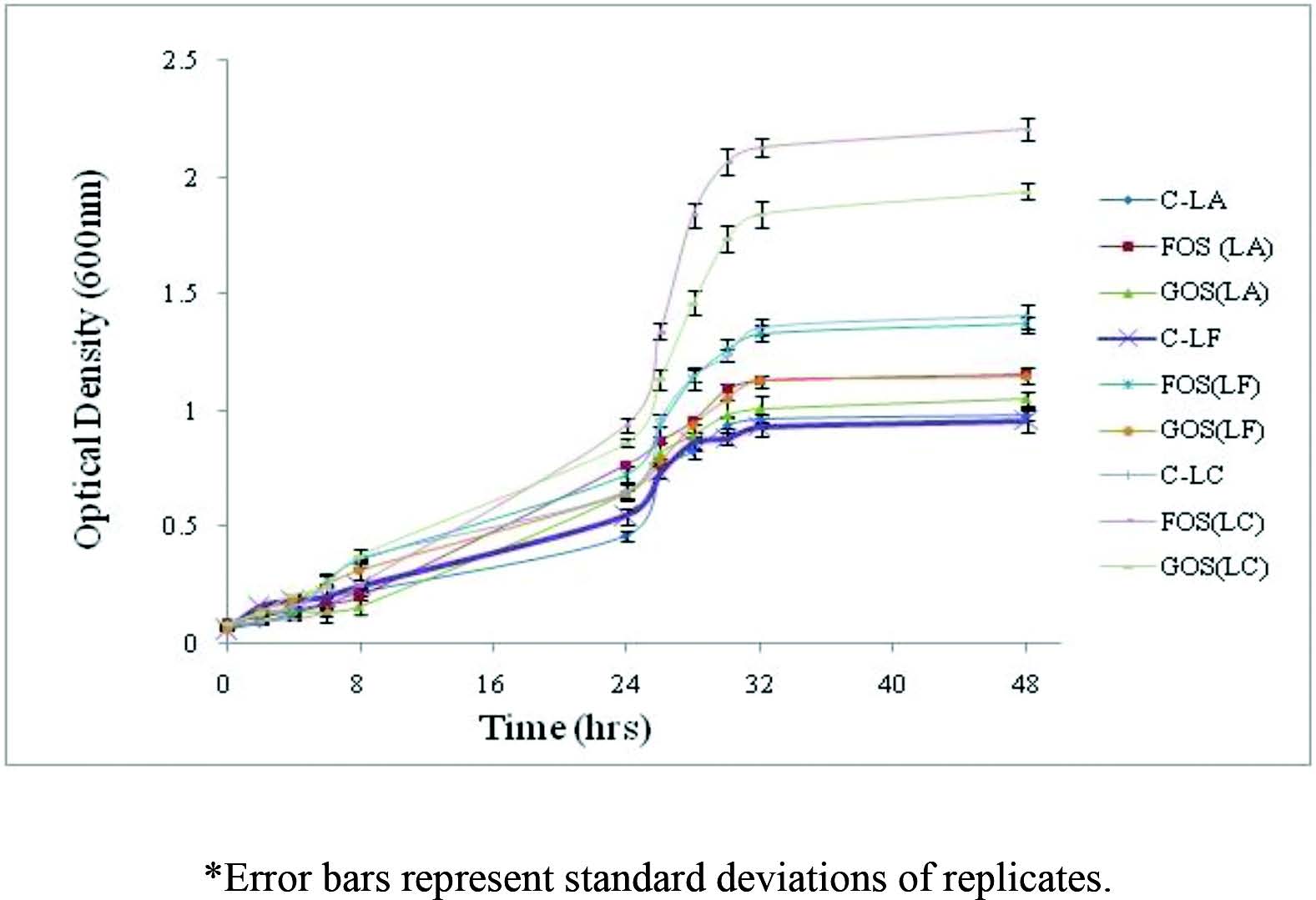 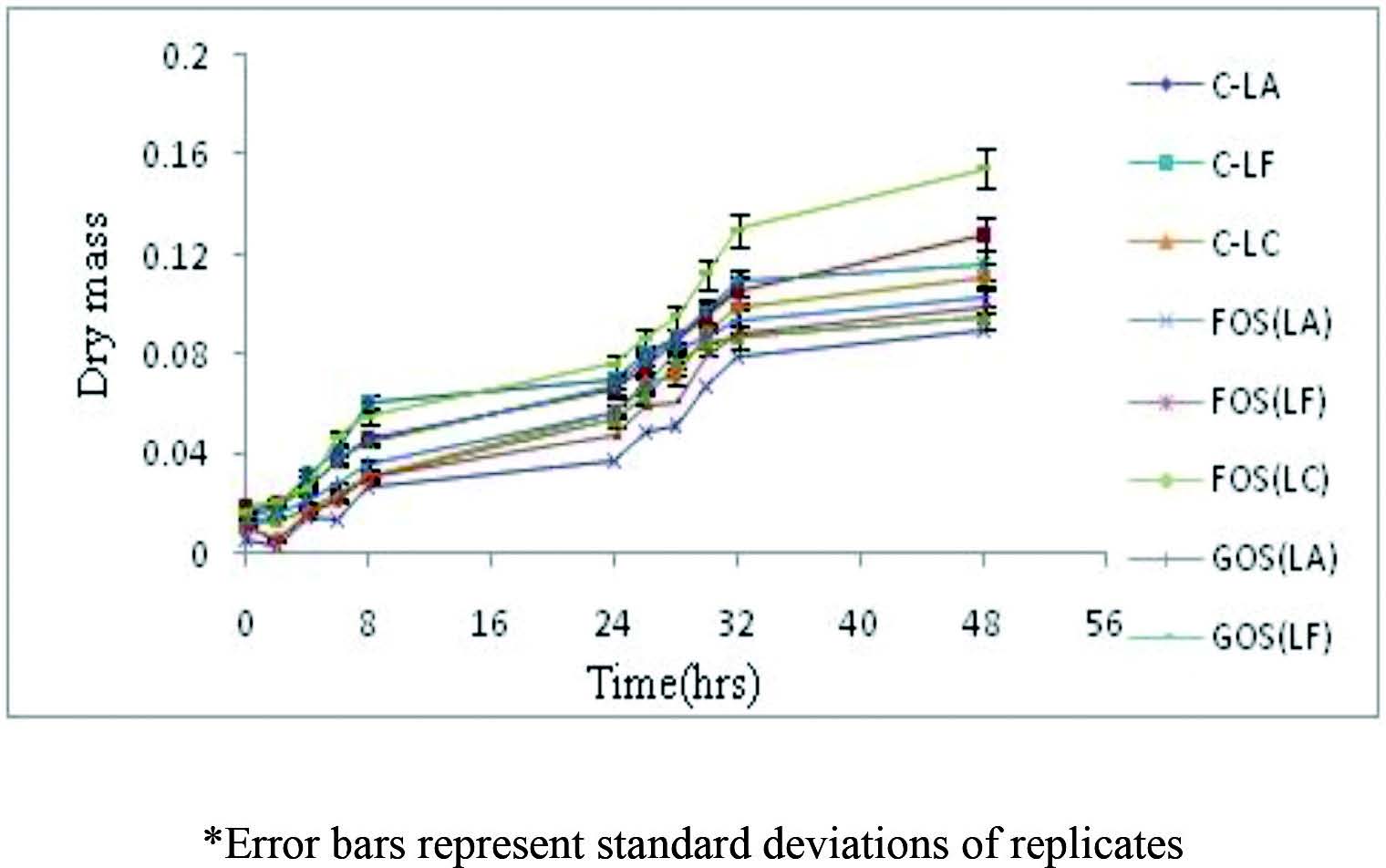 Significant zone of inhibitions were observed against E. coli. Bacteriocin (antimicrobial peptides or proteins) are produced by almost all genera of lactic acid bacteria.26 The FOS and GOS stimulate the growth of Lactobacilli strain and suppress growth of potentially harmful species in the vagina ecosystem. 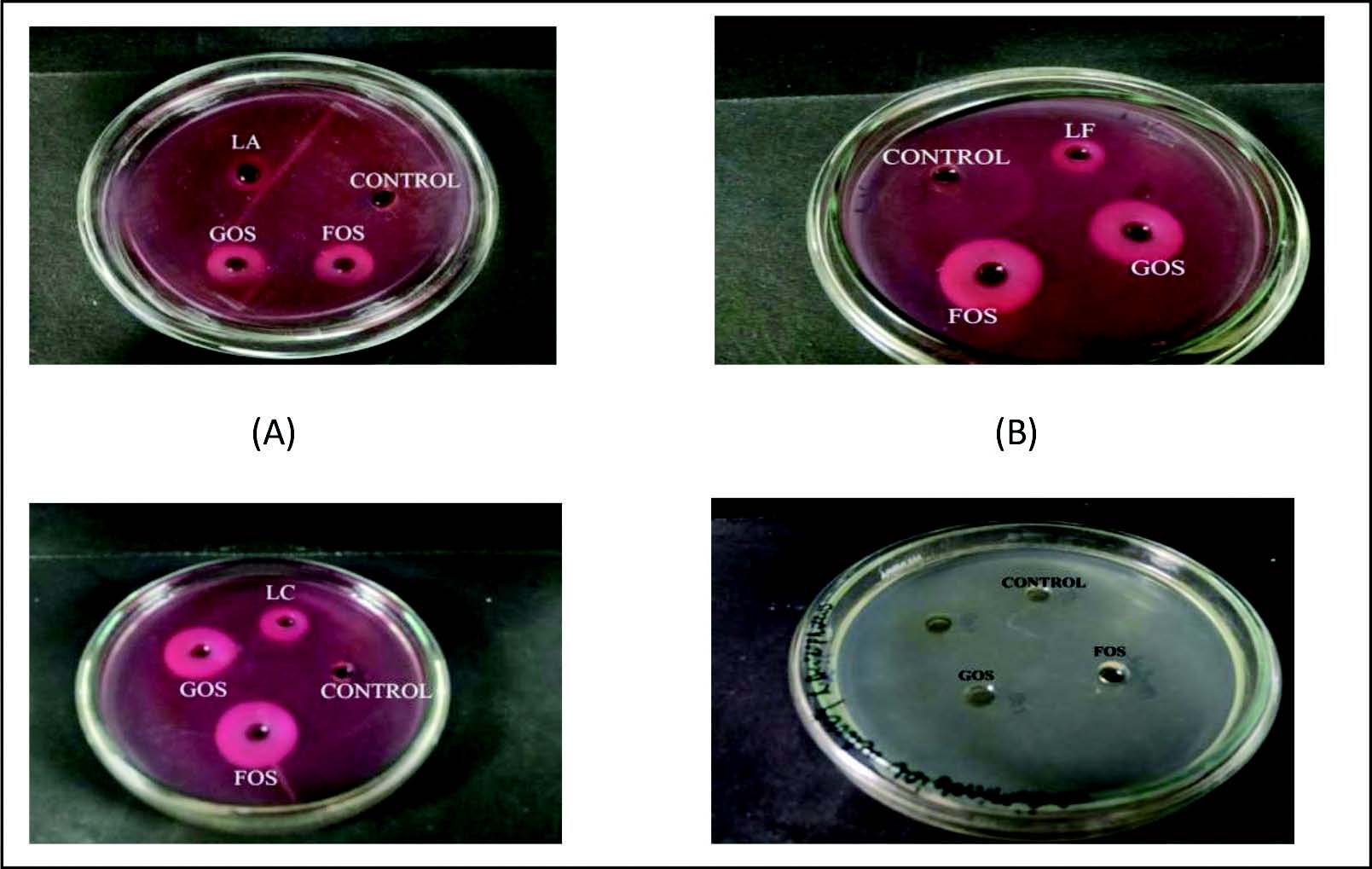 [1] Conflicts of interest CONFLICTING INTEREST The authors are declared no conflict of interest.

Journal:
Journal of Young Pharmacists
‹ Impacts of Nitrogen Starvation on Expression Profiles of Involving Genes in Triacylglycerol Biosynthesis in Chlamydomonas reinhardtii: Towards Microalgal Systems Biotechnology up Enhancement of Percutaneous Delivery of Dapsone by Microemulsion Gel ›