Singh and Avupati: Development and Validation of UV-Spectrophotometric method for the Estimation of Curcumin in Standardised Polyherbal Formulations

We aimed to develop and validate a simple UV-spectrophotometric method relates to the estimation of curcumin in standardised polyherbal formulations.

It was confirmed from the results of method validation characteristics such as specificity, linearity, range, precision, accuracy, and robustness were keeping within the limits of acceptance criteria defined under ICH guidelines, 76.0560% of curcumin was estimated to be present in each Live-well™, CUMIN capsule containing a minimum 95% of the total curcuminoids (label claimed).

In summary, our method was found to be reliable in detecting the unknown percentage of curcumin in Live-well™, CUMIN capsule formulation. Also, the method was proved to be specific, linear, precise, accurate and robust to use for routine analysis of polyherbal formulations containing curcumin as their principal component in the extracts.

In the post genomic era, World Health Organization (WHO) estimated about 80% of the world population uses herbs and other traditional medicines for their primary health care needs.1 Tremendous raise in the use of herbal medicine is leading to a fast-growing market of polyherbal formulations worldwide.2 Whereas, according to WHO guidelines, standardization of herbal products is essential in order to assess the quality, clinical safety and efficacy before releasing into the market.3 Turmeric (Curcuma longa Linn.) is a perennial herb belonging to the family Zingiberaceae also called curcumin.4 The yellow color of turmeric is mainly due to the presence of polyphenolic curcuminoids.5 In commercially marketed curcumin (turmeric extracts), curcumin, available in a mixture of three curcuminoids, usually contains 77% pure curcumin, 17% demethoxycurcumin and 3% bisdemethoxycurcumin.6 It has been reported that different species of Curcuma have different percentages of these individual curcuminoids.7 Among the curcuminoids, curcumin has been attained significant attention due to its bioactive potential.8 Numerous clinical trials over the past two decades have addressed the safety, and efficacy of this nutraceutical against multiple diseases including cancer, diabetes, acquired immunodeficiency syndrome (AIDS) etc.9 Acute toxicity studies have indicated the safety of curcumin at doses as high as 12 g/day over 3 months.10 In complementary and alternative medicine therapies, curcumin has significant role either alone or in combination with other herbs.11 A variety of polyherbal formulations of turmeric extracts have been marketed commercially in which the percentage of curcumin is vital to ensure physiological benefits. Conversely, several marketed polyherbal formulations are available without labeled claim on relative percentage composition of individual curcuminoids.12 Several methods were reported for the estimation of curcumin in different pharmaceutical and herbal formulations by using UV,13 HPLC,14 UPLC,15 HPTLC,16 FT-IR17 and others hyphenated methods.18,19 However, these techniques are not suitable for analyzing compounds in combinations of polyherbal formulations like Ayurvedic or Chinese medicinal products, since they contain more than one herb. While UV-spectrophotometric methods are more suitable for this objective, studies on dedicated UV-spectrophotometric methods to quantify the curcumin in polyherbal formulations are very limited.20 Therefore, in the present study, a simple UV method was developed and validated according to international conference harmonization (ICH) guidelines for the quantitative estimation of curcumin in polyherbal formulations.21 The method has also been tested by using market available Live-well™, CUMIN capsules. Literature survey also revealed that, to date, no UV method has been proposed using ethyl acetate as solvent for the assay of curcumin in polyherbal formulations.

Standard stock solution contain 100 μg/mL was prepared, 10 mg of curcumin was accurately weighed and transferred into 100 mL volumetric flask and made up to the mark with ethyl acetate, standard solutions were prepared in the concentration range of 1-5 μg/mL by further dilution with ethyl acetate.

Determination of wavelength of maximum absorbance (λmax) of curcumin

The absorbances of the standard solutions in ethyl acetate at 1-5 μg/mL range was measured at 418 nm. Standard calibration curve was prepared by plotting average (n=3) maximum absorbance (λmax) versus concentration. Linearity was studied using a regression equation.

Specificity was confirmed by UV-spectrophotometric scanning of each curcumin standard solution (1-5 μg/mL) in the range of 400-600 nm against ethyl acetate as blank.

The data obtained from the linearity and accuracy studies was used to assess the range of the method.

Accuracy was established by percentage recovery of known added concentrations of curcumin standard (1, 2 and 3 μg/mL) to the pre-analyzed sample solutions (2 μg/mL). The method was repeated for three times for each concentration.

Ca is the total curcumin concentration after standard addition;

Ctis the curcumin concentration in the test sample;

Estimation of curcumin in Live-well™, CUMIN

The percentage of curcumin present in the test solution (5 μg/mL) of marketed product Live-well™ CUMIN capsule was estimated by using absorbance ratio method. Maximum absorbance was measured at 418 nm against ethyl acetate as blank.

Statistical analysis was carried out using Graph Pad Prism v 5.0. All the results were expressed as Mean±SD and %RSD.22

Analytical method was developed and validated according to ICH Q2 (R1) guidelines Table 1.

According to ICH Q2 (R1) guidelines, specificity is the ability to assess unequivocally the analyte in the presence of components which may be expected to be present. Results of specificity are shown in Figure 1.

As per ICH Q2 (R1) guidelines, linearity of an analytical procedure is its ability (within a given range) to obtain test results which are directly proportional to the concentration (amount) of analyte in the sample. Results of linearity are shown in Table 2 and Figure 2.

Summary of validation parameters of the proposed UV method

UV spectrum of curcumin in Ethylacetate. 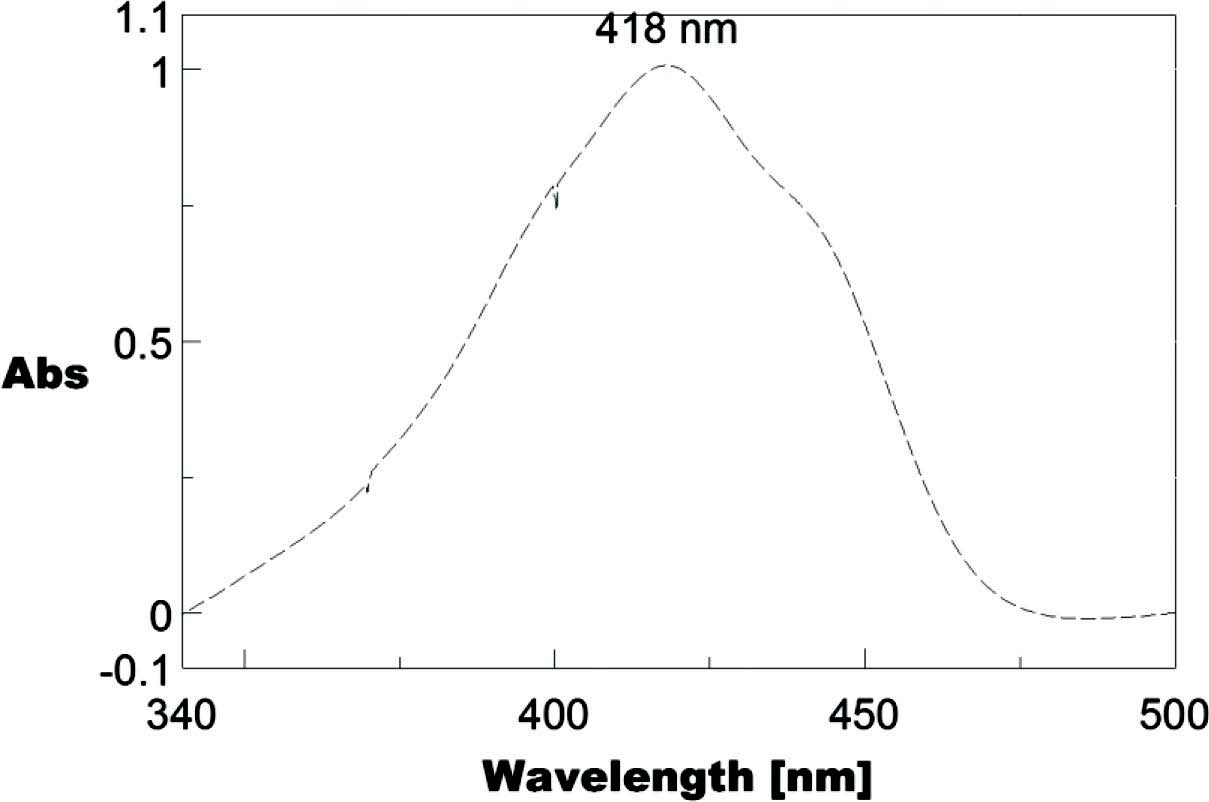 In accordance with ICH Q2 (R1) guidelines, range of an analytical procedure is the interval between the upper and lower concentration (amounts) of analyte in the sample (including these concentrations) for which it has been demonstrated that the analytical procedure has a suitable level of precision, accuracy and linearity. Results of range are shown in Table 2 and Figure 2.

Based on the ICH Q2 (R1) guidelines, precision of an analytical procedure expresses the closeness of agreement (degree of scatter) between a series of measurements obtained from multiple sampling of the same homogeneous sample under the prescribed conditions. Precision may be considered at three levels: repeatability, intermediate precision and reproducibility. Results of precision (repeatability and intermediate precision) are shown in Tables 3 and 4.

Established ICH Q2 (R1) guidelines specified that the accuracy of an analytical procedure expresses the closeness of agreement between the value which is accepted either as a conventional true value or an accepted reference value and the value found. Results of accuracy are shown in Table 5.

In agreement with ICH Q2 (R1) guidelines, the robustness of an analytical procedure is a measure of its capacity to remain unaffected by small, but deliberate variations in method parameters and provides an indication of its reliability during normal usage. Results of robustness are shown in Table 6.

Linearity and range of the proposed UV method

Linearity and range of the proposed UV method. 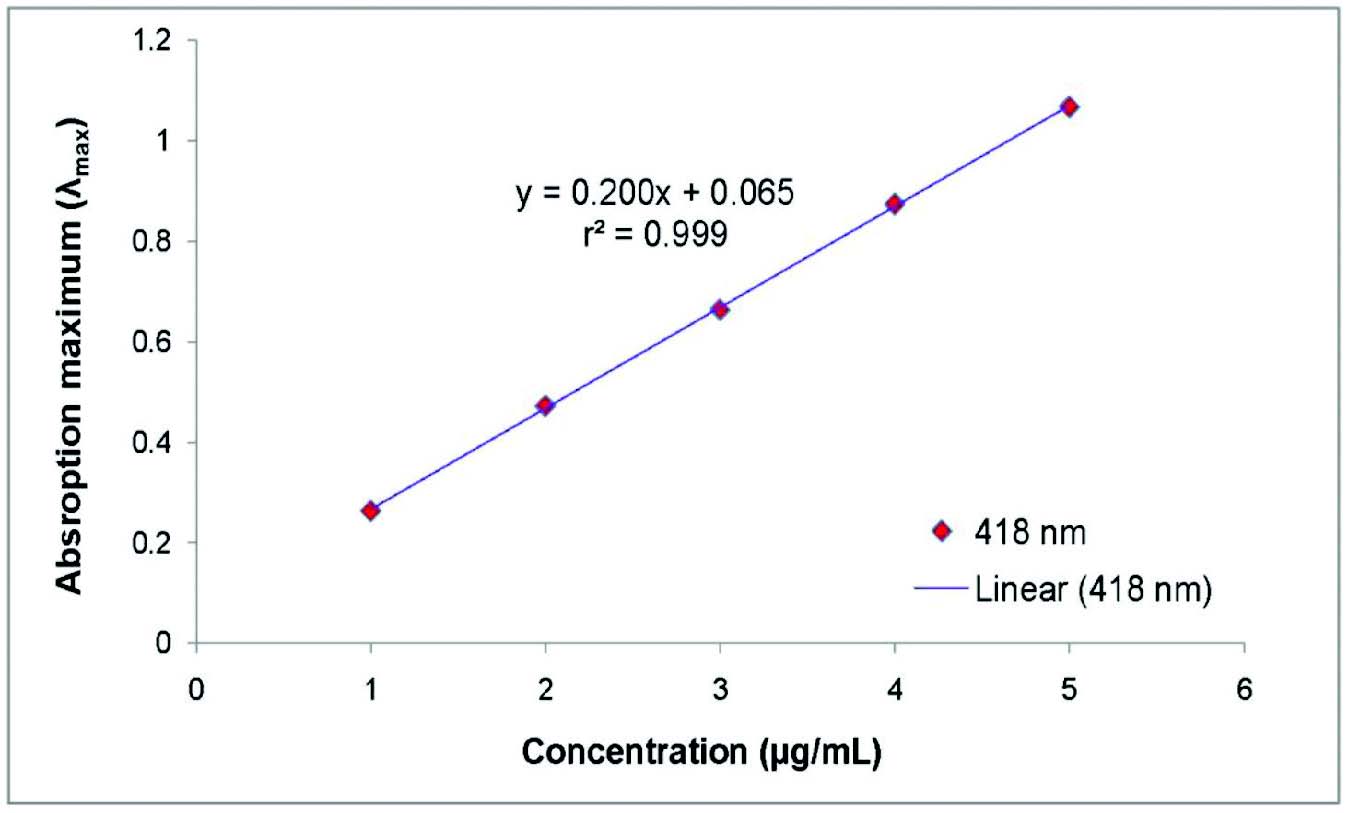 Results of assay of curcumin in polyherbal formulation (Live-well™, CUMIN) capsule formulation is shown in Table 7.

During method development phase, the use of a few milliliters of ethyl acetate as solvent resulted in considerable outcome in UV analysis. Hence, the solvent was optimized to ethyl acetate. The main reason for the selection of ethyl acetate as solvent for developing UV method was based on its biodegradable and ecofriendly (not dangerous for the environment) properties. It is one of the most commonly used solvent in chromatographic separation of curcuminoids. Furthermore, ethyl acetate absorbs in the wavelength range of 200 to 235 nm that does not interfere with the absorption range of curcuminoids at 400-600 nm. The proposed UV-spectrophotometric method was found to be specific and selective for assay of curcumin in polyherbal formulations, the optimized solvent was ethyl acetate and wavelength of maximum absorption (λmax) of curcumin was appeared at 418 nm Figure 1.

Robustness of the proposed UV method

[i] aLabel claim is total percentage of curcuminoids minimum 95%

The method was validated according to ICH guidelines23,24 Table 1. Specificity was confirmed by comparing the UV-scans obtained from the curcumin standard concentrations (1-5 μg/mL), all runs exhibited a prominent peak at 418 nm and it was confirmed as average wavelength of maximum absorbance (λmax). Therefore, it was selected for linearity studies Table 2. The regression plots showed compliance with Beer Lambert’s law in the concentration range of1-5 μg/mL with a correlation coefficient (r) of 0.999 indicate a good linearity between absorbance and concentration Figure 2. Range (working range) was confirmed by the results where UV absorbance was directly proportional to the true concentration of the analyte was predefined by the method of goodness-of-fit test at 418 nm Figure 2. The range of analyte concentrations that the proposed method can directly measure was (1-5 μg/mL) and it was confirmed by accuracy studies as 50 to 150% of the test concentration. The analyte concentration was in the measurable range of the instrument. The repeatability (%RSD) and intermediate precision (%RSD) were observed for analysis of three independent triplicate samples. The repeatability %RSD value was found to be 0.9462% in ethyl acetate Table 3 and the intermediate precision %RSD values for selected samples in three consecutive different days were found to be 0.8693, 0.7500 and 0.7770% in ethyl acetate Table 4, respectively. The low values of %RSD in both intra-day and an inter-day analysis was found to be less than <2%. Hence, the precision was confirmed. The accuracy of the proposed method was established by standard addition method Table 5, estimated by analyzing samples spiked at three different concentrations (low, medium, high) covering the working range (1-5 μg/mL). The data revealed the closeness of the observed value to the true value for the sample. Accuracy was assessed as the % recovery of the added curcumin concentrations. Recovery values for the standard addition method followed for the curcumin analysis ranged from 98.4100 to 101.000% ensure an accurate method as well as non-interference with the excipient of formulation Table 5. The method was found to be robust as indicated by reliable and consistent absorbance with changes made with respect to the analyst (analyst 1 and 2) and instrument (UV-Jasco V-630 and UV-Secom am XTD6), triplicate determination at selected concentration (1 μg/mL) of the curcumin was carried out and the %RSD values in both the parameters were appeared to be <2% and the percentage recovery was appeared in the range 99.79 to 101.27% Table 6. Hence robustness was established

The method was successfully employed for the estimation of curcumin in Live-well™, CUMIN capsule formulation and the percentage curcumin was determined and it was found to be 76.0560% with %RSD value 0.2755% Table 7. The percentage curcumin estimated by the proposed method was in good agreement with natural composition ratio of curcumin found in turmeric extracts25 (curcumin 76%, demethoxycurcumin 19% and bisdemethoxycurcumin 5%) used in clinical trials.26-28

In conclusion, we have developed and validated a method that was found to be eco-friendly, simple, cost-effective and was successfully applied for the estimation of curcumin in Live-well™, CUMIN capsules without involvement of any interference from other phytochemicals forming part of the formulation ingredients. Based on the results and statistical parameters demonstrate that this method could be the specific and remarkable for the analysis of curcumin in polyherbal formulations or turmeric extracts.

One of the authors (Ashwinder Singh A/L Guru dev Singh) is thankful to the Dean, Faculty of Pharmacy and to the Vice-chancellor, Asia Metropolitan University, Malaysia for providing Bachelor of Pharmacy (Hons) Graduate Research Grant, instrumentation facilities to carry out the research work.

Duraiswamy A, Shanmugasundaram D, Sheela C , authors. Evaluation of the phytochemical constituents in ADJ6, an anti-diabetic polyherbal formulation by GC-MS. Journal of Pharmacognosy and Phytochemistry. 2016;5(1):173–1

Mohanty C, Sahoo SK , authors. The in vitro stability and in vivo pharmacokinetics of curcumin prepared as an aqueous nanoparticulate formulation. Biomaterials. 2010;31(25):6597–611