To compare the molecular activity of curcumin and resveratrol on selected breast cancer protein receptors and to investigate their combination for synergism against human breast cancer MCF-7 cell line.

Curcumin and resveratrol were subjected to insilico docking studies using glide to investigate the drug activity against HER2, human oestrogen receptor, ERBB2, epidermal growth factor tyrosine protein kinase C-SRC, and HSP90 proteins. MTT assay was used to assess cell viability of curcumin and resveratrol individually and in combination at 1:1,1:3 and 3:1 ratio respectively.

Cancer is a disease with abnormal cell growth and uncontrolled multiplication of the cells within the body. Cancer therapy is currently modelled by surgery, radiotherapy and chemotherapy. Most cancers are treated with chemotherapy. Drugs from herbal sources are less toxic, less expensive and easily available. Curcumin is a polyphenol obtained from Curcuma longa plant. It is nontoxic and reported for analgesic, anti-inflammatory, and anti-oxidant activity.1 It is a potent anticancer agent with various mechanisms, including inhibition of proliferation of cancer cells, transformation of normal cells, inhibit the synthesis of protein responsible for tumor growth, etc. Resveratrol is a natural drug found in red wine and grape skins possessing high antioxidant property and promising candidate for antimicrobial, anti-inflammatory and anticancer activity.2

Curcumin was reported to downregulate human epidermal growth factor(HER2) oncoprotein overexpressed in 20-30% of breast cancers.13 It inhibits the expression of ER downstream genes and exhibits oestrogen dependent antiproliferation.14 Activity of ERK1/K2 MAP kinase is down regulated by curcumin in a dose dependent manner in breast cancer cells expressing ERBB2.15 It is a potent and selective inhibitor of phosphorylase Kinase including tyrosine kinase C-SRC.16 Resveratrol inhibits PI3K/AKT pathway responsible for the oncogenic driver in breast cancer.17 It causes cell death by altering the progression of cell cycle through fatty acid synthase inhibition in breast cancer with HER2 positive. Resveratrol acts as an antioestrogen to reduce migration and invasion of cancer cells.18 Resveratrol is reported to down regulate the activity of MAPK pathways by inhibiting protein tyrosine kinases.19

Based on the mechanisms of curcumin and resveratrol against cancer cells, breast cancer protein HER2, human oestrogen receptor, epidermal growth factor tyrosine kinase receptor ERBB2, tyrosine protein kinase C-SRC and HSP90 were selected to study the molecular activity and compare the binding interaction of curcumin and resveratrol. Among the various computational methods employed to assess the anticancer potential of drugs, docking is the most widely used tool.20 Hence insilico molecular docking analysis were performed on the selected cancer receptors for curcumin and resveratrol. With the interaction study results against these proteins, inhibition of cell growth by curcumin, resveratrol individually and in combination against MCF-7 cells were examined to study the synergistic effect on cytotoxicity.

The protein data bank (PDB) web contains a collection of 3D structure of large biological molecules including proteins and nucleic acids. The structure of HER2, Human Oestrogen receptor, ERBB2 receptor tyrosine kinase, Tyrosine protein kinase C-SRC and HSP90 proteins having PDB ID 4RJ3, 2IOK, 2A91, 2SRC and 2VCJ with resolution of 1.63 A°, 2.4 A°, 2.5A°, 1.5A° and 2.5A° respectively was retrieved from the protein data bank http://www.rcsb.org/pdb/. All the interacting heavy atoms, water molecules, metal ions are removed and added with hydrogen atoms, stabilized with minimized energy using “protein preparation wizard” of Schrodinger Maestro. The modelled structures of proteins were validated through Ramachandran plot using PROCHECK.

Drug compounds curcumin and resveratrol were obtained from the PubChem website https://pubchem.ncbi.nlm.nih.gov/ as SDF format and then converted and optimized to ligands using “ligprep” of Schrodinger Maestro version 10.6.014.

The compounds prepared as ligands were docked against each of the prepared protein receptors using “ligand docking” of Schrodinger Maestro. Docking analysis was performed at extra precision mode with ligands made flexible. The interactions were calculated using the glide score, which was generated by the best fit of the ligand and the receptor. The ligands docked using GLIDE-Version 7.1 was graded with glide score and glide energy. The docking result for each ligand screened against each receptor protein were recorded.

Curcumin was purchased from Hi Media and resveratrol was obtained as a gift sample from Sami Labs limited, Bangalore. Other chemicals used were of analytical grade.

Sample containing curcumin, resveratrol, curcumin and resveratrol at the ratio of 1:1, 1:3, 3:1 by mass were used for the study. Stock solution of 1 mg/ml was prepared for each sample. 500 µl of each stock solution was then serial diluted to obtain different concentration ranging from 250µg/ml to 3.906 µg/ml.

Cell viability was measured using MTT (3-(4,5 dimethyl thazole-2yl)-2,5-diphenyl tetrazolium bromide) method.21 The cell count was adjusted to 1.0x105 cells/ml using DMEM medium containing 10% FBS. 100µl of the diluted cell suspension (approximately 10,000 cells/well) was added to each well of a 96 well microtiter plate. After 24 h, the supernatant was removed and the monolayer was washed with medium. 100 µl of samples of different concentrations prepared in the media were added. The plates were incubated for 72 h at 37°C in 5% CO2 atmosphere. After 72 h, the sample solutions in the wells were discarded and 20 µl of MTT (2mg/ml) in MEM-PR (MEM without phenol red) was added to each well.

Concentration of different test samples required to inhibit cell growth by 50% values was generated from the dose-response curves for each cell line. The data were analysed by CompuSyn software to compute the combination index (CI) values, where the CI value < 1, = 1, and > 1 refer to synergetic, additive, and antagonistic effects, respectively.22

All the statistical analysis was carried out by GraphPad Prism 7.0. All the data were expressed as mean±SD of three independent experiments. One-way ANOVA was used to analyse all experimental data. Statistical significance was accepted at the level of p<0.05. 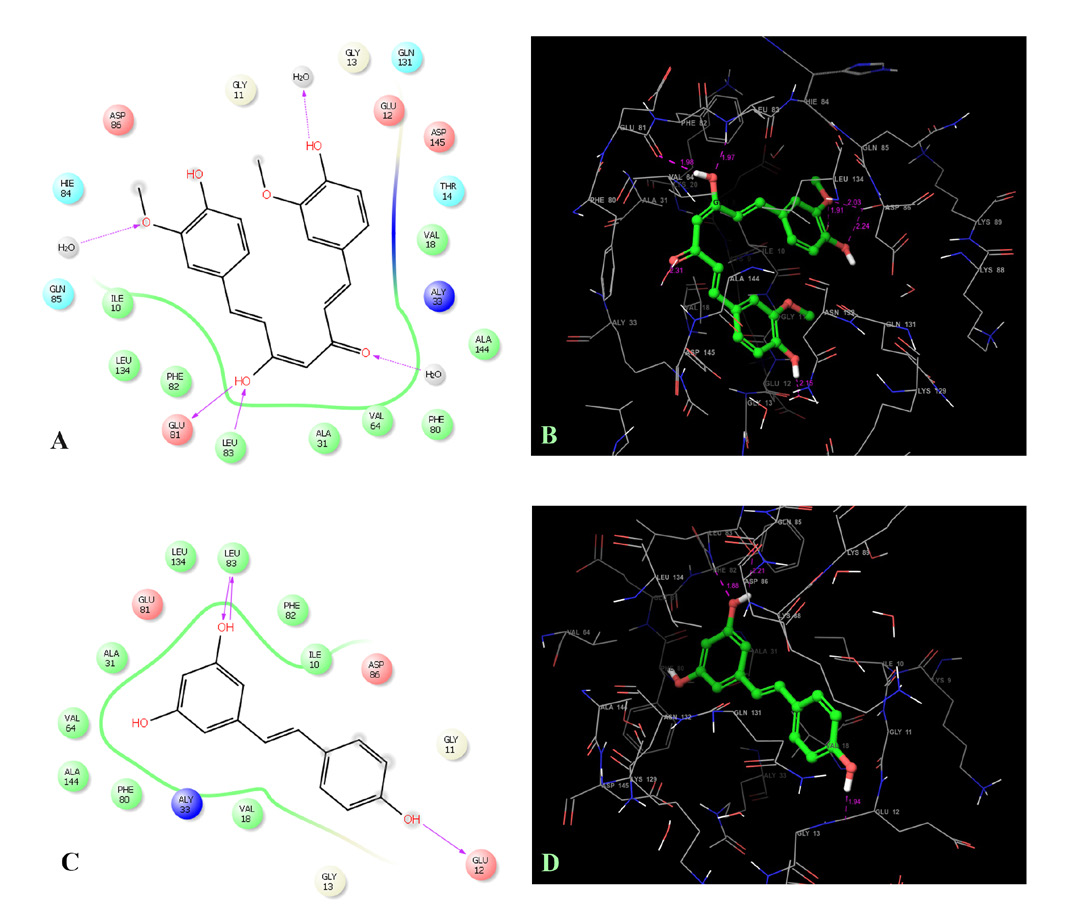 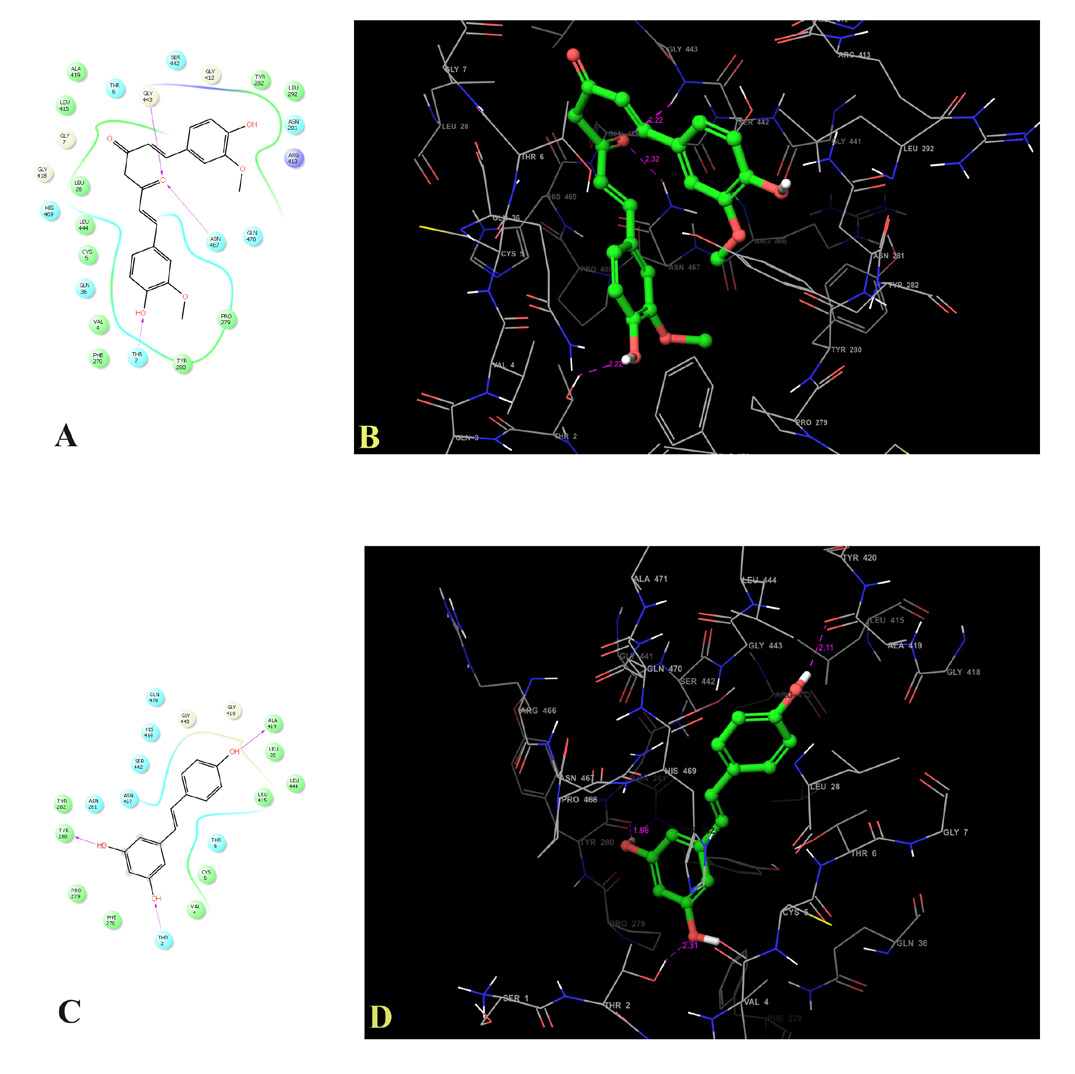 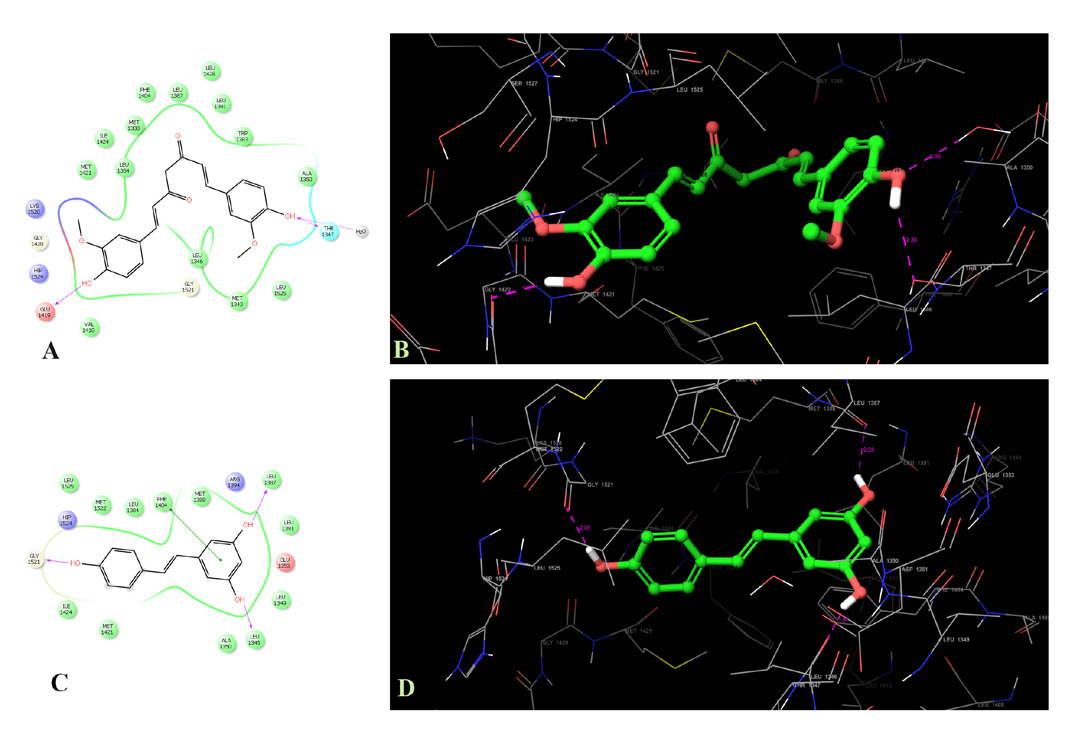 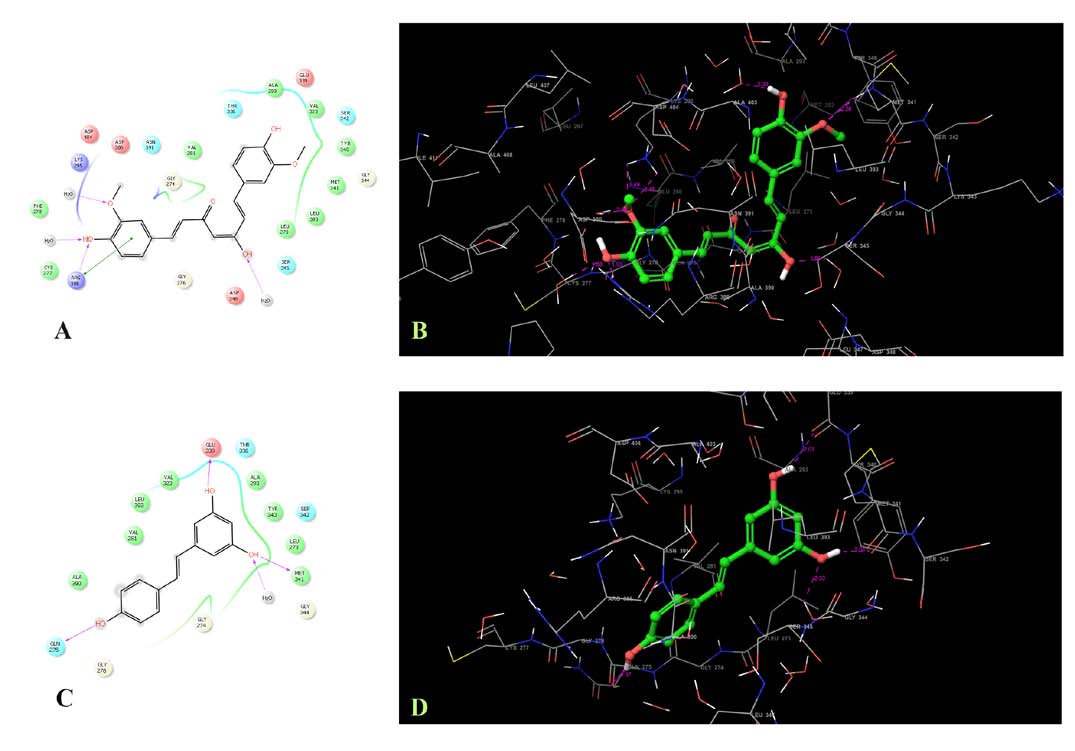 2D and 3D interaction of curcumin and resveratrol against HSB90 (PDB ID 2VJC). 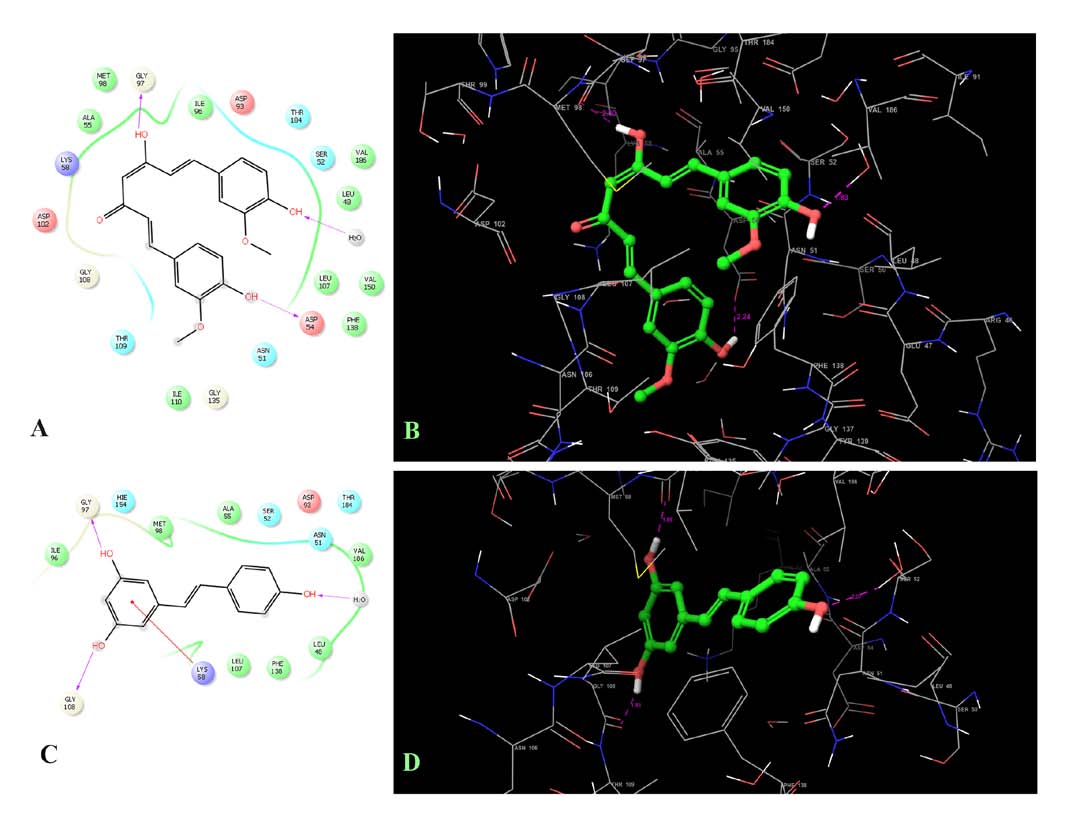 MTT assay resulted in cell cytotoxicity in a concentration dependent manner for curcumin and resveratrol. Combined treatment of curcumin and resveratrol significantly increased the cytotoxicity effect on human breast cancer cells (P<0.05) when compared with the either drugs alone. Combined treatment of curcumin with resveratrol at 1:1 decreased the IC50 value to 28.06 µg/ml comparatively with resveratrol (38.30 µg/ml) but increased comparatively with curcumin alone treatment (21.29µg/ml). Alternatively, treatment with 1:3 and 3:1 combination ratio enhanced the growth inhibition significantly as indicated by markedly decreased value of IC50 to 15.20 µg/ml and 8.29 µg/ml respectively. The CI analysis results suggest that the growth inhibitory effect of these two drugs was additive at 1:1 ratio (CI=1.08), while strongly synergistic at 1:3 and 3:1 ratio with CI value of 0.382 and 0.341 respectively.

Results of Docking analysis of curcumin and resveratrol against different cancer proteins.

IC50 of curcumin, resveratrol and their combination with Combination Index. 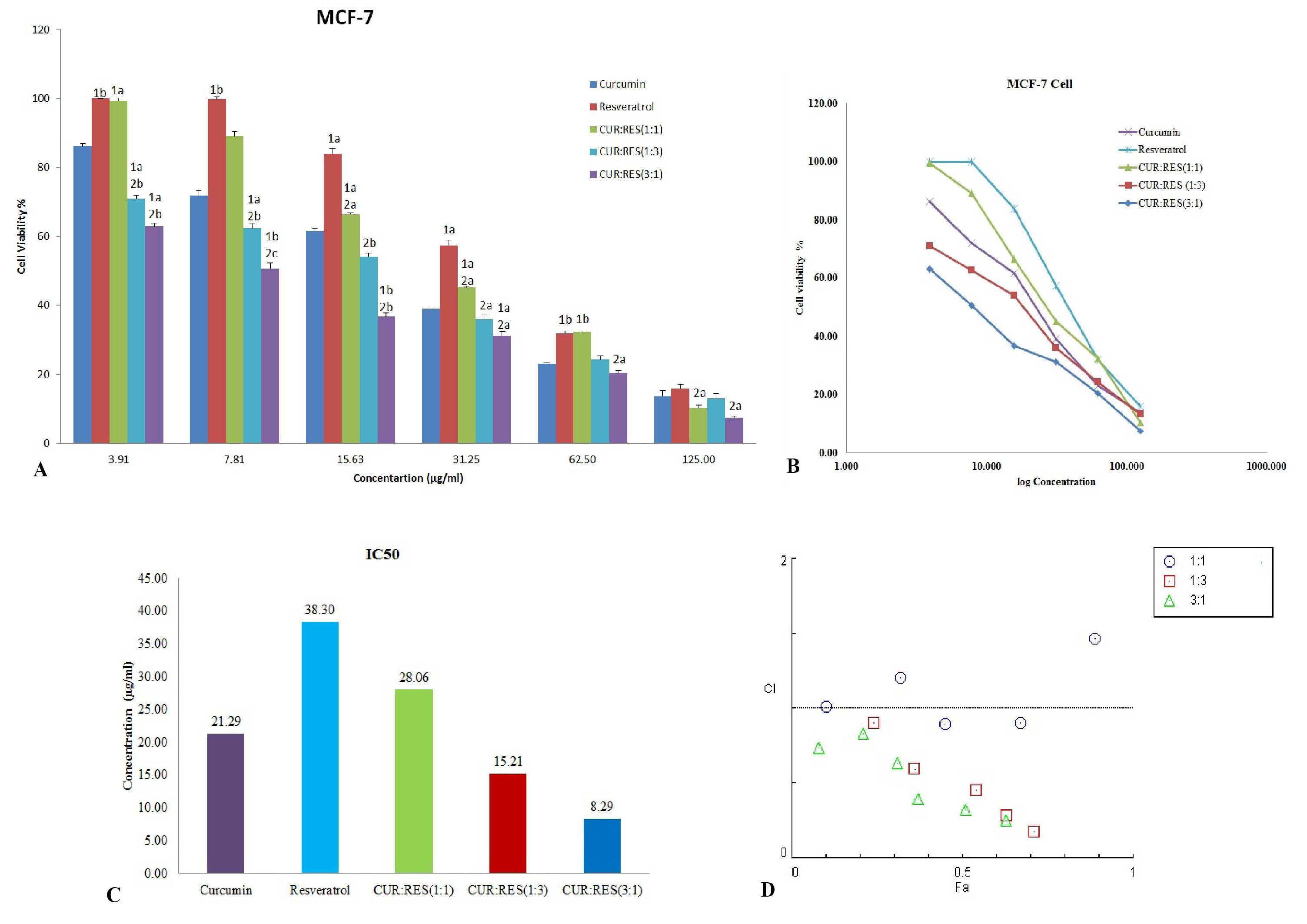 Comparative molecular docking analysis of curcumin and resveratrol against various breast cancer protein receptors helped to explore their drug combination for breast anticancer activity. More negative glide score and energy results indicate more binding for breast cancer proteins by these drugs with varying amino acid interaction sites. Results of cell line study have shown that the combination of curcumin with resveratrol additively or synergistically increase the anticancer activity of either drug. Synergistic effect of drug combination against MCF-7 cells indicates that this drug combination could be a promising approach for breast cancer treatment and chemoprevention. To gain more confirmation in vivo studies must be further investigated. However the common problem with both the drugs is their poor solubility and low absorption resulting in poor bioavailability.24,25 Among the various techniques reported to overcome these limitations, Nano delivery is a promising approach.26-29 Delivering drug combination chemotherapeutics in nanocarrier base proves promising in advanced therapeutic approach on cancer cells by the enhanced pharmacokinetics of drugs, reduced drug-drug interaction and tailored drug release.30 Studies on combination drug delivery of curcumin and resveratrol using cyclodextrin based nanocarrier are in progress.

Aftab N, Vieira A , authors. Antioxidant activities of curcumin and combinations of this curcuminoid with other phytochemicals. Phyto therapy Research. 2010;24(4):500–2