The Box-Behnken design on four factors with response surface methodology were used to optimize extraction conditions for trans-resveratrol content from Melinjo seeds. For further, the various salt was applied to separate of the trans-resveratrol form ionic liquid and facilitate for extraction back using an organic solvent.

The optimum process for the ionic liquid-based microwave assisted extraction was below: [Bmim]Br concentration 2.5 mol/L; liquid-melinjo seeds powder ratio 15 mL/g; microwave power 10%; and extraction time 10 min. Under optimized conditions, the trans-resveratrol value was 1.34 mg/g. Moreover, the salt Na2CO3 0.01 mol/L with ethyl acetate were useful to the extraction back of trans-resveratrol from [Bmim]Br solution.

This IL-MAE method was suitable to apply as an alternative technique to extract the active compound from the plant.

Melinjo (Gnetum gnemon L.) is widely cultivated in Southeast Asia. In Indonesia, melinjo is very popular as a vegetable for consumed in soup or cracker snack (locally was known Emping). The seeds, fruits, and leaves are nutritious. Melinjo seeds are rich in resveratrol dimer derivatives (Gnetin C and its glucosides, Gnetin L) and resveratrol monomer derivatives (isorhapontigenin, trans-resveratrol (3,5,4-trihydroxy-trans-stilbene), and trans-pieced).1,2 Trans-resveratrol is a polyphenolic compound (a group of stilbenes). Melinjo seeds contain trans-resveratrol reported to have multiple pharmacological effects, such as antioxidant,3 lower uric acid,4 tyrosinase inhibitor,5 antitumor, lipase and α-amylase inhibitor, antibacterial, and immunomodulator.6,7

Microwave-Assisted Extraction (MAE) is a modern extraction technique that widely applied to extract bioactive compounds from the plant, such as alkaloids, phenolic, and essential oil. MAE is easy to use, rapid, efficient, effective, good selectivity, and economic expense. Conventional methods of extraction were used organic solvents, that has a problem when applied for extraction because of volatility, flammability, and toxicity.8,9

IL has good extractability for the various active compounds, such as from Peperomia pellucida,11 Dioscorea nipponicae,12 Psidium guajava, Smilax china,13 Curcuma longa,14 Apocynum venetum,15 and Lycium ruthenicum.16 The IL 1-n-butyl-3-methylimidazolium ([Bmim]Br) solution was well known to extract trans-resveratrol from Polygoni cuspidatum.17 Moreover, the aqueous biphasic system (ABS) based on ionic liquid has been developed to separate the active compound from the water-miscible ionic liquid solvent. Thus, the ionic liquid can be recycled and reused.18

Mature melinjo fruits (Figure 1) were purchased from local market. The seeds (Figure 1c) were separated from their shell and dried. The dried seeds were ground to fine flour by using a commercial kitchen blender. The powder seed samples were stored in air tight container and refrigerated at 4°C. Standard trans-resveratrol was purchased from Sigma-Aldrich Pte. Ltd., (Singapore). Ionic liquid 1-butyl-3-methylimidazolium bromide ([Bmim]Br) (>99%) was bought from Chengjie Chemical Co., Ltd., (Shanghai, China). The salt Na2CO3, KH2PO4, NaCl, K2HPO4 were purchased from Merck. All reagents used for TLC analysis were analytical grade and purchased from a local distributor.

Extraction of trans-resveratrol from melinjo seeds

One gram sample melinjo seeds powder was placed in a boiling flask. IL solution with different concentration was added into the flask to a certain liquid/solid ratio. The boiling flask was placed into a microwave. The extraction was performed under different power level and time. The extracts were centrifuged at 3000r/min for 15 minutes, and then the supernatant was diluted to 10 mL with aquabidestilata for analysis.

The trans-resveratrol in the extract was determined semiquantitatively by thin layer chromatography (TLC)-densitometry. The 0.5 ml ethyl acetate was added to 1 ml of diluted supernatant, and then the mixture was a vortex for few second and will be formed into two phase. The samples (ethyl acetate phase) were spotted on a TLC silica gel aluminum plates 60 F254 (20x10 cm) using microcapillary tube 5 μL. The mobile phase consisted of n-hexane: ethyl acetate: acetic acid (1: 1: 0.01). The length of chromatogram run was 8 cm through glass chamber that saturated by the mobile phase. Subsequently, TLC plate was air dried. The scanning was performed with Camag TLC Scanner III in absorbance length at 313 nm and operated by winCATS software. The spot of trans-resveratrol in a sample was confirmed by comparing the spectrum and the Rf value of the spot of the standard.

Standard solutions were prepared by diluting the stock solution of trans-resveratrol (100 mg/L) with ethyl acetate in the concentration range 20–80 mg/L.

Ethanol-MAE was chosen as the reference extraction process. Ethanol-MAE compared with IL-MAE to investigate their efficiency for extraction of trans-resveratrol. One g melinjo seeds powder was extracted with 10 mL of 90% ethanol at 30% power of microwave and 5 min extraction time. The extract was filtered through filter paper, and the filtrate analyzed by TLC-densitometry. The experiment for IL-MAE was operated under 2.5 mol/L [Bmim]Br solution and liquid/solid ratio 15 mL/g at the same power of microwave and extraction time.

The model fitting and statictical analysis

The ANOVA showed that the model F-value of 5.14 and the p-value was 0.0066, implied the model was significant (p<0.05) and acceptable. Furthermore, the terms A and B, two interaction terms (AB), and quadratic terms (A2) were significant models terms. The R-squared (R2) was 0.8781, which implied that 87.81% of the variations could be explained by this model.

The 3D response surfaces for the interaction between two independent variables and response showed in Figure 3. Figure 3a, b, and c demonstrated relationship IL concentration and liquid/solid ratio, power, and time, respectively, which not showed the good result. Figure 3d and e showed that between solid/liquid ratio with power and time did not have influence toward trans-resveratrol, which was similar to the power and time in Figure 3f. So, in general, the graphic indicated that the relationship between two independent variables of the response not strong enough.

The 25 runs of four different experimental conditions were studied and the result for trans-resveratrol yield was shown in Table 2. The highest trans-resveratrol content was shown in run 14 with 2.5 M [Bmim]Br solution, 15 mL/g liquid/solid ratio, 10% microwave power, and 10 min extraction time. The experiment value was 1.34 mg/g, that close with the predicted value by Design Expert software, 1.10 mg/g, even slightly higher. The run 3 also showed the high value of trans-resveratrol, 1.32 mg/g, with the predicted value was 1.16 mg/g. Overall, the result showed that the model can be able to describe the expected optimization results. 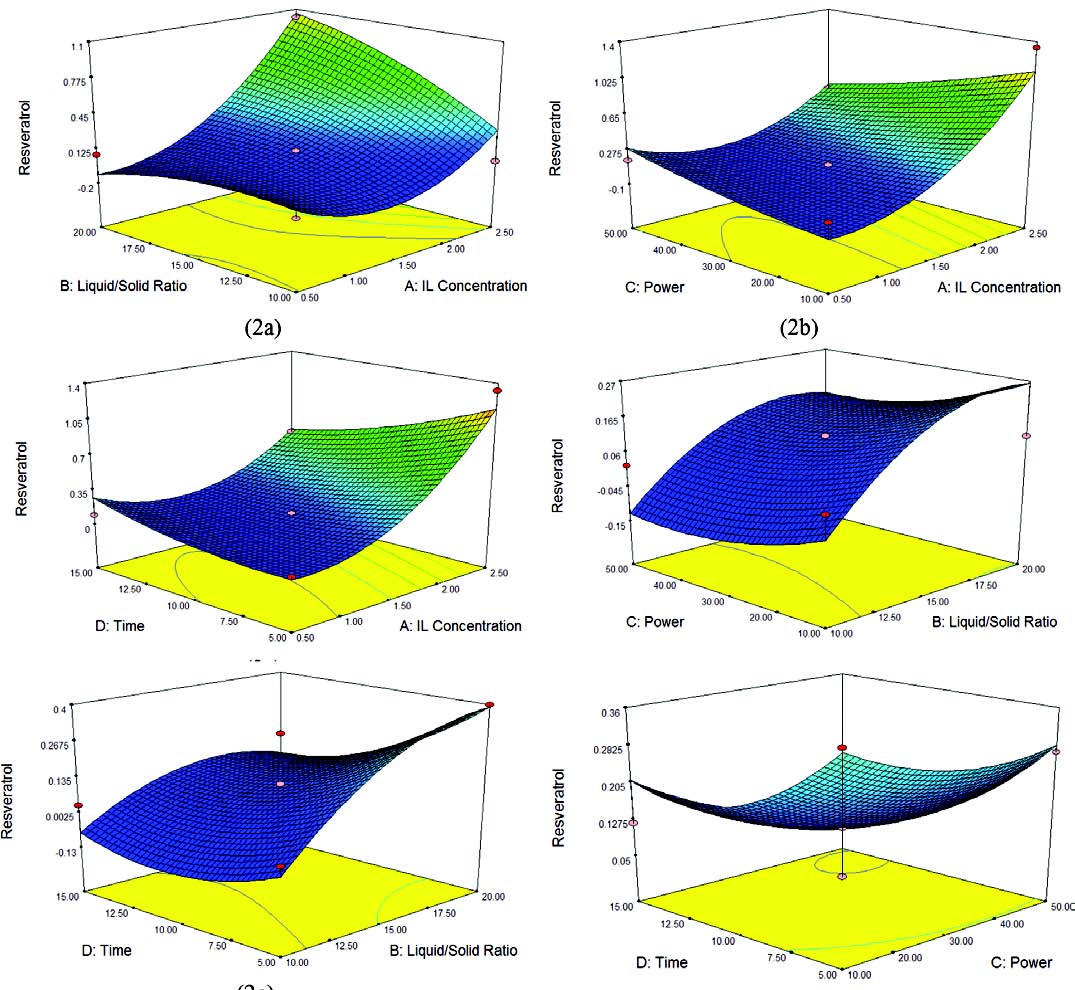 Comparison of organic solvent for extraction

Separation of trans-resveratrol from ionic liquid 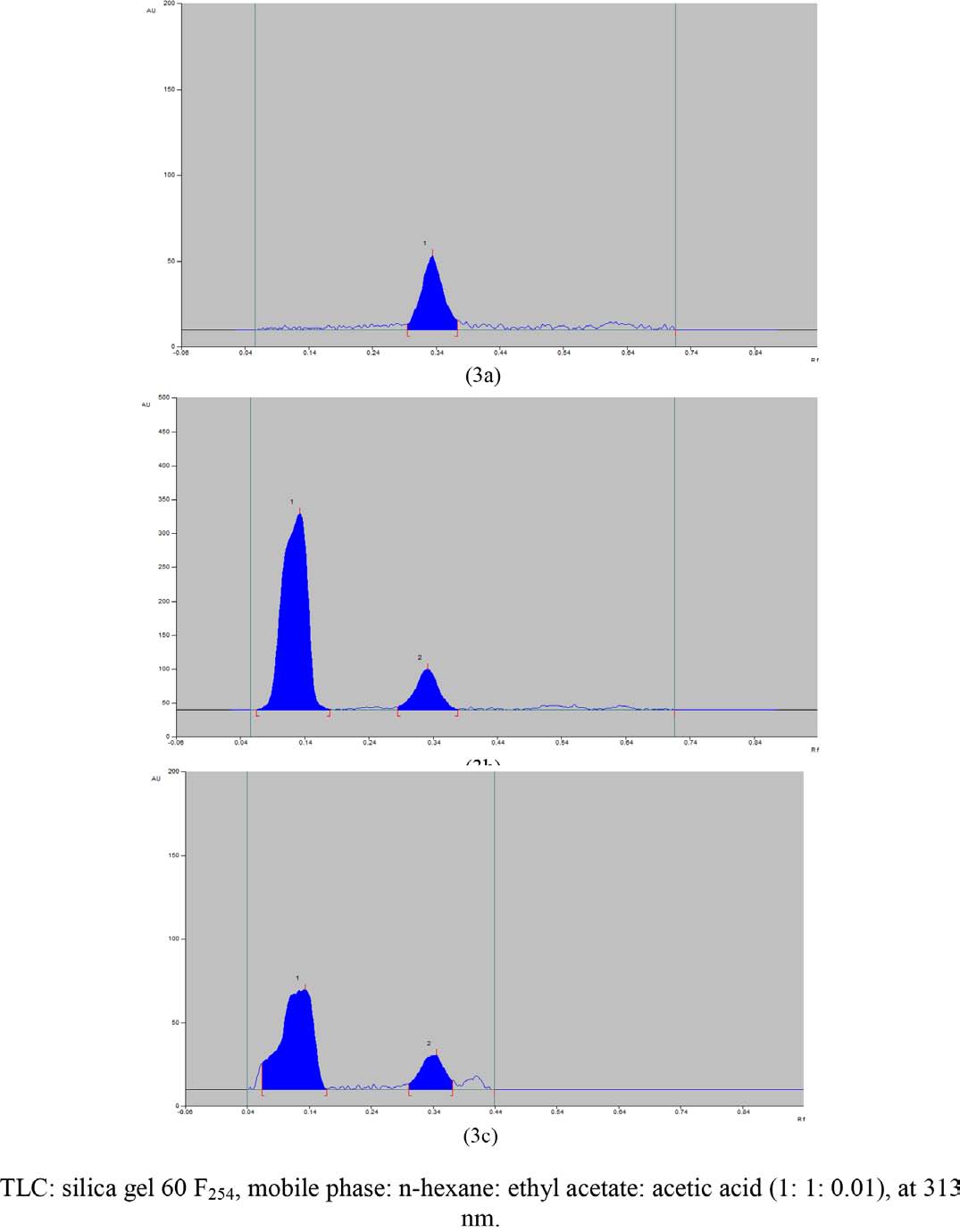 The [Bmim]Br was hydrophilic ionic liquid, which had a strong interaction with trans-resveratrol. The trans-resveratrol is a nonpolar compound that insoluble in water, but IL solution would be lower the surface tension of water and make it easier to penetrate the membrane to extract these compound. Therefore, the [Bmim]Br had good extraction efficiency to obtain trans-resveratrol. The alkalinity level of cation (1-butyl-3-methylimidazolium) influenced by anion that binds through hydrogen bonds. Anion bromide (Br-) can make the ionic solution slightly acidity than another anion. The weak acid ionic solution gives an advantage for extract trans-resveratrol.17 The efficiency of extraction also influenced by long-chain alkyl cations.14

The higher microwave power may be effective to extract compounds from plant materials using MAE in a short time. MAE directly heat solvent and sample, thus resulted in rupture of the cell membrane and release intracellular product into the solvent without damage. The longer extraction time with a high power can cause damage to the active compound because of the heat, that might result in the isomerization of trans-resveratrol in the extract.25 Accordingly, the optimum power and extraction time in this study was 10% and 10 minutes.

Effect of trans-resveratrol using various salt with ethyl acetate for back extraction. 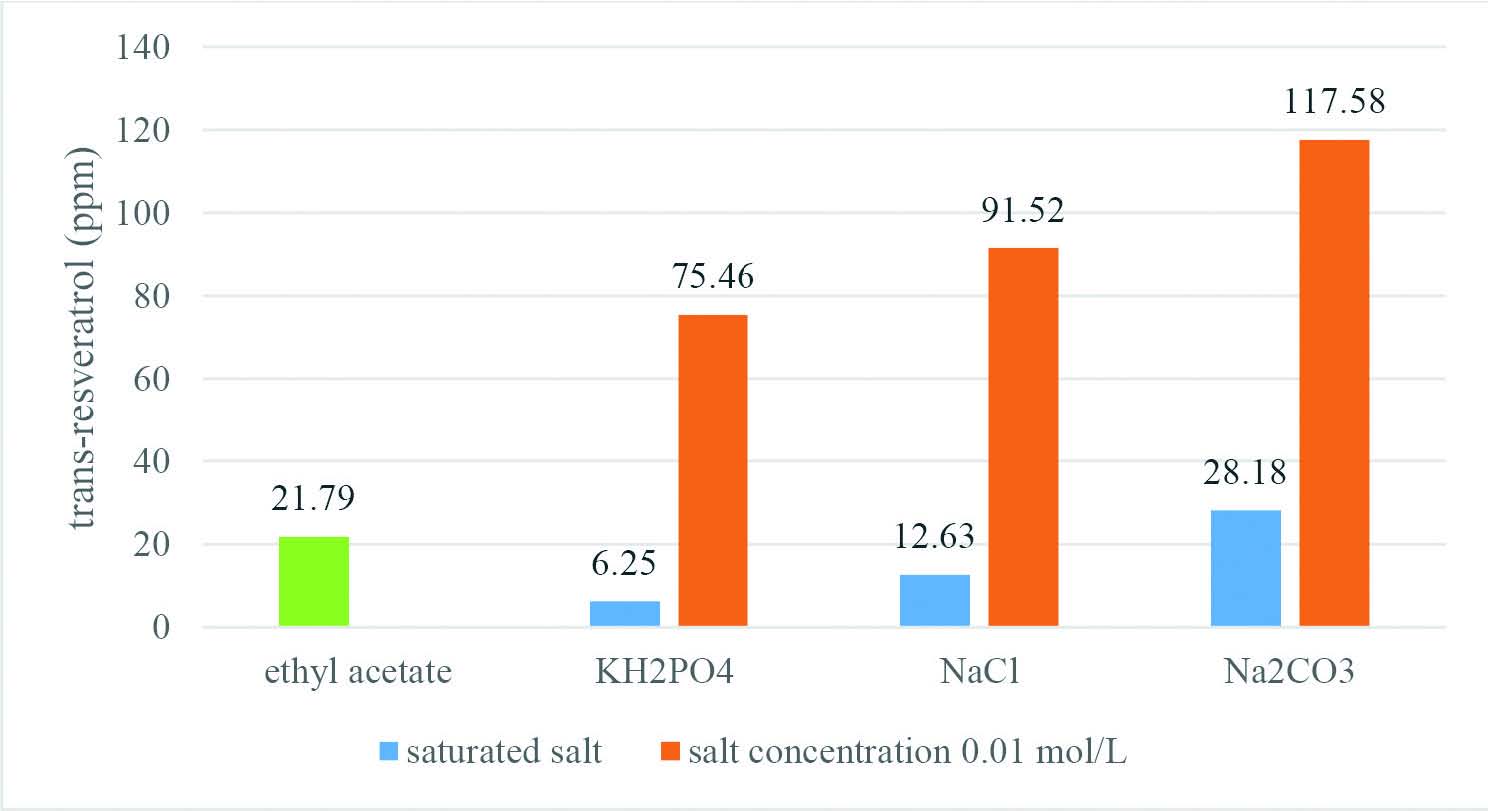 One of the methods for separated active compound and recycling of ionic liquid was induced phase separation with the salting-out process. IL aqueous solution with the addition of cosmotropic salt can form aqueous biphasic systems (ABS) that induce the phase separation, that is ionic phase and salt phase. Organic solvent extraction methods also can perform to extract various compounds from IL.10 In the experimental, the Na2CO3 can not form ABS with aqueous [Bmim]Br solution. But, the salt would help to precipitate residue in the IL solution, which makes trans-resveratrol more easy to migration into an organic solvent (liquid-liquid back extraction).

This work was financially supported by Directorate Research and Community Engagement, Universitas Indonesia via Hibah PITTA 2016.

[6] Conflicts of interest CONFLICT OF INTEREST The authors have no conflict of interest to declare.

Journal:
Journal of Young Pharmacists
‹ Dental Management of the Cardiovascular Compromised Patient: A Clinical Approach up The Antifungal Effect of some 4-Chloro-6-Methoxy-N, N-Dimethylpyrimidin-2-Amine Derivatives Containing a Heterocyclic Compound on the Important types of Fungi ›