Simple and economical area under curve method was developed and validated for the estimation of Eletriptan Hydrobromide.

The solvent implemented for estimation of Eletriptan Hydrobromide was water. The λmax was found to be 221 nm.The area under curve of UV spectrum between 216 to 226 nm. The method is validated according to ICH guideline Q2(R1).

The developed method can be implemented for routine analysis of Eletriptan HBr in bulk as well as formulation as per ICH Q2 (R1) guidelines.

The standard stock solution of Eletriptan Hydrobromide was prepared by dissolving accurately weighed 10mg of the drug in water and diluted to 100 ml with same solvent to obtain a final concentration of 100μg/ml.

The standard solution of 10μg/ml was scanned between 400 nm to 200 nm in UV spectrophotometer against water as blank after baseline correction. Wavelength range was selected around wavelength maxima (221 nm). Different working standards were prepared between 5-25 μg/ml. Various wavelength range were tried and final range between 216-226 nm was selected based on linear relationship between area and corresponding concentration.

The AUC (area under curve) method is applicable where there is no sharp peak or when broad spectra are obtained. It involves the calculation of integrated value of absorbance with respect to the wavelength between the two selected wavelengths λ1 and λ2. Area calculation processing item calculates the area bound by the curve and the horizontal axis. The horizontal axis is selected by entering the wavelength range over which area should be calculated.

VALIDATION OF THE METHOD

The method was validated in terms of linearity, precision, Sensitivity, repeatability and ruggedness, accuracy.

The linearity was determined by using working standard solutions between 5-25 μg/ml. The spectrums of these solutions were recorded and area under curve was integrated in wavelength range 216-226 nm. Calibration curve of Area under curve vs. Concentration was plotted after suitable calculation and simple linear regression was performed (Figure 1). Regression equation and correlation coefficient were obtained. The range of solution has been decided according to statistical parameters of generated equation.

The sensitivity of measurements of Eletriptan Hydrobromide by the use of the proposed method was estimated in terms of the Limit of Quantification (LOQ) and Limit of Detection (LOD). The LOQ and LOD were calculated using equation LOD = 3.3 × S.D. /m and LOQ = 10 × S.D. /m, where, ‘m’ is the slope of the corresponding calibration curve.

Ruggedness of the proposed method is determined for 15 μg/ml concentration of Eletriptan Hydrobromide by analysis of dilution from homogenous slot by two analysts using same operational and environmental conditions.

The accuracy for the analytical procedure was determined at 80 %, 100 % and 120 % levels of standard solution. Area under curve was measured in the range of 216-226 nm and results were expressed in terms of % recoveries. Three determinations at each level were performed and % RSD was calculated.

Determination of Eletriptan Hydrobromide In Bulk

Accurately weighed 10 mg of Eletriptan Hydro bromide was transferred to a 100-ml volumetric flask and 50 ml water was added. After shaking for 2min, the mixture was diluted up to mark with water. From stock solution, correct dilution was taken in such a way that the final concentration is 100μg/ml. The concentrations of the drug were calculated from linear regression equations. The resulting solution was scanned on a spectrophotometer in the UV range 200-400 nm. The spectrum was recorded at 221 nm.

For analysis of commercial formulation two tablet of 20 mg Elitriptan hydro bromide was transferred to 100 ml volumetric flask 50 ml water was added. After ultrasonic vibration for 15 min, the mixture was diluted up to mark with water. The whole solution filtered using whatman filter paper no. 42. From filtrate, correct dilution was taken in such a way that the final concentration is 100 μ/ml. The concentration of the drug was calculated from linear regression equations. The resulting solution was scanned on a spectrophotometer in the UV range 200-400 nm. The spectrum was recorded at 221 nm.

The proposed method was validated as per ICH Guidelines. The solution of drugs was prepared as per the earlier adopted procedure given in the experiment.

The linear regression data for the calibration curves showed good linear relationship over the concentration range 5-25 μg/ml for Eletriptan Hydrobromide (Figure 1). Linear regression equation was found to be Y=0.7532x + 1.262 (r2 = 0.999). The result is expressed in Table 1.

The precision of the developed method was expressed in terms of % relative standard deviation (% RSD). These result shows reproducibility of the assay. The % R.S.D. values found to be less than 2, so that indicate this method precise for the determination of both the drugs in formulation. The results are given in Table 2.

Repeatability was determined by analyzing 15 μg/ml concentration of Eletriptan Hydrobromide solution for six times and the % amount found was between 97% to 101% with % R.S.D. less than 2. The results are given in Table 4. 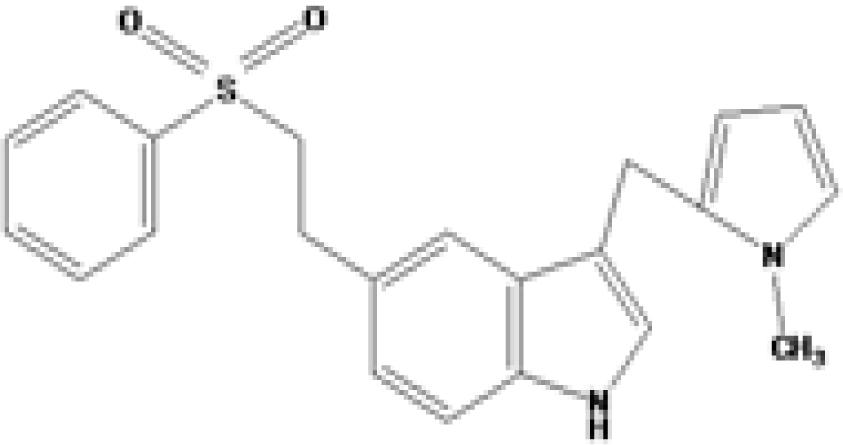 Analysis of Eletriptanhydrobromide in Formulation 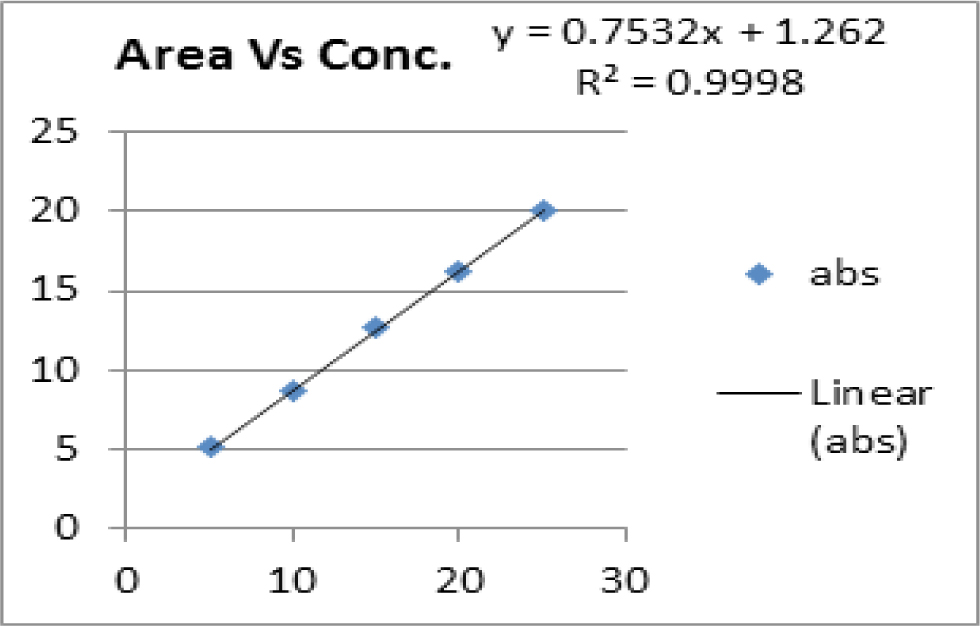 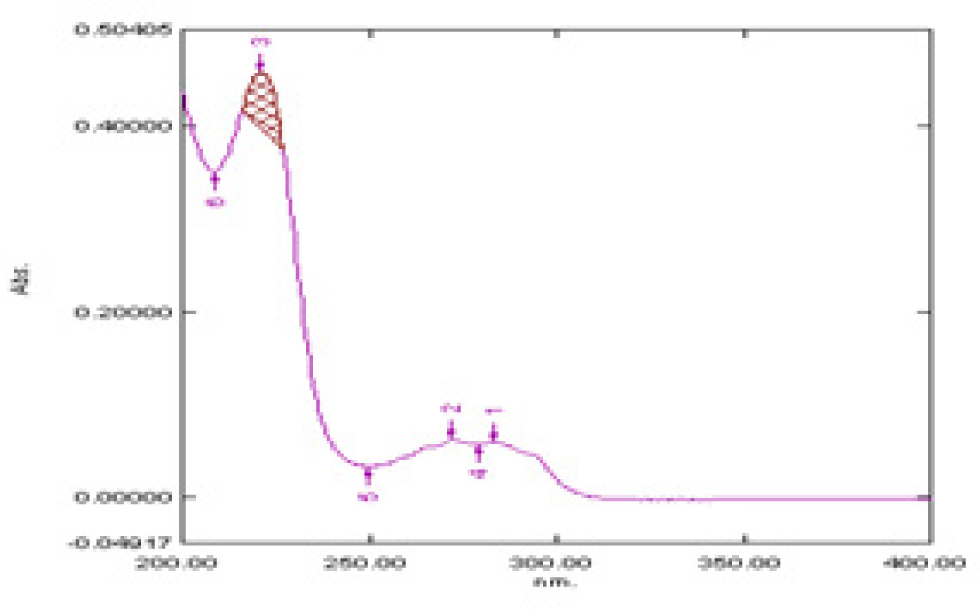 The solutions were reanalyzed by proposed method; results of recovery studies are reported in Table 2 which showed that the % amount found was between 97.00% to 101.00% with %R.S.D.>2.The results are given in Table 6.

The spectrum was recorded at 221 nm. The concentrations of the drug were calculated from linear regression equation. The % amount found was between 98.00% to 102.00%. The results are given in Table 7.

This UV Spectrophotometric method is quite simple, accurate, precise, reproducible and sensitive. The UV method has been developed for quantification of Eletriptanhydrobromide in tablet formulation. The validation procedure confirms that this is an appropriate technique for their quantification in the formulation. It is also use in routine quality control of the formulation containing this entire compound. 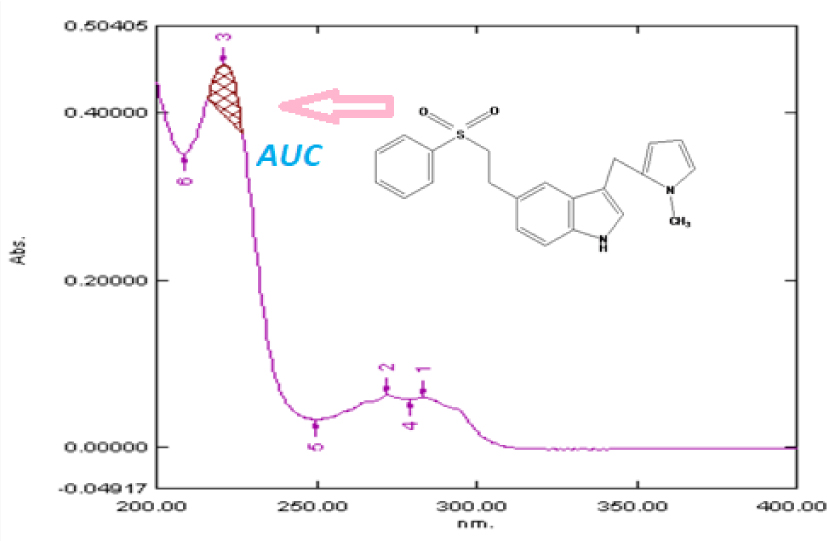 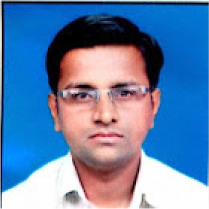 [2] Conflicts of interest CONFLICT OF INTEREST The author is not having any conflict of interest associated with this work.

Ponnuru VS, Challa BR, Nandendla R , authors. Quantitative Analysis of Eletriptan in human plasma by HPLC-MS/MS and its application to pharmacokinetic study. Analytical and Bio-analytical Chemistry. 2011;401(8):2539–48

Jocic B, Zecevic M, Zivanovic L , authors. Study of forced degradation behavior of Eletriptan Hydromide by LC and LC-MS and development of Stability-indicating Method. Journal of Pharmaceutical and Biomedical Analysis. 2009;50(4):622–9